Pedestrian fencing in the median: jerry-rigged to stop jaywalking?

Sure, despite considerable improvements in the last two decades, the American urban environment is still much more pedestrian unfriendly than that in most other developed countries. But urban advocates all too often assert this with a certitude that, if we plumb beyond the generalizations, reveals that it isn’t always fair. Or even accurate. First of all, my experience in some of the former Iron Curtain nations suggests that they did not benefit from the half century of heritage preservation, post-war reinvestment, and diversified transit that one encounters in the various cities of France, UK, Spain, Germany, and so forth. This observation may seem bold and unfounded, but the empirical reality is clear: despite the fact that Central and Eastern European countries are, on average, less affluent, have lower car ownership, and historically have claimed a more central role for state-based planning, a quick trip to such cities as Budapest, Zagreb, or Tbilisi reveals an uncanny fondness for high-speed six-lane highways, often right through the heart of downtown. The latter of these three cities is the most hostile place for pedestrians I’ve ever seen in what we would call “the West.” Though often picturesque and boasting some charming views from a stylized ped bridge across the Kura River, the Georgian Capital also contains virtually no crosswalks, instead opting for dank, urine-stained pedestrian underpasses at the handful of intersections deemed busy enough to warrant them, while everywhere else it’s a leap of faith. You cross at your own risk. Even the most car-oriented cities of the US still feature better pedestrian accommodations than Tbilisi.

But the point of this article, as is usually the case, is not to explore foreign landscapes; it’s a venue for the American built environment, and it takes no small effort to deduce that the walking environment of many American cities—particularly those that boomed after World War II—remains substandard. Perhaps the most notable distinction between most American cities and their European counterparts (a distinction that largely includes Budapest, Zagreb, and Tbilisi) is that the relentless accommodation for the private automobile, combined with disinvestment that accompanied widespread suburbanization, left the average American urban center pockmarked. After decades of widespread demolition and relatively little replacement construction, huge gaps forced the distanced between commercial buildings well beyond walkable levels. Put more simply: much of the time, there’s just not enough crammed together in American cities to justify walking from A to B. It doesn’t help that what little downtown investment that took place in the final decades of the 20th century often still mimicked the development patterns of the suburbs, with a form and configuration better suited to access by vehicle than by foot. And even worse: some of the cities that boomed after World War II, into the suburban era—cities like Phoenix and Las Vegas—never had any walkable form to begin with. Meanwhile, in the 21st century, most American cities have improved considerably from their nadirs, largely thanks to heavy infill development and reinvestment. But many of the scars from a near complete abandonment of urbanism in the 1970s and 80s persist.

Anyone born after around 1995 probably has little memory of a time when you could shoot a cannon down the main street of an American downtown on a Saturday afternoon and hit nothing. Comparatively speaking, cities today teem with people, working and living in the same districts largely perceived as obsolete just thirty years ago. The American pedestrian environment has at least recovered to the level of those Soviet Satellite countries with their vehicular sewers wrapping around blocks of 500-year-old buildings. That said, it’s still not hard to encounter features deliberately fabricated to restrict pedestrian movement, including in some of our densest, most pedestrianized downtowns, like Chicago. Or we find highway markers in suburban settings that essentially imply that a pedestrian presence is illegal, despite the fact that nothing else characterizing the roads should overtly prohibit someone from walking along the shoulder.

A perfect example of one of these barriers is a contraption that spans much of Coastal Highway in Ocean City, Maryland: 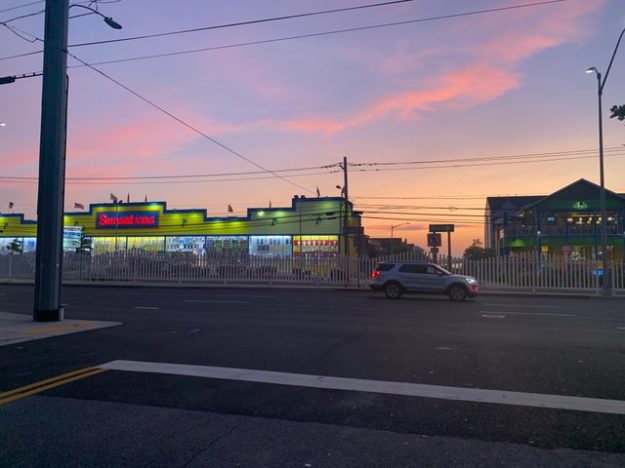 There it is, right in the median: a massive wrought-iron fence, making it dangerous if not outright impossible for pedestrians to cross. From my vantage point, standing at the minor intersecting 58th Street that intersects with the city’s north-south arterial spine (really its only road along that axis, the infrastructure offers no way for a pedestrian to make it to the gap between buildings, where the street continues on the other side of that fence. Approaching the fence a bit closer, it’s clear that the Public Works Department in Ocean City does not want anyone crossing. 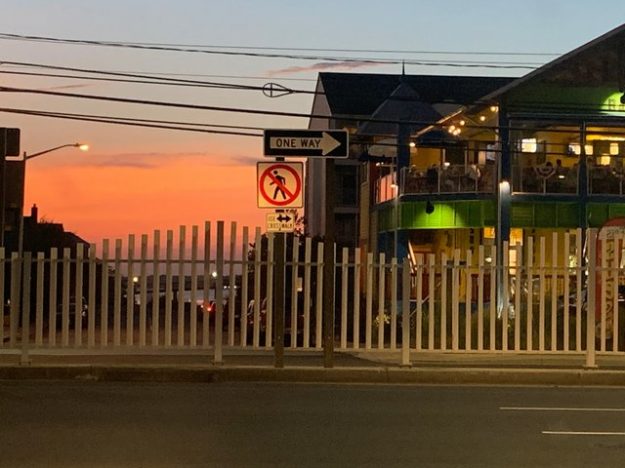 Underneath the “No Pedestrian” sign is a double-sided arrow instructing individuals to “Use Crosswalk” at the next intersecting street. But it’s a fair distance to get there; here’s the visual when pivoting to the right. 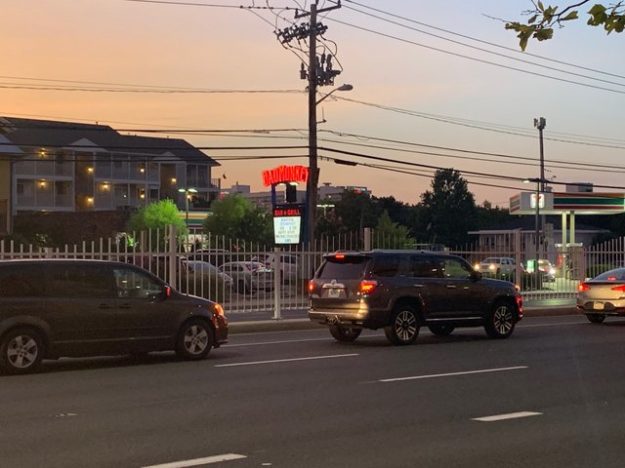 Pedestrians must walk to the stoplight at 59th Street to cross. Not exactly a huge onus, at least in that direction, but the next light is at 56th Street, leaving three blocks with absolutely no lateral pedestrian movement across the only y-axis on this 6-mile long, 1,000-foot-wide barrier island that gets jammed with over 200,000 visitors each summer, on any given weekend. And, judging from these Google Street View images from the spring of 2018, it’s a new installation.

I get it: the City has determined that a safety measure will deter vehicle-pedestrian collisions. It prevents jaywalking, which is generally illegal anyway, and, given Ocean City’s beach-party atmosphere, the odds that pedestrians are intoxicated is greater than usual. At this point, the city has only installed it on a particularly busy, accident-prone stretch of Maryland State Highway 528, between 40th and 62nd Street. Much of the far-north and far-south margins of this unusually axial municipality remain unfenced as of yet. So jaywalking persists in those areas. But they’ve made jaywalking much more difficult in the portion of the city where it apparently poses the greatest hazard.

More than a year after installation, the results seem to be mixed: accidents with pedestrians are down only slightly to the levels prior to fence construction, and while businesses acknowledge the fence improves safety, it’s also a visual impediment. The contents and façades to a business on the other side of the highway are hard to see, thereby curtailing business. Furthermore, many pedestrians still try for mid-block jaywalking; they get to the fence and realize it’s harder to traverse than they expected, so they walk in the busy street alongside the fence until they reach an aperture, which may be even more dangerous than conventional jaywalking. Locals and routine visitors lambasted the idea of the fence on social media, for its appearance, its cost, and for making Ocean City—probably Maryland’s most densely populated municipality for three months of the year—that much less walkable.

The City defends its approach: it’s about safety, and if it proves to reduce injuries or deaths by even 10% each year, it will be a success. But it will place this large, high-rise apartment dominated landscape at odds with the more human scaled beach communities of neighboring Delaware, which are going out of their way to be as pedestrian and bicycle friendly as possible, as I noted last week. And its impact is stark: while people are out on the streets (and especially the boardwalk), the sidewalks to Ocean City’s primary restaurant-and-retail arterial sees fairly light usage, given the astonishingly high population density.

The jaywalking prevention measure is a mixed bag: it promotes pedestrian safety by restricting pedestrianism overall. Placed in a larger temporal context, the irony is that Ocean City remained a pedestrian friendly destination during the low point of American urbanism; even in the 1980s, people would drive to the city, park their cars, and largely get around the north-south littoral axis on foot. These days, as pedestrianism becomes increasingly commonplace in all medium or high-density settings, we see more stringent laws and infrastructures preventing jaywalking and forcing access at intermittent crosswalks. And while it’s premature to assert that median fencing like this might become commonplace someday, I’m not holding my breath. Perhaps we must make peace with it: it’s still preferable to the leap of faith one has to take crossing a similar stroad in Budapest or Tbilisi.

2 thoughts on “Pedestrian fencing in the median: jerry-rigged to stop jaywalking?”