Age-restricted bicycling: double-wheeled rules for the single-digit phase in life.

As bicycling becomes an increasingly acceptable—and even fully integrated—mode of transportation, sharing our car-dominated streets, we should expect some enforcement of standards that better facilitate this integration. We’re not there yet—not even close. Plenty of heavily urbanized spaces have yet to acknowledge bicycling as a viable alternative to cars through the provision of infrastructure, even if only in the form of a delineating white stripe on the pavement. And websites like Streetsblog are there to remind us of how far we have to go. But most urban landscapes are vastly more advanced in accommodating bicycling than they were even at the turn of the 21st century. The awareness of a need to accommodate bicycles has permeated the American landscape.

Despite the normally vast distances between various destinations, even rural areas manifest their support for these bicycle-friendly initiatives. Across the Delmarva Peninsula, state highways routinely offer generous shoulders that make it much safer for bicyclists and even white-painted bicycle emblems that specifically designate these shoulders as such. While I expect that many of these bicycle markings are a product of the DOTs in Maryland and Delaware—rather than an initiative of county or municipal governments—they still represent a visible investment that is often difficult to find on the rural expanses in much of the country.

And, if one visits the successful beachside communities on Delmarva, the bicyclists are everywhere. Bicycling makes for a terrific, affordable alternative to beach access on the Delaware coast, where most communities charge fees not for entry to the beach but exclusively for reserving a parking space. If one has a bike and can strap a beach bag and foldable chair to one’s back, he or she gets a full day at the beach without having to worry about an expired parking meter. And then there’s the city of Lewes, Delaware (which I’ve covered once before), right next to Cape Henlopen, which separates the Delaware Bay from the Atlantic Ocean. The sidewalks of Lewes feature other markings I’ve never seen anywhere else. 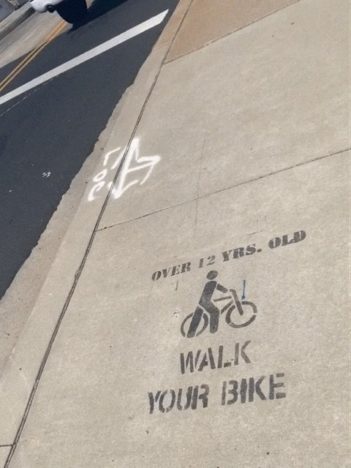 More often than not, we deprive children of certain privileges until they reach a certain maturity level (or body size) approaching adulthood: voting, driving, purchasing alcohol, and so forth. Age-restricted activities and purchases. Here’s a town that confers privileges on young people until they reach a certain age: they can ride on the sidewalks.

At first, I thought these stencils might reflect a condition unique to the bridge where I first encountered the restriction. 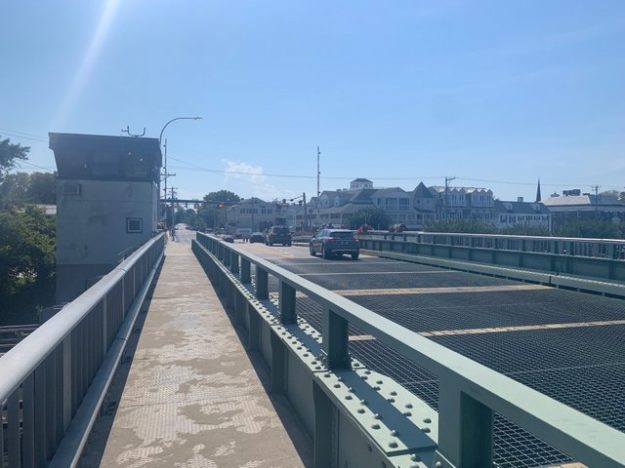 This Savannah Road bridge traverses the Lewes and Rehoboth Canal, which separates the mainland, historic portion of Lewes from Lewes Beach, all within the same municipal boundaries, though the latter functions more like a barrier island, due to the slice in the land that the canal creates. It’s not a bridge of any great size, but, like most bridges, the cartways are narrower and more restricted than they are on the paved version of the road, meaning less wiggle room for shared uses. And, as is the case with many bridges that involve no slope or change in grade, the primary supportive material is a sturdy metal grille. This surface can be disconcerting for a pedestrian or bicyclist, but the engineering is safe enough that no bike tire or human foot (besides perhaps an infant) would ever slip through. 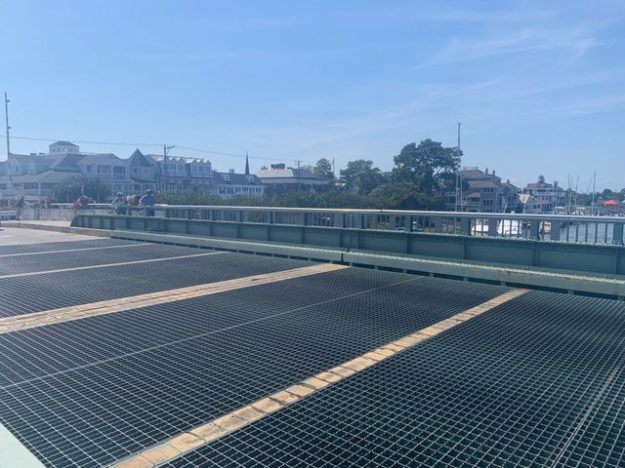 And it turns out the age-restricted bicycling on sidewalks isn’t limited to bridges in Lewes; it’s a citywide regulation.

So why do children get to bike on sidewalks when adults don’t? Generally we dedicate particular spaces for various transportation modes in the interest of keeping them separate because of the potential hazard they pose to one another. Bicycles and vehicles often must share the road, but the situation is sub-optimal, primarily because of the lethal hazard that the much heavier and potentially faster car can pose on a bicyclist. Continuing this reasoning, it is not ideal for bicycles and pedestrians to share a path, since a collision between the two is more likely to result in injury to the slower, more vulnerable pedestrian. So do the creators of Lewes’s Code of Ordinance think kids are more responsible than adults when biking on sidewalks, and they afforded them this age-restricted privilege? It doesn’t take a great deal of insight to deduce that children’s behavior is far more likely to be careless and erratic, and bicyclists that behave erratically on sidewalks are precisely the reason many municipalities have chosen to restrict—and often enforce—bicycling on the pedestrian path.

An added level of context, however, may help explain the reasoning behind this children’s privilege. The same lack of impulse control and extreme ego (low regard for the physical presence of other people) we witness in children—characteristics that tend to diminish as they grow older—are precisely what make them dangerous on sidewalks, but they’re a far greater hazard on car-filled streets…again, not to the motorists, but to themselves. Their small stature and complementarily small bicycles reduce the likelihood that they will move quickly and enhance their vulnerability. Bearing this in mind, it is reasonable that municipal code would want to foster an age-restricted environment that encourages biking among children but gives them an added layer of protection. And while it is more likely that a child bicycling on a sidewalk will carelessly careen into a pedestrian, it is less likely they would hurt that pedestrian than an adult bicyclist would.

Nothing I have detailed here requires particularly sophisticated thought. It’s just that most choose not to think it. But by asking the question—why do kids get to bike on pedestrian paths while adults should not?—I at least identify the problem enough to articulate it, as well as a potential rationale for why this age-restricted law might still achieve an end result of harm reduction. Perhaps a better analogy than the driving/drinking/voting ones I used at the beginning would be amusement parks, where one often has to be X’ tall to ride a roller coaster—but there’s a whole separate subculture of downscaled rides to appeal to the under-50 crowd. Pounds, that is—not years.

2 thoughts on “Age-restricted bicycling: double-wheeled rules for the single-digit phase in life.”