Tad’s on Powell Street: Putting a stake in the heart of a once-mighty restaurant chain. 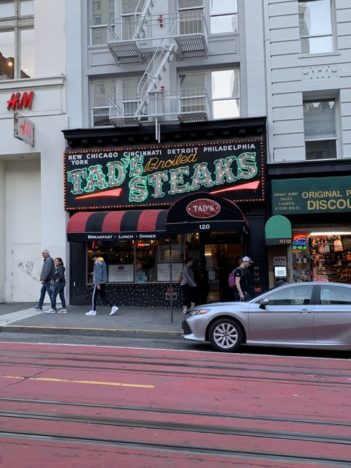 Those of you who might have read my old article on aged commercial signage in urban areas might already know what’s coming. For the rest, you can probably figure it out: the vintage look is a signal that Tad’s Steak House has been here a while. It’s a dining institution.

But a few other features to this sign also stand out: the lesser one is the “broiled” in cursive, which signals to the culinarily inclined that this is not a fine dining establishment. A quick search on the history of Tad’s indicates that the restaurant, founded in 1955 or 1957 (I’m getting mixed signals), intended to cater to blue-collar diners by offering a thinly-sliced, hastily cooked beefsteak and generous side dishes at an affordable price: the cheapest meals in the early days started at $1.09. While a market still exists for affordable steakhouses, it’s rarely the type of outlet that people are seeking in a sumptuous urban setting like Union Square in America’s most expensive city. Budget steaks tend to linger in more suburban settings, further suggesting that Tad’s is part of a fading tradition. And even then, the super low-budget steak chains are similarly scarce. How easy is it to find a Ponderosa or Sizzler these days?

But the other clue on this neon sign is a strange one: look at all those other cities listed. Is there a Tad’s Steak House in Philadelphia, Detroit, Cincinnati, or Chicago? Having lived in or around three of these four cities, I can at least assert that they don’t ring a bell, and a quick search online indicates that no Tad’s exists at any of the more inland locations. The only other remaining Tad’s is in New York City, near Times Square—an area as replete with tourists as Powell Street in San Francisco. But the Tad’s in Manhattan—where the tradition began—is the last one remaining, another location nearby closed several years ago, and the sole survivor on the East Coast doesn’t even seem to have a website. But that one enduring location does still offer that thin, grisly wedge of meat at an inordinately reasonable price by Manhattan standards (a mere $9.09 earlier this year) and no doubt evokes nostalgia among the city’s older generations.

Tad’s was a steakhouse chain long before Ruth’s Chris or Outback where ubiquitous—it might have predated the use of the word “chain” in this context. It surged in the sixties, when the cafeteria style approach appealed more to mainstream middle-class tastes, offering eight locations in NYC alone, with 28 spread across various other parts of the country, including the cities listed in the Powell Street signage. To this day, the Manhattan location offers dessert trays with plastic-wrapped plates, Jell-o cups in stemware, and Tiffany-inspired lampshades presiding over each table. It’s a hybridization of the highbrow and lowbrow where each nullifies the other, resulting in a middlebrow stalemate that just isn’t fashionable except as nostalgia. The Riese Organization—a restaurant and real estate management company (that also strangely lacks a website)—owns the last of the Tad’s Steak House locations, which lurks well under the shadow of such higher profile franchises aggregates as TGI Fridays, KFC, or Nathan’s Hot Dogs. And it appears to be letting Tad’s limp along, appealing either to budget-conscious tourists or its dwindling but loyal long-term customer base. 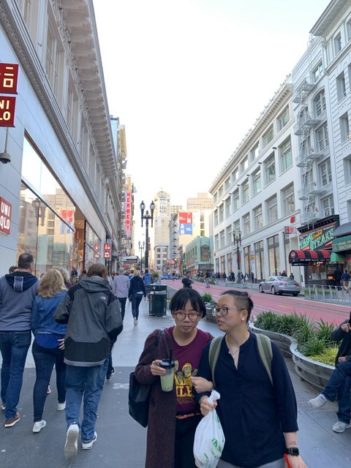 The Tad’s Broiled Steaks sign in San Francisco should serve a beneficial purpose: signaling (often unconsciously) that the place has stood the test of time. But only one of the other five cities’ locations has lingered on, yet the sign carelessly flaunts them. All it takes is a Detroiter or Philadelphian visiting Powell Street and San Francisco to state: “Wait—we don’t have one of those around where I’m from anymore.” After quickly putting two and two together, they can conclude what I had done before committing to any real research: that Tad’s Steak House is most likely in its final days, soon to devolve to an obscure memory almost as faded as the notion that Chicago once featured a similarly splashy Tad’s neon sign. The restaurant’s only chance of a revival? The hipsters decide that broiled steaks, no doubt served alongside casseroles, are a thing once again. And I can guarantee they’ll serve their Jell-o in stemware, at a far greater cost than a full meal at Tad’s back in 1955 (or 1957).

PrevBaptism by asphalt: how Emmanuel Episcopal handles its parking predicament.
Primm, Nevada: an oasis where the only green comes from the color of money.Next

20 thoughts on “Tad’s on Powell Street: Putting a stake in the heart of a once-mighty restaurant chain.”