Primm, Nevada: an oasis where the only green comes from the color of money.

More than a few times, I’ve captured the clever ways that the free market intersects with government regulations at key political boundaries, usually those with powerful differences (something more than just a township or municipality) but not so carefully monitored that it stops the flow of traffic, as would be the case through customs at an international crossing. In other words, state lines routinely offer interesting opportunities for one state to offer an abundance of a certain a good or service that the other state either prohibits or taxes to death. It might be fireworks, or cigarettes, or adult movies.

In the case of the Nevada border with California, it’s probably all of the above. In the first few decades after admittance to the Union (in 1864), the Silver State was the most sparsely populated and gained a reputation for permissiveness that it retains to the present. Nevada is where people go for easy gambling, impulsive marriages, no-fault divorces, and largely unregulated prostitution. Folks from the West Coast, therefore, won’t be particularly jolted by the emergence of Primm, Nevada, but it’s shock to those of us who don’t know the lay of the land. 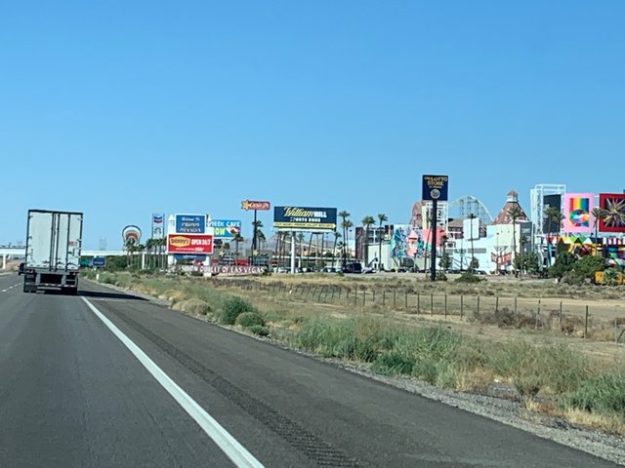 There, amidst the sun-baked monotony of the High Sierra and Mojave Desert, a microtropolis emerges. Most recent Census estimates place the unincorporated community of Primm at barely above 1,000 inhabitants, but within the context of its surroundings, it feels like a mercurial settlement—a caravan that decided to park itself between two mountains. A Burning Man Festival for the mass-market crowd.

And it looks enormous. Perhaps it requires a photo at greater distance than I can provide—an image courtesy of Google Street View—to fully capture the stark contrast between the California desert and this goofy commercial assembly sprung out of nothing. It’s far more distinct than the discount cigarettes one encounters after crossing the Delaware River into Pennsylvania or the Potomac River into West Virginia. After all, in both of those instances, one witnesses light rural development on both sides of boundary line. But here, the California side is completely uninhabited, while on the Nevada side, Primm is a jumble of infrastructure at an otherwise equally austere Interstate 15 exit ramp. A closer look helps reveal this: amidst the artillery of highway-scaled signs and non-native palm trees is a lower-lying “Welcome to Nevada” placard. It almost gets buried, but it doesn’t matter: of course this is the entrance to Nevada. 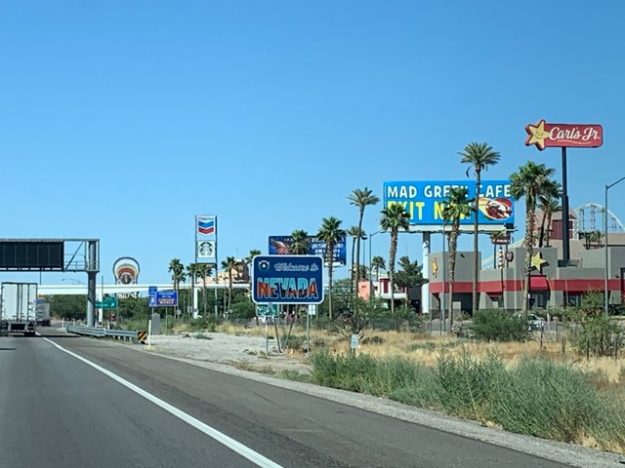 Primm previously used the name “State Line”, but that undoubtedly proved confusing with another unincorporated Nevada community “Stateline”, up near Reno and Lake Tahoe. In the mid-1990s, authorities in the state worked with the Secretary of the Interior and the United States Board of Geographic Names to change the community to “Primm”, after Ernest Primm, one of the earliest developers—a man who purchased 400 acres of land at the boundary back in the early 1950s, using the strategic location before and during the development of Interstate 15 to offer a much-needed oasis featuring a two-pump gas station, a bar, and a snack counter which he called Bordertown. Apocryphal sources indicate that the conversion of I-15 into a limited access highway forced Primm to make several, initially unsuccessful appeals to get an exit ramp constructed at Bordertown/State Line; he eventually persuaded Nevada DOT and US Highway Administration to relent. By the 1960s, the federal government deeded Ernest Primm an additional 400 acres, and, in the 1970’s he built a tiny casino/motel that eventually became Whiskey Pete’s, named after the 1920s-eta entrepreneur Pete MacIntyre, who legend indicates supplemented his borderland gas station’s profits with bootlegged whiskey, always readily available in notoriously libertine Nevada.

Ernest Primm died in 1981, but his children carried on the tradition by expanding the gaming capacity in the area, starting with Primadonna in 1990 (now called the Primm Valley Resort and Casino), followed by Buffalo Bill’s a few years later, the latter of which includes a kid-friendly element in the form of a log flume and roller coaster, barely visible in the photo below. 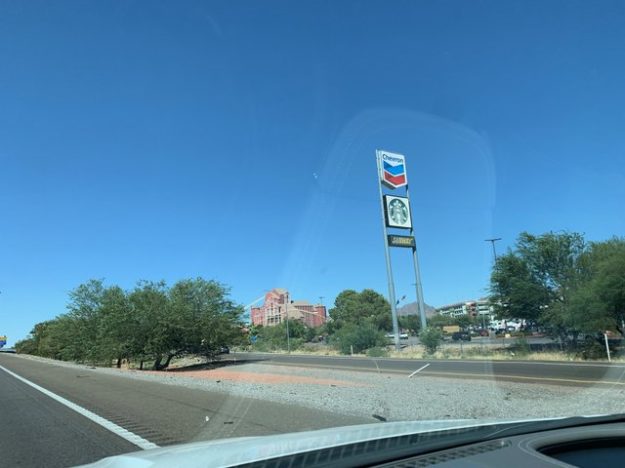 Today, with three casinos, numerous convenience-style restaurants, and the Fashion Outlets of Las Vegas, Primm has attracted enough service workers to justify the construction of multifamily housing (the Desert Oasis apartments), despite the fact that it lacks a post office, a school, or any discrete government. After all, it remains an unincorporated town, capitalizing on Nevada’s relaxed gaming laws, and providing a quick recreational getaway for people who can’t manage the remaining 40-minute drive to Vegas (or for people who want another stab at the poker tables on their way back to metro Los Angeles). 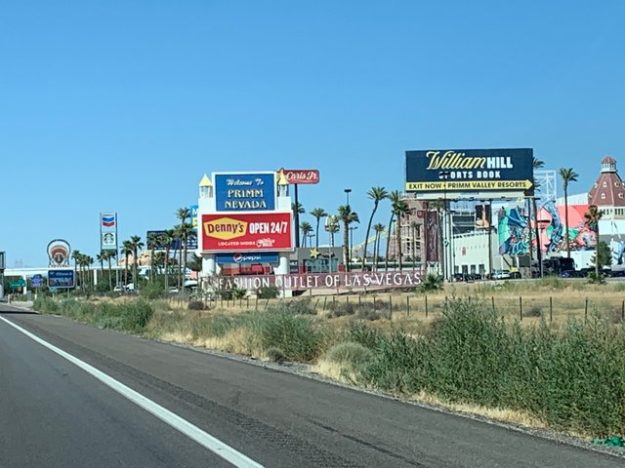 Like other border communities Laughlin, Jackpot, and Stateline, Primm is a contrivance borne exclusively out of demand for services that the laws prohibit in the nation’s most populous state. If California ever were to legalize commercial gambling outside of its Indian Reservations, it’s hard to imagine what might happen to the dusty exit ramp everyone calls Primm. Then again, one could ask the same question about Las Vegas. And the talents that perpetuate the mystique of Sin City—always reinventing itself in response the shifting tastes for entertainment—would be ready with an answer.

PrevTad’s on Powell Street: Putting a stake in the heart of a once-mighty restaurant chain.
Smutty suggestions through shed sales. Because why not?Next

9 thoughts on “Primm, Nevada: an oasis where the only green comes from the color of money.”