The pocket park: does a mega city need a mini playground?

The caliber of playground amenities in our urban parks has improved and diversified considerably in recent years. I can remember when I was a child: it was typical for each piece of equipment to sit in isolation, almost forcing the kids to decide between playing with one another or engaging with the equipment and making it harder for parents to monitor it all. The status quo was for every slide or merry-go-round to languish in graffiti or (more common) scratchiti that taught me words that I should have learned with some context or guidance. And of course, the veneer of rust that assured at least one saddle-swing was broken was the least of our worries; if anything, it was precisely because of playground equipment that parents hustled their children to the doctor for their tetanus shots. Perhaps I’m hinting at a childhood where public resources toward playground equipment were paltry, and other places with better-funded parks & rec departments fared better. But it didn’t really matter: I lived to tell about it, and, lacking better alternatives from which I could compare, it was still fun.

In 2019, residing in one of the most affluent metros in the country—and one where a considerable portion of the park system benefits from not just the city but the entire nation of taxpayers (many urban parks around me come courtesy of the National Park Service), the recreational amenities really do surpass everything I naïvely loved as a kid. But the generous funding for parks in both the District of Columbia and its wealthy Virginia/Maryland suburbs also fosters a complacency that borders on carelessness. Case in point: this pocket park is but one of the many features to spring up within the last five to ten years at the new Potomac Yard redevelopment on the north side of Alexandria, Virginia: 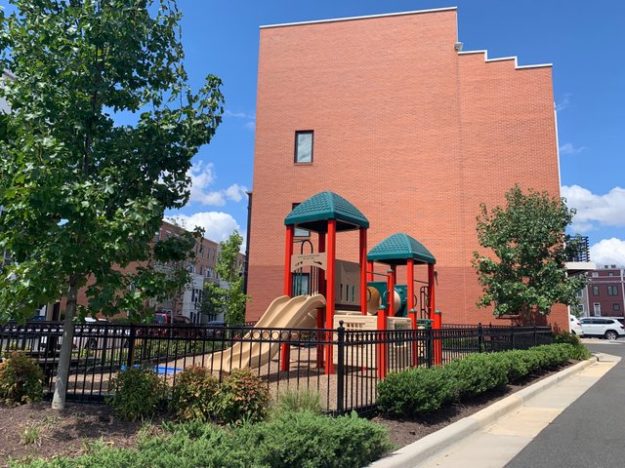 Another angle should clinch that there’s little more to it than the the installation within the perimeter fence: a few slides, some climbing bars, a few tunnels, some canopied perches, and a spinning tic-tac-toe set. 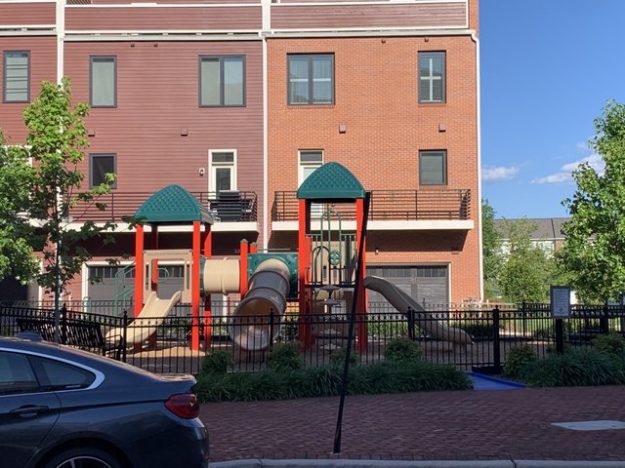 This playground would strain to appeal to children over the age of six. But it looks tidy, unsullied with graffiti, and in good working order. Perhaps it owes these characteristics to a strong supervisory body—either the management company affiliated with Potomac Yard (if it’s a private park) or Alexandria Parks and Recreation (if it’s public). But I have another guess: this playground looks great because it goes almost completely unused.

I’ve written about Potomac Yards at least once before: it’s a massive conversion of an old rail yard that closed in the late 1980s, then sat in polluted desuetude for a few years awaiting cleanup. After the EPA classified it as a Superfund site, it received the dedicated funding necessary so that private real estate interests could take advantage of its marvelous location within the DC metro (just south of Reagan International Airport) to develop it into multifamily housing, the pace of which surged in the early 2010s. And it’s still developing. The pocket park featured in the photo above is near the southern end of Potomac Yards, not far from Alexandria’s Old Town (the historic downtown). And, by almost every metric of a small playground I can think of, it’s a success: the colors are bright and appealing, the equipment is consolidated and allows for easy parental monitoring (or for dad reflexes to sweep in to avert a mishap), it’s well-maintained and in good condition (no doubt aided by the fact that it’s still new), and the materials are resistant to harsh weather or a variety of temperatures. Perhaps most importantly of all, the pocket park sits nestled within a dense array of townhomes that otherwise lack yard spaces large enough for a swing set. Here’s the housing immediately adjacent: 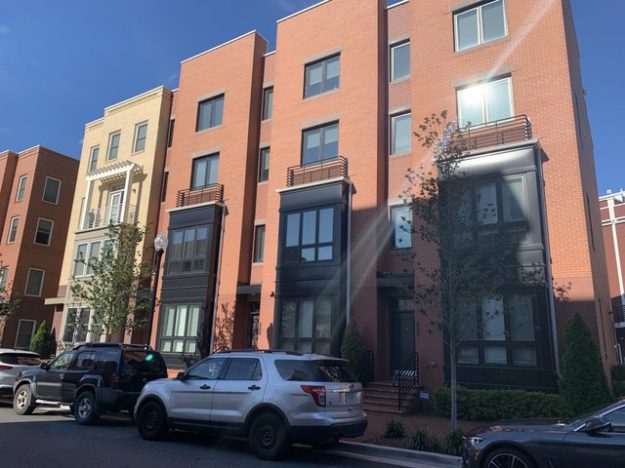 And here’s a streetscape: 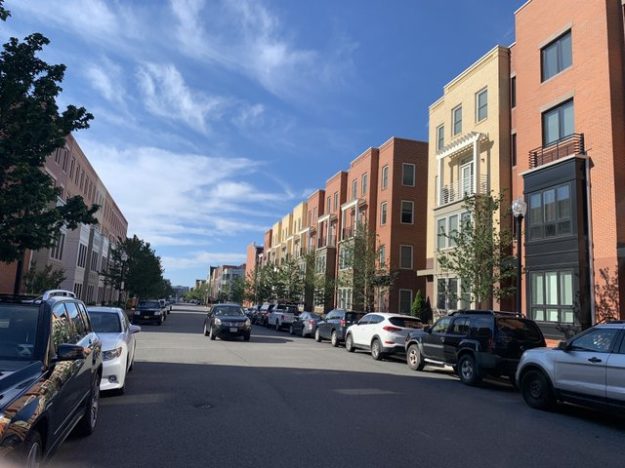 Needless to say, it’s a medium to high-density residential area, which, as long as it achieves a quorum of young children, should be exactly the sort of amenity the neighborhood needs to give it lasting appeal. But I’ve passed it multiple times, on weekends with unquestionably pleasant weather, and I’ve never seen a soul. Meanwhile, just a few blocks away, on the next parallel street just to the east, we witness this: 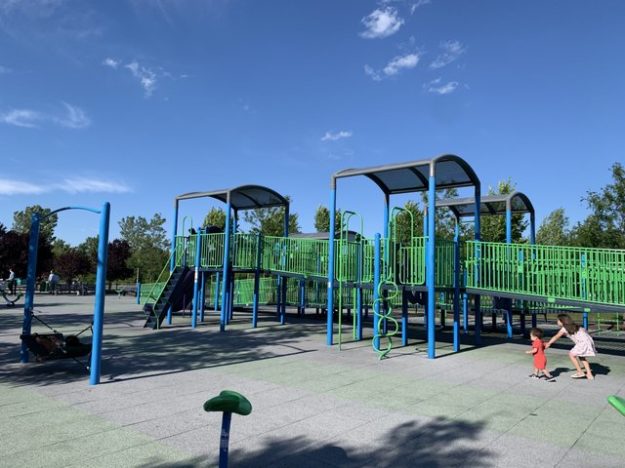 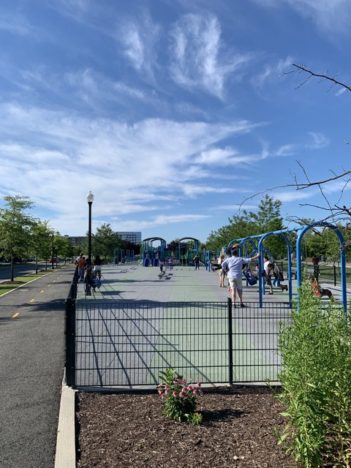 And that’s just the start. Aside from being at least ten (probably twenty) times larger than the pocket park I initially featured, this Potomac Yard Playground features a spray plaza, an interactive maze, two separate installations tailored to different age ranges, and tennis courts right nearby. The map below shows how these two playgrounds relate to the surrounding, mostly residential neighborhood. 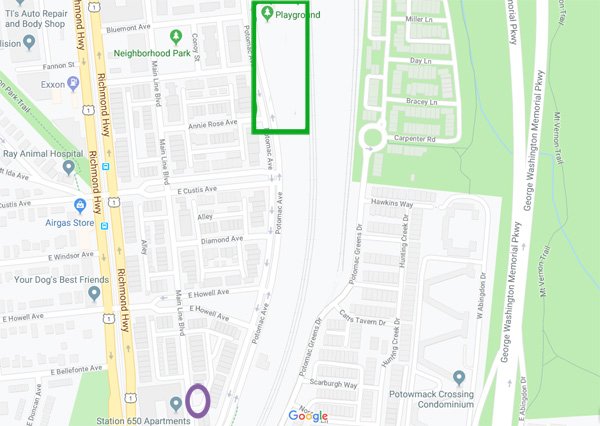 The tiny, neglected pocket park is circled in purple at the bottom, while the southern half of the Potomac Yard Playground is outlined by the green rectangle. The two playgrounds are within a five-minute walk from one other. 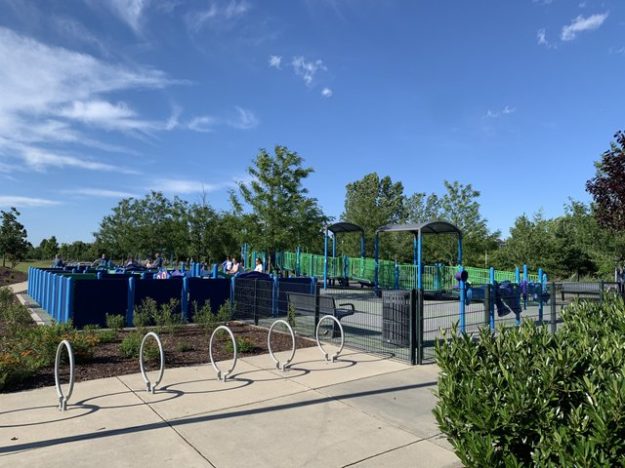 Needless to say, the smaller one can hardly compete. I struggle to think of a situation where the tiny pocket park would appeal to children. Perhaps for the introverted, wallflower toddler who prefers playing alone? For the paranoid parent who finds the larger playground too big and unmanageable? The pocket park has an added subtler disadvantage: it only fronts local streets within the neighborhood, while the larger park faces a four-lane collector road. Therefore, numerous people pass by the Potomac Yard Park each day—it promotes itself—while only the people who reside in the neighborhood (or know the residents) are likely to even be aware of the pocket park.

In the final analysis, the unused pocket seems borne out a bizarre paradox: it suffers from both a paucity of ideas and a deliberate, exhaustive overthought. From a site planning perspective, the developers ran out of inspiration for this small, triangular parcel. To some extent, this isn’t surprising: triangular parcels might yield the visually striking, flatiron effect in busy urban centers, but they’re rarely the most lucrative shape to transform into a residence. And this parcel lacks the depth to fit another townhome comparable to the residences that abut it, as seen in the aerial below: 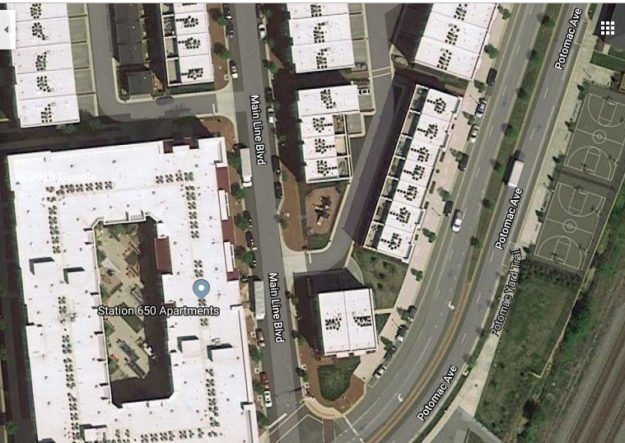 This residual land could offer the developers an opportunity to introduce a structure that hosts an altogether different, non-conforming use. While it’s possible that conventional, Euclidean, residential-only zoning regulation would impede the ability to add a small commercial/retail structure, it’s also obvious that the massive site was a bleak rail yard until the redevelopment that necessitated an environmental cleanup. If the City of Alexandria relaxed land use regulations by organizing Potomac Yard as a Planned Unit Development (PUD), it would have permitted all degrees of site planning flexibility, up to and including a microresidence built atop some first-floor microretail. And even if the City did not allow for a PUD, a mixed-use overlay district could have permitted something other than the uninspired default: a safe, dull, ignored playground, the sort of recreational use that would have been permitted anywhere. Though I’m sure the property managers promoted this park as an amenity, it’s not the highest and best use of land. And in a city and region that struggles to offer affordable housing, this pocket park—along with many others—could serve a far better purpose by offering the sort of tiny space that allows a homeowner or entrepreneur with more moderate equity to tap into this lucrative market.

So this pocket park owes its origins to a lack of inspiration. At the same time, however, other activist initiatives often force the hand of developers and cities. For example, the Trust for Public Land is an organization that seeks to ensure “that every person in America has access to a quality park within a 10-minute walk from home.” It’s a laudable ambition; who wouldn’t want more parks in our big cities? The Trust for Public Land has created ParkScore® as a benchmark that rates the 100 largest US cities on their provision of parks. It wisely creates criteria within its metric to account for the wide differences in settlement patterns among various cities: it awards parks differently based on acreage; it measures investment in terms of public/nonprofit spending and volunteerism; it assesses the specific amenities within a park (including playgrounds, restrooms and splashpads), and access using the ten-minute walk (half mile) rule. Lastly, it carves out a domain of need, based on population density, the presence of children 19 and younger, and the density of households with moderate or low incomes.

The finely wrought ParkScore metric has become a powerful tool for compelling cities both to add new parks and to invest in their existing systems. I do not doubt that our urban landscape is better for children than it otherwise might be thanks to the Trust for Public Land’s activism. But I cannot help but think back to my time in Cambridge, Massachusetts—a city not big enough to fall within ParkScore’s 100 largest but one that undoubtedly has designed its robust assortment of pocket parks based on the ParkScore methodology. Within Cambridge’s densely inhabited 6.5 square miles are dozens of mini parks, nearly all of which (from my experience) get as little use as this playground in Alexandria. While yards are small and multifamily housing is abundant, most single-family homes in Cambridge do at least sit on small plots of one-eighth of an acre or so—enough that they have a yard of their own, thereby rendering pocket parks redundant to at least half the city’s population. And Cambridge, like its neighbor Boston, faces a widely touted affordable housing crisis.

Controversial though it may be, I think broader ambition of cities like Cambridge and Alexandria to provide parks within a 10-minute walk of their entire population diverts their attention from greater needs, such as finding new ways to introduce alternative structures—accessory dwelling units (“granny flats”), microretail, even tiny homes—at these strategic parcels to open their communities to market-rate affordable housing or leasable space. Sure, a few pocket parks here and there are a drop in the bucket based on the overall need in expensive markets like DC and Boston, but they are unequivocally a better use than a neglected playground. Yet most cities are unwilling to weaken their widely touted ParkScore ratings (or their Euclidean zoning ordinances), even if it means sacrificing vital housing as a result. Most American alpha cities have spectacular park systems—that is in part why they’re alpha—but their affordable housing crises are growing by the day, and it is time they rethink the provision of all these playgrounds (especially when alpha cities are notorious for having lower-than-average percentages of children). And in Alexandria, our example here reveals two vastly different parks within much less than a 10-minute walk from one another.

Does that beautiful neighborhood installation of slides, monkey bars, and fireman’s poles get any use whatsoever? Or is it an elaborately landscaped micro-garden with nothing more to do than sit and read? (And who does that anymore?) If not, why try something else? Far too often, within the urban canvas, the pocket parks are little more than the white patches left exposed under the layer of paint. It’s time to get out the oils and the brush once more.

PrevSmutty suggestions through shed sales. Because why not?
Metrics for mallwalkers.Next

10 thoughts on “The pocket park: does a mega city need a mini playground?”