The cultural standards for commerce continue to evolve across the nation, to the point that shopping is no longer a peripatetic pastime. It seems obvious by this point that malls are bearing the brunt of this cataclysm. People still shop, but they don’t go shopping. Sure, there are plenty of sterile strip malls or shopping plazas, more than a few liquidated lifestyle centers, and at least one floundering festival marketplace. But the enclosed shopping mall left an indelible print on the American landscape, for better or for worse, and its cultural influence proved so profound that its encroaching demise has yielded a sub-genre of music, among many other things. (How many 1980s teen movies didn’t have a scene in a mall?)

It should come as no surprise that mall deaths yield a much more powerful impact on their surrounding community than the failure of even a large strip mall. For much of the second half of the 20th century, malls were the most enduring proxy for a town center—they exacerbated their demise in the 1960s and 70s—and while most historic downtowns and main streets are now enjoying a shaky but palpable recovery, the malls that exsanguinated them are in their death throes, online shopping (Amazon in particular) having driven a stake through their hearts. While most of us can still envision a mall that hosts a huge variety of the stores we have long known—and we can probably name that mall—odds are just as good that the first mall that comes to mind is one that is visibly declining, if not already mostly dead. And when was the last time we visited that hugely popular mega-mall? Odds are strong that it, too, is nowhere near as teeming with commerce as it used to be. After the closure of The Bon-Ton Stores in the first half of 2018 and the Chapter 11 bankruptcy filing for Sears Holdings Company in the second half, it is difficult to think of a mall that hasn’t suffered a grievous wound from the collapse of retail. I’d wager that the status quo in 2019 is for a mall to suffer at least one vacant department store anchor tenant.

As a result of this collapse, most malls perceived as second-tier (i.e., there was a bigger and splashier mall within a 45-minute drive) are failing. The mall I’m featuring today is no exception; I’ve decided to leave it anonymous since I may reserve most of my photos for a longer blog post. (It’s also uncharitable to devote such a short analysis to what could easily appear like mockery of a failing business.) Suffice it to say, it is in a lesser-known but fairly heavily populated patch of Pennsylvania. 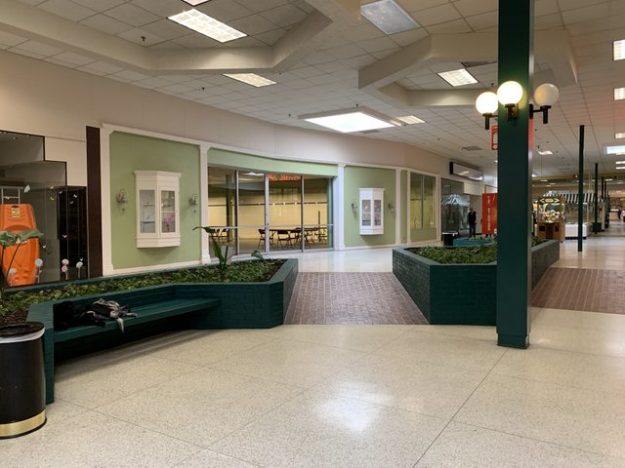 Okay, so this photo isn’t interesting anymore. We’ve all seen stuff like this. Dead mall pics are a dime a dozen; this blog alone has featured hundreds. But that degree of emptiness, combined with good lighting and climate control, tends to make for fecund environment for the unflappable mallwalkers. We’ve seen them in vibrant malls too, but mallwalkers tend to flourish best in the struggling ones. Still, never before this middling Pennsylvania mall had I seen something like this: 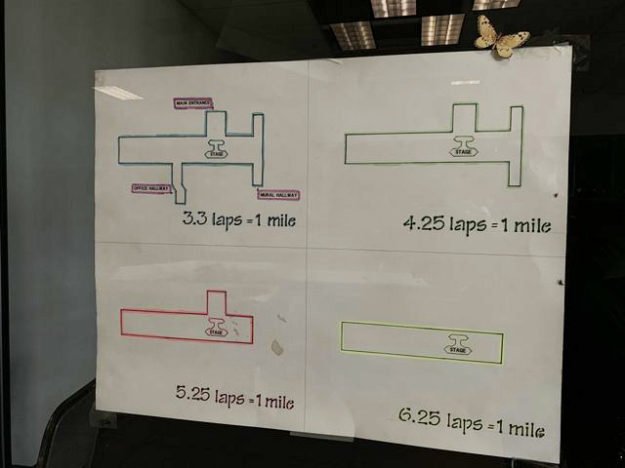 Yes, it’s a guide for mallwalkers, offering four different outlined paths of the mall for getting their mileage in. The management—or someone—at this mall has gone out of its way to measure the interior and accommodate them. It’s remarkable in its own way, because mallwalkers rarely if ever offer a great deal of financial benefit; they are not there to shop, and most of them, being well past retirement age, are on a fixed income. They are there for exercise.

Though mallwalkers lack any clout as consumers, they nonetheless contribute a sense of humanity and life to an otherwise staggeringly vacant large space. Perhaps a volunteer put the metrics and the sign together, but either way, the mall’s command had no problem putting it on clear display. The cost of measuring a course and placing this simple but legible sign may very well get recouped by the presence of cars in the parking lot and active people in the interior. And who knows: maybe a few will buy a Coke or a coffee, once in a blue moon.

I’m not sure which to anticipate more: an increasingly visible (and accommodated) mallwalking community or a massive onslaught of closed malls, thereby forcing mallwalkers to lace up their Naturalizers and find some other underutilized (but not abandoned), climate-controlled mega-space. What’ll it be? Sports stadia? Casinos? University student unions? We can only hope the management is so generous; after all, with our aging population, the mallwalking contingent is only likely to grow.

8 thoughts on “Metrics for mallwalkers.”