Multifamily monotony: how to put a new design spin on an all-too-familiar housing type.

While almost all urban aficionados have heralded the revitalization we have witnessed in downtowns large and small across the country, the sticklers and control freaks among us have continued to cavil about one nagging shortcoming: the form of mixed-use and multifamily projects has disproportionately favored big lots with monolithic structures that, while certainly better than the vacant lots or surface parking that they replaced, lack the richly textured visual interest of a series of small commercial buildings—that is, the typical main street. A row of narrow structures, usually ranging from between two and five stories, with retail on the first floor, is a configuration that served as the standard bearer for commercial nodes—and urbanism as a whole—in the nineteenth century, the era in which most American cities and towns emerged. And it continued well into the first few decades of the twentieth century, at least until after World War II, when conventional American downtowns began their precipitous decline. Fast forward seventy years, and while our downtowns are unequivocally revitalizing, the new infill structures are often fatter than they are tall, resulting in an imposing wall of sameness stretching from one street corner to the next.

If it’s not clear what I’m getting at, these images from Oregon should help. (I should note that I have chosen Oregon, despite it not being this article’s focal point, primarily because I was able to find strong photographic examples. But the rest of this case study takes place in Delaware.) What most of us would define as the urban archetype looks something like this– 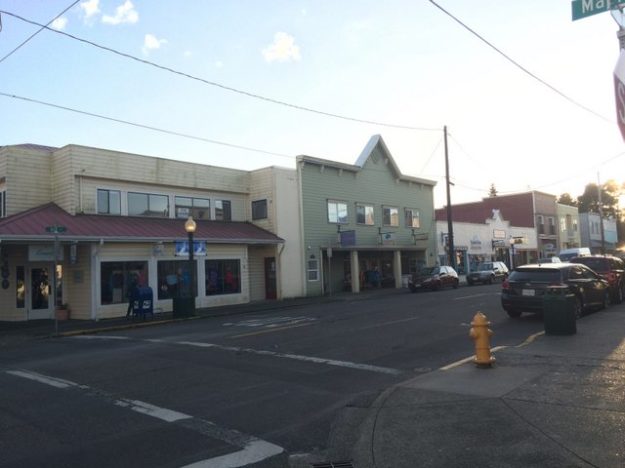 –at least when scaled to the appropriate proportions for a town of 8,500, as is the case with Florence, the coastal Oregon community in the example above. If we’re envisioning a larger scale, it might look more like this: 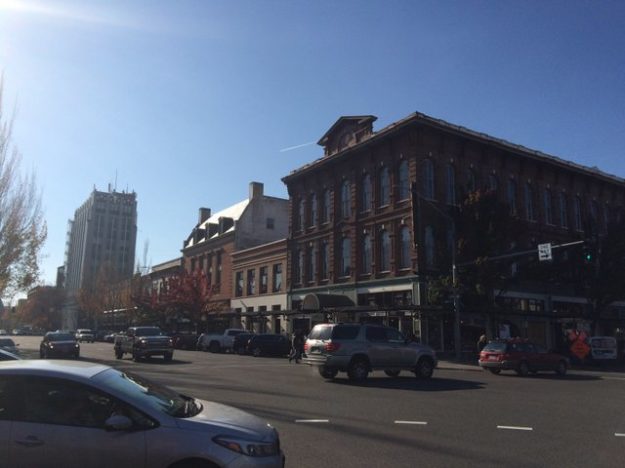 A typical commercial block in the state capital of Salem, population 170,000. Salem’s generally healthy downtown is enjoying a clear renaissance, but much of the infill comes in this form: 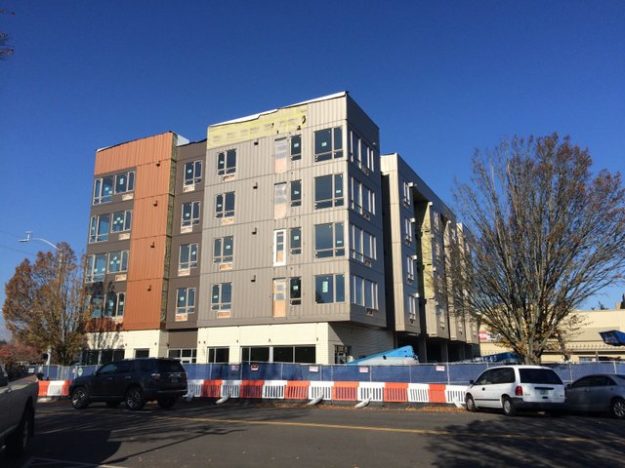 It really isn’t bad: it’s scaled at a density appropriate for a mid-sized city, and it looks like it will have retail on the lower level. But it’s hulking and overwhelming—one big thing to look at, while an older block would offer five things (buildings) across a similarly sized expanse. But this is far too often the characteristic we witness with urban reinvestment: a single developer may purchase an entire block, rescuing it from its economic nadir. In many instances, these urban blocks began as a) six small, narrow commercial buildings, then they b) declined and began to get demolished, then c) developers or the City converted them to off-street parking while ultimately d) consolidating those old parcels into one big surface lot. Finally, we get to e): a new edifice that retains the merged lots and stretches a large building from corner to corner. It’s certainly a better investment than the nearly vacant land that preceded it, but it’s getting naggingly predictable. Forty years from now, these multifamily citadels will signal the Era of the Return to Downtowns.   And they won’t offer near the visual interest of the more human-scaled buildings that predate them by 150 years.

Perhaps, at the very least, a few developers are bucking the trend? It sure seems like the college town of Newark, Delaware (population 32,000) is trying to offer something different. Sure, it boasts a lively main street, predictably catering to the college crowd with a surfeit of bars and fast-casual restaurants. 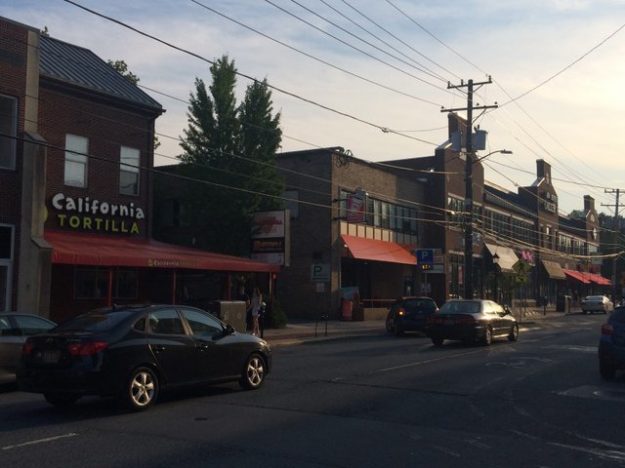 But it’s rare these days that a university encourages or even accommodates the students through dormitories for all four (or five or six) years of undergrad. The upperclassmen have to either relocated to those Greek houses or off-campus multifamily housing somewhere nearby. And Newark’s local multifamily housing market seems to have found a niche, just west of the Main Street and heart of the University of Delaware campus. 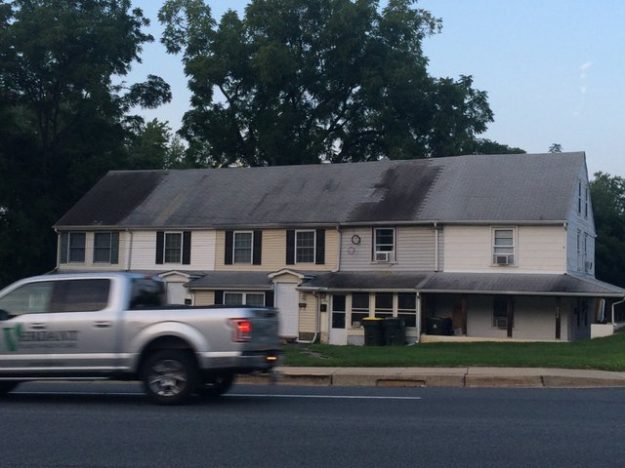 Pretty beautiful stuff, right? In their defense, these drab townhomes—which I’m going to go out on a limb and assume receive most of their leasing money from college students—at least can claim a reasonably variegated look. The entrances are discrete and each unit has a slightly different façade treatment: color, fenestration, ornamentation. In most respects, the look largely resembles the semi-attached or completely detached older housing on the opposite side of the street. 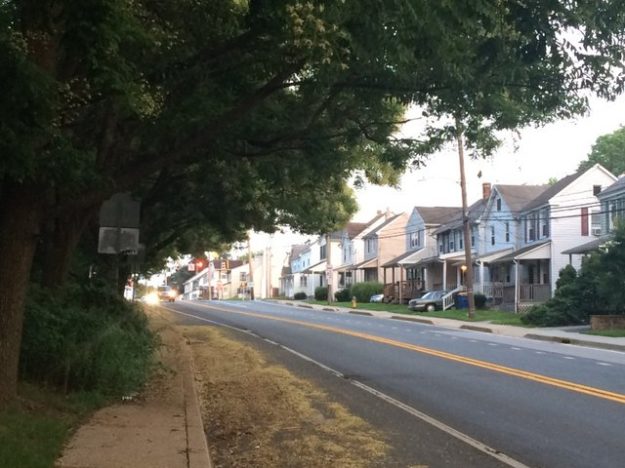 It’s not one long monotonous street wall; it’s a variety of differentiated dwelling units, some with porches, some with larger setbacks, some with driveways, and of course the variety in façades. But then, this photo captures at least six or seven distinct lots, most likely with separate owners. It’s not a strip of low-slung apartments or townhomes all constructed at once. In both respects—the townhomes and the apartments–it’s obvious that the units weren’t built yesterday, but they represent a sort of turn-of-the-century Mid-Atlantic vernacular that Delewareans (and southeast Pennsylvanians and New Jerseyites) know all too well.

Needless to say, it’s not the aesthetic for urban housing that’s in vogue today; down the street one encounters some much newer multifamily competition. 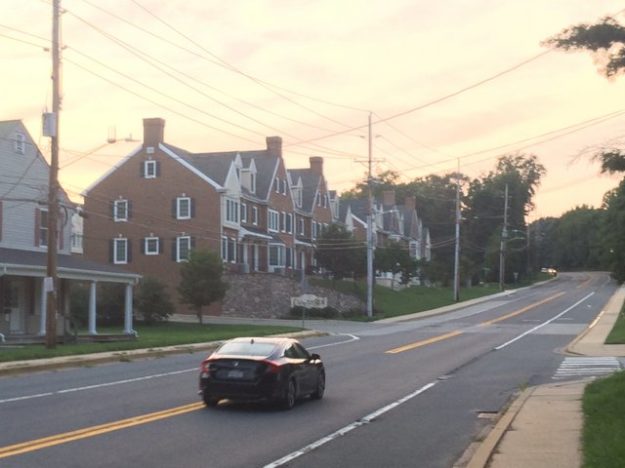 We can tell that the Campus Side Apartments are new not just by the impeccable condition, the whiteness of the trim, or the age of those sapling trees. It just looks new because the aesthetic is new. It’s a massive row of housing units conceived and constructed all at once, not unlike that five-story beast under construction in my one Salem photo (and completely unlike the row of small commercial buildings in my Florence pic). But instead of assuming an almost monolithic appearance, the embellishments and individuated entrances help distinguish the units. 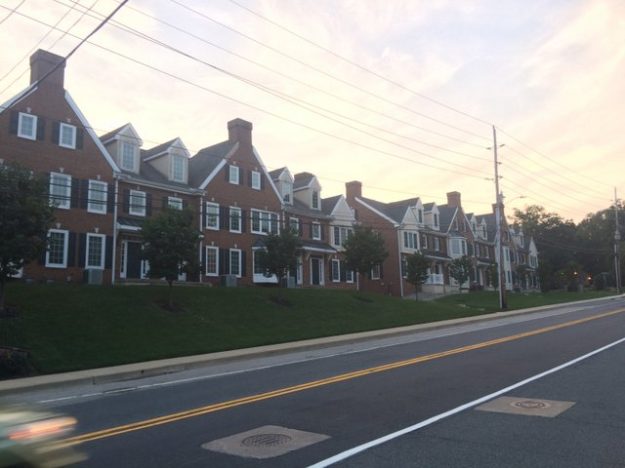 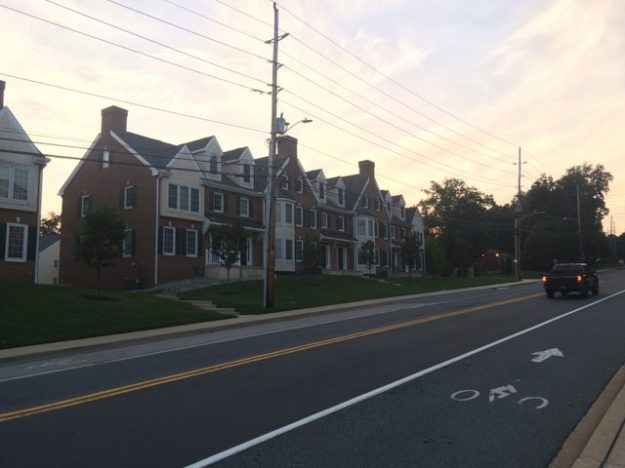 Note the different rooflines, the alternating gables, the dormer windows, the occasional interruption of the brick. All of it helps mitigate the monotony. I’ll concede that these structures in Newark use an archetype closer to a townhome, with a personalized entrances to the units, while the bulky example under construction in Salem is a multifamily apartment or condo building, almost certainly offering a single entrance to a master lobby. In contrast with the Campus Side Apartments in Newark, the Salem approach typifies construction in the 2010s, to the point that it may soon resemble an architectural cliché (if it hasn’t already).

I like this Newark example, but the colonial/Georgian architectural language is a familiar one, particularly common among multifamily architecture in the suburbs from the 1980s. Yes, the suburbs. (This should come as no surprise, since multifamily construction during the 1980s took place almost exclusively in the burbs. Downtowns were not a place most people sought to live.) Also in Newark, just a block away from the example above, I espied a superior—or even superlative—example of multifamily design. 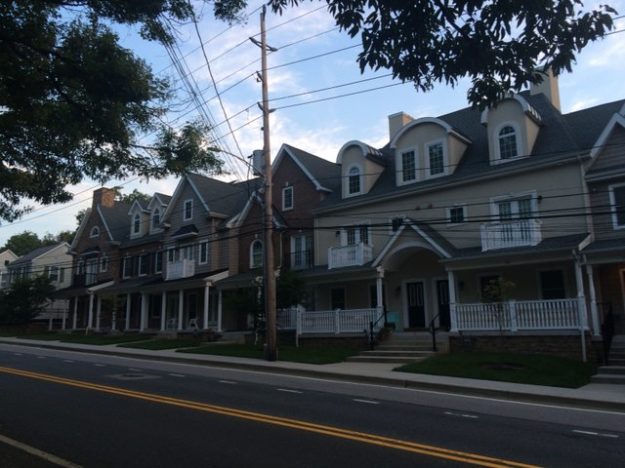 The utility wires are an unfortunate obstacle, but they cannot detract from the visual interest of these facades. The individual dwelling units in this row are considerably more variegated than the Campus Side Apartments were. 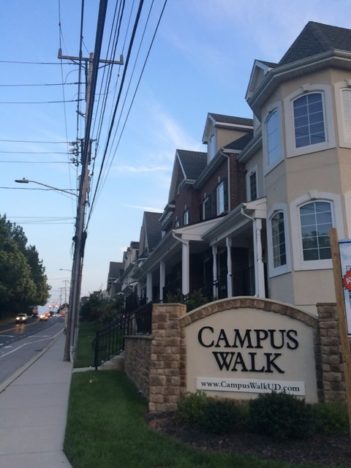 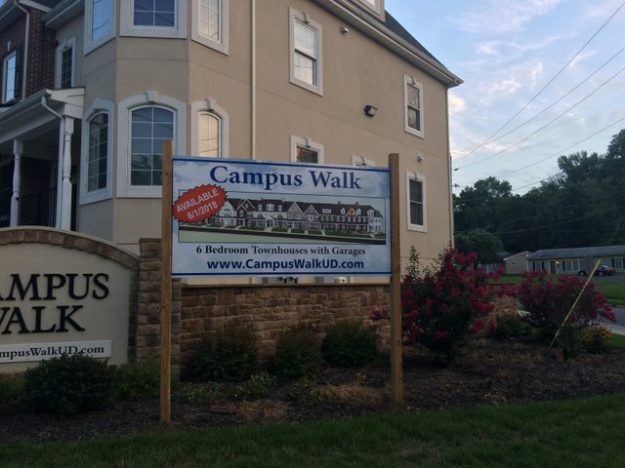 The sign featuring the name, Campus Walk, is a dead giveaway that these belong to a single development entity. But the untrained eye is not likely to sort out those details. After all, not a single one of the units is a facsimile. 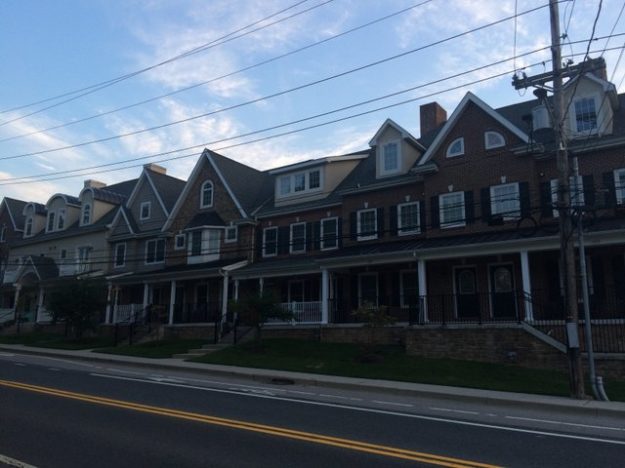 This level of differentiation is unprecedented among current developments. It allows these units—the website calls them “townhouses” even though they all require a lease—to blend fairly well with the century-old housing immediately to the east. 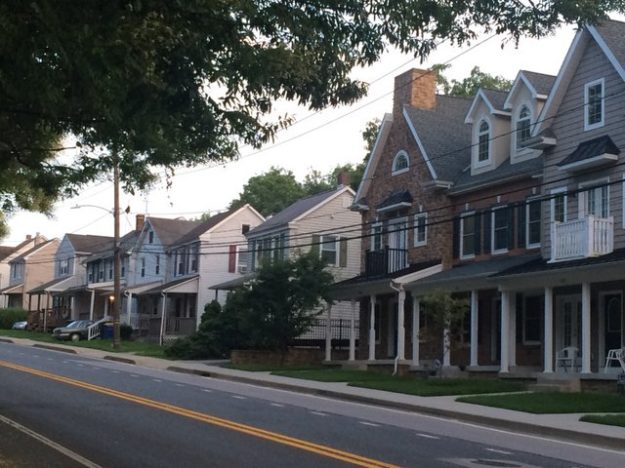 Sure, Campus Walk Townhouses are brand new; the units to the far left in the photo above are probably a century old. The building materials and the architectural languages are clearly different. 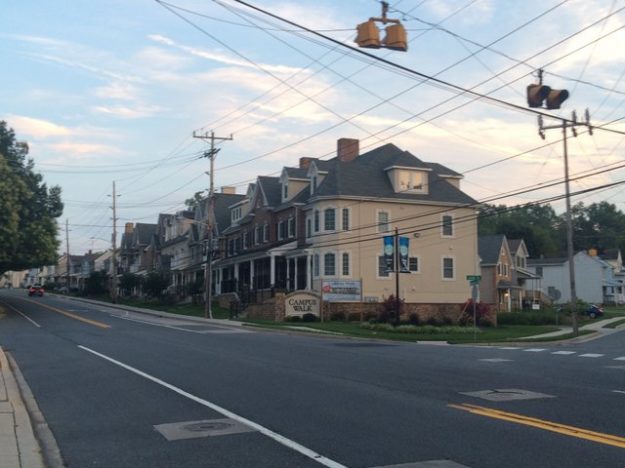 Both the old homes and the new Campus Walk Townhouses use a familiar, conservative vernacular, so the distinction isn’t jarring. And, at least judging from these façades, it does not appear that an architect dashed out the design in fifteen minutes. The multifaceted rooflines and gables help minimize the horizontality of the undertaking. Only from the back is it abundantly clear they are a unified housing entity. 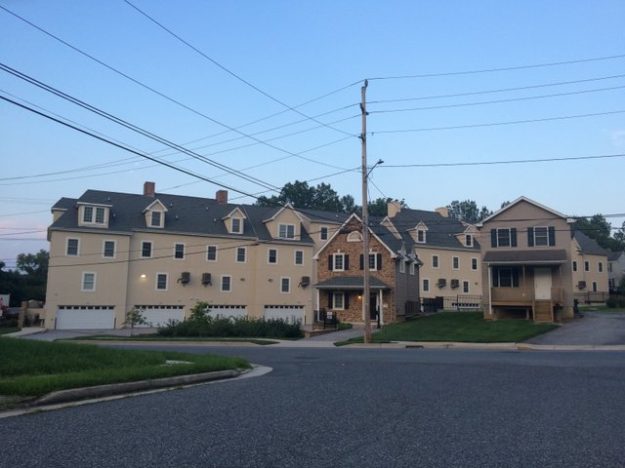 And the handsome little stone house in front of all these units is the brainchild. 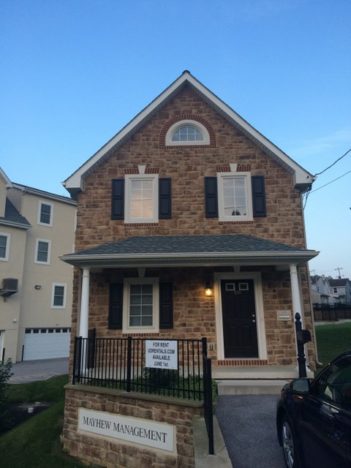 Mayhew Management conceived both Campus Side and Campus Walk, demonstrating a design sensitivity that I suspect will help these properties age well, precisely because they aren’t ultra-trendy. Little more than a block separates the two of them; in the photo below, Campus Side is in the far-right foreground, while the more variegated Campus Walk is there in the background. 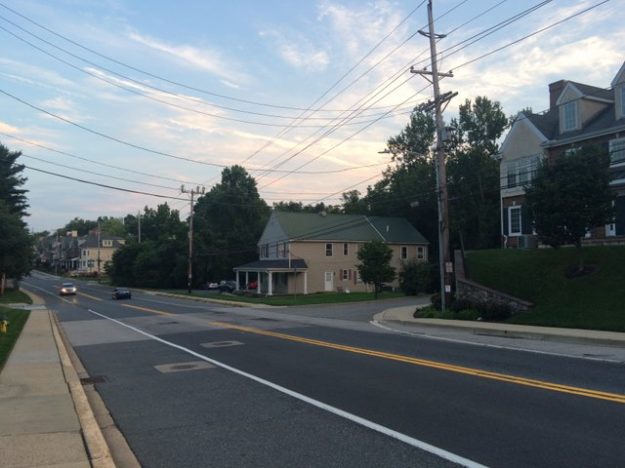 They don’t stick out like sore thumbs, and that seems to be the point. Rather than ostentatiously announcing their newness, Kevin Mayhew’s development approach is to avoid the monoliths demonstrated in Salem and countless other cities. Sure, it doesn’t quite look like the small-town main street of Florence, but it makes a conscious attempt to endow each housing unit with a personal touch—a characteristic that will keep it from screaming 2017 in two decades. Who knows—maybe 2017 will never carry the whiff of stigma. But I suspect that electric mini-scooters, tattoos behind the ear, and dress shoes without socks will someday seem as hilarious as all the well-hewn fashion details people love from Stranger Things. And at that point, who knows how we’ll view those boxy five-story downtown apartments?

8 thoughts on “Multifamily monotony: how to put a new design spin on an all-too-familiar housing type.”