Durham, the second largest city in North Carolina’s burgeoning Research Triangle, has historically underperformed economically, at least compared to Raleigh and Chapel Hill, but the progress I witnessed from a visit last fall compared to 3.5 years earlier certainly bespeaks the rapidly growing economy here and elsewhere across the Tarheel State. While in 2015, the reinvestment in a long-languishing city center appeared relegated to just a two-block long corridor, by this point it’s visible throughout downtown, up to and including a high-rise residential tower, visible in an inchoate state of construction on the left. 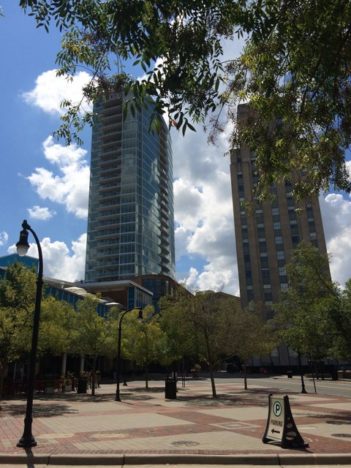 The tower is much more remarkable because these two buildings at this point comprise close to half of Durham’s skyline. With over a quarter-million inhabitants, it’s now the state’s fourth-largest city, but it was not a major player until the last generation or so. Only incorporated as a village called Durham Station after the end of Civil War, the prosperity of the Bull Durham Tobacco Company contributed to the town’s prosperity through the turn of the century, while the competing W. Duke & Sons Tobacco Company used its tremendous profits to rebrand the small Trinity College into what the rest of the world now knows as Duke University, a school that only marginally existed in its current form (and global prestige) prior to 1924. The same Duke family that amassed a fortune in tobacco also proved pioneers in electrification, harnessing energy from hydroelectric dams in western North Carolina under the name Duke Power (today Duke Energy), helping to electrify the small city (and much of the rest of western North Carolina) well in advance of much of the South, which in turn coaxed a textile industry formerly concentrated in New England to shift its operations southward.

Even given these mercantile and academic advantages, Durham did not explode in population until the last quarter century; it only eclipsed 100,000 people some time after 1970. And, even amidst this tremendous growth, the industries that helped put Durham on the map collapsed, but the eds-and-meds jobs spawned from the 1959 development of the Research Triangle Park just south of Durham quickly supplanted the blue-collar jobs with white-collar ones; to this day, the Raleigh-Durham-Chapel Hill Metropolitan Area has one of the highest concentrations of advanced degrees of any metropolitan area in the country. 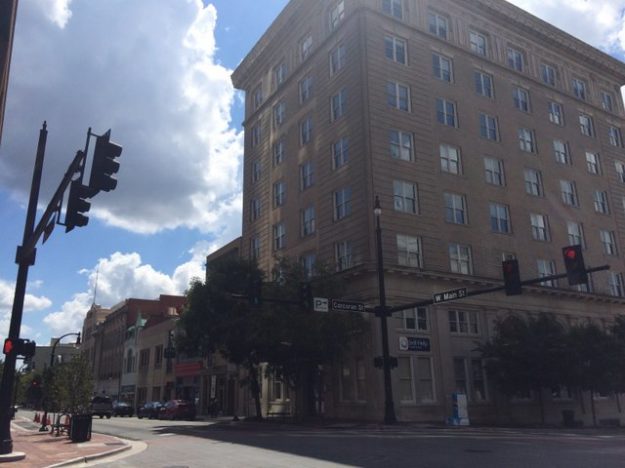 But most of the population growth came in the form of new housing on the fringe, leaving Durham’s older neighborhoods and its downtown to languish. During my last visit, it was easy to find façades that, judging from the signage, had sat in desuetude for a generation. In today’s Durham, such sights are rare: while one could hardly consider the entirety of the downtown active, it’s clearly on a revitalization trajectory that appears much faster and more confident than, say, Toledo. And no offense intended to my Toledo readers, but Durham and Toledo seemed to be regenerating at a pretty even keel a few years ago; the superior economic performance of this North Carolina metro reinforces the health of its downtown.

Sure, Durham’s hardly a fully revitalized downtown; it obviously didn’t have a lot going on during the late morning of Labor Day 2018 when I took these photos. But what’s remarkable about Durham’s progress is not the obvious stuff: the massive construction cranes or the miniscule eclectic retailers. Far more interesting is the handling of the remaining underutilized space, like this quiet corner. 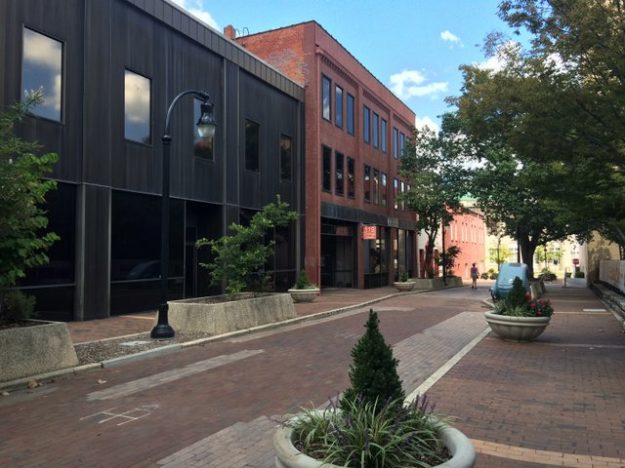 It’s a street scaled more for pedestrians, replete with reasonably tidy brickwork and mature shade trees. Orange Street may, in fact, have been a pedestrian mall; this Google Street view of the entire street section reveals the serpentine path common to those failed revitalization strategies from the late 1970s. Regardless, the photo above is deceptive. Shifting the camera’s lens to the other direction shows the other side of the street a bit more. 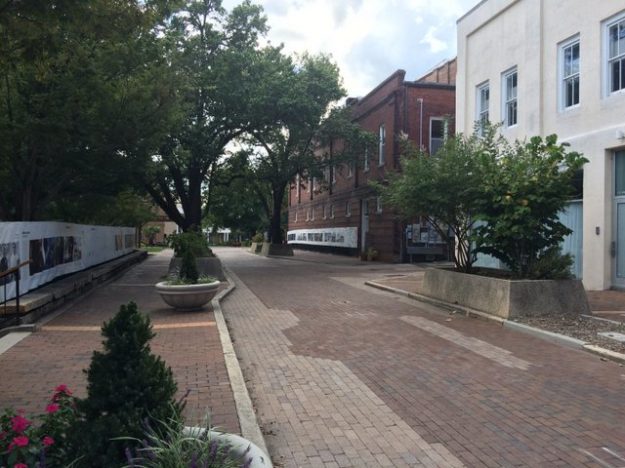 Up against the sidewalk is a fence made opaque through various interpretive banners. 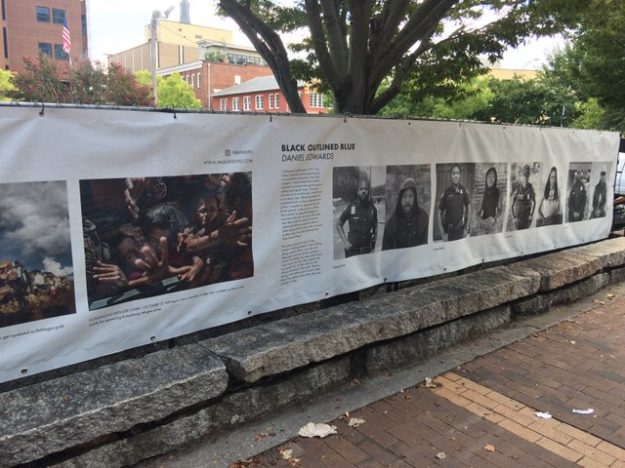 These banners feature displays and descriptions of various local artists, a common urban installation, more often applied when attempting to block both access and views to a construction site.

But what are they trying to conceal here? Pivoting a few feet from that previous perspective proves everything. It’s a parking lot, and the only opening is that stairway down. 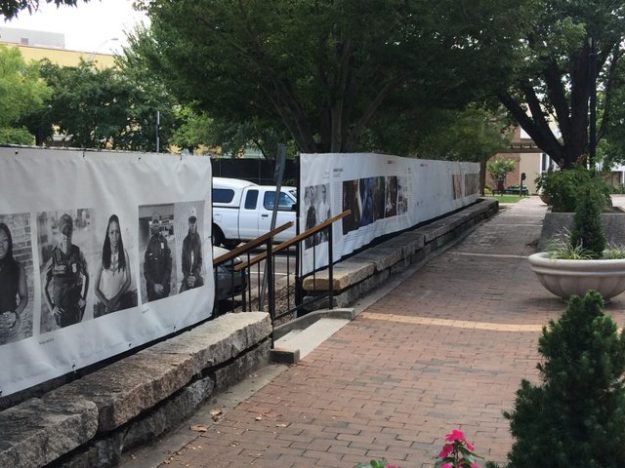 And an ordinary parking lot it is. 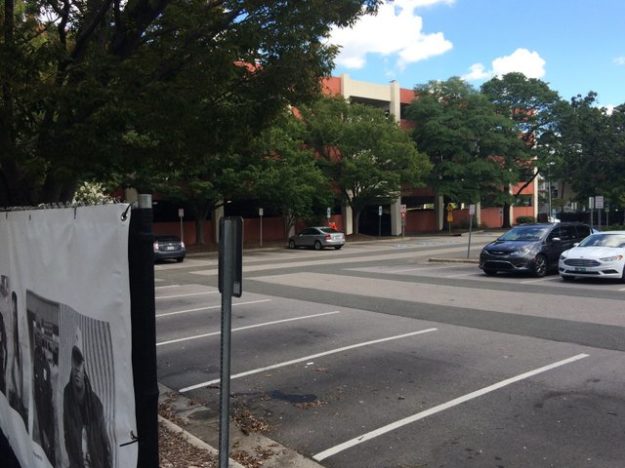 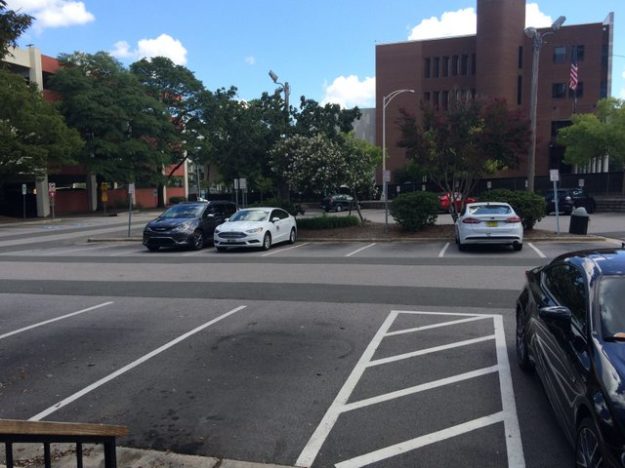 But notice that the fence with the sheath of interpretive banners stretches across the entire perimeter. 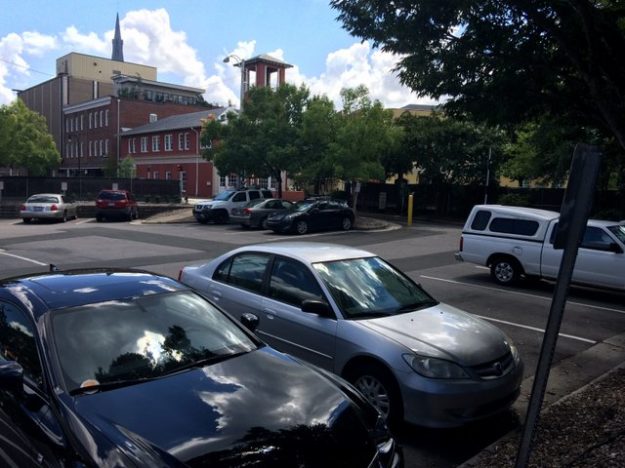 And this interpretive signage continues on the other side of Orange Street, adding visual interest to the plain wall of an underutilized building. 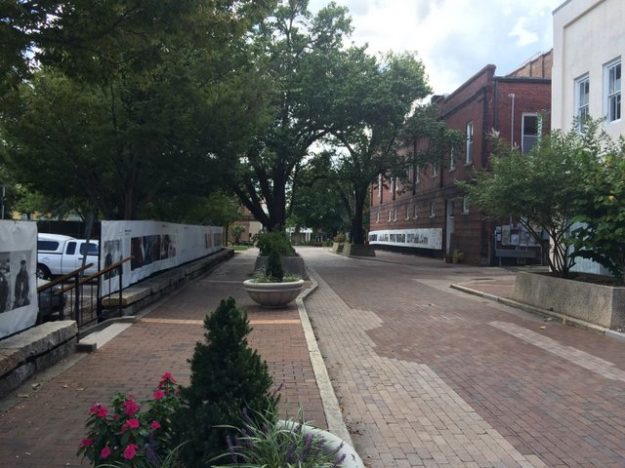 In a sense, these interpretive banners are an aggregated makeshift mural; like most murals, they divert attention from vacancy of form that shouldn’t be there—the same as murals that embellish a blank side wall, left exposed when the adjacent building got demolished. They show a concerted effort to patch the scars of Durham’s economic malaise—scars like an off-street parking lot. It’s not a big lot, and I have no doubt it will get developed in the years ahead, but the forces that created this installation, these hundreds of feet of interpretive banners, seem aware that a parking lot in such a setting is a liability, even an eyesore. (And as parking lots go, it’s not bad: still filled with tree islands and landscaping.) These subtle gestures might not amount to much—after all, they clearly are temporary—but the reflect an attitude where, in an urban setting, big parking lots are more of a liability than an asset. Compare that to a decade ago, and auto-oriented cities faced pushback among the communities any time new downtown development impeded access to parking. And the accoutrements of the Durham Streetscape—at least here in the one-block Orange Street—reveal sensibilities more oriented to the pedestrian than the motorist. At last.

Never mind if the parking lot is hard to see because of the interpretive banners; drivers will find a place to park sooner or later. It’s the American way.

PrevDirt turns 10!
Multifamily monotony: how to put a new design spin on an all-too-familiar housing type.Next

One thought on “Interpretive banners as makeshift urbanism: the Durham solution.”