It is this month, way back in 2009, that I inaugurated this blog, with a post on wildlife tunnels in a suburb of Boston. I wanted breadth. At that point in time, I thought it would just be an amusement—a hobby that would help me hone in on my photography skills, while giving me a chance to talk about (and eventually dialogue with others) on weird things that interest me. I set some fairly basic parameters to American Dirt: all blog articles would have at least one photograph, and the subject would be “landscapes”—not cities, or suburbs, or architecture, or urban planning. I wasn’t sure how far it would take me; I had no other real long-term visions, other than an intentions never to use Twitter to promote (a tool that was still fairly new at the time), and I was not going to monetize my blog through ad space.

Over the years, I’ve adhered to all of those principles, and I’ve been chary to take on new ones: I only started promoting with a Facebook page in 2015, and I haven’t yet taken on Instagram (and, at this point, I probably won’t). I do have an e-mail subscription service (dirtamericana@gmail.com) for those who want updates but don’t have a Facebook account, though I haven’t been very good at keeping up the monthly posts. What can I say; I was never good at self-promotion. This reticence has probably curtailed American Dirt’s visibility: the blog is by no means popular. But, by this point, I can usually expect at least one or two comments, and sometimes more. Sometimes many more. It is very hard to build a great viewership for blogs in this day and age; you usually have to post far more frequently than I do (with a full time job, five posts a month is usually all I can muster), and vlogs have clearly eclipsed in popularity. Then came the podcasts.

Nonetheless, my articles have borne fruit: they have yielded me opportunities to write for such diverse sources as Huffington Post, New Geography, Urban Indy, Streetsblog, Planetizen, City Journal, and (perhaps the most anomalous) The Episcopal Café. I’ve been interviewed on local news segments in metro New York and Baltimore. And, even when the response seems meager, or when time constraints have made it difficult (such as my work commitments in Afghanistan from 2010 to 2012), I’ve kept the blog alive.

And it is thanks to the support from my readers and their thought-provoking commentary that has allowed American Dirt to flourish in its own modest, quiet way. I can’t thank you enough, not only for your thought-provoking responses to my blog articles, but for helping to sustain American Dirt through new ideas, which in turn become new posts. I hope I have been fair as a respondent as well: not only do I try to reply to comments whenever I have something to say, but in an era where censorship has become fashionable, I moderate as little as possible. The only rules that prompt me to trash comments are 1) if they’re deliberate ad spam, or 2) if one commenter verbally abuses another one of my commenters. You can say what you want about me; at times I definitely merit the criticism.

Whether I keep this going for another decade remains to be seen, but I may eventually use it to propel the dialogue in a different, higher profile direction. I’m starting a contract to upgrade the blog—not a lot of aesthetic changes, but mostly to improve its functionality. I may eventually link it to other social media, or at least a promotional platform, being as unfond of Facebook as most of us are. And I expect to continue to take on commissions from time to time. Nothing too radical.

In the meantime, as I keep other irons in the fire, I leave this interesting, potentially coincidental infantry of Genie hydraulic lifts in San Francisco, just down the street from Yerba Buena Gardens, near the Children’s Creativity Center. 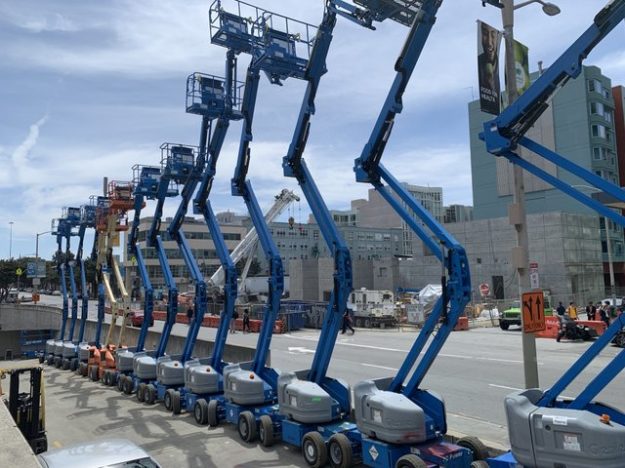 I’ve never seen so many of these hydraulic lifts in one place. Are they lined up in preparation for a development? How big could the construction project be, that it would need so many? Stepping around from a different angle, I’m a bit more convinced that some entity has configured these hydraulic with a different overall ambition. 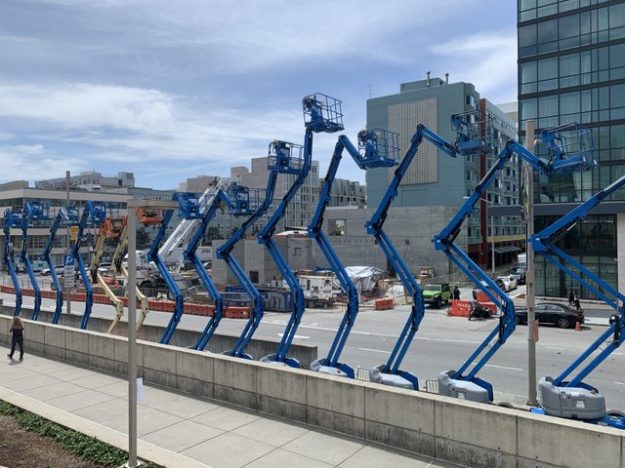 Taking a closer look, I only realize now, viewing the photos (something that didn’t occur to me when I was there, viewing this arrangement) that the positioning of the hydraulic lifts reflects the stance of a person, landing from a jump, and getting ready to leap again. It’s kind of corny and beautiful. 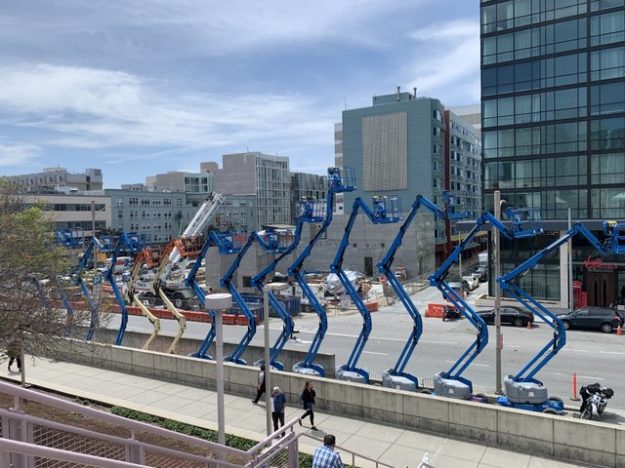 I’d be very surprised if this was a long-term installation; I can’t find any information on it. Perhaps it was just a construction team having a few laughs, and maybe it genuinely was unintentional: they just lined the hydraulic lifts in a fashion where they fit comfortably. Regardless of who or what prompted the effort, the fact that the visual impact is subtle—it’s not going to wow everyone—makes it all the more perplexing for those of us who do end up noticing it. And I guess I see this row of hydraulic lifts–of attempts to leap–as an underlying metaphor for my approach to American Dirt…which is equally corny and beautiful. Thanks again for reading.

PrevWhat will Washington DC do with all its triangular parcels?
Interpretive banners as makeshift urbanism: the Durham solution.Next