By this point, it is all but common knowledge that metro Washington, DC will greet the second headquarters for Amazon.com, the world’s largest soup-to-nuts Internet-based company. Less familiar, though, is its exact location, in an area called Crystal City, a mixed-use enclave directly across the Potomac River from the nation’s capital, in Arlington County, Virginia. Though Crystal City is a well-known neighborhood (if “neighborhood” is the most appropriate word) among residents of the DMV, it’s not a household name in the way Harlem might be to New York, or Chinatown (or even Haight-Ashbury) functions within San Francisco.

Amazon’s massive investment in Crystal City may help raise its profile, though it’s unlikely to elevate it into a tourist attraction anytime soon, let alone a secure spot in the annals of American place-making mythology. Why? Because, in a city with numerous unique landmarks and prodigious architectural diversity, Crystal City doesn’t check many boxes for visual interest. Sure, it’s home to over 60,000 people, boasts strong access to WMATA /Metro (DC’s subway), features countless restaurants, hotels, and regional branches to globally recognized corporations, Amazon notwithstanding. It’s generally walkable, balanced with well-maintained and programmed green space, it’s about as central as one can get within the metro, and it’s just a stone’s throw north of Reagan International Airport (DCA), the primary factor for Crystal City’s prominence as a node of activity. But it still looks and feels like the second banana to a more important main dish, which is precisely the case: it’s a hub of private industry that complements the critical public-sector activity immediately across the river, in DC’s downtown and the Federal Triangle. 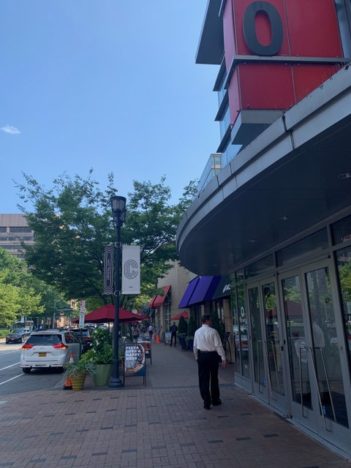 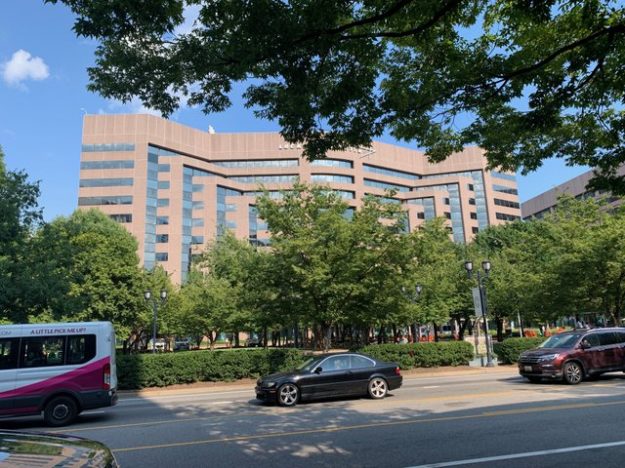 A previous blog article of mine shows some additional vistas at the putative boundary between Crystal City and the adjacent (and distinct only in name) neighborhood of Pentagon City, home of the Fashion Centre at Pentagon City (Pentagon City Mall). Both districts share an abundance of mid- or high-rise buildings dating from the 1970s to the present, looming over wide streets with white-collar oriented retail/restaurants, much of it national brands. Given the time period of the development, it’s distinctively vibrant, but otherwise it lacks distinction. It’s every bit as much of an Edge City as Tysons Corner fifteen miles to the west, but unlike that more nationally famous epicenter of all things suburban, Crystal City is pedestrian oriented at its core. It’s a walkable post-war shopping district, conceived during a time when car was king. How weird is that? 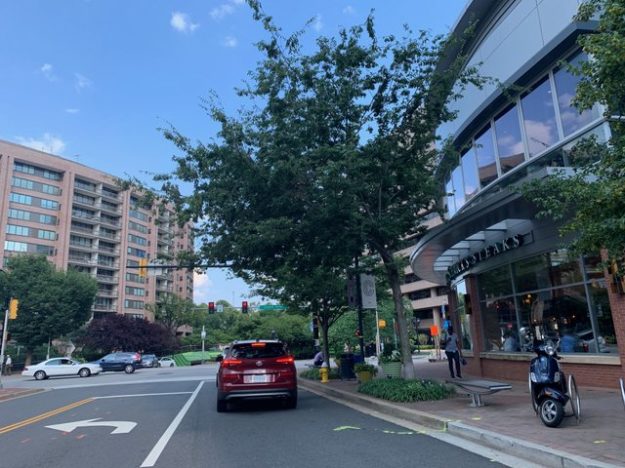 Few other metros in the US claim districts with the look and feel of Crystal City, but it’s hardly a top-choice attraction for visitors in the region. Though it does have a fair share of hotels, its primary advantages in that regard are the previously mentioned amenities: a high concentration of corporate or regional headquarters, the proximity to DCA, and the quick access via Metro to all of DC’s biggest attractions across the river. It’s not a destination in and of itself, and it is unlikely to become one when Amazon HQ2 arrives. And, no matter how much Amazon glitzes up the district (it will certainly add a density of well-paying jobs), Crystal City will always look like what it is: a smartly but perfunctorily conceived superblock configuration that sprung up in the 1960s in a previously underutilized light industrial area—a response to increasing land values as the airport’s prominence warranted complimentary hotels, offices, and shopping nearby. In 2019, it remains a desirable piece of real estate; Amazon almost certainly wouldn’t have chosen it otherwise.

Incidentally, the one part of Crystal City that is most visually distinct offers the most conventional architecture. 23rd Street South, which intersects with U.S. 1 (Richmond Highway) at a prominent gateway into Crystal City, features low-slung, pedestrian-scaled buildings typical of a small town’s main street, over the length of a large block. Facing eastward toward the core of Crystal City, a stretch of 23rd Street looks like this. I suspect it incorporates a stop to an old streetcar line that served as the shopping hub for the early twentieth century, single-family residential neighborhood that abuts it to the west. This assembly of no more than 20 storefronts along 23rd Street seems unusually eclectic: a few ethnic restaurants, a pawn shop, a gay bar, smoke/vape shops, at least two hookah bars, a bank, and a gas station. It’s less upscale than the fancy national chains that line much of the street level in 1970s-era Crystal City, but the local flavor makes it more interesting in many respects. And, most relevant within the milieu I have created for this article, 23rd Street features this bizarre little establishment. 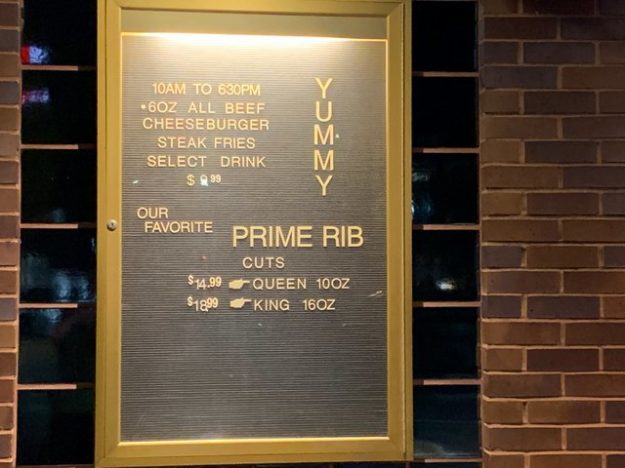 The menu offers yummy prime rib as a special, on one of those old customizable signs that deploy plastic letters that one can snap into place on a corrugated surface. Long perceived as ugly and antiquated, these signs experienced a resurgence in recent years, particularly noticeable in hip coffee bars. Or this mysterious establishment with yummy prime rib. 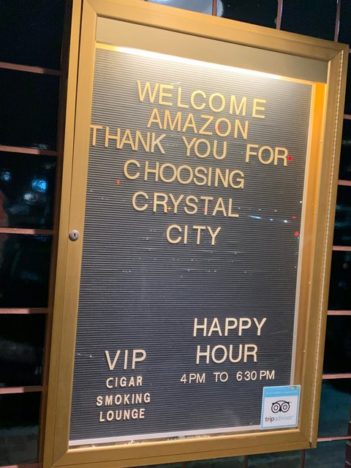 Do these signs have a name? I’m sure they do.

Whatever this place is, it seems pretty delighted that Amazon has chosen to bring its labor force (and all that money) to Crystal City. Stepping back onto the street, we can see what sort of establishment is prone to announcing its gratitude through signage. 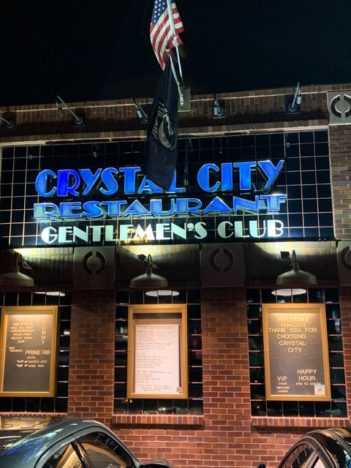 That’s right—it’s a gentlemen’s club, which, judging from the style of the façade, has been on 23rd Street South for a very long time. Is Amazon’s HQ2 likely to result in a surge in business for a white-collar strip club? Scores of tech workers aren’t exactly the demographic I would have expected for such a place, but the nation’s capital is no stranger to sleaze, and the comparative scarcity of large-scale industrial districts means that Washington DC lacks the sort of “smut corridor” one might find along, say, Passyunk Avenue in Philadelphia (also near its International Airport). But perhaps the spinoff businesses that pundits expect the Amazon HQ2 to yield will indeed include adult-themed activities. For the Crystal City Gentleman’s Club—and the various vape and hookah shops nearby—hope springs eternal.