Despite the expansive array of urban imagery I have featured here at American Dirt, I have rarely covered graffiti as a topic. Perhaps it’s because I fundamentally respect private property and see it as an infringement. But not entirely: I have no problem recognizing graffiti tags if they are funny or creative enough. In many cases (like the “funny” example I just hyperlinked) it’s probably so ephemeral that it would be lost forever if I didn’t snap that photo. And even though it frustrates me that vandalism has taken place in nearly all circumstances, the message it conveys toward social policing and often neglected spaces gives cause for numerous ruminations.

So I couldn’t pass up an opportunity to feature this odd little illustration in Northeast Washington DC.—the lower one, in white. 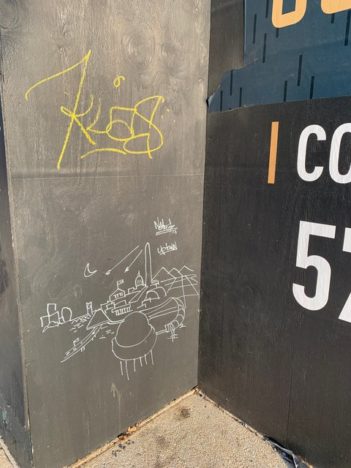 It may take awhile for it to sink in for an out-of-towner, but a local can tell exactly what’s going on. Just use the tallest, most prominent structure as a reference point—the one from which the arrows are emanating. It’s the Washington Monument, and the rest includes prominent landmarks on the east side of the city. The artist even attempted an axonometric projection common in architectural and engineering drawings, and, while far from perfect, it at least evokes those illustration-based tourist maps that represent key landmarks disproportionately large, since they serve as the reference points. No, the Washington Monument wouldn’t be nearly that tall in real life.

This axonometric graffito is remarkable for its detail: it includes the U.S. Capitol, the Library of Congress, what has to be the Supreme Court (probably not Folger Shakespeare Library), and what I presume is Union Station. Less familiar to outsiders, in the foreground, is the aging, spherical RFK Stadium. It even shows the taller buildings of Rosslyn in Arlington County, on the Virginia side of the Potomac River, far to the left. And that bridge at the lower left demarcates the point where the Anacostia River flows into the mightier Potomac. About the only thing that defies any credibility are the mountains (pyramids?) in the background on the upper-right. Sure, DC has some hills, but you’d have to go awfully far west to see mountains at that scale. Unless one considers the ridgeline east of the Anacostia, the region doesn’t have prominent hills…and the Anacostia ridgeline would be in the foreground from this perspective.

Perhaps most interestingly of all is the fact that the angle roughly parallels the location where I encountered this graffito: on the busy, revitalizing commercial corridor of H Street, which would almost serve as an axis beginning to the right of RFK stadium, then stretching to the right of the Washington Monument toward those elusive mountains. All in all, even if the artist used an actual map (or aerial photo) and just traced these monuments, it’s a remarkable feat for illicit art that could have resulted in an arrest if the police caught him/her in this time frame, which is considerably longer than it takes to tag a building with the junk in yellow on the top. And it will inevitably disappear in a few months, not because the owner will wipe it clean but because the “canvas” is a wooden partition blocking a construction site.

So I’m guilty as charged: I’m cheering on some unlawful behavior. Maybe if this axonometric had been on a permanent structure (resulting in greater damage) my conscience would have gotten the best of me, and I wouldn’t be blogging about it. Nah. I like maps too much.