What will Washington DC do with all its triangular parcels?

In a quiet, mostly residential neighborhood in northern Washington DC, less than a half-mile from the Maryland border, a modest bit of new construction yields a subtle surprise. 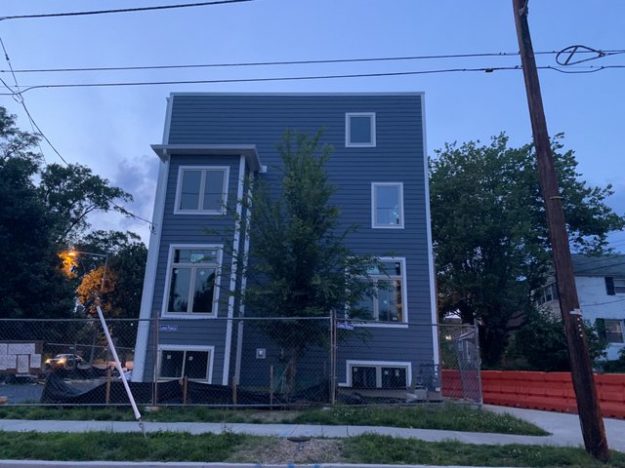 It doesn’t look like much, and, in most respects, it isn’t. Just a big new house, presumably multifamily (I’m guessing between two and four units), though maybe it’s all reserved for a single household. The house is less remarkable than the parcel itself. A pivot to the right reveals more. 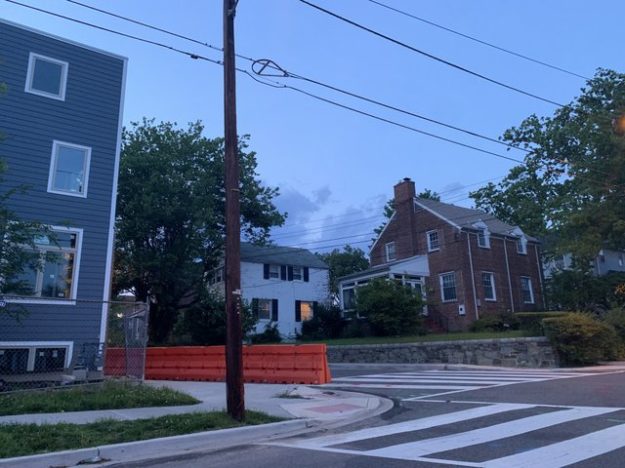 For those who hail from less urban areas, it’ll probably seem like there’s not much in the way of a yard, and indeed, the setbacks between the street and the edge of the structure on all three sides are small.

Wait—what’s that? Three sides to the parcel? Stepping back thirty feet reveals quite a bit more. 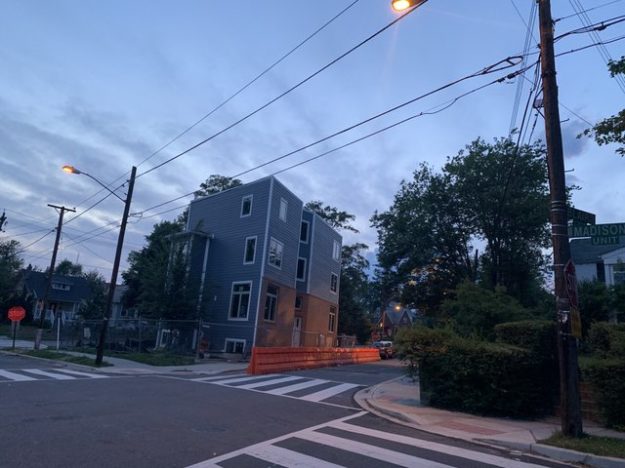 If it’s still not crystal clear, let’s take a look at a map of the immediate area. 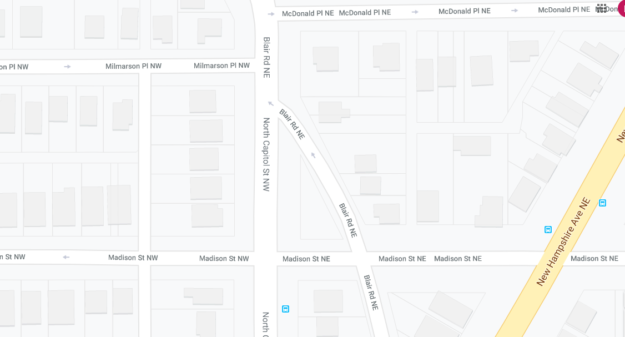 It really is a triangular parcel, sliced by three streets: North Capitol, Madison, and Blair Road NE. It’s not atypically large or small compared to its neighbors. But it is an oddity in the sense that it lacks a conspicuous backside (or corresponding yard). Most of the other homes in the area are at least seventy years old: the Fort Totten neighborhood, neither flourishing nor blighted, has not welcomed very many housing permits in quite some time. 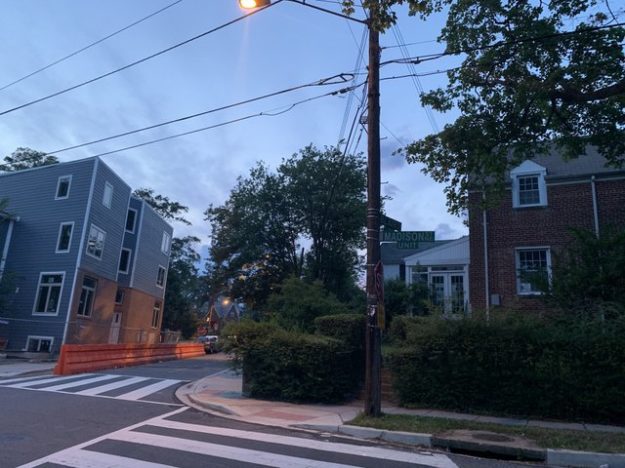 As is obvious from the fencing and stickers in all the windows, this house is new construction; a Google Street View from a few years ago shows what the parcel looked like prior to development: not much more than a grassy patch of land. And DC is chock full of these. Many people are vaguely aware of the planned nature of Washington DC but don’t know how carefully conceived it is; those visitors who venture outside the National Mall often find it confusing, with its array of civic squares, circles and six-way intersections. But the Pierre L’Enfant Plan “of the city intended for the permanent seat of the government of the United States” had always intended to operate as a strict grid with a variety of diagonals that would radiate outward at carefully conceived angles from some of the most prominent landmarks. The diagonals, often some of the widest streets, would thus offer bold vistas due to their terminus at structures like the US Capitol, the White House, Union Station, and so forth.

As L’Enfant conceived the Federal City under George Washington’s supervision, the focal point would be the US Capitol, and the x and y axes divide the city into four quadrants, thereby justifying the NW/SW/NE/SE suffixes used in every single street address in Washington DC. Each successive meridian would use a number counting outward from the capital (1st Street, 2nd Street, 3rd Street, etc.) while the latitudinal streets used letters (A Street, B Street*, C Street. Meanwhile, the diagonal streets assumed the name of states. L’Enfant’s plan did not extend to the entirety of the District of Columbia’s 68 square miles; it only extended northward to what is today Florida Avenue (formerly Boundary Street). Therefore, developers did not plat the Fort Totten neighborhood until much later, but it follows the conceit intended in L’Enfant’s plan, except, of course, that the naming convention for letters exhausted itself prematurely—that is, the city’s east-west streets extend much further to the north of the US Capitol than is available from the 26 letters. Continuing northward, the letter-based streets end at W Street; there is no X, Y, or Z streets, just as there is no J Street, and Congress renamed the two B Streets (north and south of the east-west axis) to Constitution Avenue and Independence Avenue back in 1930. After running out of letters, the naming convention returns to the letter A but uses two-syllable surnames: Adams, Bryant, Channing, Douglas, Evarts, and so on. Continuing northward, after reaching W, the roads again start back at A, but with three-syllable surnames: Allison, Buchanan, Crittenden, Decatur, et cetera. Fort Totten, a neighborhood near the northern boundary (named after a Civil War-era installation whose ruins serve as a large park), uses those three syllable surnames, while Hawaii Avenue (the last state admitted to the union) frames the southern end as a diagonal. Blair Road, another diagonal, serves as the northern boundary that creates the hypotenuse to the triangular parcel featured in these photos.

Between various congressional committees, the National Capital Planning Commission, and the Commission of Fine Arts, the Pierre L’Enfant Federal Plan has largely remained intact, even amidst various modernizations, freeways, and the construction of an extensive rail network, not to mention the WMATA (Metro) in the early 1970s. This latticework of grid and diagonals results in fragments of triangular parcels throughout the District, and while many remain part of the city’s park system, some function as little more than dead, underutilized space.

Clearly not this one in Fort Totten. It is a testament to the desirability of real estate in Washington DC that a nondescript parcel in a little-known neighborhood can achieve development, since its configuration is less marketable than the conventional rectangular parcel with a discrete front and back. Plenty of other cities have inadvertently conceived awkward strips of land that struggle to find a purpose; few of them ever achieve anything because the value of the land simply isn’t high enough to prompt creative use. But in the flourishing economy of metro Washington DC (at least 30 construction cranes are operating in the city at any given point in time), even the most neglected triangular parcels can encourage creative development. Note from the map above that another partially visible triangle, only slightly larger than the one featured here and bounded by Madison Street, Blair Road, and New Hampshire Avenue NE, accommodates three single-family homes.

Land title and zoning also probably play a role: while many of the triangular parcels remain under public ownership (potentially National Park Service, but probably DC Parks and Recreation), this parcel either sat in private limbo for decades without a clear-cut purpose, or perhaps the City put the parcel up to bid after realizing it would never serve as a desirable pocket park. Or perhaps a private entity actively pushed the City to sell it and then found a way to use residential zoning classification to turn it into a viable housing unit. Then again, perhaps I’m wrong on all counts: after all, a Google Street View from late last year suggests little progress has taken place in the last nine months (these photos are only a few weeks old). Like so many of the triangular parcels throughout Washington DC, this one might remain in flux…except with a nearly finished house standing on top of it.

PrevBrandBox at Tysons Corner Center: a shrewd pop-up solution, a Band-Aid, or a tourniquet?
Dirt turns 10!Next

2 thoughts on “What will Washington DC do with all its triangular parcels?”