While this article treads across some familiar territory—dead and dying malls—it arrives through a different lens: the eyes of a friend and fellow devotee of interesting landscapes. I blogged many years ago about Sandusky—specifically an unusual Value City Furniture in the heart of downtown—but I spent very little time in the area that one would like call “the suburbs” (in quotes because Sandusky isn’t really big enough to have suburbs of its own). Back when I wrote in 2012, Sandusky couldn’t brag about a very lively downtown scene, but it wasn’t desolate or blighted, despite the broader Lake Erie conurbation in Ohio stretching from Toledo to Cleveland (with Sandusky smack in the middle) suffering from decades of deindustrialization and population loss.

Incidentally, a quick online visit to Sandusky—courtesy of Google Maps and Street View—indicates two critical findings: the Value City Furniture is still there in its same downtown location, and, not surprisingly, a number of new bars and restaurants have opened in the small city’s downtown, suggesting that it has enjoyed the same sort of reawakening common to downtowns of varying sizes all across the country. Good for Sandusky. Concomitant with downtown Sandusky’s revival, the Sandusky Mall—just 2 miles to the southeast—has plunged in popularity. 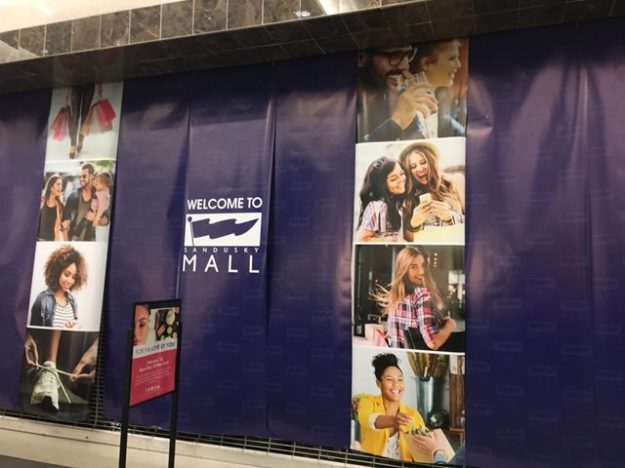 What’s particularly devastating about the Sandusky Mall decline is that it has not appeared to be gradual: less than three years ago, this 43-year-old mall had all four of its anchor tenants fully occupied. But in the spring of 2016, the long struggling department store Sears announced it was closing its location in Sandusky. Just six months later, the Macy’s announced its closure, which was undoubtedly more of a blow to the Cafaro Company, the developer that initially constructed the mall and has managed its throughout its life (an apparent rarity in the mall management biz). While Macy’s is hardly surging, it certainly hasn’t faced the same persistently abysmal track record as Sears Holdings Company. But then, in the spring of 2018, the Bon-Ton Stores, Inc. announced its bankruptcy and the liquidation of all 256 of its locations in the chain, which included other regional names beyond the Pennsylvania-centric Bon-Ton: Boston Store (centered around Kansas City), Carson’s (around Chicago), Younkers (from Des Moines), Herberger’s (Minnesota), and Elder-Beerman, the latter of which was widespread in Ohio—including a space at Sandusky Mall. It closed within weeks.

The Sandusky Mall of 2019 is still reeling from a one-two-three punch; only JCPenney survives among the anchor tenants. In its defense, the complex still boasts a reasonable number of national brands among its in-line tenants: American Eagle Outfitters, Spencer’s Gifts, Finish Line, Champs Sports, Bath and Body Works, Victoria’s Secret, and Journey’s, among others. It also features two quasi-anchors; though T.J. Maxx and Books-A-Million don’t carry the weight of a full-fledged department store, to the best of my knowledge, they are not struggling nationally. But I strongly suspect that the majority of these retail stalwarts are simply remaining at Sandusky Mall through the duration of their leases; it is inevitable that mall traffic has plunged, and the departure of these anchors (especially the Macy’s loss) suggests that Sandusky Mall’s sales-per-square-foot were subpar to begin with. Another clear indicator that this tenant exodus should have come as no surprise: most of the remaining tenants are locals. 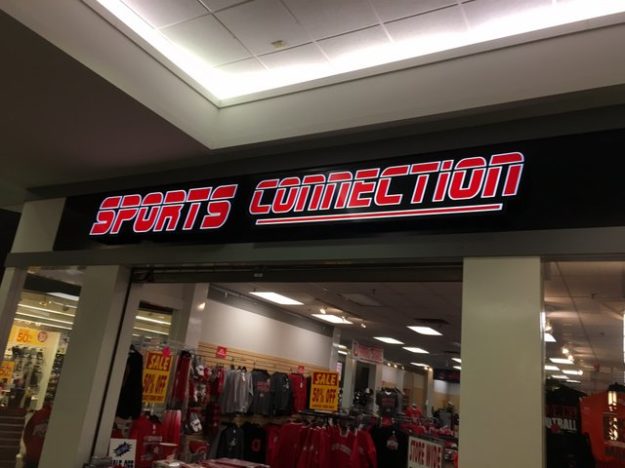 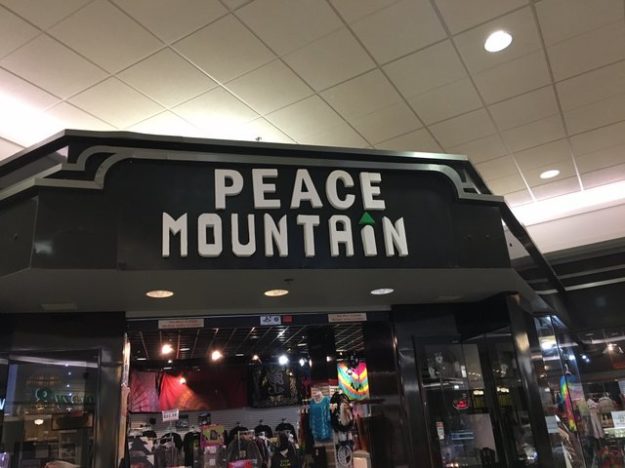 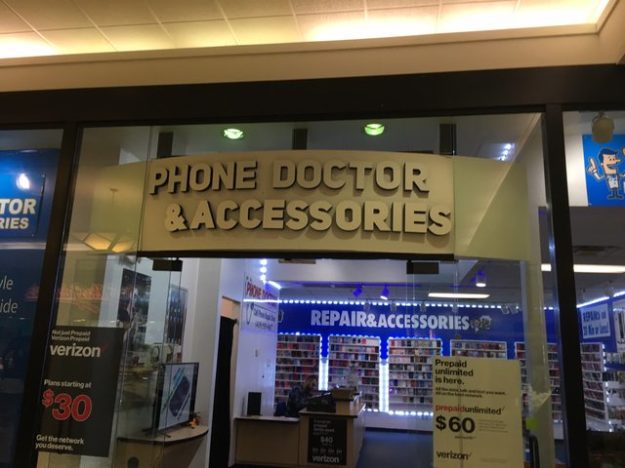 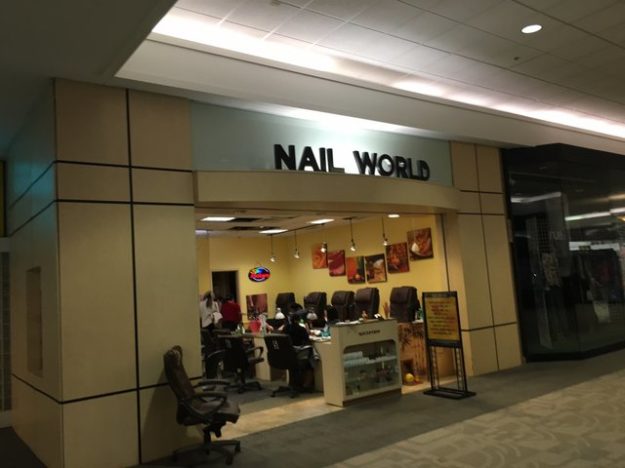 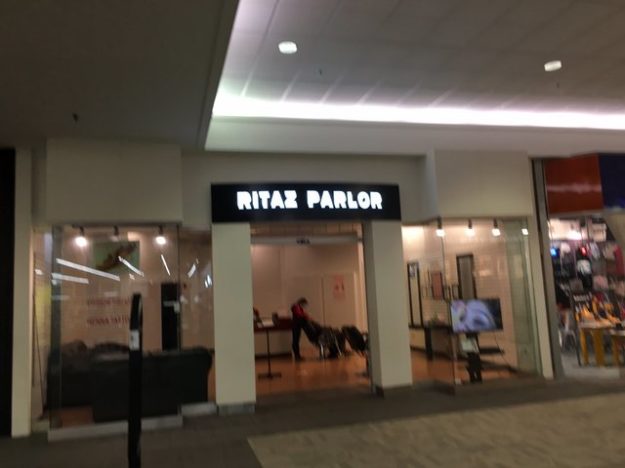 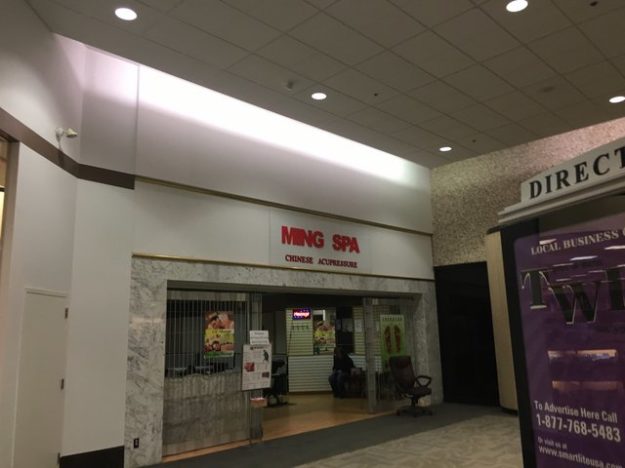 And then there are tenants like Amazing Space, which appears to be an arcade combined with play area, to be rented for children’s parties. 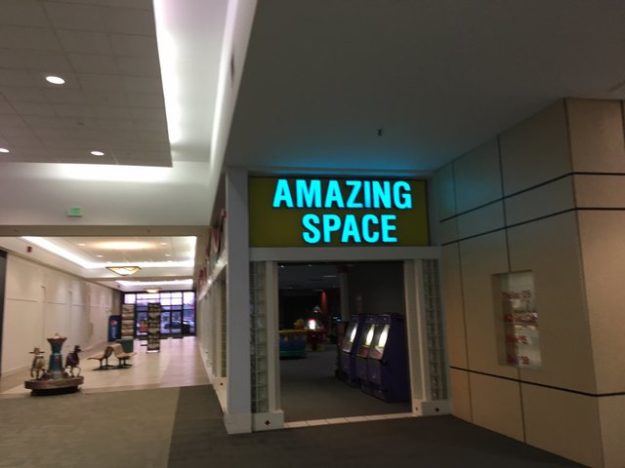 Multi-purpose spaces like these tend to involve a high-risk concept, and they rarely seek out the top-dollar real estate. They’re usually homegrown and cannot afford the prestigious stuff. The mall’s restaurants include only two national brands—Auntie Anne’s and Mrs. Fields—along with a handful of local casual establishments like these: 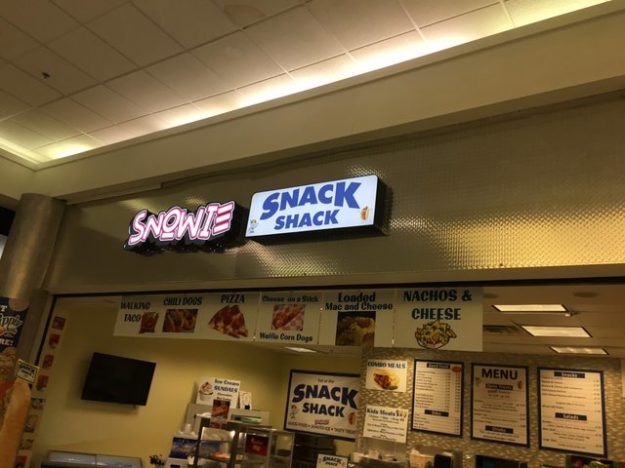 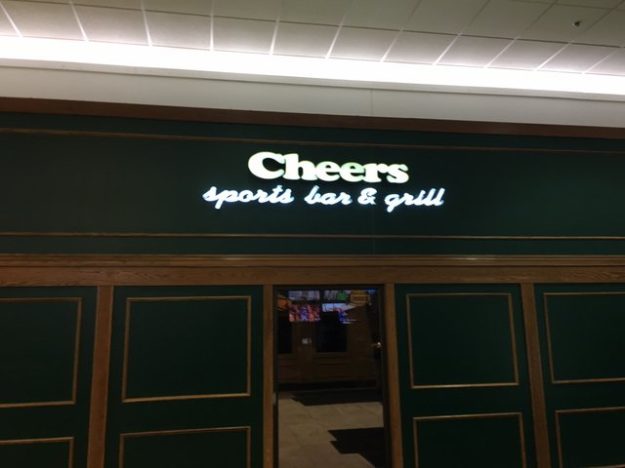 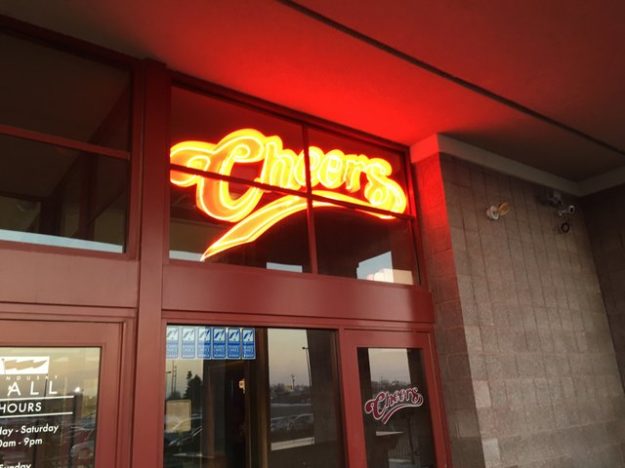 The latter vaguely mimics the classic sitcom’s logo, but clearly only a locally run concept.

Not surprisingly, the JCPenney wing has the highest occupancy level, including most of the nationally known in-line tenants nearby, clinging to their parent like a bunch of baby opossums. 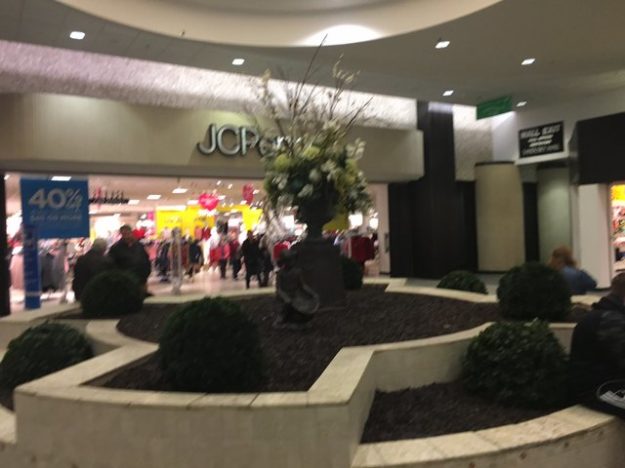 The opposite end of the mall—presumably the side that hosted the chronically anemic Sears—already approaches “dead mall” classification. 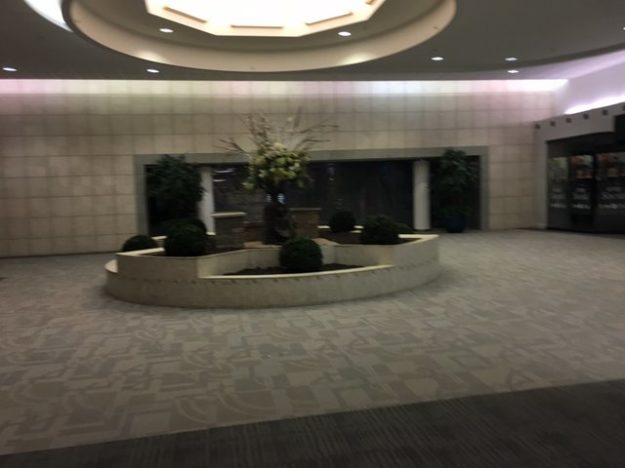 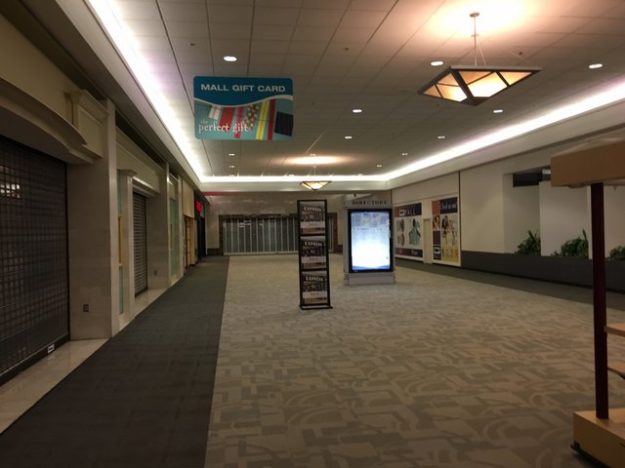 Incidentally, to show how much the mall management is struggling to catch up with the outflow, the mall map on display at the premises still shows Elder-Beerman, though it departed over a year ago. 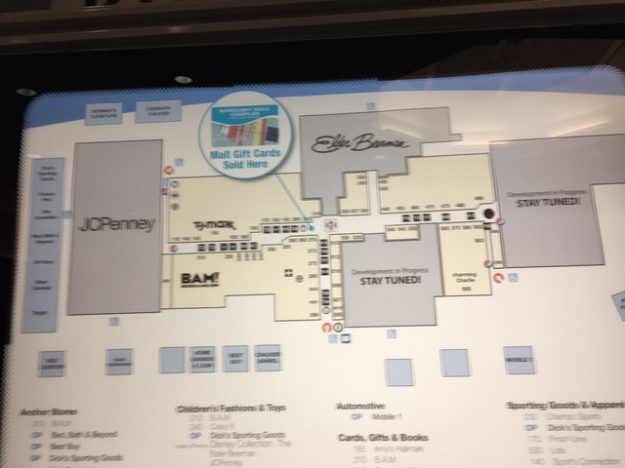 The mall’s website is at least more up-to-date. But the website also shows a number of tenants that are not physically attached to the mall facility, which includes outparcels like Cracker Barrel, Target, Planet Fitness, and Best Buy. While I suspect the Cafaro Company owns the entire grounds that host these outparcels, an adjacent strip mall, and the parking lot, it’s a bit misleading to list these as part of Sandusky Mall, since they are all physically unattached and not featured on the display map from the photo above. Additionally, the mall’s website references a Disney Store, even though it’s really just part of the “Disney Collection” inside the JCPenney store. 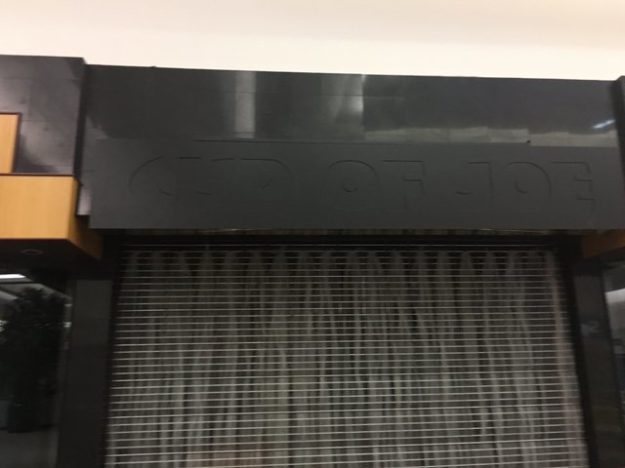 These photos provide ample evidence of Sandusky Mall’s struggles, and it’s impossible to conceive of a situation where management could stem the tide. Though Sandusky has confronted many of the deindustrialization challenges common to Rust Belt cities large and small, it boasts two critical advantages: a picturesque location right along Lake Erie, and, perched on a spit of land projecting into this great lake, is Cedar Point, the second oldest continuously operating amusement park in the country (since 1870) and a colossal magnet for tourists during the summer months. In 2019, this resoundingly successful attraction is more likely to stimulate interest in Sandusky’s downtown than an off-center, middling mall, much the same way a flourishing vacation town like Rehoboth Beach, Delaware can offer great retail on its main street, a variety of auto-oriented strip malls, as well as an enclosed mall forced to close down a few years ago due to lack of tenants. If these towns cannot support the mall typology, it’s hard to imagine how they’ll flourish in small cities without these intrinsic advantages. Yet Sandusky Mall undoubtedly seemed like it was prevailing against the encroaching retail apocalypse as recently as 2015.

I hate to be a cynic, but it’s hard to imagine a future where successful malls are the status quo; within five years, the right-sizing of the American mall may translate to only one real success story for every 500,000 people, meaning nearby Toledo will have about one mall and Cleveland only three. And that still may prove an optimistic forecast. All the better reason to support the businesses in a reasonably well-preserved downtown like Sandusky’s. A creative investor will repurpose those hulking, windowless retail behemoths someday.

PrevThe Sanctuary (First Lutheran): soon to be an article in the Digital Encyclopedia of Indianapolis.
Pop-up options at DC’s Wharf: the buoy in turbulent retail waters.Next