R. House: a Baltimore food hall enters the scene on firm footing—but are the shoes a bit too comfy?

Even as virtually every sub-category within retail is straining under the escalating popularity of online shopping, one typology has proven unexpectedly hot, and it shows no real signs of relenting: the food hall. Perhaps because I’m a hayseed, I didn’t really have a mental image for the term until about a year ago, when I learned that a massive new mixed-use development in my hometown of Indianapolis would feature a food hall as one of the central attractions. Even then, I wasn’t entirely clear what this meant. Then I realized I had visited a nascent food hall without even knowing it: the Easton Public Market opened during my final months of living in the Lehigh Valley of Pennsylvania.

But the inclusion of the word “market” in the name elicited some confusion: what made this large facility, with a multitude of food vendors surrounding carefully arranged seating, all that different from the traditional public market buildings of yesteryear? It seemed a little newfangled and chic-looking compared to most historic markets, and it lacked the vaulted ceiling one typically expects. Reflecting upon Indianapolis, I became nervous about Bottleworks—the massive project in Indianapolis that will, when complete, introduce the city to its first de facto food hall. This new food hall in Indy will open only about a half-mile from the 19th century City Market, an institution I have written about numerous times, starting when it was at its nadir back in 2009 to the obvious signs of revival six years later. Can the city really support both a new food hall and the still fragile City Market within a fifteen-minute walk from one another (maximum) let alone the fact that the Circle Center Mall still features a (no doubt floundering) food court just two blocks to the east of City Market?

Clearly only time will answer this question for Indy. But it hints at the thematic and semantic similarities between the three institutions: the old public market pavilion, the food court usually affiliated with a shopping mall, and the reinvented food hall, which usually offers a fast-casual vibe among its restaurant tenants but with an emphasis on local establishments (a contrast to the mall food court’s chains), and some of the vendors in a food hall sell meats, cheeses, produce or other unprepared goods. In other words, the food hall seems more in the spirit of those 19th century public markets (perhaps more cooked/prepared items than in the past), yet I suspect they offer greater competition when pitted against the long-dominant, increasingly stale and tired food court.

A trip to another new food hall allowed me to parse the semantics a bit further. 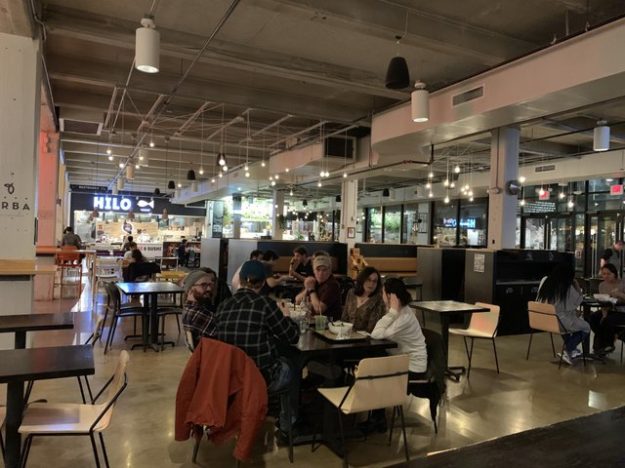 This is R. House in Baltimore, a centerpiece of the gentrifying Remington neighborhood, just ten minutes’ walk from the main campus of Johns Hopkins University. It offers about as good of an introduction to the food hall scene as any: a mid-sized interior that hosts about a dozen eateries (comparable to a large mall food court) but without the vaulted ceiling that we associate with malls. 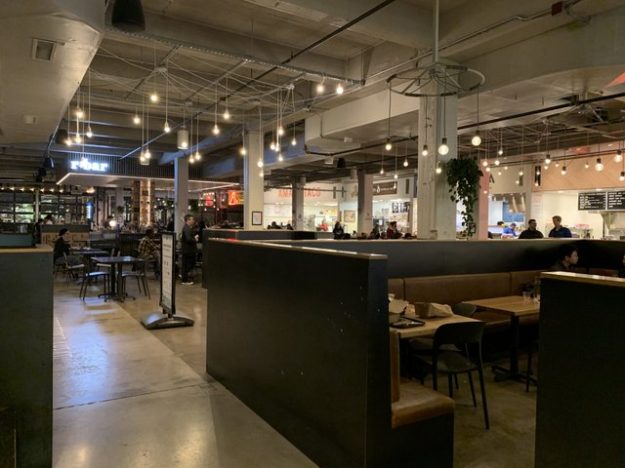 It’s also comparatively dimly lit: none of the fluorescence we expect from large institutions, giving it an intimacy further supported by the large number of booths. And the branding for the food vendors themselves is individualized: some feature backlighting, others are merely paint or decals on the walls. 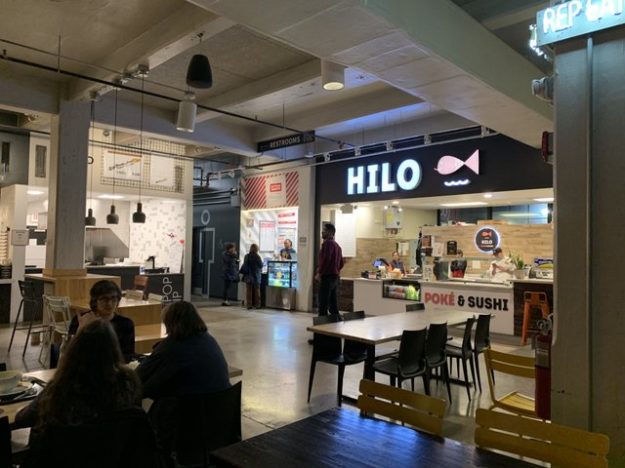 Here’s a restaurant that makes an extra effort to distinguish itself through its signage, employing a verdant tactic I wouldn’t expect to see at a mall (at least not one appealing to middle-class tastes). 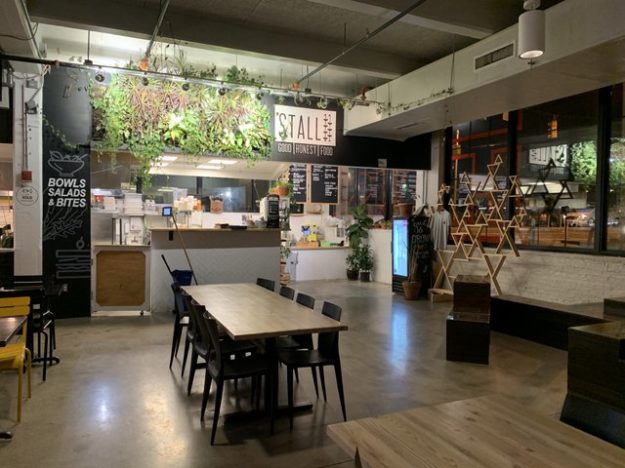 As for the offerings of the tenants themselves, I suspect the preferred adjective for the PR team at R. House would be something akin to “eclectic”. 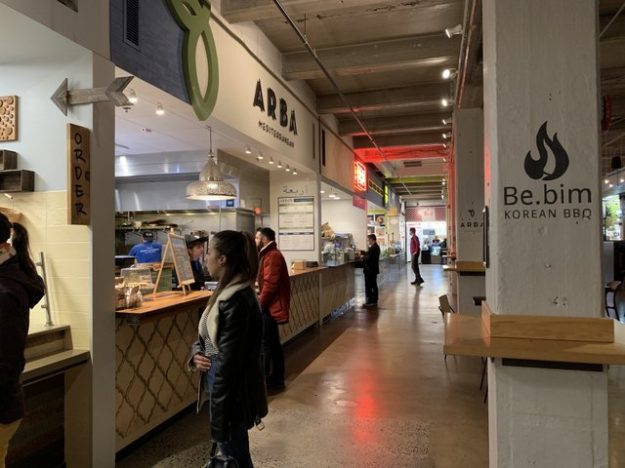 The vendors certainly cover a range of cuisines: Mediterranean, Korean, Mexican Polynesian, vegan, as well as more conventional offerings, like fried chicken, ice cream, pizza, and burgers—but all at a price point above that of the typical Wendy’s or Luca Pizza. The place also features a stage for occasional live performances. 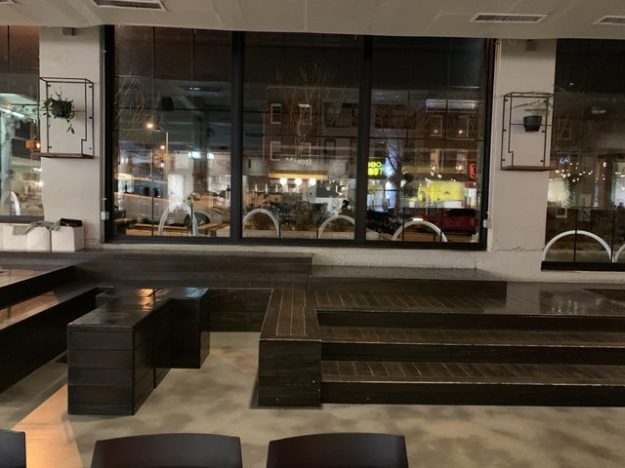 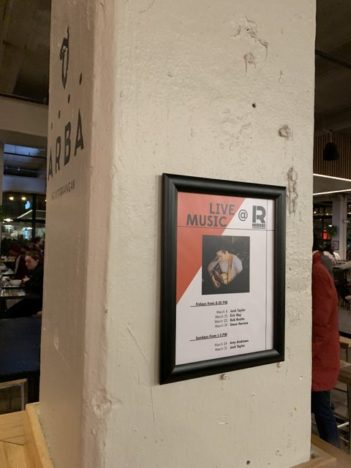 In one corner, it offers a loungier setting, encouraging patrons to linger with their laptops, and, I suspect, a cup of freshly ground coffee from one of the tenants. 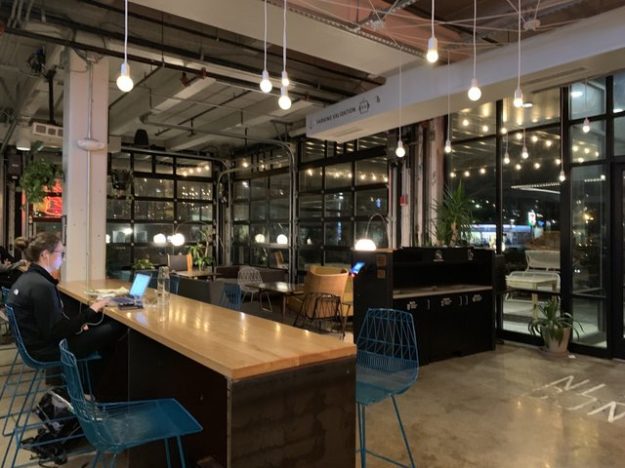 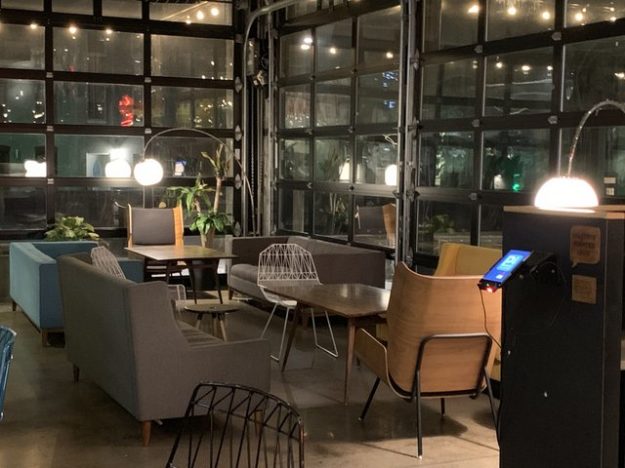 Serving as a geographic and thematic centerpiece, a bar helps keep R. House active and lubricates the conversation among friends, no doubt helping to propel the operating hours to 11pm on weekdays or midnight on weekends—far later than the typical mall food court. 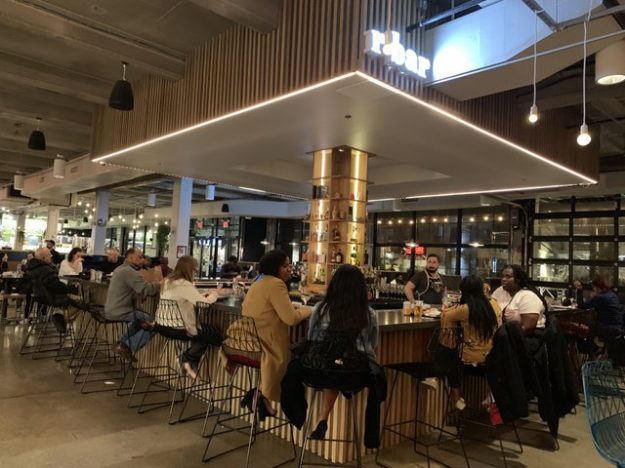 Lastly, R. House features one stall for a “pop-up” vendor—a fledgling new entrepreneur getting started in the craft, which will rotate among various tenants every week or two.

By almost every reasonable metric—the attendance on a Sunday night (when I took these photos), the online ratings of most of the restaurants, the ability to lure distinctive events like yoga, glassblowing, or drag movie nights—Baltimore’s R. House is a resounding success. And it’s impossible to deny the integrity of the premise, which, in the words of the website, “started with ten chefs who believed that uniting to launch their restaurants was better than going it alone.” The core mission of the place is to galvanize community, abetted no doubt by the fact that the Remington neighborhood has experienced an influx of well-heeled young professionals in recent years, many of them seeking an entrepreneurial hub within walking distance—‘cause that’s the sort of thing that yuppies like. In many respects, this food hall is serving the function of an anchor tenant to the broader culture of neighborhood restaurant/retail, even though it lacks the size or merchandise to generate the sort of sales volume of a true anchor. But, while a mall food court exists as a supplement to shopping, the food hall is itself the centerpiece, enhanced by the variety of other activities and imbibing that take place as matter of routine.

That said, I’m not yet confident that this is a long-term sustainable enterprise. Capitalizing on a concept much more established in the UK, the American food hall—which emphasizes local artisans over national chains, and often unaffiliated with a larger shopping venue (as in the UK)—is not yet a time-tested concept. Most are less than five years old. And Americans routinely discard tired trends for new ones. I certainly respect R. House’s emphasis on the local; as of May 2019, my research indicates that every one of these tenants operates exclusively under this roof. But this isn’t necessarily always the case: Washington DC’s Union Market features no national but many local, regional, or super-regional chains, as does the new food hall in Philadelphia’s gorgeous, renovated Bourse Building. (They have some of the same tenants.) R. House may prove a victim of its success: far from the city’s Inner Harbor, the location isn’t particularly touristy or high profile, but if Remington continues to gentrify, leasing rates will inevitably increase, which will make it harder for fledgling food vendors to work there, giving way to more established businesses with five, ten, or even twenty locations. I also see no purveyors of unprepared foods (meats, fruits, cheeses), which has long been a benchmark of the old public market. As the chains at places like The Bourse and Union Market become bigger and more pervasive, the the descriptor “eclectic” loses its credibility, and the similarity to a 1980s food court only grows.

If my pejorative use of “1980s food court” underlies my cynicism toward this concept, I only make this case because the 2010s food hall clearly thrives as an anti-establishment response to the perceived blandness, conformity, and impersonal character of mall food courts. But food courts are dying on their own terms, primarily because the malls that envelop them are collapsing. Yet, amidst this widespread decline in the value of mall real estate, a noticeable trend has emerged: the food courts themselves have become less chain-dependent (the national brands want higher foot traffic) and the eateries have become increasingly more local and ethnic-oriented. These days, a mall food court is just as likely to have Mediterranean, Korean, tacos, and the sundry offerings at R. House—so the eclecticism that food halls promote is more in keeping with their mythology than a genuine distinction.

Lastly, food halls are emerging at the same time that many cities are rediscovering their historic public markets. Those buildings benefit from the enduring appeal of historic architecture, endowing them with a perceived authenticity that most of these food halls can only emulate. They also routinely emphasize local—sometimes as part of their covenants or operating rules—and since they are more likely to be public, quasi-public, or 501(c)(3) operations, they don’t need to calibrate their leasing rates as powerfully to market demand. In other words, they often strive to offer reasonable prices that cater to small businesses in a manner that the for-profit food halls cannot replicate. 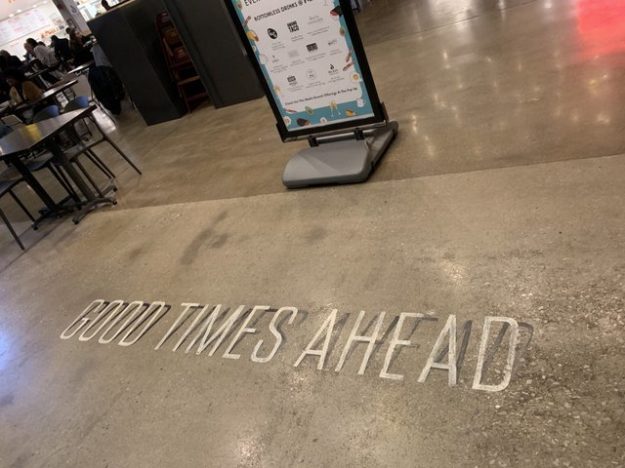 In the end, I postulate that the cultural forces that animate mall food courts, urban markets, and food halls represent three circles in a Venn diagram that, at this point, still reveal a significant amount of overlap. Food halls like R. House are of-the-moment and cool; many cities are kowtowing to developers in an attempt to capture their clout. But their geographic proximity to urban markets is often troubling: like in Indianapolis, Philly’s Bourse Food Hall is within walking distance of the flourishing Reading Terminal Market. And Baltimore has not one but three viable old urban market structures with which R. House must compete. My forecast is that, if food halls become a staple of every mid-sized or large American city, they will seem as banal and pedestrian as food courts are today. They will need to evolve, not just in appearance and tenants but in the broader culture they convey and the demographic they attract. Otherwise, the poke shop and banh mi house may eventually seem as routine as Sbarro or Auntie Anne’s. (We should all be so lucky.)

PrevAngled parking in Oregon: a solution in search of a problem?
Lidl Express: a broadly visible German grocer opts for an obscure American rollout.Next

7 thoughts on “R. House: a Baltimore food hall enters the scene on firm footing—but are the shoes a bit too comfy?”