Charging stations at DCA: another nail in the land line’s coffin.

On the way out of Reagan International Airport (DCA), beyond an assembly of baggage claim carrels, the arriving passenger encounters a metal fabrication mounted to the wall that undoubtedly looks a wee bit retro. 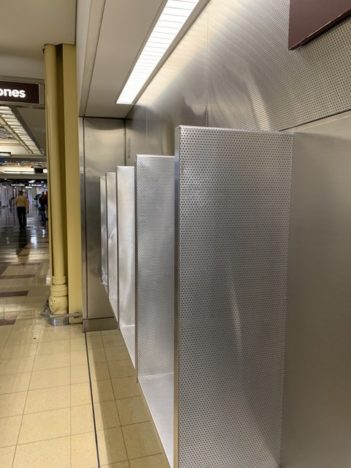 I have the sneaking suspicion that those under the age of fifteen may not even know what these bulky bookends formerly supported, but it’s pretty obvious to the rest of us. So what’s the use of a bunch of pay phones in a major airport in 2019? Here’s the answer. 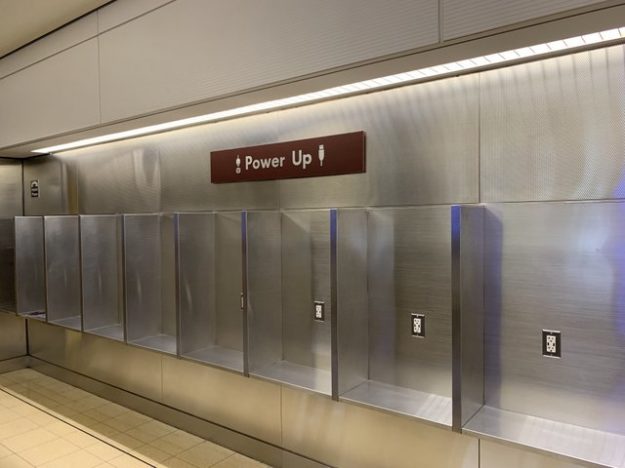 Not surprisingly, the administration at DCA has ripped them out and used the aperture that once housed telephone wires for a new electric configuration: sockets and outlets for charging cell phone batteries. And, to stay up to date with electrical conventions, these outlets don’t just harbor the two- and three-pronged varieties. 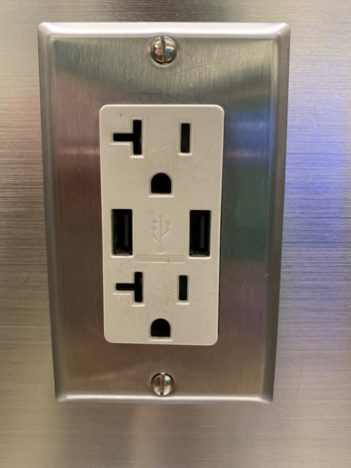 On the center-left and center-right, the outlet hosts Universal Serial Bus (USB) ports.

This transition makes perfect sense: pay phones are virtually obsolete in this era, to the point that the cost of operating them probably exceeded the quarters collected each month. During their sunset years, these pay phones at DCA most likely went days without a single user. Not only was it an unwise use of space, it failed to generate any revenue. Depending on how long it took the authorities at DCA to remove these phones, they might have been deteriorating. It was probably a decision, however, that didn’t come easily: after all, these replacement plugs generate even less money (none at all really), so from a capital improvement standpoint it’s a sunk cost. And, given that most people prefer to charge their phones while they’re already waiting for a flight—which explains why an increasing number of airports are featuring outlets at the seating near the departure gates—I’d imagine these phone charging cubicles get marginally more use than the pay phones. Perhaps they get some laptop users, who take advantage of the shelf space at the bottom of each metal cubicle, but even that’s imperfect: they aren’t really ergonomic for the average adult to use and type or stare comfortable at a monitor.

In the end, then, this replacement decision more about not losing money rather than earning it—not a very lucrative proposition, which probably explains why, at least as recently as last year, Chicago O’Hare (ORD) still offered pay phones. It’s also less efficient here, given that these charging cubicles space the plugs much further apart than charging stations or the kiosks up at the gates, which, if the airport authority doesn’t install them, the airlines themselves are happy to accommodate.

Regardless of who takes on the responsibility of meeting this demand, airports are constantly rearranging their interior space both to serve customers and to capitalize on that hulking piece of real estate, which often sprawls great distances to provide separation between the gates but allows sparse opportunities for making money. They do whatever they can. More ads. Shoe shine. Kiosks for pop-up vendors. So leadership at DCA probably still, at the very least, saw it as a better use of space that already featured electrical sockets than to waste all that juice for a bunch of conventional, tethered telephones. (The “Power Up” sign, in my opinion, is particularly lame; as though people need directions on what to do with these things.)

The phones are gone; that is, at least, with one exception: 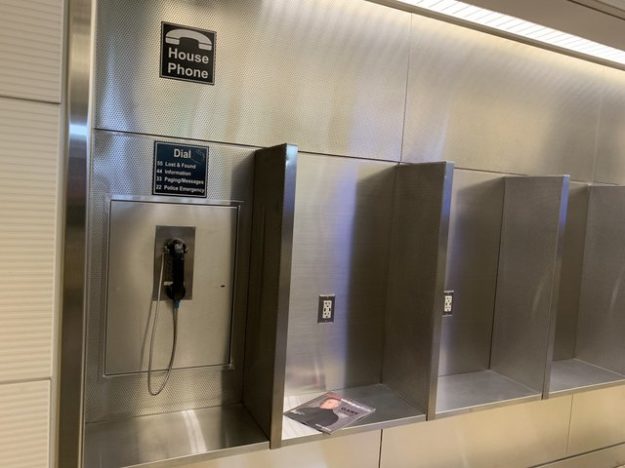 Then again, if technological advancements keep shifting to the point that airport guests demand some other infrastructure to power their gizmos, I have no doubt DCA will begin replacing out these charging cubicles once more. Just as advertising was more lucrative than artwork for IND, anything that generates money, however passively or marginally, is still better than one that does not. Therefore, these charging cubicles at DCA are an inferior alternative to the pay phone…of 1985, when demand was great. If that moment arrives—when consumer demand for some other product or supportive amenities emerges—expect that DCA leadership will rip out all this infrastructure for something new. Then again, given that increasing numbers of public and civic buildings in other countries have decided it’s lucrative to make people pay to pee (a charging gate before entering public restrooms), it’s only a matter of time before you swipe a credit card for 30 minutes of juice. Or maybe just use Apple Pay from whatever percentage points of battery are left on that iPhone.

PrevFloor Area Ratio in San Francisco: that city cannot be surpassed—but it can get topped off.
Angled parking in Oregon: a solution in search of a problem?Next

7 thoughts on “Charging stations at DCA: another nail in the land line’s coffin.”