The store featured in the image below isn’t likely all too familiar to many Americans, but it’s possible that it soon will be. 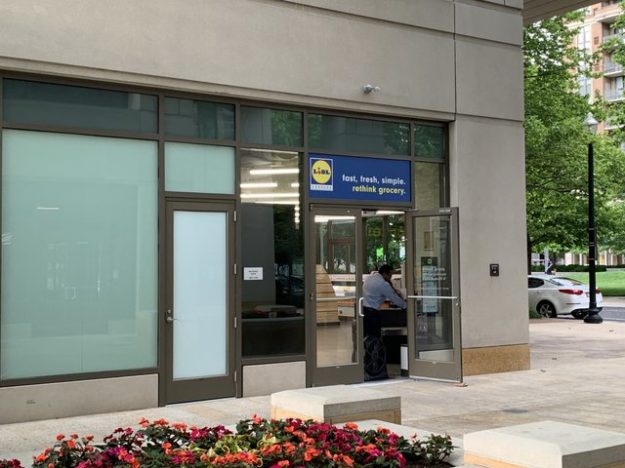 As far as I know, it’s the pilot location for a convenience-oriented spinoff of Lidl (rhymes with “needle”), a long-successful German grocer that has been scoping the American market for a point of entry. The company chose a small storefront, probably no more than 500 square feet, to feature this “Express” location. This exterior shot effectively captures the entire leasable space inside. 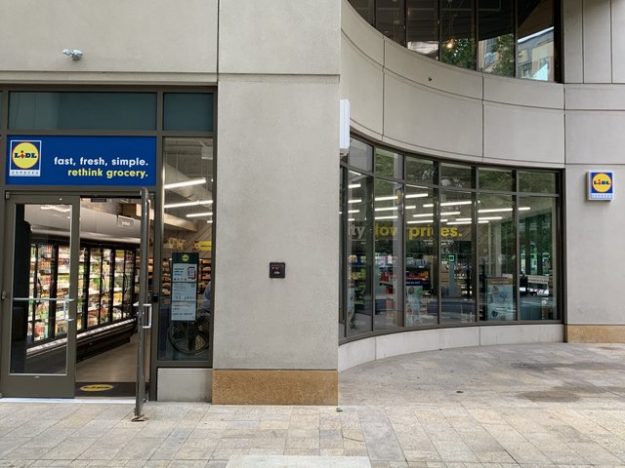 At this juncture, the Lidl brand is in steady expansion, with over 60 full-service grocers serving customers across the Mid Atlantic, from as far north as Pennsylvania and Staten Island, all the way down to coastal South Carolina, with a preponderance of openings taking place south of the Mason-Dixon. Lidl’s ambition to crack the American grocery market has been percolating for years, and the real expansion didn’t start until 2017, when 37 locations opened with modest fanfare throughout the summer. The American consumer can anticipate many more in the years ahead, though not at the breakneck pace initially expected; sales haven’t been as steady as the corporate leadership had anticipated, perhaps because the product offerings lean more heavily toward the corporate brand than most Americans typically expect at a supermarket. In other words, at a Lidl you won’t find too many cereals from Kellogg or Post; it will carry the Lidl logo. As a result, Lidl’s chief competition isn’t entirely clear: the quality of the merchandise might suggest a more upscale counterpart like Whole Foods or Wegman’s, but the aspiring ubiquity and price point is more akin to such mid-range chains as Food Lion, Giant, or Harris Teeter. One might also assert that it’s a comparably eclectic but not membership-driven counterpart to Costco. Regardless, though the Lidl expansion has slowed in the last year: the initial goal was 90 locations by 2019), but I currently count 66. Most reports suggest that Lidl’s presence in an area has forced nearby competitors to match its prices, so it’s clearly having an impact.

And now comes its pint-sized doppelganger: the Lidl Express. 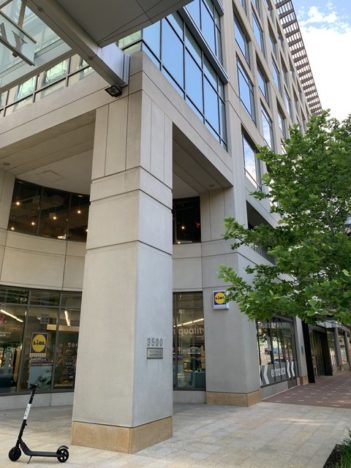 This location rests in Arlington County, Virginia, just across the river from Washington DC, just south of the busy, dense mixed-use area known as Crystal City (soon to feature Amazon HQ 2.0). By most metrics, it’s a logical site. It is also, to the best of my understanding, the only Lidl Express location in the country. It’s a pilot for the German grocer’s other big concept that it hopes to use to revolutionize convenience shopping in the States. 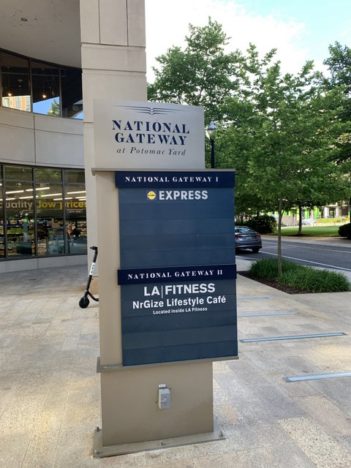 As is obvious from the photos, the Lidl Express sits at the base of a medium density array of offices and residences, in aggregate known as National Gateway. It’s directly across from a local gym, so consumers can easily grab a sandwich or a health drink after a workout. And it sits just off of busy Richmond Highway (U.S. 1), an area with an variety of suburban style retail tucked within the first floor various 5- to 15-story buildings, a configuration unusual for most of suburbia (though hardly uncommon in Arlington; I wrote about a Harris Teeter just south of this Lidl Express last year). It’s an area with high population an income density.

Despite all the socioeconomic advantages, the physical nature of this location still seems a bit odd, especially considering that it’s pioneering the Lidl concept at a smaller scale. Richmond Highway (U.S. 1) is a major thoroughfare through Arlington County, but this Lidl Express does not face the exterior where motorists can see it. 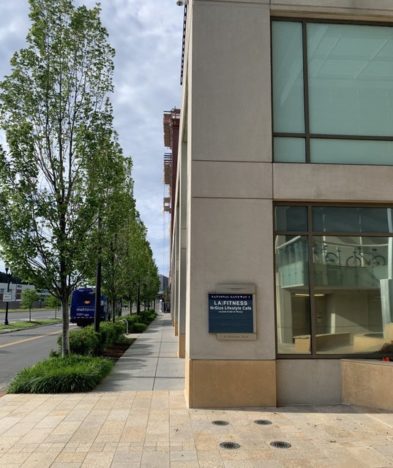 Instead, it faces the more pedestrian-scaled interior courtyard. Here’s the view immediately to the right of the exterior shots of the storefront. 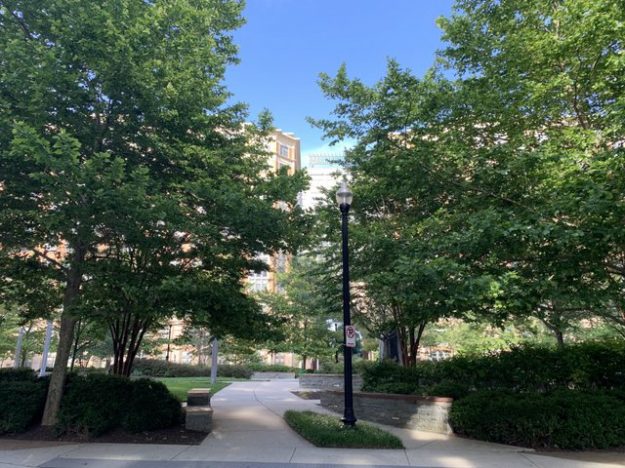 And here’s the view to the left of Lidl’s entry door. 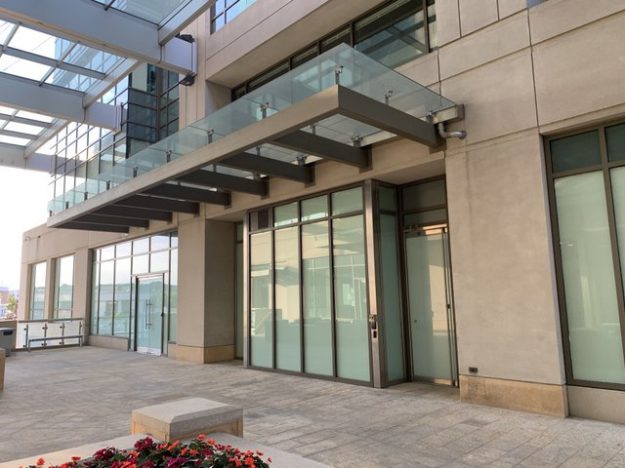 Not exactly a bustling retail scene. In fact, there’s little to nothing along Richmond Highway that reveals a convenience store; not a trace of that vivid yellow logo. 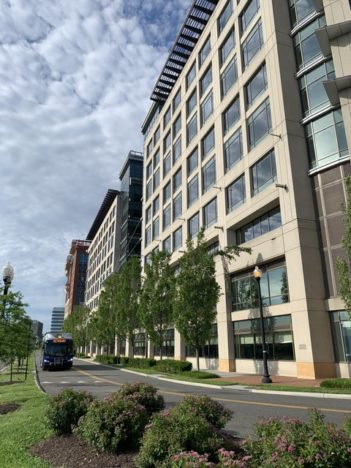 Yes, that is the building that houses this tiny store.  So while the company picked a busy corridor for its pilot location of Lidl Express, it didn’t select a particularly visible spot along that corridor. In fact, it will depend heavily on word-of-mouth and the high density of residences and offices within the National Gateway complex.

Perhaps this is the big reveal: Lidl America corporate is a tenant itself in National Gateway, just a few floors up in the same mammoth building. The brains that are engaging in demographic research, land negotiations, site control preparation—all of them are literally a stone’s throw away. The staff can witness firsthand how the intermittent customers at this Lidl Express engage with the spatial layout, the merchandise, and the amenities. To get a better sense of what might distinguish a Lidl Express from, say, a 7-Eleven, it helps to step inside. 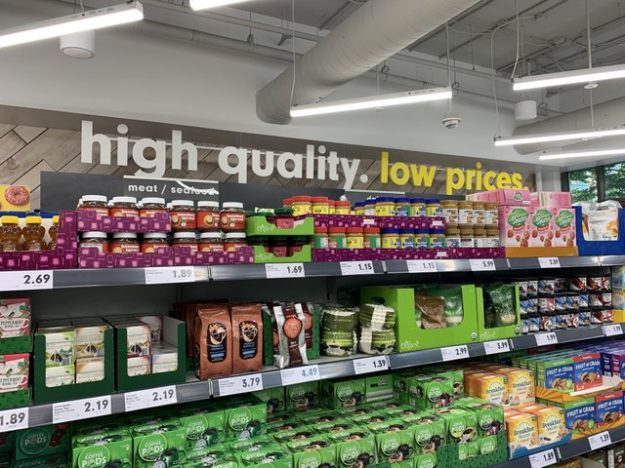 The prices are, from what I can tell, either on par with or up to 20% cheaper than those in a mid-priced grocery store in the Washington DC region, which makes them considerably cheaper than the typical convenience-oriented small retailer. Lidl rarely offers competing brands, and most merchandise (probably over 80%) carries the company name. The items tend to be a bit more eclectic than one might find at a Circle K; witness, for instance, the availability of hazelnut spread—an apparent hat-tip to the country’s German origins, where Nutella’s popularity long precedes and exceeds its presence in American pantries. This Lidl Express also featured kombucha, a product that has become widespread in middle-market American grocers (particularly in their natural foods sub-section) but not yet a staple of convenience stores, whose small leasable area requires selectivity on the particularly popular products. Kombucha wouldn’t pass that sniff test. 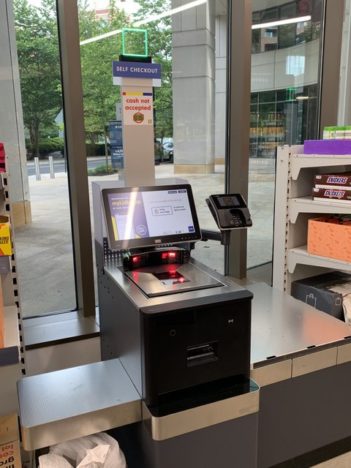 Here’s another quirk: this Lidl Express only features self-checkout stations, and it is cashless. It offers bags but does not make them conspicuous, thereby not encouraging them. Furthermore, these computerized stations do not accept currency. This store in Arlington featured a clerk, but he or she only helped restock, answer questions, and keep the place clean. Such a feature works better on this side of the Potomac River; over in Washington DC, the council has considered legislation prohibiting retails from going cashless, claiming it discriminates against people who lack access to credit or debit. For those jurisdictions that still allow it, cashless convenience stores are increasingly popular because they reduce the need for armored vehicles and they promote the safety of workers—a critical concern in convenience stores, which typically suffer high rates of armed robbery. As long as the legislative climate in Arlington does not change, the Lidl Express is likely to seek any possible new strategy for cutting costs; should these smaller outfits prove successful, it wouldn’t surprise me if they soon go unstaffed, relying on cameras and scanning to monitor the integrity of the customer.

If some of these tactics seem vaguely familiar, they might evoke a better-known discount grocer brand: the now omnipresent Aldi, also German in origin. Long successful in the US and rapidly growing, the chain that makes its customers “rent” a shopping cart for a quarter has applied distinctive cost-cutting measures: a visibly smaller floor space (often in working class neighborhoods), carefully cultivated merchandise that quickly gets pulled from the shelves if it sells badly, forcing the customer to bag his/her own groceries, and charging extra for in-store bags. In German, Lidl and Aldi—nearly anagrams of one another’s names—are fierce competitors, and the latter hopes to replicate Aldi’s resounding success.

But with all that time and energy devoted to both site selection and a carefully cultivated, no-frills, hyper-efficient operational experience, why would Lidl American choose such an inconspicuous location for its pilot location of the Express model? 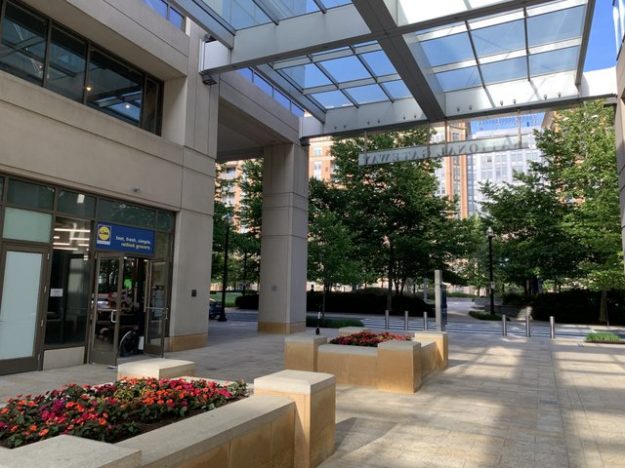 I think there’s a micro-level and micro-level explanation. At the micro-level, the store’s physical orientation is strategic: the aforementioned safety concerns regarding convenience stores are broadly known in the US; unfortunately, cashiers at convenience-oriented gas stations have among the nation’s most unintentionally dangerous jobs. The obscurity means this Lidl Express is a word-of-mouth demographic that is invariably higher income, given the white-collar nature of most of Arlington County. A low-crime, comparatively obscure location will allow the corporate leadership to monitor the self-checkout kiosk, the cashless approach, the merchandise that attracts the most curiosity (versus those items that actually sell well), and, I’m willing to guess, the eventual elimination of staff during the off-peak hours…and “off-peak” will be most of the time.

As for the macro-level, it isn’t coincidence that Lidl Stiftung & Co. KG has chosen Washington DC to pilot this concept. It’s a strategic test market because of the inordinately high percentage of people who live there that hail from elsewhere in the country. Small chains known exclusively in the Mountain West, the Upper Midwest, New England, the Deep South, or Just Texas—metropolitan DC is a coveted stepping stone as these brands expand from their regional focus to more national ambitions. It makes sense; regardless of whether the first location comes from Minnesota or Mississippi, a brand can rest assured that the DC metro will feature a core segment of “expats” who grew up with it—an emissary as it scours the country. And DC is not just strategic for American brands: as an alpha city of global importance thanks to its presence of both multinational private companies (particularly consultants affiliated with the defense industry) and global-oriented NGOs, DC is among the first places that international brands go when seeking to enter the American market. Among the examples: UK-based Pret a Manger, Parisian bakery Paul, and South African Nando’s Peri-Peri. Outside of a few major American metros, these fast-casual restaurant brands would cause most to scratch their heads; they are all widely known in DC. Their corporate leadership wisely chose DC as an early opportunity to crack the American market, thanks to its high educational attainment and cosmopolitan workforce.

It remains to be seen if Lidl will achieve the same ubiquity and success as Aldi. Judging from the challenges faced with a decentralized rollout of full-scale groceries across the eastern seaboard, the corporate leadership might have proven itself overzealous. Despite initial evidence that suggests this National Gateway location in Arlington to be unnecessarily obscure, I suspect it involved considerable forethought. It’s a different concept from hugely popular Costco, or Harris Teeter, or Trader Joe’s, or Aldi for that matter, but it fuses the strategic successes of each of them to achieve something on its own, which can clearly compete with 7-Eleven in those neighborhoods where the population is savvy enough to go for the recherché products—and Arlington offers the favored demographics. While I anticipate we will see more Aldi Express locations in the years ahead, don’t expect them to be easy to spot unless you live in a fancy area—an even then, it may take word-of-mouth to learn exactly which corner has the big yellow circle tucked away.

PrevR. House: a Baltimore food hall enters the scene on firm footing—but are the shoes a bit too comfy?
The Sanctuary (First Lutheran): soon to be an article in the Digital Encyclopedia of Indianapolis.Next