Angled parking in Oregon: a solution in search of a problem?

The affable little city of Corvallis (approximate population of 55,000) has a lot of things going for it: a large and prominent university (Oregon State); a downtown within walking distance of the big school, replete with locally owned retail (a real oddity in 2019!); a fortuitous location along the state’s prominent Willamette River and only an hour’s drive from the Pacific Coast; a robust park system within the city limits and the unspoiled deciduous and evergreen blend from state parks all around it; and the sociological bragging rights of a central location in the Pacific Northwest, one of the most desired regions to live…but without the high housing costs of big-city counterparts like Portland and Seattle. 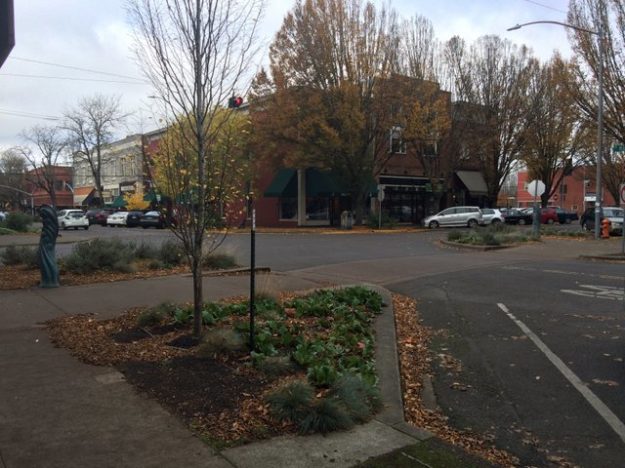 Okay, I confess: if it wasn’t obvious already, basically all the advantages to Corvallis I just listed have to do with the where, not the what or who, and certainly not the why. But it’s the best that can be expected from my 14-hour visit, only half of which were conscious. Nonetheless, I was able to absorb what I did in the paragraph above, and only half of it from looking at a map; much was empirical. And I was also able to conclude that, now matter how much the state of Oregon earns accolades for its innovative urban and regional planning solutions, Corvallis isn’t likely to lead the charge. Some would assert that award goes to Portland; others would argue that the award goes to Multnomah County (home of most of Portland’s suburbs and part an Urban Growth Boundary); still others would claim the entire State of Oregon wins for its rural and farmland preservation initiatives; lastly, a few might assert that the real innovator is south of Corvallis in Eugene, home of University of Oregon (and one of the state’s major Community and Regional Planning programs.)

These sundry designations leave Corvallis adrift. Lacking the intellectual heft of any real homegrown urban planning scholarship, it still no doubt punches above its weight class. But there are some peculiarities that defy any real description, like this one on Madison Avenue downtown: 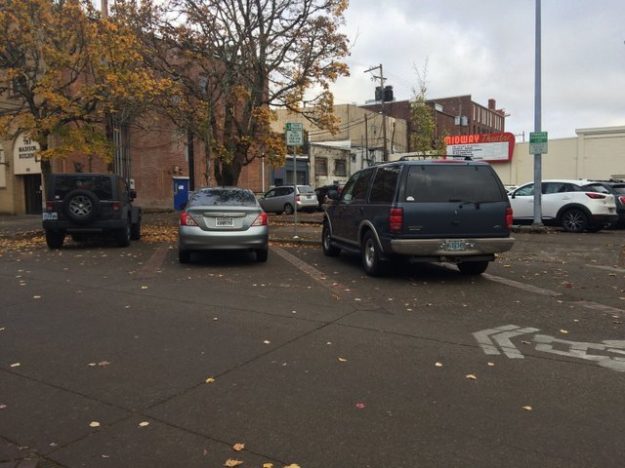 Witness the angled parking along the road, going with the flow of traffic, as indicated by both the bicycle “sharrow” in the lower right corner, and the fact that the cars are facing outward. They drove in their lane, then made a soft right to park in those spaces marked by bricks embedded in the asphalt. No big deal. But take a look at some of the other markers. 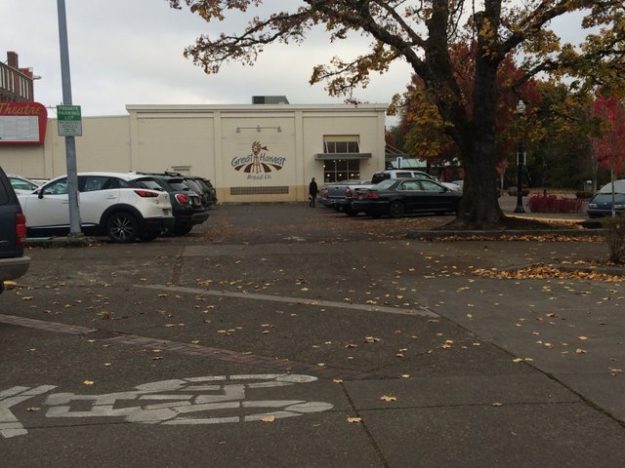 A partially paved-over painted stripe. Looks like part of a beautification program, where the City decided bricks make a more attractive (and more permanent) demarcation than paint for that angled parking.

Again, no big deal—except that the opposite side of Madison Avenue is far less straightforward. 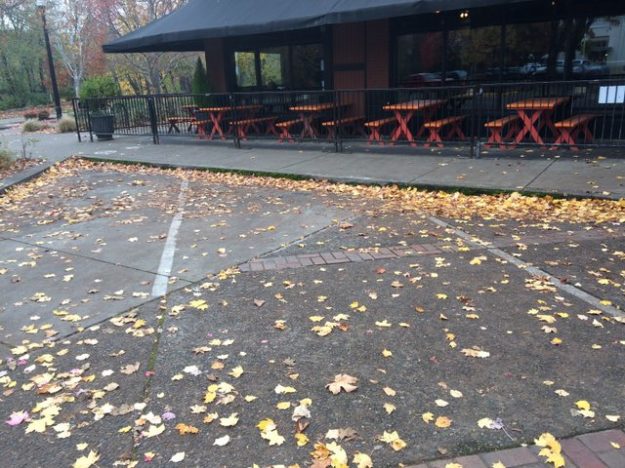 Over here, we have both stripes and bricks, angled in opposite directions. Which came first? Did the Public Works Department install the bricks, only to find they weren’t conspicuous enough and then added the paint stripes? That certainly what would appear to be the case, since it’s unlikely the paint would be so prominent if they ripped up the pavement to install the bricks. This predicament begs the obvious question: which set of lines do the motorists recognize? Pivot a few feet to the right and it becomes clear. 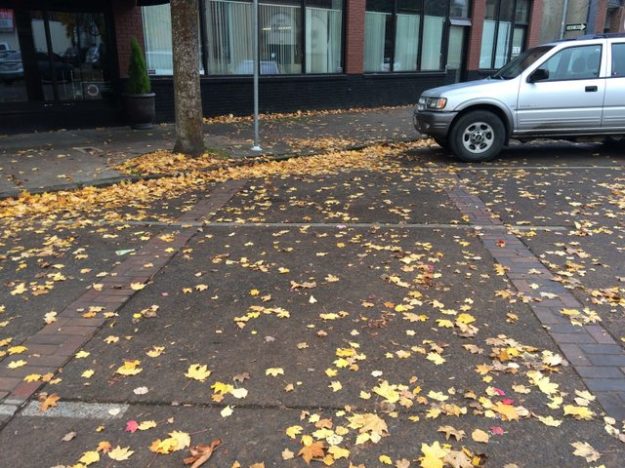 The vehicle is using the painted stripes–not the bricks.

So, depending on which direction one is traveling on Madison Avenue, the driver uses brick or disregards the brick and uses the stripes. This Google Street View from spring of 2018 (my own pics obviously come from the fall) merely reinforces that arrangement.   One might assert that the brick really proved unsatisfactory; after all, it’s hard to imagine it’s that easy to see at night. But if it’s so ineffective, why wouldn’t the Corvallis Public Works Department restripe both sides of the street, therefore allowing paint to trump brick in all circumstances?

My suspicion is that the brick was part of an attempt to pilot an increasingly common yet polarizing traffic safety device: to use reverse angled parking on one side of the street. In medium density urban settings, angled parking is common and often quite desirable because motorists find it far easier to use than parallel parking, and it’s less disruptive to the existing flow of vehicles on the primary cartway. Businesses like it because it allows more on-street parking spaces than parallel parking, due largely to the reduced need for curb space to accommodate a single car. Meanwhile, urban planners and traffic engineers generally dislike it because it results in devoting considerably more of a potentially small-scaled urban road to parked cars, and pulling out of an angled parking space backwards is often hazardous, due to limited visibility imposed by the adjacent parked vehicles.

Reverse angled parking (also called, among other things, back-in angled parking) attempts to fuse the best of both worlds. The more challenging moment is entering a parking space, since the driver has to back into a stall. But this configuration also means the nose of the car (and, therefore, the car’s operator) is closer to the cartway and traffic flow, so exiting a space is a breeze. And, once the motorist becomes proficient in the idea of reversing into a parking space, the entire process is safer overall.

But reverse angled parking has its serious detractors. Many have asserted that the act of backing into a stall, with busy traffic passing or queuing up behind, is just as difficult as parallel parking. And while most cities’ traffic studies suggest that fewer accidents take place on the pilot projects than with conventional, head-in angled parking, it could just as easily be due to the fact that people are scared off by these small (usually one- or two-block) pilot programs and decide to park elsewhere—a consequence that can be awful for the adjacent businesses that front the on-street angled parking.

It is evident that, at this point, this block in Corvallis does not feature reverse angled parking. The bricks attempted to promote the practice on one side of the street, it flopped, and the City striped over the bricks to allow conventional parking. (The only other plausible explanation is that Madison Avenue was one-way at one point in time and the city converted it to two-way.) This article may seem (like so many of my musings) to make a mountain out of a molehill, but even an urban fix as humble as changing the angle for ten parking spaces can require on-the-fly adaptation to change—something that causes resistance even among the neophiles. I think more cities are going to double down on this technique so that, like roundabouts, they eventually become common enough that they fail to elicit such a strong reaction. In the meantime, Corvallis can continue doing its thing, and even if elsewhere in Oregon promises greater urban planning innovation, at least this low-key city can (for now) still boast a disproportionate number of downtown mom-and-pop clothing stores—a real anomaly worthy of discussion on its own…but we’ll save that for another night of story time.

PrevCharging stations at DCA: another nail in the land line’s coffin.
R. House: a Baltimore food hall enters the scene on firm footing—but are the shoes a bit too comfy?Next

8 thoughts on “Angled parking in Oregon: a solution in search of a problem?”