The Wharf of Washington DC: the shopping destination of the hour (but not the day).

Ever since it opened in late 2017, Washington DC’s mixed-use waterfront development known as The District Wharf (“The Wharf”) has become a premier attraction for locals and visitors who are in the know. Unlike so many riverfront investments in recent years, it doesn’t look like a single developer conceived it, even though it owes most of its existence to a partnership between two developers (as well as a nine-figure public subsidy). Occupying a quarter-mile stretch of the Potomac River that was long underutilized prior to this complete reinvention, The Wharf has infused a surge of residential density in Southwest DC, the smallest of the district’s four quadrants. With a prime location—the closest, privately owned expanse of riverfront property from the National Mall—it features some of the most expensive multifamily real estate in the city. Not only is the Washington Monument within walking distance, The Wharf’s got the Tidal Basin, the Southwest Waterfront Metro Stop, the numerous offices of l’Enfant Plaza, and two sports parks: Audi Field (soccer) and the Nationals Stadium (baseball). 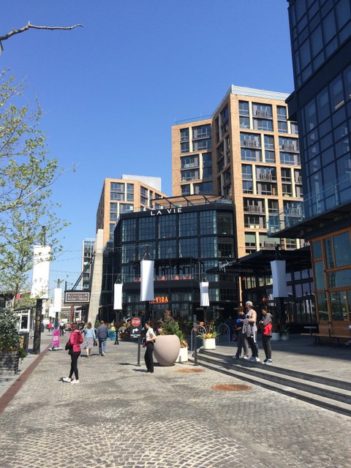 Here’s a view from one of the piers protruding onto the Washington Channel, the man-made tributary of the Potomac leading to the famous Tidal Basin, which has long served as the primary harbor for DC’s house-boat community. 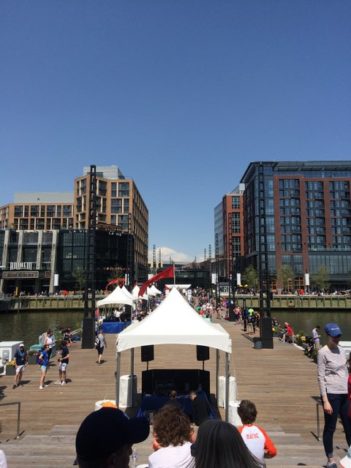 Even though the first phase of The Wharf (a second phase is forthcoming) consists of several hulking mixed-use buildings and a few small ancillary structures that all opened simultaneously, the façades show enough variety and the configuration enough reverence to the traditional street grid that the whole undertaking feels much more organic. It doesn’t look at all like a conventional town center development undergirded by a festival marketplace, even though that is largely what it is. And while the centerpiece of the linear undertaking is indeed the boardwalk along the Potomac River, the developers oriented plenty of activity elsewhere throughout these carefully situated juggernauts, with restaurants and retail on both the short, interstitial stub streets leading to the boardwalk… 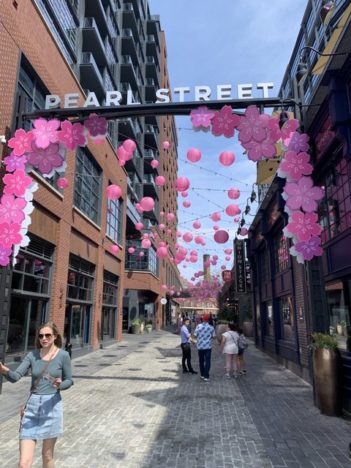 …as well as the interior frontage along Maine Avenue.

The Wharf’s predictable popularity, however, arrives concomitant with the less predicted retail apocalypse—a colossal, nationwide shift away from bricks-and-mortar establishments, particularly those that sell durable goods such as apparel. The developers themselves couldn’t have predicted it would get this bad while hatching plans for The Wharf, but, although a revitalized city has enjoyed a surge of population growth, particularly among well-heeled professionals, the shopping culture hasn’t experienced a similar renaissance. Elsewhere in the District, other high-end restaurant-and-recreation corridors have felt the pinch: Georgetown in particular (the city’s most established waterfront commercial district) has lost some of its clout and many of its credit tenants, as up-and-coming districts lure high-caliber merchants. These districts include CityCenterDC, Dupont Circle, 14th Street and Logan Circle, and now The District Wharf. As has been the case in the U.S. for decades, there’s simply too much retail space and not enough tenants—a situation that has finally reached a tipping point as more national brands focus their efforts online.

Even with its visibility and proximity to the tourist bustle of the Smithsonian museums and the National Mall, the commercial space at The Wharf is hardly shooing away tenants. Several of the leasable spaces—particularly those along Maine Avenue, away from the riverfront—have yet to snag a retailer. By no means does it feel like it’s struggling—on a good day the area is packed to the gills—but Americans may simply turn a blind eye to all the vacancies because we’re used to that kind of thing. Someone coming from another country will see all the “FOR LEASE” signs and think something’s wrong. But that has more to do with our ridiculous oversupply of retail/commercial real estate—the most inflated per capita ratio of any country in the world—and a paucity of suitable tenants.

And thus, despite The Wharf’s obvious successes, we get scenes like this: 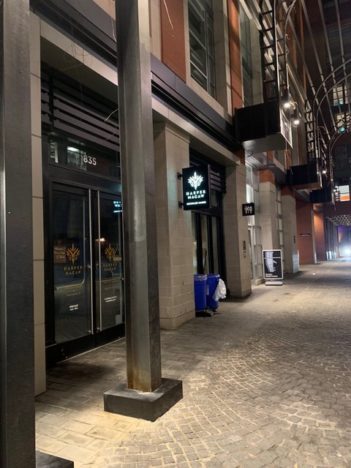 From a quick online scan, it’s safe to conclude that Harper Macaw is a local chocolatier, with a single bricks-and-mortar outlet, here at The Wharf.  By the overall standards of this waterfront campus, the location is obscure. 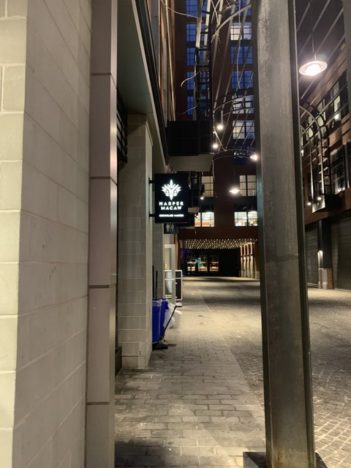 It is neither on the pedestrianized promenade (Wharf Street SW) or the auto-oriented arterial (Maine Avenue SW), nor is it on one of the block-long streets that connect the two. It’s on little more than a service drive branching off of one of those block-long stubs, and it’s the only storefront with ingress on the little-used Water Street SW. The space seems to be carved out specifically to cater to a less capital-heavy, mom-and-pop tenant. It’s neighboring retailer, New York-based Milkbar, boasts a corner and much greater prominence. 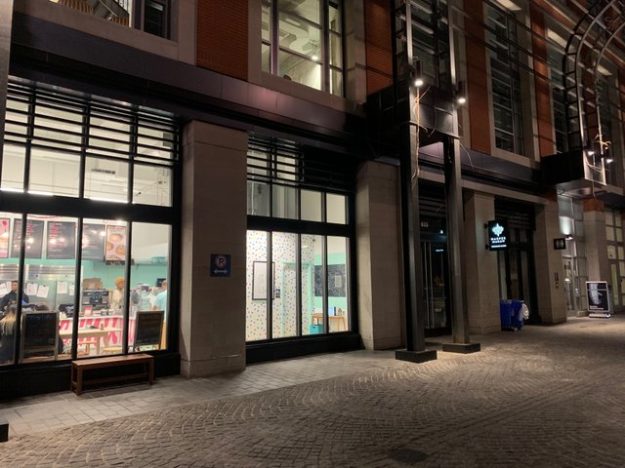 Here’s that same location if I pivot about 180 degrees. 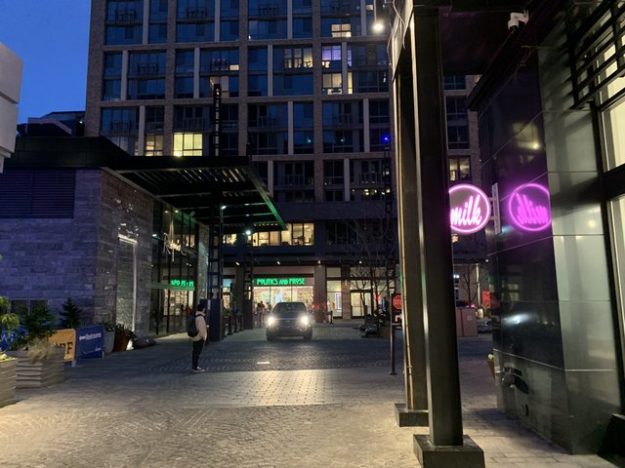 Obviously it’s not far from the heart of The Wharf’s activity; if I walk up to that intersection and pivot to the right, I’m at another node within seconds. 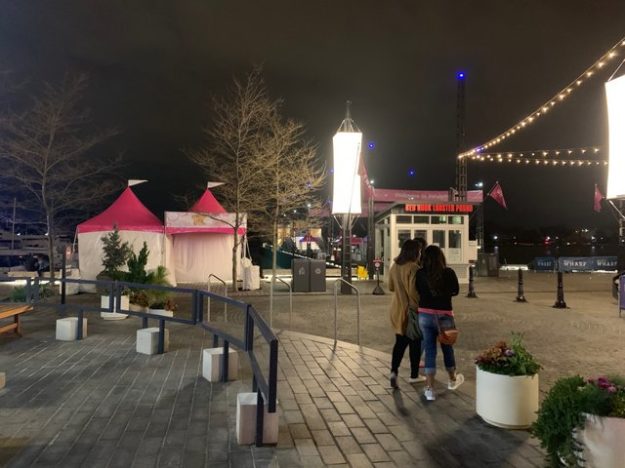 But most of the other retailers on this Sunday evening were open, while Harper Macaw was closed. Could it be that the off-the-beaten-path location, however slight, is a disadvantage? A quick peek at the storefront essentially confirms this. 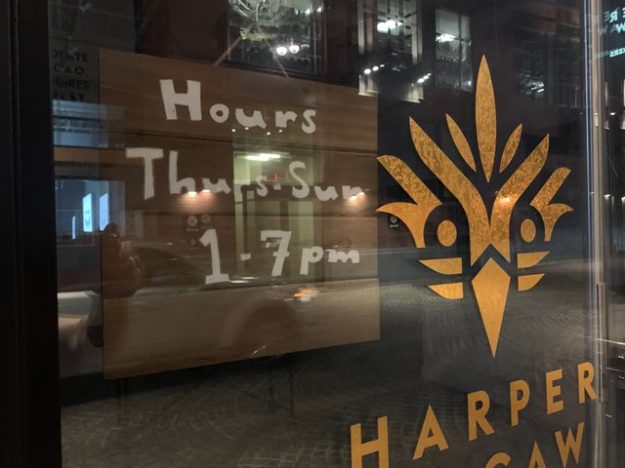 It closes early, opens late, and only operates four days a week. A business that only operates 24 hours in a week has limited hours by any metric. But that’s not all. 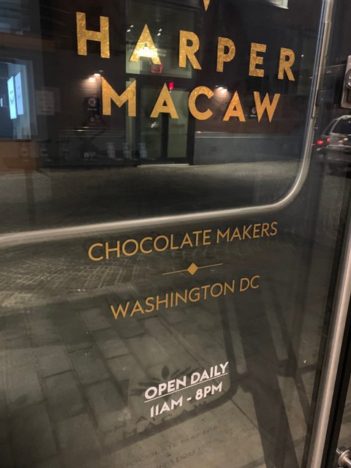 Notice the decals at the bottom of the doorway. The more permanent, intended hours are much greater: 63 per week. The business has overridden its own plans to adapt to fewer visitors than anticipated.

This isn’t the first time I’ve written about how businesses clearly modify their hours when a revitalized shopping district fails to meet expectations in terms of the volume of customers. It’s both a logical response to exogenous factors outside the proprietor’s control, and it’s a survival tactic. It’s possible that Harper Macaw is merely a pop-up shop; some online evidence suggests this. It’s also possible that Harper Macaw will ramp up its hours as the weather warms. But these photos come from the same day as the Cherry Blossom Run and Festival, a very busy time for DC in general and the waterfront in particular. Yet it still couldn’t stay open, in an edgy, well-designed new tourist district with high residential density (and very high incomes). No doubt the space Harper Macaw chose to lease was smaller and much cheaper than a prime corner along the riverfront, but the significantly reduced hours also further substantiate the conditions facing urban districts throughout the country, as they revitalized themselves toward a leisure-oriented lifestyle…only to find that one of American’s great recreational pastimes, shopping, no longer takes place while walking along pleasant commercial streets with our stylish paper bags. We do it, seated, staring at a glowing rectangle. And Amazon Prime brings it to our door within 36 hours.

PrevSky Stage of Frederick: when a building becomes more profitable when they lop off the top.
Counter cultures: when the barista at one Starbucks…can peer through the window from another.Next

10 thoughts on “The Wharf of Washington DC: the shopping destination of the hour (but not the day).”