Counter cultures: when the barista at one Starbucks…can peer through the window from another.

The ubiquity of Starbucks locations in America’s dense urban centers is a running joke, and it’s not even a new one. The insufferable yuppie couple of the 2000 movie Best in Show famously joked about it: “We met at a Starbucks…not the same Starbucks. But we saw each other at different Starbucks across the street.” And while, at that point, they most likely are referencing a major city—I think Meg and Hamilton Swan hail from a fictitious suburb of Chicago—at this point it could easily be a much smaller one.

If I stand in the dead center of my hometown of Indianapolis—right at the iconic Monument Circle—I can indeed easily see two Starbucks, when pivoting slightly. One of them—just to the east of the Circle—is a longstanding corporate location, and one so successful that to this day it remains jam-packed up until it closes at midnight. The other, to the north of the Circle, is affiliated with a Sheraton Hotel and thus is almost definitely not part of Starbucks corporate. So I guess that’s not quite the same as “different Starbucks across the street.” But it’s close.

The SoMa (South of Market) neighborhood of San Francisco, denser than downtown Indianapolis by multiples, offers a coy juxtaposition that Hamilton and Meg could easily have embraced, toting along their Macs and their J. Crew catalogues. Or L.L. Bean. 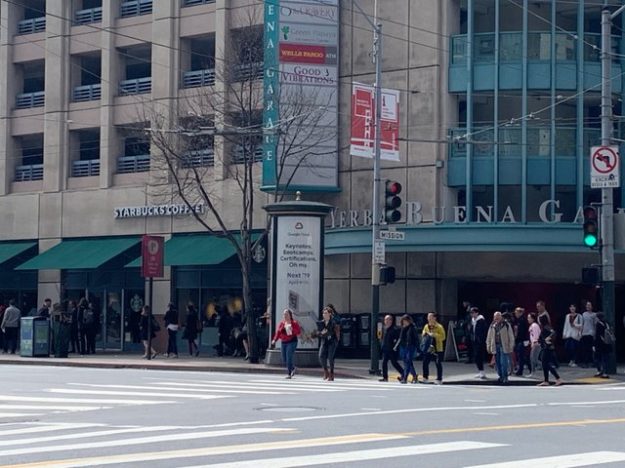 This location, in a multi-story parking garage, sits at the southwest corner of 4th and Mission streets. And sixty feet away, at the southeast corner of this same intersection, we espy another. 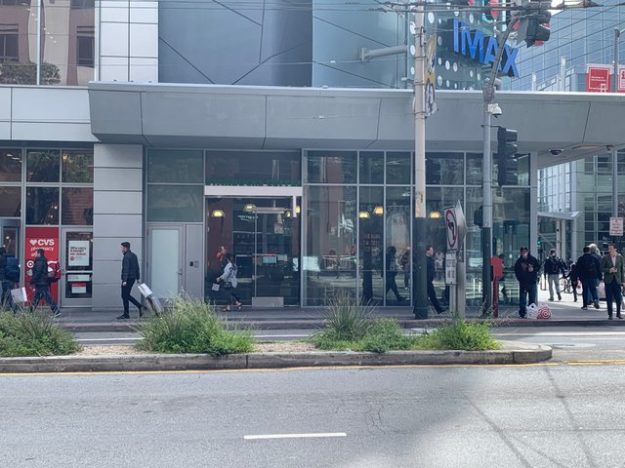 The brand isn’t so conspicuous on this location, but the telltale green lettering projects itself from the awning above the central door. Due to the shadows, it’s very hard to see in this photo (unfortunately), but it’s a Starbucks. It would genuinely be feasible to sit in one Starbucks and wave hello to a friend in the Starbucks across the street.

Why on earth would a company allow for such self-defeating positioning of its own brand? To be fair, the reasoning for these two proximal Starbucks in San Francisco is hardly different from Indianapolis. The first appears to be another Starbucks corporate location, while the second is affiliated with another popular yuppie retailer. 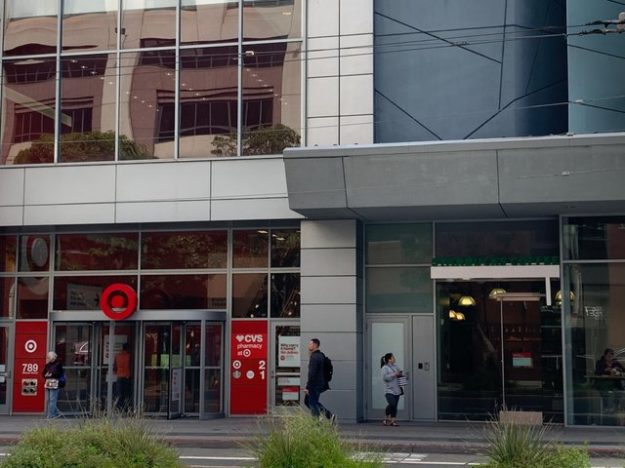 The longstanding partnership between Target and Starbucks has essentially mandated that every location of the discount department store feature a location of the coffee shop near its entrance. This particular Target, like most urban locations, requires customers to ascend an escalator to reach the merchandise. But the Starbucks itself is at street level, with an entrance directly from the street and another from the interior near those escalators. 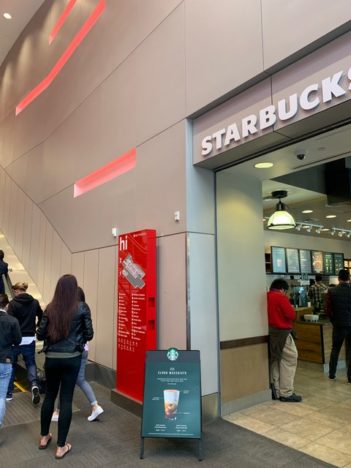 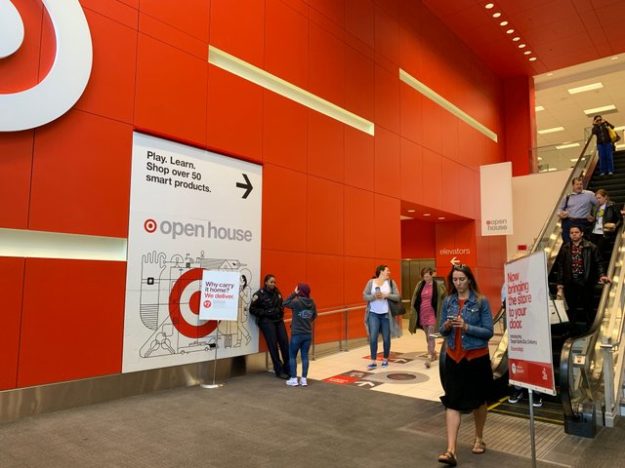 Few other brands could pull this off, and even Starbucks might not do this without good reason. These SoMa locations, though, are less than a block from the Moscone Center, San Francisco’s expansive, multi-block convention center. And convention goers aren’t known for their adventurous proclivities; they like familiar names. I’d imagine conventioneers themselves could easily sustain both locations, and if they couldn’t, the one on the southwest corner (unaffiliated with Target) would probably fold. And, at the Indianapolis pairing, the same condition probably applies: both locations are just a few blocks from the city’s convention center, and I’d presume Sheraton has a similar partnership as Starbucks with the omnipresent coffee chain.

Regardless of the economic performance of these spitting-distance Starbucks, their co-existence bespeaks the lumbering inefficiency of corporations as they grow. If Starbucks franchised its locations, no rational franchisee would pick a spot where another location would siphon revenue. But Starbucks corporate owns, operates or forges partnerships to create all American locations, the arrangement with Target almost certainly functions under an entirely different arm of the business than the strategic location of freestanding locations. And we witness “mirroring” as a result. Even for a company as successful as Starbucks, it’s a manifest inefficiency—one that a smaller, regional chain (say, Dunn Brothers or Biggby or La Colombe or CC’s) could hardly afford. But the Seattle chain is approaching “too big to fail status”—visible enough to elevate its founder and CEO, Howard Schulz, toward a presidential bid. And if some catastrophic misstep ever dethroned the coffee giant, San Francisco could still manage with a mega-chain all its own: at this point, Berkeley-based Peet’s Coffee is forging a name as Starbucks’s biggest competitor. The Wendy’s to Schulz’s McDonald’s. And probably the only other coffee brand besides Starbucks corporate that could credibly host locations across the street from one another. Maybe the next generation of Meg and Hamilton Swan will meet (cute) at Peet’s. At least if they pull out their Mac tablets at a Peet’s, they’d be honoring not one but two San Francisco-based brands.

PrevThe Wharf of Washington DC: the shopping destination of the hour (but not the day).
Tsunami tsignage: where to turn when the tidal tsurge tstrikes.Next

7 thoughts on “Counter cultures: when the barista at one Starbucks…can peer through the window from another.”