Floor Area Ratio in San Francisco: that city cannot be surpassed—but it can get topped off.

In this era of widespread downtown redevelopment, it’s easy to find before/after scenarios that effectively demonstrate how Floor Area Ratio (FAR) works to capitalize on an increasingly valuable piece of urban land. Typically, all one has to do is compare a photo of a forlorn part of a big city’s downtown in 1995 and compare that same location with a photo from 2015. Sometimes we can even use a ten-year interval, manifested through the archived photos from early Google Street View, compared with the most recent iterations. Take this example in the fashionable Fountain Square neighborhood just southeast of downtown Indianapolis. Lots of mid-rises replacing either low-rises or mere parking lots.

It’s pretty basic, really: if developers have the opportunity, they will typically seek to maximize their revenue-generating opportunities by building upward, and they’re far more likely to pursue this on a high-value piece of land than on a low-value one. Sure, it costs more to build taller, but they usually have far more to gain through the economies of scale: by extruding, the developers are creating more opportunity to capitalized space on that humble little parcel. Therefore, the squat, underwhelming one-and two-story buildings that proliferated in distressed urban centers during the 1970s and 80s—a low point for urbanism in the U.S.—now sit on desirable urban parcels, and most developers can find something far more useful than, say, an ailing old drive-thru restaurant or an uninspiring little strip mall. The developers demolish the old building and construct a three- or four-story (or five or six) apartment building, with retail on the first floor. In an era when downtown living is tres chic and these new denizens want to walk to their amenities, a drive-thru Wendy’s is not the highest and best use of land. And even in cities with very high automobile dependency—places that will need parking to support a multi-story building—a Floor Area Ratio of 3.0 or 4.0 is still perfectly when in reach.

Now, if you’re the most expensive city in the country, the opportunities to capitalize might just be a bit more extreme. 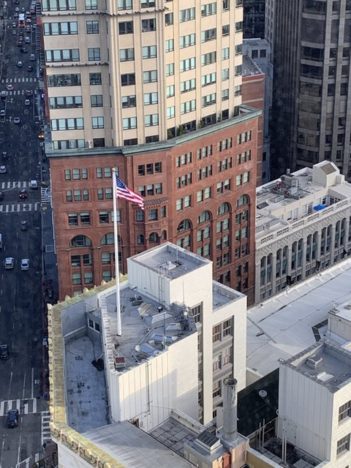 On the edge of San Francisco’s financial district, a beige (sandstone?) building sprouts up on the top of a brick one. The historic name of the brick structure is the de Young Building, though most locals referred to it as the Chronicle Building, since the Burnham & Root-designed 1890 structure—San Francisco’s first skyscraper—housed Henry de Young’s publication, the San Francisco Chronicle, which remains the city’s newspaper of record to this day. The Chronicle relocated in 1924, and the de Young Building’s fortunes slowly declined by mid-century, to the point that, in 1962, the owner clad the mighty brick with aluminum and porcelain panels, which remained on the structure until 2004.

Then, three years later, the Ritz-Carlton (current owner) converted it into the Club and Residences, expanding its Floor Area Ratio from approximately 11.0 to 24.0. 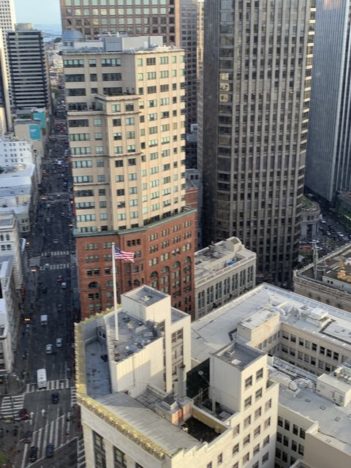 That’s right: the investment nearly doubled the total leasable area. I use the qualifier “approximately” because I don’t think it’s a perfect 24.0 anymore; since the expansion floors are offset from the de Young Building’s floorplate (no doubt to make this expansion less intrusive), it’s not replicating the scale of the original eleven floors. And these setbacks help minimize the visual impact of the addition from the street level, even if architecture critics have formed a different conclusion about the overall result.

That said, regardless of what one thinks about the outcome, the resulting Ritz-Carlton Club and Residences is a remarkable achievement from a Floor Area Ratio standpoint: an existing structure, designed well before the automobile, can support a complete overhaul and thirteen additional floors, with no additional parking provision on the parcel. No tiny surface lot. Clearly this development owes a great deal to the high population density and above-average transit of San Francisco. And those conditions, in turn, owe much to the high land values of this geographically constrained metropolis. Or is it more that the high land values are a byproduct of density and good transit provision? No matter. It’s not an addition we can expect to see in anything other than alpha cities, which may only include New York City at this echelon. Historic preservationists will continue to cavil about the non-conforming, uninspired stacking of all those extra floors, but the de Young Building a triumph of added value, further supporting the notion that—as long as legal constraints are light and the market will bear it, the average developer would happily recreate Babel in a city whose demand and appeal transcends cultures and languages.

PrevContraflow: when compared to people or cars, salmon still have it the toughest.
Charging stations at DCA: another nail in the land line’s coffin.Next

13 thoughts on “Floor Area Ratio in San Francisco: that city cannot be surpassed—but it can get topped off.”