Contraflow: when compared to people or cars, salmon still have it the toughest.

It’s hard not to wonder if there are unspoken rules that explain why well-moving vehicular traffic operates in much the same configuration as human crowds in a congested, spatially constrained setting. Which came first? Well, humans/pedestrians obviously. But vehicular motion remains subject to numerous regulations in the interest of safety for pedestrians and other vehicles. Even though the pedestrian preceded the car (and the stagecoach), it’s still worth pondering what impels us to behave much like cars when forced in a crowded highway or sidewalk, sometimes almost instinctually and with little authority. For those who might assert, “We’ve always done this, and we modeled our rules for cars on roads after how we walk in hallways,” I would concede this point, but the remaining 90% of the time we move freely, yet snap into formation when a situation emerges. With no prodding whatsoever. Why? If the halls of an academic building go from nearly empty to teeming with bodies during a passing period, we know to shift ourselves to the right side of the hall (the “road”) to avoid an altercation, even though—unless a school is replete with hall monitors on every corner—we are unlikely to face a citation for violating this rule. (Presumably in the UK, Australia, South Africa and other commonwealth nations, they walk on the left side of a hallway?) At a T-shaped intersection, we also, with little to no direction from a higher authority, seem to know to yield to the crowds in free flow; we cannot logically expect them to yield to us.

Perhaps these self-regulatory tendencies seem instinctual because they are the status quo and are easy to conceptualize. But if we envision other scenarios—those where pedestrians defy the rules of behavior that we impose on moving vehicles—we easily encounter firsthand examples of human fallibility.. Take, for example, the moving platforms we now find in most major airports. Slower moving or stationary pedestrians are supposed to remain on the right, yielding the left to those in a hurry, much the same we expect vehicles to pass on the left. But rarely is this uniformly the case: typically a fast moving person will try to pass on the left, only to encounter a dazed individual carelessly occupying the middle. (This situation applies to both cars and pedestrians standing on a moving platform, since, at least in the U.S., passing on the left is understood but rarely enforced.) If the speed-demon gets right up to the other person’s back, usually he/she will defer to the right, allowing passage. But it’s rarely as efficient as a group of middle schoolers in the hallway during a passing period. And we’ve all experienced or witnessed tailgating among impatient drivers on a four or six-late freeway.

We encounter this same inefficiency (or carelessness) on a lot of escalators. But at least one facility—the Moscone Center, San Francisco’s primary convention center—seems to have found a reasonable solution. 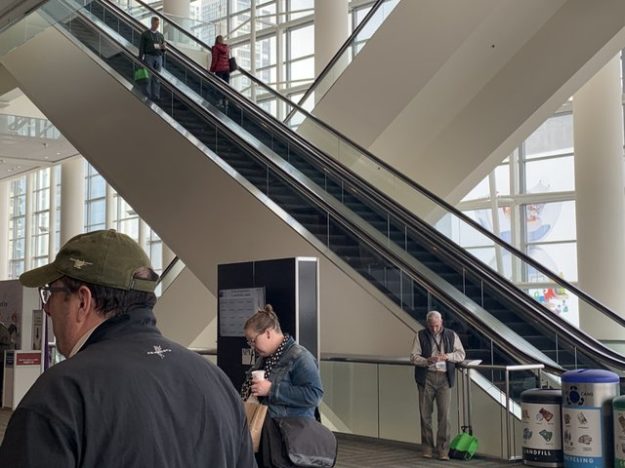 The escalators operate in pairs. No surprise. But these aren’t just any kind of pairs: they’re dual pairs. Normally, if the space allows for it (and at Moscone the space definitely allows), we just get the criss-cross, as seen in the photo above, where people ascending can green those descending face-to-face. But each of the two angles offers two escalators side by side. 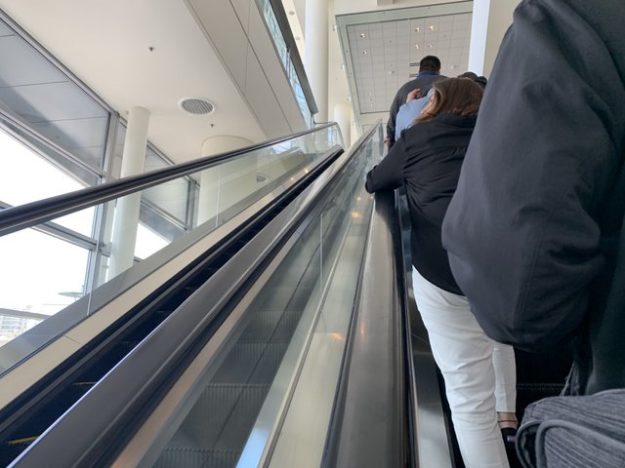 So why is everyone crammed onto the one escalator and not the either? I probably don’t need to explain: the two escalators run in opposite directions. And, at this point in the day’s conference, most people are ascending. 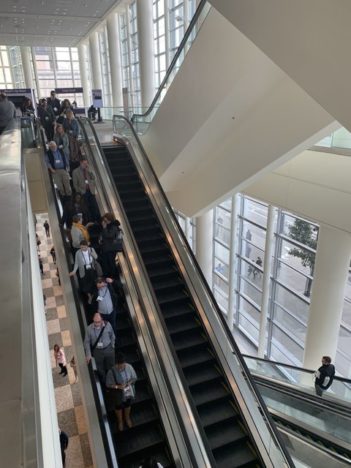 So the Moscone Center escalators offer an ascending and descending escalator on one side of the great foyer, and another pair on the other side. It’s a bit like complementary one-way streets in a congested downtown. During the middle of the day, when conventioneers are going every which direction, it’s safe to assume the both the ascending and descending escalators are equally full.

Congestion is, almost definitely, the basis for a lot of decisions about the interior configuration of convention centers. They always feature escalators in far greater abundance than elevators, even though escalators are often naggingly slow, and very few convention centers have more than a few floors. Why not just feature a bunch of elevators, scattered at various locations? Well, probably the same reason many intersections in intermittently busy areas (like suburbs or exurbs to major cities) are increasingly favoring roundabouts over stoplights: the former allow people/cars to enter an intersection in a general free flow, briefly yielding until they enter the traffic circle. Meanwhile, stoplights (and elevators) completely restrict flow for extended intervals, as people motionlessly wait their turn. Since many conventions can get extremely crowded with people during the peak activity—not unlike passing periods at the middle school—they need to keep bodies moving as much as possible, which is something escalators do better than elevators, even if they climb floors at a much slower pace.

But the Moscone Center has another whiz-bang solution up its sleeve with these dual escalators. Here’s the lobby near the end of a conference. 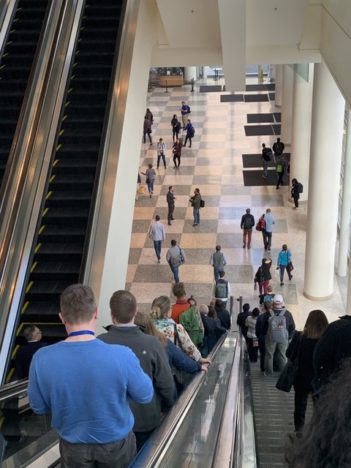 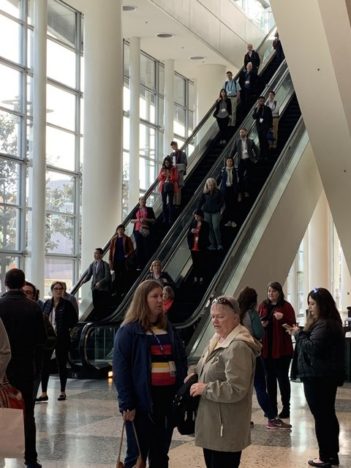 They’ve switched the directions of the pair, so now they’re both operating in tandem to help conventioneers get out more quickly. At this point, when it’s clear there will be little demand for escalators that ascend, they help ease the bottlenecking that might otherwise take place as people wait in line to alight.

It’s contraflow. Just like you might see on rare occasion on the highway. My first experience with contraflow was evacuating New Orleans during Hurricane Gustav over a decade ago. In order to ease the exodus from a major population center to a safer area to the northeast, out of the hurricane’s projected path, the State of Mississippi opened Interstate 59 as full contraflow, allowing all four (and sometimes six) lanes to move in a northerly direction by shutting off southbound exits through the highway’s entire length throughout the state. It was a marvel to behold, and it worked much better than the excruciatingly slow evacuation from Hurricane Ivan a few years earlier, when it took 9.5 hours to drive from New Orleans to Baton Rouge (a trip that usually takes less than 90 minutes). In neither case did the storm affect The Big Easy all that much; it didn’t even blow the mardi gras beads off the trees. (We all know which storm managed to do that.) At any rate, the Gustav evacuation was supremely successful because of the coordinated effort of Mississippi State Troopers in blocking southbound exits and enforcing the contraflow. Now, in 2019, we witness a similar phenomenon in our nation’s capital. 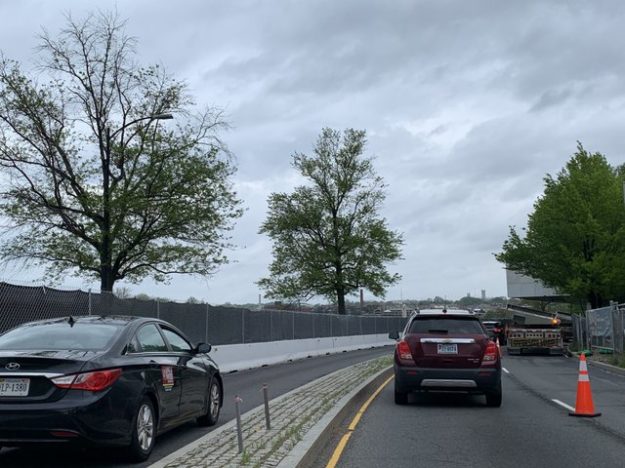 Weaving around the southern edge of the Rock Creek Parkway during afternoon rush hour, the District has instituted contraflow. Normally the bricked median separates vehicles going in the opposite direction, but the city’s police force institutes a contraflow for about four miles, every single evening from Monday to Friday for about two hours. Here it is with me driving on the “wrong” side of the road. 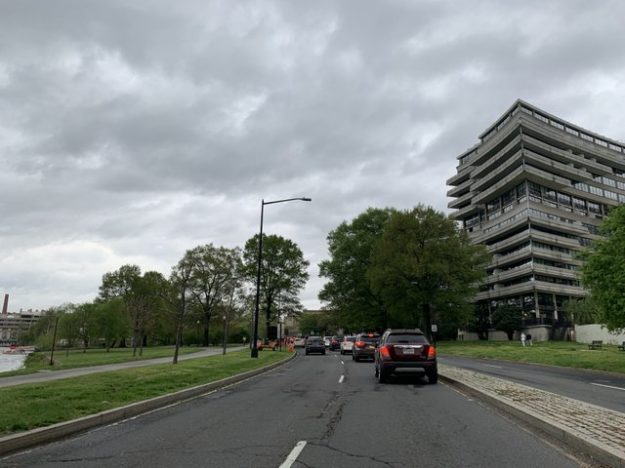 And yes, those are the famed Watergate Apartments to the right of the street.

As we explore the differences between pedestrian and traffic flow, is it a chicken-and-egg consideration? Obviously not really: the human foot predates the motorized wheel (though in some parts of the U.S., you’d hardly even be able to tell). And obviously roads need considerably more rules and enforcement of those rules; a person walking on the wrong side of a hallway during a busy passing period is unlikely to injure another, but if a vehicle behaves erratically or carelessly, the results can be lethal. This article may seem like it’s stating the obvious, but I’m not entirely sure it’s fair to assert that we simply modify our rules for the road based on what we’ve learned about managing pedestrians in congested situations. It’s not as easy to impose behavior on a human, even in the most inhospitable of environments. Much like escalators, cars are limited by their mechanics and their dependency on a human operator. But the Moscone Center clearly forced a situation at the end of a conference, essentially prohibiting people from ascending once they’ve taken an escalator down. If they want back up, they’d have to walk a lot further to climb a set of stairs or hunt around for an elevator.

The same moral atmosphere governed the conditions in Mississippi during Hurricane Gustav, where people seeking to go south on I-59 really didn’t have an option; they’d have to take the local roads. Regardless of whether the pedestrian chicken preceded the vehicular egg in terms of regulatory culture, it’s clear that it takes considerable effort and planning to cultivate an atypical situation like vehicular contraflow in either rural Mississippi or urban Washington DC. At the Moscone Center, to goad the peds into leaving the premises more quickly, all someone had to do was evacuate the escalator for 90 seconds and flip a switch.

7 thoughts on “Contraflow: when compared to people or cars, salmon still have it the toughest.”