The punchy glow of neon, accentuating what isn’t there.

An evening stroll along the busy main drag in the Washington DC neighborhood of Mount Pleasant reveals the luminescence of a vertically oriented neon sign advertising a business, with four simple letters: “ELLE”. While hardly the stuff of Vegas, it’s distinctive on its own terms, because it belongs to a style infrequently seen on today’s city streetscapes. 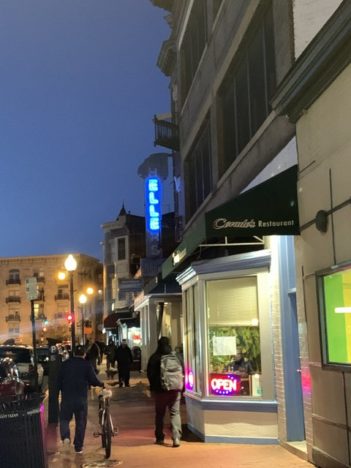 Discovered and isolated in the late nineteenth century. neon as an embellishment reached a peak in prevalence during the 1920s and 30s, when it became a widespread tool for urban signage. The noble gas, when isolated and contained in elongated glass tubs, emits a distinctive glow that, when combined with other gasses, can appear as a variety of colors. The precision of the glow when contained in tubes made it ideal to shape into lettering in business signs. Busy commercial centers like Times Square and The Strip in Las Vegas took it to a creative extreme, where the neon could accentuate lines in simple pictures, making reasonably detailed images fully visible at night.

Though neon’s popularity receded by the middle of the 20th century, partly replaced by the cheaper, brighter, more domesticatable fluorescent lighting, it has remained common as the core tool for nighttime signage. Even after a resurgence in the neon fad peaked quickly in the late 1980s, the gas remains a common tool in commercial signage. Thanks to its low cost for maintenance and longevity, many midcentury signs remain in operation. Like the one in Mount Pleasant. But there’s more to that radiant blue “ELLE” than meets the eye. Let’s take a look from a different angle. 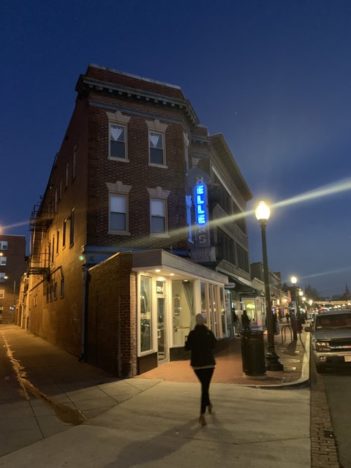 It seems that the neon in only a handful of the letters remains active. Poor maintenance? Not quite. 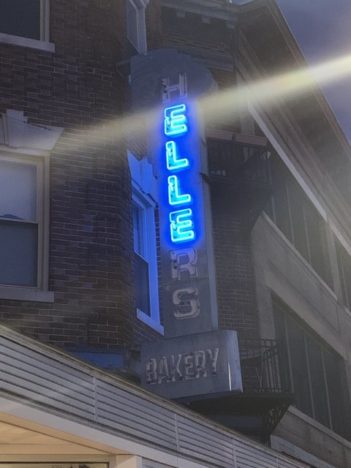 The “ELLE” is merely part of a longer name: “HELLER’S BAKERY”, from a sign that appears old enough that it might have dated to neon’s heyday during the Great Depression. And the deactivated letters appear to be deliberate. 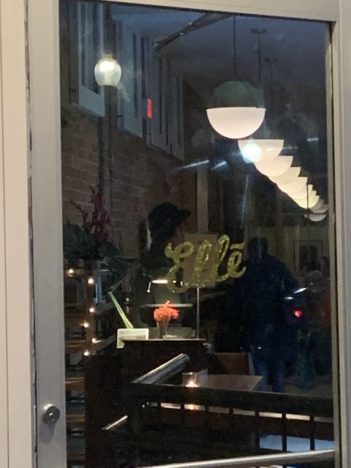 At the entrance door we have the actual new name: Ellē. And it’s not just a bakery. 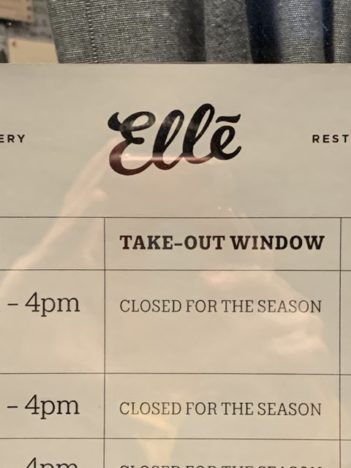 A fairly new addition to Mount Pleasant, Ellē is a coffeeshop by day, then (after a brief period of closure during the late afternoon) it becomes a full-service restaurant. Apparently Heller’s Bakery, to which the old blue sign referred, was a Mount Pleasant institution dating from the Depression that only closed in 2014. And the sign, which evoked nostalgia for many in the neighborhood, served as an opportunity to retain some of the legacy of the long-running establishment. But that diacritic above the E isn’t mere pretention. The local restaurateurs of Ellē salvaged the sign as a hat tip to an old family member named Ellie, reflective of the pronunciation for the restaurant’s name.

I have to hand it to them: they salvaged a neighborhood artifact and repurposed it as a branding tool, letting it shape the actual name of their establishment. And the removal of letters has certainly proven a smarter strategy than the letters added to morph the meaning of this promotional sign. But isn’t it a tool that could prove misleading during the daytime, when all thirteen letters to “HELLER’S BAKERY” are broadly visible to passers-by? No matter, I suppose; the restaurateurs decided the potency of the brand would supersede the possibility of confusion, and, after more than a year in operation, it appears they judged correctly. And Ellē isn’t the only establishment in Mount Pleasant to deploy clever play-on words for its name. 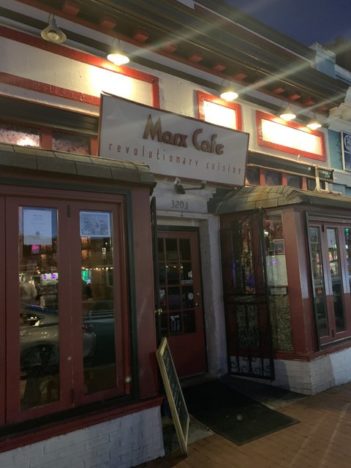 Just half a block on the same side of Mount Pleasant Street NW, another long-standing operation has capitalized on an unusual (albeit apocryphal) history. Supposedly, the man who founded this affable Mediterranean eatery was named Mark, and he put an order for a sign “Mark’s Café” many years ago. The company who manufactured the sign misinterpreted his order, giving him “Marx Café” by mistake, but Mark decided it was catchy and amusing, so he retained it as a pun, eventually adding a further reference to the writer of The Communist Manifesto through the restaurant’s subtitle. 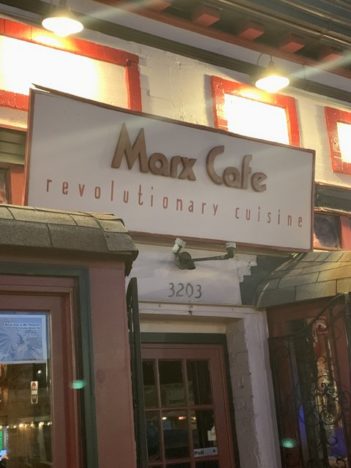 Whatever works. But don’t ever expect to see any neon at Marx Café. Far too materialistic, and definitely bourgeois.

PrevWindowless storefronts: sure, you can’t see in. But is it an oversight?
Pollo asado versus petrol: why don’t we see more gas station/restaurant conversions?Next

6 thoughts on “The punchy glow of neon, accentuating what isn’t there.”