H-Mart Building of Shepherdstown: an architectural and economic outlier in a perfectly preserved community.

The winsome town of Shepherdstown, West Virginia, though in most respects a free-standing municipality, has essentially morphed over the last thirty years into an exurban bedroom community to Washington DC, which lies approximately 70 miles to the southeast. No doubt bolstered by the presence of the well-regarded Shepherd University, the town has an urban, activist sensibility atypical to exurbs in general, let alone exurbs in West Virginia. It also boasts a picturesque, four-star hotel facing the Potomac River, with enough amenities to qualify as a mini-resort. Common to these sort of metropolitan exclaves, it also has an impeccable, picture-perfect main street. 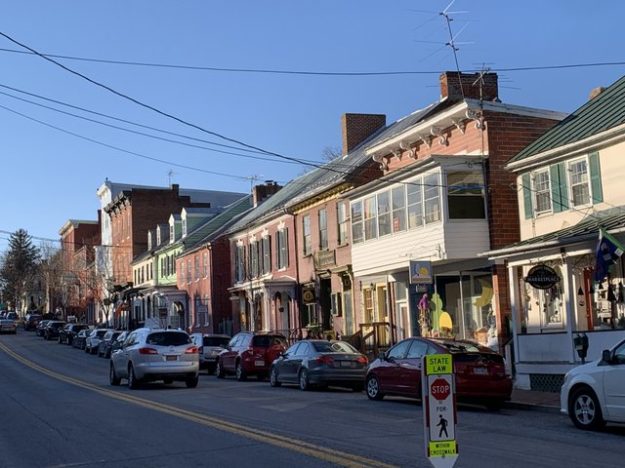 It looks pretty close to 100% occupied, and all of it is either locally owned or small, regional chains, which might as well be mom-and-pops, given the absence of a widely known brand. Many of the shops are eclectic boutiques purveying local curiosities. 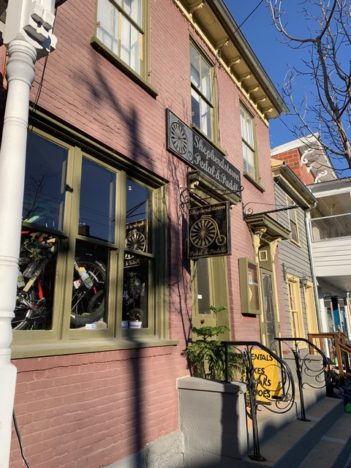 It’s a great main street, albeit a small one—but it does not need to be big to be great. At least 5,000 other small towns across the U.S. would kill to look like Shepherdstown.

Though the core of Shepherdstown’s German Street is a mere two blocks, it has a few other strategically placed commercial buildings on the margins. 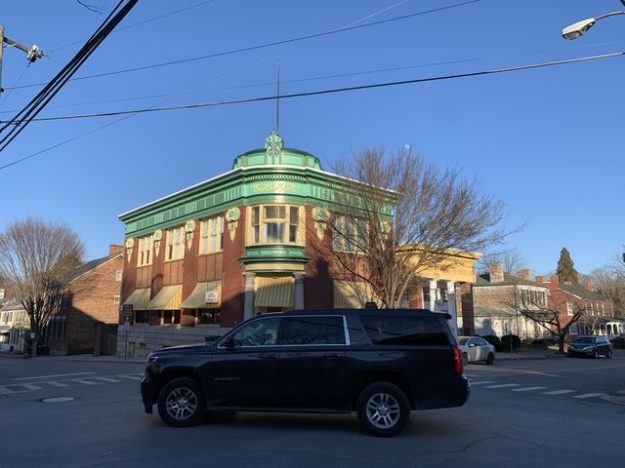 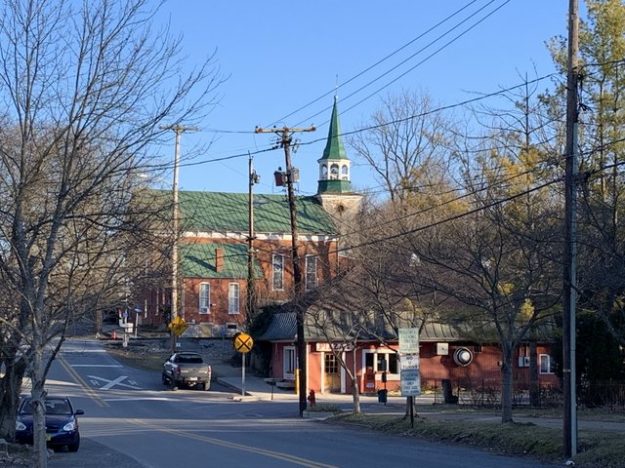 Great as this early 19th century architecture might be, it’s now time to stray from the preservationist archetypes, over to the stuff that interests me: its exact opposite. Like this building a few blocks away from Shepherdstown’s core. 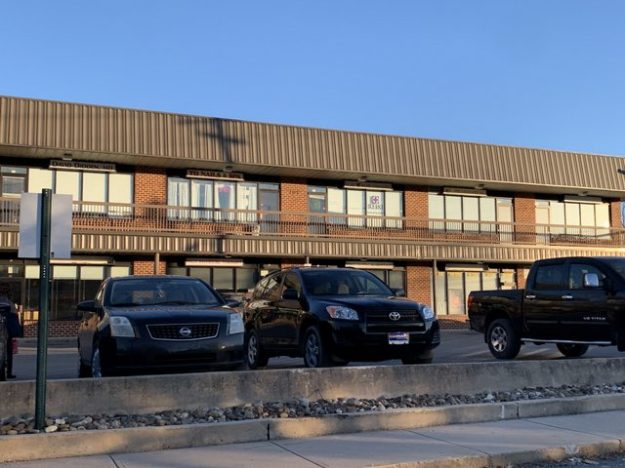 Beauty is always in the eye of the beholder, so I’m sure there are some out there who see charm to brown brick and corrugated tin, and by this point, just about any edifice from 1970 (give or take) is reaching an age that one could aptly label “vintage”. But even those who don’t consider the H-Mart Building (that’s what I’ll call it) an eyesore will have to acknowledge that it doesn’t fit in with the rest of Shepherdstown’s colonial vernacular. Just a block away, also on Princess Street, we get more customary buildings: 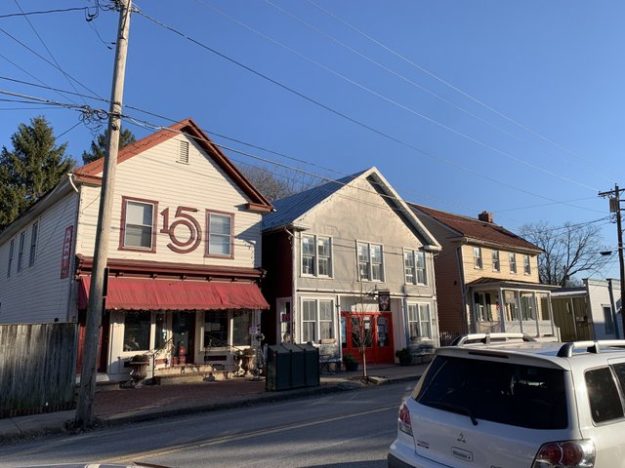 And then there’s H-Mart.

So how did this brown ogre invade the rural charm? Here’s my guess: like most communities, Shepherdstown faced some economic hardship by the middle of the 20th century, as its aging commercial buildings no longer aligned with a population hungry for automobile oriented conveniences. Some buildings fell into neglect and even dilapidation; before the historic preservation movement achieved any widespread influence, the most obsolete of these old buildings faced the wrecking ball. An enterprising developer from the late 1960s probably saw a better opportunity to retain this corner of Princess and Washington Street’s high commercial earning potential, but it needed a critical distinguishing feature: off-street parking. 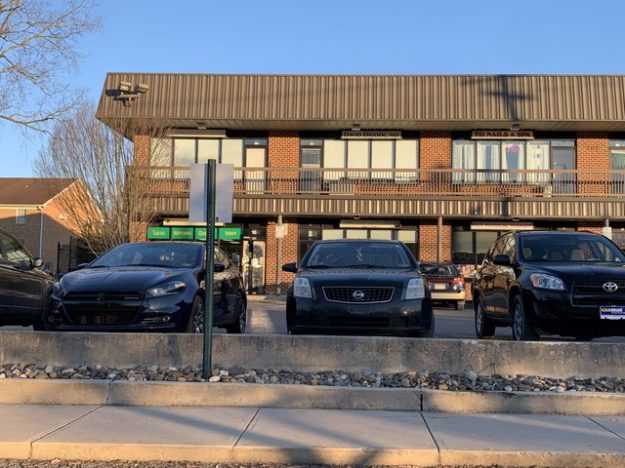 That parking needed to be abundant and widely visible. After all, this developer was giving us a bit more than a typical mid-century strip mall; it was going to have a second floor. Two tiers of commercial uses (a Floor-Area Ratio of 2.0) are unprecedented for a town of less than 2,000 people. Heck, a two-floor strip mall isn’t all that common even in high-performing suburbs of major metros. But apparently these developers thought they could pull it off. And thus, nearly fifty years later, the H-Mart Building remains the only auto-oriented shopping center in Shepherdstown’s .37 square mile municipal limits.

Does it stand the test of time? Well… 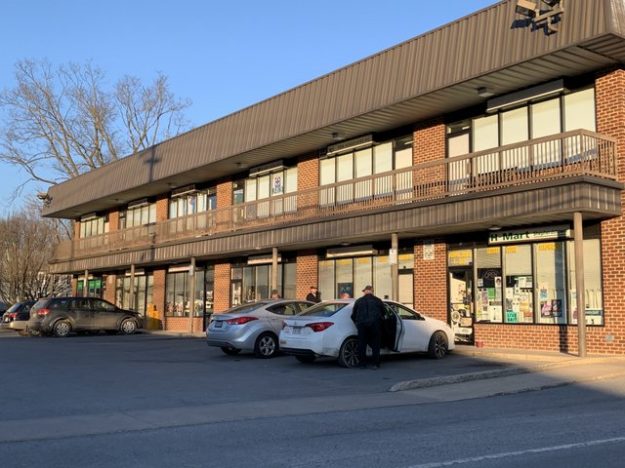 It’s clearly not empty. And on a quiet Saturday afternoon, the primary parking lot is almost half-full. It has another, larger parking lot behind the building, which I failed to capture by photo, but this Google Street View suggests that it serves a separate single row of shops (the upper level to this same structure). At this juncture, the H-Mart Building features its eponymous convenience store, a physical therapy clinic, a natural foods store, a reiki studio, a family practice physician, and a business management consultant. At least three of the storefronts are vacant.

It’s probably unfair to pass too extreme of judgment on the H-Mart Building’s overall financial viability based on the tenant mix. These conditions could change wildly from month to month, especially in today’s volatile retail climate. But two generalizations emerge: first, the H-Mart Building does not seem to attract much conventional storefront retail; instead, it gets service providers who don’t really need big, splashy window displays or a great pedestrian scene. Nothing against physical therapists or management consultants, but these are lower-caliber tenants when it comes to retail properties, which I’ve blogged about here before, as well as (more thoroughly) on Urban Indy. Quite simply, they don’t depend on eye-catching structures or abundant parking the same way, for example, a toy store or formal clothing store might. This tendency probably explains why so many of windows at the H-Mart Building seem to have their blinds pulled; not only do they not need people peering into their windows, they’re probably not open on the weekends. All those curtains, though, make the shopping center look less occupied then it actually is.

The second generalization more reflects the cultural shift away from consumption patterns that dominated from about 1950 to 2010. Even if the H-Mart Building isn’t in bad shape, it’s still much more vacant than the commercial buildings along German Street in the heart of Shepherdstown. It’s not as attractive of a piece of commercial real estate, and I’d say it’s almost guaranteed that it commands lower leasing rates than those lovely buildings that bring tourists to Shepherdstown on weekends when the weather’s nice. In other words, all that parking out front of the H-Mart Building is no longer a selling point. And while it may not yet be a detraction—a convenience store like H-Mart no doubt finds it very convenient—its anomalous architecture may eventually seem like more of a drawback than the ease of parking. In fact, that might already be the case: Shepherdstown doesn’t earn its reputation as a well-preserved town from the stuff that dates back to the Nixon Administration. After all, this is WV, not LV (Las Vegas).

PrevBriar Cliff Townhomes at Kutztown: a credible snapshot of life after students.
Sky Stage of Frederick: when a building becomes more profitable when they lop off the top.Next

9 thoughts on “H-Mart Building of Shepherdstown: an architectural and economic outlier in a perfectly preserved community.”