Brookings, the southwesternmost municipality in the state of Oregon, features a main street with a level of business activity that betrays its general charmlessness. 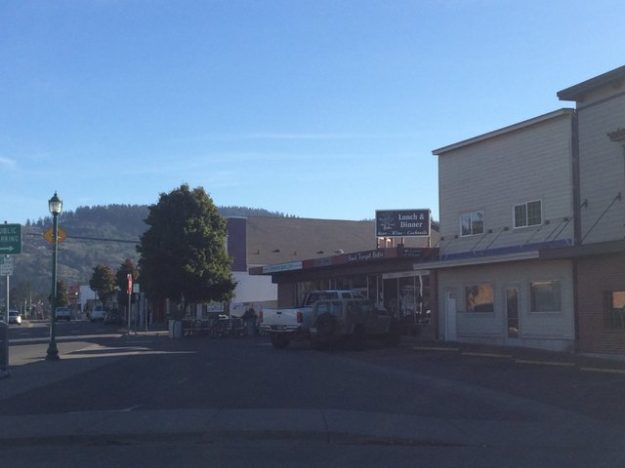 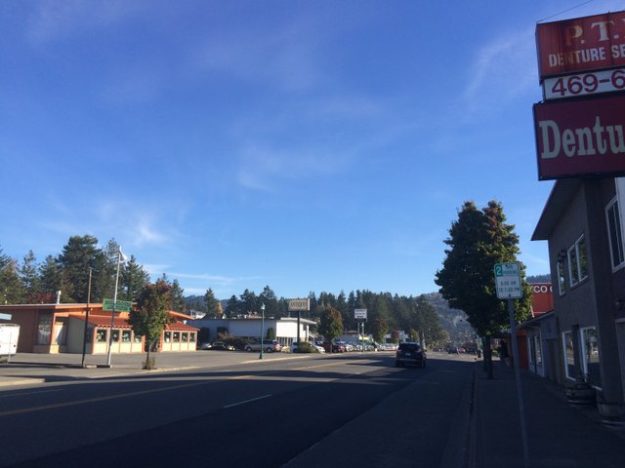 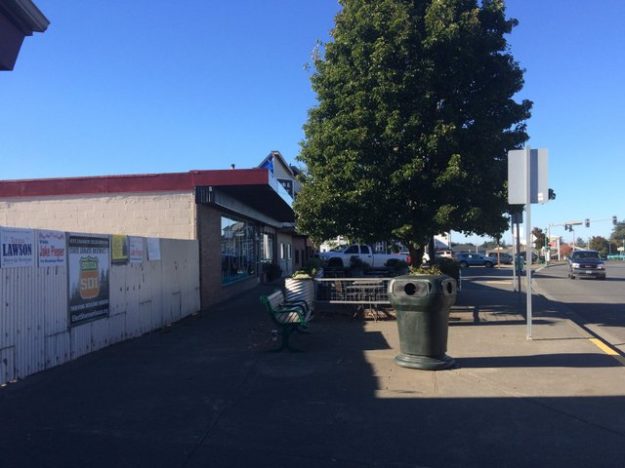 Plenty of similarly sized communities would kill to have a downtown with a low level of vacancy, a fully functional old-school cinema, and even a few white-tablecloth independently owned restaurants. And it’s all there despite the fact that Chetco Avenue clearly serves a primary function as U.S. 101, an arterial highway that bisects the town, with four lanes of high-speed traffic. And on one side of the street, the highway has relegated much of the old commercial uses to used car dealerships. 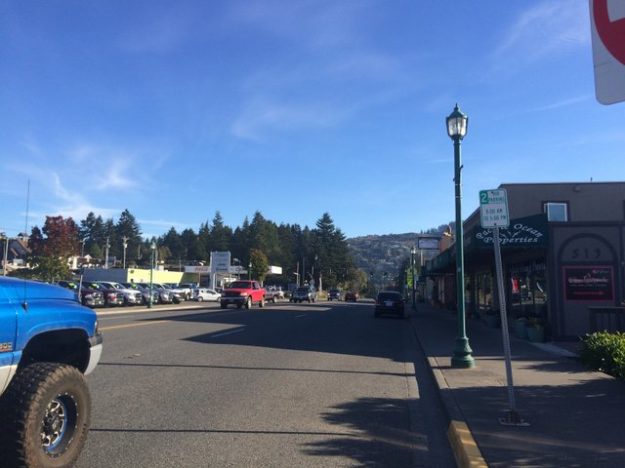 Despite these shortcomings, Brookings (population 6,500) boasts a fair amount of activity on its main street, even if only a handful of the buildings themselves are of any lingering historical interest. It may help that it offers breathtaking natural features within its municipal boundaries, such as Chetco Point just a half mile away. 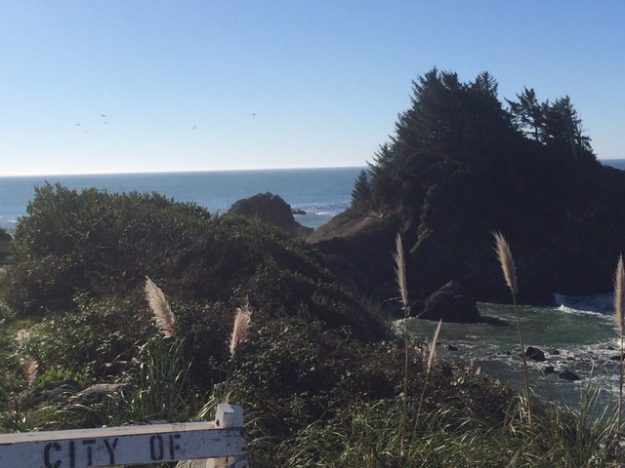 But what distinguished the main street for me was a building with little to no aesthetic appeal. 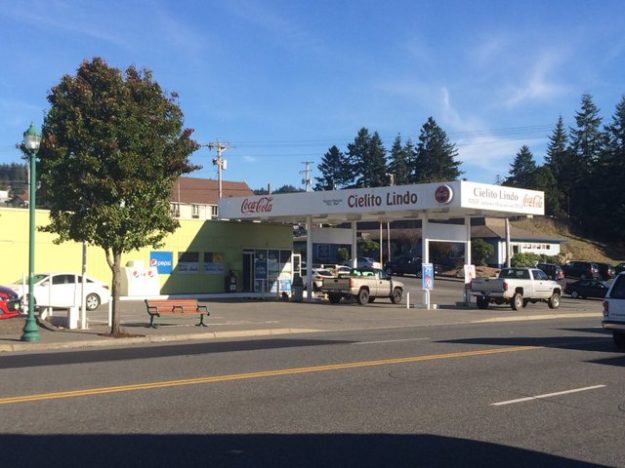 It looks like a gas station that just happens to have a Spanish name. But that’s the clincher: Cielito Lindo is a Mexican restaurant, with a small convenience store. Notice that, under the awnings, the actual fuel dispensers are absent. 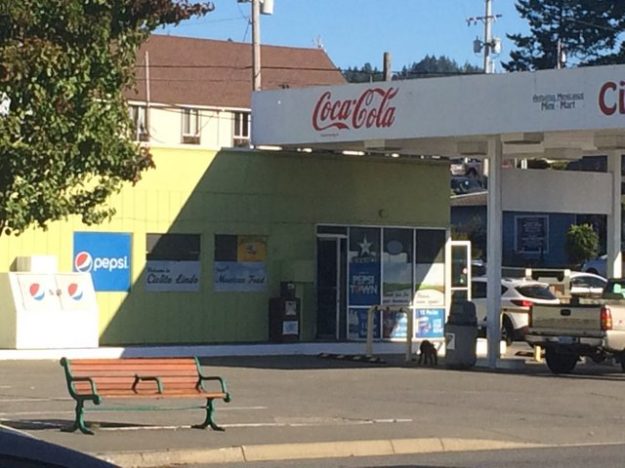 Brookings features a rarity: a repurposed old gas station. Sure, we see these from time to time in fashionable neighborhoods of bigger cities, where land values are high. But such a site in a more rural setting is rare. Far too often, if a gas station closes, one of two things happens: 1) it gets bought by another owner and becomes a new station; 2) it remains closed indefinitely, turning into visual blight. Due at least in part to the inelastic demand of gasoline (drivers gotta drive), gas stations routinely remain a reliable use even in comparatively economically underperforming areas. Small-time land developers love ‘em, and they conspicuously buy corner parcels at major intersections so they can sell them to a national brand like BP or Exxon. But they are persistently hard to repurpose, and I’d wager that Cielito Lindo was a long time coming—a space that sat neglected for quite some time, despite the general economic health of the rest of the Chetco Avenue corridor.

What’s the hold-up with gas stations? Well, first of all, they represent a massing oriented to a parking lot that doesn’t serve a great deal of other uses well. In short, gas stations and the attached convenience store routinely sit on comparatively small lots with few parking spaces—certainly only a few in comparison to the numerous vehicle trips. The trip generation for gas stations is comparatively high for their size—higher than most clothing retailers or restaurants—but the average gas station rarely offers more than a dozen parking spaces, not including the docks on either side of a fuel dispenser. Why so few spaces despite all of those customer visits? It’s not rocket science: quite simply, gas stations don’t operate on the expectation that people will linger; the average visit is usually less than fifteen minutes—often only five, frequently only two.

One of the biggest distinguishing factors of convenience oriented shopping, like gas stations, is the market to which it caters: one that purchases relatively few items (fewer than is necessary for a shopping cart) within a short period of time. As a result, it’s hard to imagine the owner of a sit-down restaurant finding much appeal to a vacant gas station, since it wouldn’t necessarily offer enough spaces for people likely to remain at least 45 minutes. In Cielito Lindo’s case, clearly customers can park at the docks where the fuel dispensers used to be. But these spaces are not clearly defined, and motorists are less likely to park as accurately or carefully, since they aren’t dependent on the dispenser. They aren’t terribly useful as parking. So why did the owner choose this site? Well, according to the website, it serves hot Mexican plates to go. I’m not sure it has table seating, but, regardless, that doesn’t seem to be the focal point. And that’s probably the clincher as to why this remained a reasonable location for a restaurant with a full kitchen.

The second challenge to the repurposing of gas stations is less of a logical and more of a capital impediment. Thanks to the handling of high volumes of refined petroleum, typically stored in underground tanks, most gas stations—particularly the older ones—induce a fair amount of environmental contamination. They’re mini-brownfields, making demolition a much more complicated task. Even if the vacating tenant removes those gas tanks (and they rarely do, since the real estate broker typically anticipates a replacement petroleum company), the odds are great that the subsurface soil is contaminated. All too often, the cost of environmental clean-up significantly exceeds the value of land by multiple degrees. This results in an economic stalemate: the land may remain desirable, on a primary commercial corridor, but few investors have the resources necessary to put the site back to practical use, so it languishes until another gas station tenant comes along. And while it ages in neglect, it becomes increasingly less desirable—and, if those underground storage tanks (USTs) remain, the odds that they will deteriorate and exacerbate soil contamination only grows. As a result, it should come as no surprise that, of the estimated 450,000 brownfield sites in the U.S., approximately half are affected by petroleum, and the biggest culprits are aging gas stations.

Needless to say, I don’t have any idea what processes the owners of Cielito Lindo undertook to repurpose this gas station in Brookings (if any). It’s possible that a previous landowner removed the USTs along with the dispensers, reducing the burden for future tenants. And there’s a slim chance they’re still sitting there, and Cielito Lindo is operating on a brownfield. This latter outcome is unlikely because it is probably unlawful—a restaurant with a functional kitchen should not operate on a site with contaminated soil. (It’s hard to gauge the level of investment; after all, the average passer-by would have to look twice to detect the repurposing, since the appearance overwhelmingly still resembles that of a gas station with a convenience store.) Regardless of how this little taqueria came into being, it begs a question of what will continue to happen to vacated service stations, especially if a growing appreciation for hybrid or full-electric vehicles induces a slowdown in the aggregate consumer demand for gasoline, resulting in widespread closures. At this point, the majority of old gas station sites have depended upon public dollars for rehabilitation. One can only hope in the years ahead, if shuttered gas stations become so omnipresent that the public begins to notice, a savvy entrepreneur would find a way to make remediation accessible and affordable. Until then, the shuttered Shells and Speedways will seldom serve salsa.

PrevThe punchy glow of neon, accentuating what isn’t there.
Briar Cliff Townhomes at Kutztown: a credible snapshot of life after students.Next