Briar Cliff Townhomes at Kutztown: a credible snapshot of life after students.

A lazy Sunday drive along a rural limited-access highway in east-central Pennsylvania yielded an unusual surprise: a sizable residential complex that looked completely abandoned. But we were going fast enough that we could only catch a glimpse. It was so atypical that we had to pull over to investigate further. 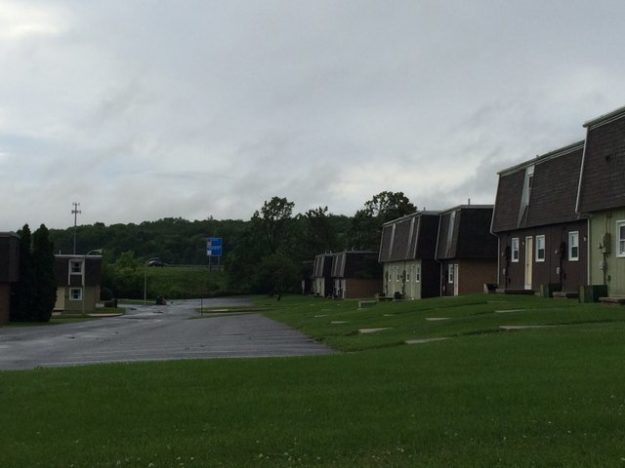 The background in the photo above features the highway’s directional signage, the road from which we had that fleeting view. It turned out it was more than just a cluster of vacant two-story townhomes. 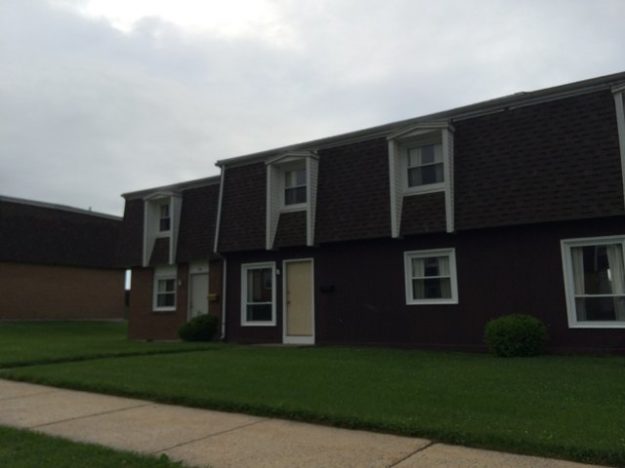 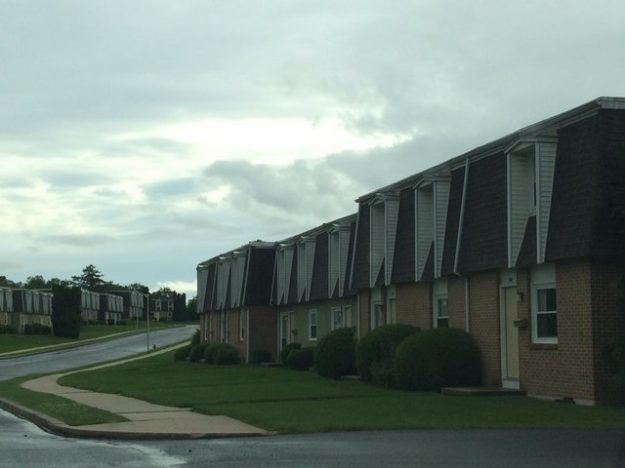 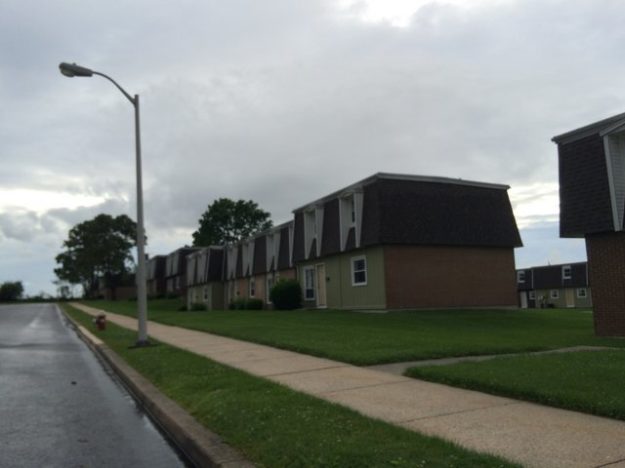 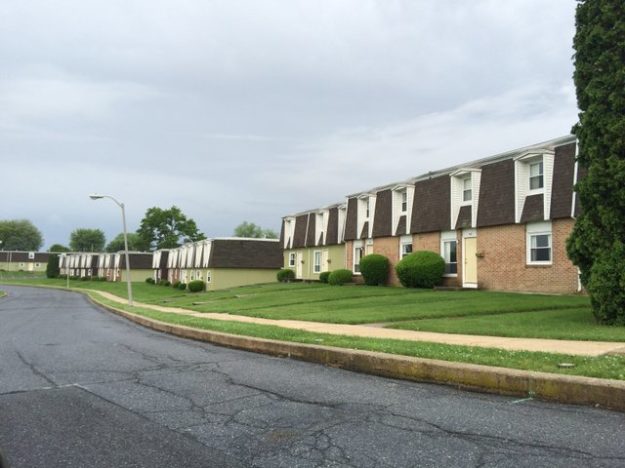 Blocks upon blocks of empty buildings, it really did resemble an episode of Life after People.

Despite the desolate appearance (we were unequivocally the only ones around), it only took a minute to conclude that this sizable apartment complex of at least a couple hundred units wasn’t completely abandoned. Though dated, the buildings were in far too good of condition, and the maintenance of the landscaping—however sparse it may have been—was solicitous. 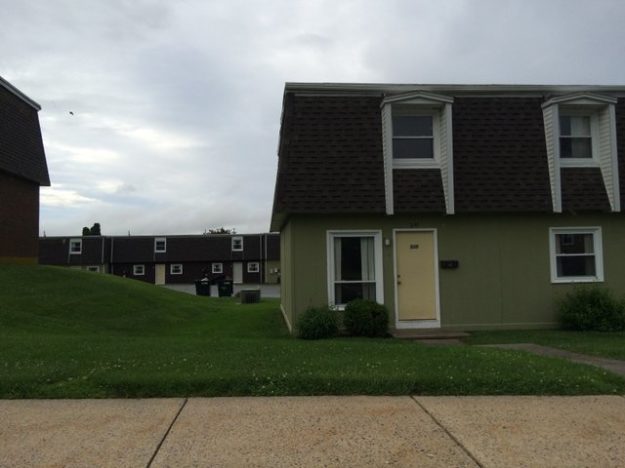 We had to remind ourselves the time of year: a stormy, turbulent day in early June. School had just let out.

Without even researching to confirm, I made a judgment: since we were just outside the Borough of Kutztown, we must have been driving through an apartment complex catering to students. 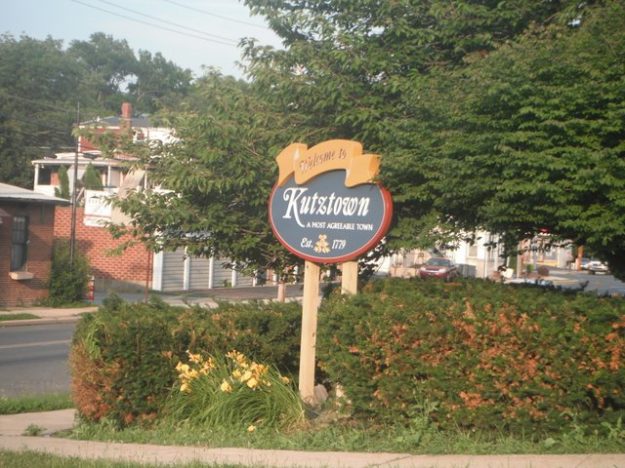 After all, Kutztown is home to Kutztown University, part of the Pennsylvania State System of Higher Education (PASSHE), a discrete system from the one that includes well-known Penn State University. This system serves as the organizing umbrella for fourteen schools scattered across the Commonwealth of Pennsylvania, mostly situated in large towns or small cities within a 50-mile drive of a larger metro area. And all fourteen PASSHE schools feature names that obscure their state-level support. East Stroudsburg. Shippensburg. Bloomsburg. Clarion. And yes, among the better-known (and confusingly titled) is Indiana University of Pennsylvania, the only one of the fourteen that falls into U.S News and World Report’s national instead of regional rankings. Most of the schools in PASSHE target native Pennsylvania residents.

Kutztown University’s strategic location is approximately 20 miles west of Allentown, the third-largest city in Pennsylvania. Kutztown isn’t a commuter school per se, and it does feature a variety of on-campus residential options. And a quick view of the heart of campus reveals a walkable configuration that suggests that the majority of the student body does not actually commute. But the Briar Cliff Townhomes, featured in all these photos, are a completely private venture, unaffiliated with the University, that just happen to take advantage of proximity: the edge of Kutztown’s campus is a mere quarter mile away—well within walking distance. And the complex is also within a two-minute drive to the exit ramp allowing entry to the limited-access U.S. 222, a thoroughfare that slices across this heavily Pennsylvania Dutch countryside while linking the larger cities of Allentown, Reading, and Lancaster. Thus, Briar Cliff Townhomes complex has a built-in market of students that, like the regularity of the earth’s revolution, it ingests and expunges through each academic calendar. And the students benefit from pedestrian access to campus and a medium-density, auto-oriented configuration that allows them to own cars easily (something they can rarely do when living in dorms), and then to zip away on the weekends and evenings. A perfect hybrid that accommodates the live-in and commuting student, though probably particularly targeted to upperclassmen who eschew Greek life. We caught the complex in the first week of June, right after graduation and before the summer session had begun. 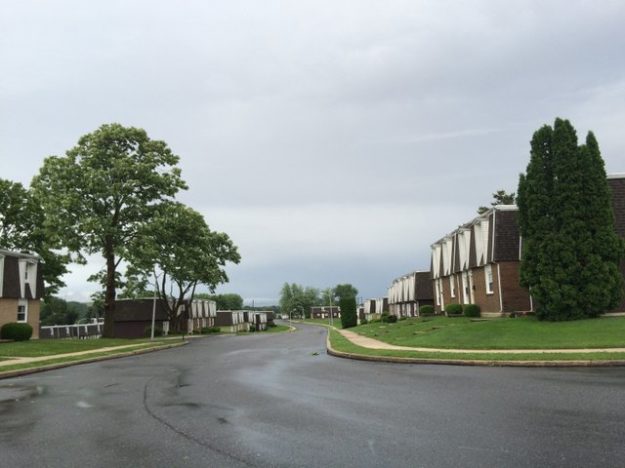 This photo series, dating from 2016, reveals how dependent this private development is on the student population. At that time, the visual evidence suggested that Briar Cliff had absolutely no leases that extended beyond the school year; it was almost as though it enforced a move-out date concomitant with graduation. More recent research, mostly from online ratings of the property management, suggests that the housing now accommodates some non-students, thereby limiting or completely eliminating the “life after people” appearance during our brief visit. We just caught the complex at a rare time.

There’s relatively little to ruminate on beyond these eerie photos. But it’s hard not to wonder if Briar Cliff, a market solution to the demand for student housing in an otherwise one-horse town (population 5,000) might stand as a metaphor for the struggles in how higher education entices and retains an ostensibly shrinking pool of young adults within the traditional age cohort to qualify as students. Despite intermittent newsmedia coverage, the general public remains broadly unaware of the crisis facing higher education in the United States: it has suffered a decade of declining enrollment (after a peak during the Great Recession), and once the “baby bust” years of children born during those lean economic times reach college age, the aggregate enrollment is likely to decline even further. Many prestigious liberal arts colleges are feeling the pinch; numerous less prestigious ones are already closing; and satellite campuses to the major state flagships are having a difficult time asserting a reason for being. This later category includes almost all the PASSHE schools, once intended to attract residents of rural areas and nearby cities, but far less likely to pique the curiosity of students allured by the promise of larger, more dynamic, better promoted schools, including Penn State University, whose national and international draw can help it transcend several high-profile scandals in recent years. 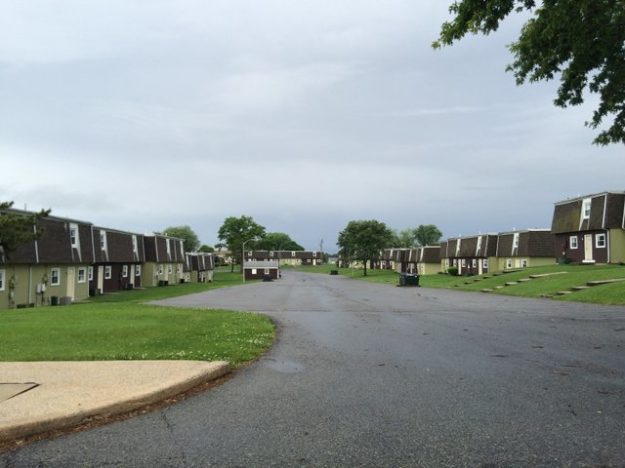 Briar Cliff Townhomes are there to serve the students at Kutztown University, and Kutztown University primarily serves the high school graduates of east-central Pennsylvania. But if enrollment continues to drop at schools like Kutztown (and fortunately the numbers suggest Kutztown University is faring better than most in the PASSHE system), it’s hard to know what other source might exist to justify these dated buildings. Or what might help keep Kutztown’s intact main street replete with active stores. 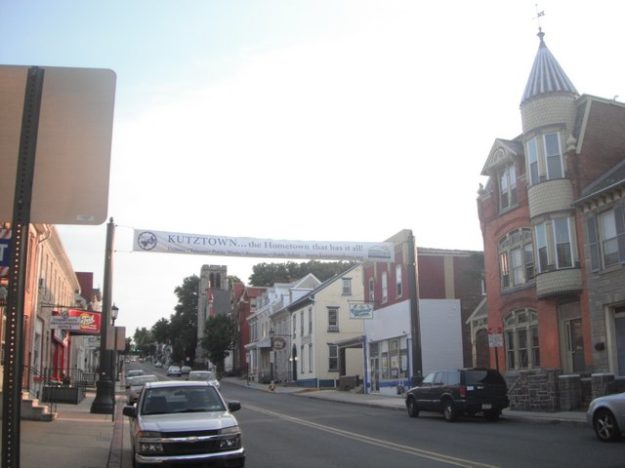 For much of the last decade or two, state university systems have pushed to transform their historically commuter schools (typically the satellite campus to the state flagship) the into more holistic live-learn communities. Full-time residential students not only graduate more often and in fewer years, they remain more invested in their alma mater as alumni, and they contribute more to the economic life of the surrounding community. Without the same dependency on vehicles, they also generate less traffic and require considerably less parking provision. But these solutions seem predicated on the halcyon days before the Great Recession, when demand for higher education showed no sign of abating.

Now, with birth rates down, tuition costs at persistent highs, and a strong economy that compels many to seek fortunate in the job market, the live-learn approach may simple not bring enough people in. Private-sector, hybrid solutions like Briar Cliff may feel the pinch even more acutely if schools like Kutztown must cast a wider net, which may result in a greater dependency (and more accommodations) for long-distance commuters to keep their numbers up. There’s just not the need to live so close to campus, and it’s increasingly likely that students will enroll part-time while working a primary job. The future is inauspicious: while PASSHE has not announced any closures or consolidations, it is looking at other states that have pursued these solutions. With the baby bust reaching a peak in 2009 (and only moderate recovery in ensuing years), the dearth of college-age students is only going to escalate. The most cynical predictions anticipate that half of all institutes of higher learning will close. To fend off its their demise, satellite campuses like Kutztown University may become primarily de facto commuter schools, or even incubators of long-distance (online) learning technology. Without an intrinsic demand to live in places like Kutztown, the unsettling appearance of Briar Cliff Townhomes in that week after graduation may become a more routine visual in the years ahead.

PrevPollo asado versus petrol: why don’t we see more gas station/restaurant conversions?
H-Mart Building of Shepherdstown: an architectural and economic outlier in a perfectly preserved community.Next

6 thoughts on “Briar Cliff Townhomes at Kutztown: a credible snapshot of life after students.”