Windowless storefronts: sure, you can’t see in. But is it an oversight?

Silver Spring, Maryland hugs one of the corners of the District of Columbia. Thanks to this proximity, it’s booming as a bedroom community, much like the better-known, ritzier Bethesda just five miles away. It’s an edge city, a satellite suburb with an unusually high concentration of jobs, which owes its current employment density to its proximity to the historic urban core of Washington DC. The transformation of its downtown is fully underway, and though I lack the advantage of having seen this community twenty years ago, it’s clear from the cranes that new edifices are springing up like mushrooms. 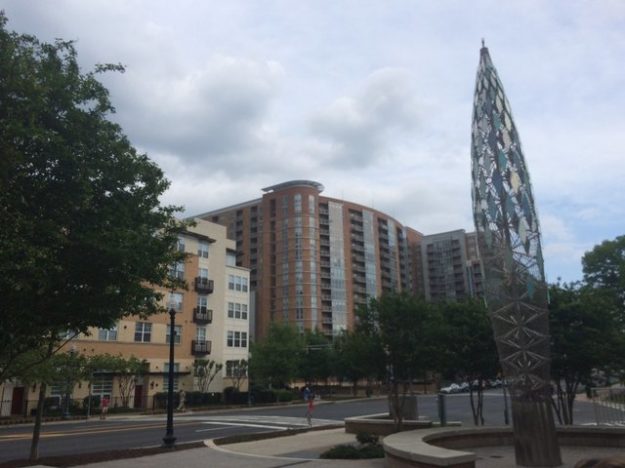 Don’t let the leaves on the trees from that photo deceive you; the rest of this album is set in the dead of winter. Nonetheless, Silver Spring has a thriving street scene, with a flourishing new city library, an urban mall (Ellsworth Place) that genuinely seems to have revitalized, a pedestrian only block, and a civic center used as an ice rink during the cold weather. 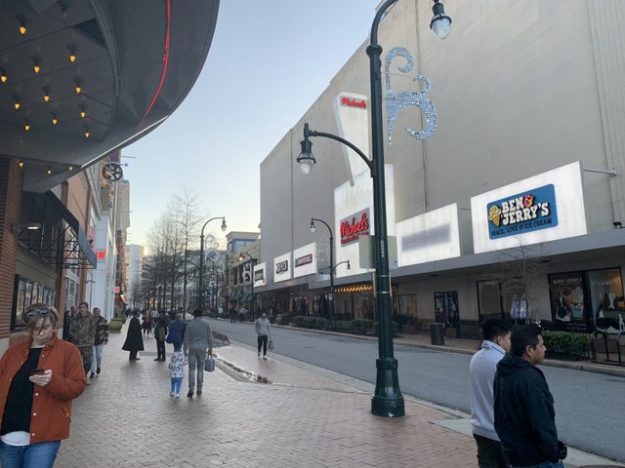 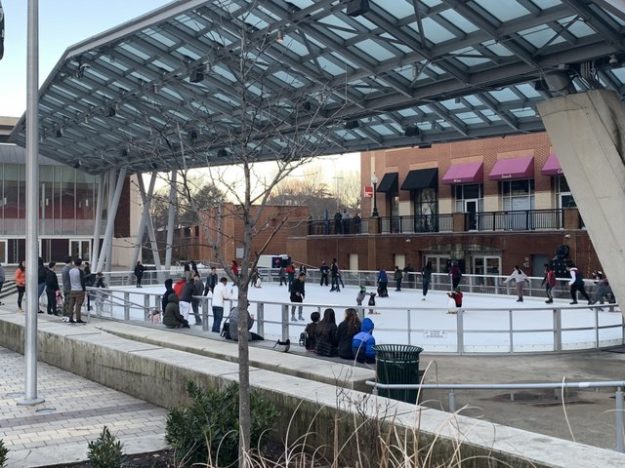 It’s a lively, diverse place, all the more remarkable because, like Bethesda, it isn’t even a municipality—just an unincorporated part of Montgomery County, which wraps around the northwestern half of the District of Columbia.

Amidst the steady assortment of recent midrise and high-rise redevelopment in downtown Silver Spring (with more forthcoming), one particular obscure storefront window caught my eye, fronting a generous plaza that combines turf and hardscape. 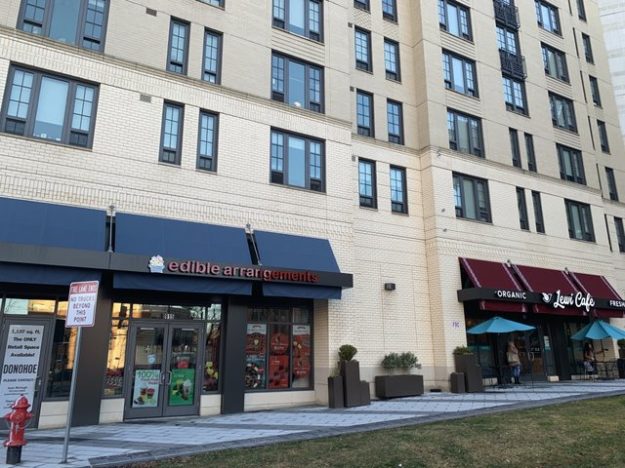 No, not the Edible Arrangements. That corporate-accessory retailer has continued to thrive against all odds, when one considers the cost of the product in relation to the quantity of food it provides. It’s that small door to the left of Edible Arrangements, with the white laminate in the frame. 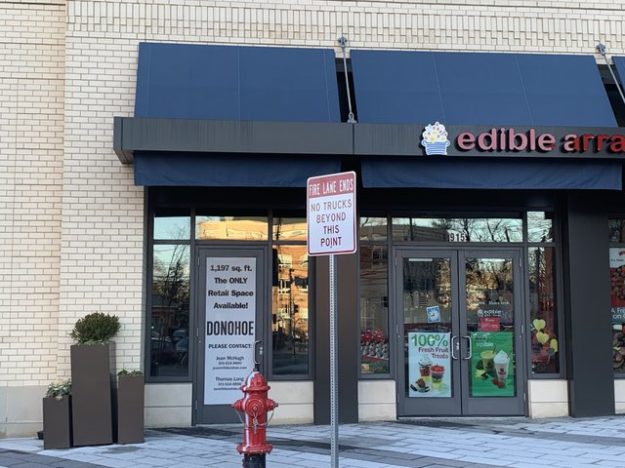 It’s just an entry, with two narrow windows on the side. And nothing else. Windowless. No additional apertures, which becomes obvious as one pivots to the left. 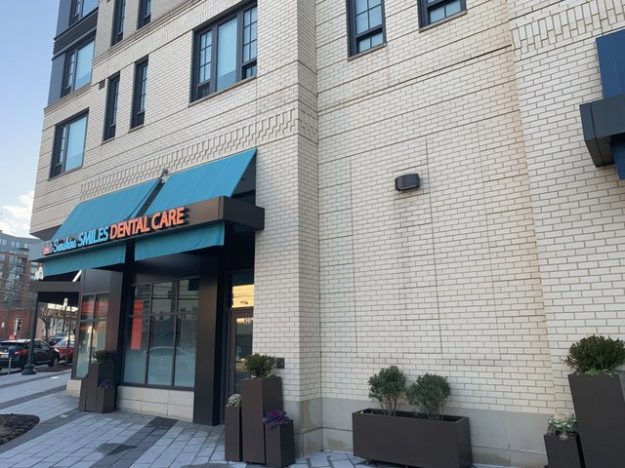 Yet, somehow, the broker markets the property as retail, despite the fact that it appears to be otherwise windowless. Is that really the case? Let’s peer inside. 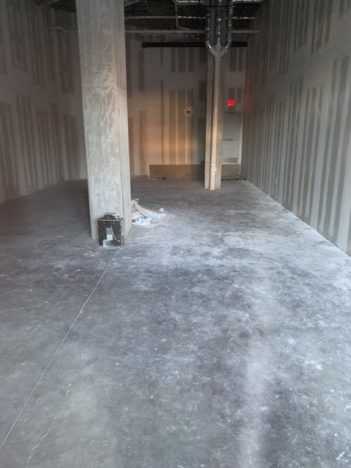 That’s right: long, deep, and cavernous, with no other means of marketing the product through displays. Nonetheless, the marketing emphasizes retail.

No wonder it hasn’t found a tenant. This is despite the fact that Silver Spring is growing and densifying, and even in this challenging retail climate, occupancy rates through most of downtown seem to be rising. What clothing store or hobby shop is going to choose a space where it’s basically impossible for passers-by to see anything inside, especially when other, better options abound nearby?

I’m not sure this almost windowless store was as dumb of a design decision as it might initially seem. After all, despite some districts that still appear quite lively (downtown Silver Spring among them), retail continues its steady retreat from bricks and mortar. We are quickly reaching a point where clothing shops in particular are difficult to find (both locally run and the national chains), and our downtowns largely involve restaurants, bars, grocers, and various services—all things that the internet hasn’t fully taken over (yet). While this certainly adds a great deal of magnetism to urban districts, it too may be vulnerable in the years ahead, with the escalating popularity of such delivery services as Grubhub and Doordash. Who needs tables and chairs at a restaurant when a mere kitchen will suffice to get the job done?

Several years ago, I bemoaned the fact that office-related uses were claiming an increasing amount of space on the first floors of our commercial districts—space that is most suitable for retail displays. In that blog article, I complained desperate property managers often lease those broad window sites to architecture firms, insurance, accounting, finance, and other white-collar services, who then shroud them with curtains. They don’t need the first floor; it’s not like passers-by make an impulse purchase of life insurance. They don’t need the sunlight either; it might actually create too much of a glare on those computer screens. They can thrive windowless.  Necessary though they may be, these white-collar services don’t really contribute to street life in the same way as restaurants and retail; they can thrive just as easily on upper levels, outside of conventional lines of sight.

That was then. At this point, I recognize that property managers are so desperate for tenants that they have to take anything they can to fill those first floors. 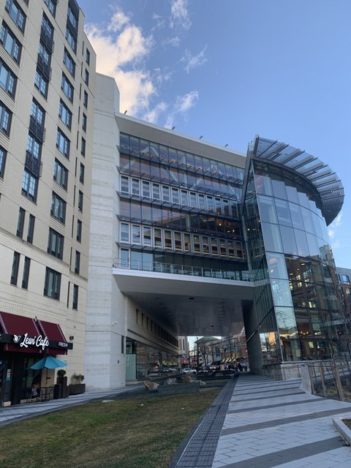 Yet here in Silver Spring, fronting a plaza that overlooks the stylish new Silver Spring Branch Library (visible in the glass in the above photo), we witness a small 1200-square-foot storefront space that almost gets buried next to the Edible Arrangements. And it is basically windowless. Frankly, it’s perfect for a service-oriented office use and will probably eventually find a tenant, not unlike the dental office on the other side, whose windows, I might add, are frosted. Thus, perhaps unintentionally (but probably not) the developer designed this nook exclusively to cater to small, service-oriented businesses who like the high profile, don’t need lots of natural light, and can’t afford a bigger space. It helps to monetize what otherwise could be dead space for the developer, and it diversifies the type of tenants the building could attract.

As was the case in another storefront I wrote about in Silver Spring, we witness an anything-goes approach to filling in the leasable gaps in a city that is broadly transforming from a nondescript satellite downtown to a major player in its own right. And it’s doing it all without having a mayor, a town council, or incorporated boundaries. The market knows a good location when it sees it.

PrevMid-century modern in main street Yankton: where everything new is old again.
The punchy glow of neon, accentuating what isn’t there.Next

7 thoughts on “Windowless storefronts: sure, you can’t see in. But is it an oversight?”