Mid-century modern in main street Yankton: where everything new is old again.

Multiple times in the past I’ve compared building design to clothing styles, and while such an analogy may gall both architects and fashion designers, I’m going to hold my ground on this one. The two professions clearly fall within the discipline of design, and, as such, they rely heavily on the transitory nature of prevailing cultural tastes toward a certain aesthetic.

Looking at a single block in the small city of Yankton, South Dakota (population 15,000), even the unschooled can see three radically different architectural forms represented. 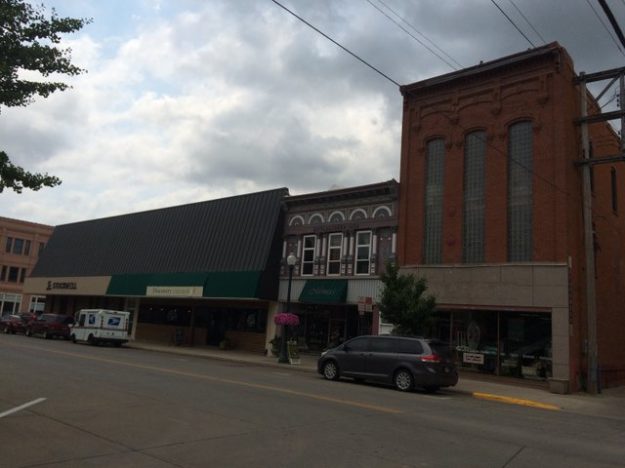 We have one time period on the left, another in the middle, and a third on the right. Which one is modern? Why, the one in the middle—of course. 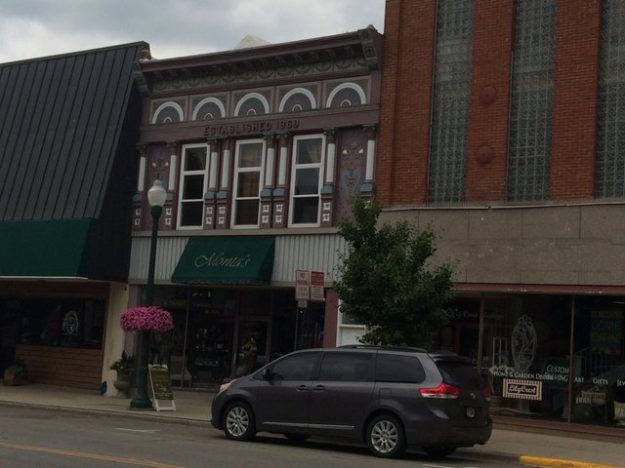 That’s right; the building that looks the oldest is the most reflective of contemporary tastes. Erected (we can assume) in 1869, the edifice reveals a remarkable restoration of a façade, with fresh colorations to all the various ornamental features at the cornice. Maybe it has always enjoyed this level of preservationist solicitude; regardless, the fresh paint and attention to detail (particularly on that second floor) suggest a recent, sizable investment.   Meanwhile, the building on the right retains some similar details on the cornice, but the owner appears to have subjected it to a repurposing to something more industrial, or perhaps something more confidential, thereby justifying the massive, two-story panes of opaque glass bricks—a feature that I can confidently assert had no real salience in the mid nineteenth century. Then there’s that broad building on the left. It may date from the same time as the other two, but one would hardly know it: reclad in what essentially looks like corrugated fiberglass, the owner no doubt sought to modernize the building, most likely in the middle of the twentieth century, a period when even small, comparatively isolated cities’ downtowns were facing serious competition from auto-oriented strip malls on the outskirts.

At the same time that the automobile became a sine qua non for the average American family in the late 1940s, the historic downtowns suffered from a lack of parking nearby, and their configuration didn’t lend well to logistics necessary for wholesale loading and unloading. Additionally, the combination of multiple uses under one roof—with retail typically on the first floor and offices or apartments immediately above—proved less desirable when compact settlement patterns were no longer as expedient. And as retail activity migrated out to cheap land, to make room for parking lots and squat strip malls, the owners of those declining downtown buildings struggled to find ways to retain viability.

It’s hard to imagine a point in time when our Victorian, Italianate and Romanesque commercial buildings were as passé and unsightly as an Ed Hardy shirt is in 2019, but it really did get that bad. Though it took longer to impact small towns or remote cities, by the 1980s even downtowns in places like Yankton were suffering, having lost considerable ground to the automobile-oriented shopping that lined US Route 81 (Broadway Avenue) stretching northwards from the historic center. Buildings like the ones featured in the photo above fell into neglect and disrepair, sometimes to the point that the city had to condemn and ultimately demolish them. 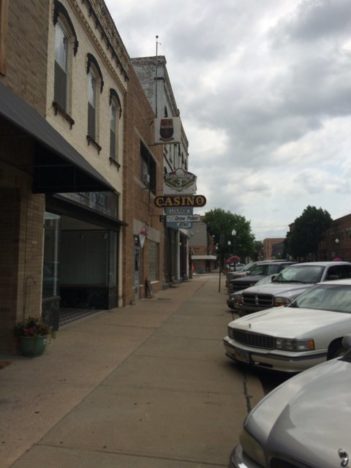 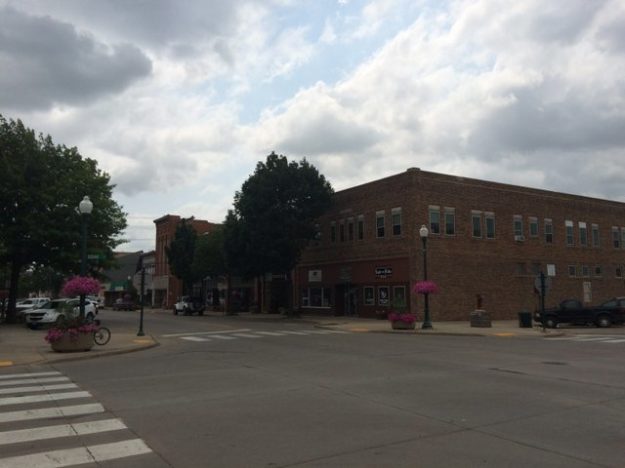 Downtown Yankton has held together better than many other places, perhaps because, in sparsely populated South Dakota, it’s a regional center in its own right (the Census calls it a micropolitan area), but the evidence is still abundant that the owners of commercial buildings downtown reacted desperately to changing times. I suspect there’s a handsome old façade behind that corrugated green sheath, but, at some point in time, the owners installed it to make their building appear newer and more contemporary. (It also helped to hide the fact that, in all likelihood, the now windowless second floor of the building has served for years as nothing more than storage, if not abandoned altogether.)

I have featured other examples on this blog where property owners have re-clad the historic façades in an attempt to rebrand old commercial buildings, with variegated results. In the similarly sized Thibodaux, Louisiana, the owner sought to endow the façade with an appearance that, at the time (presumably around 1960), no doubt seemed almost futuristic; the mid-century, space-age gestures seem quaint a half-century later, but they shrouded what clearly seemed like an outmoded building. The much smaller town of Altamont, Illinois chose to garnish an old brick façade with a rustic, pioneer motif, apparently to evoke a sort of early-days nostalgia. The left-hand building in Yankton does not evince a great deal of stylistic thought: neither referencing the past nor the future, it merely serves to shroud a presumably underutilized (and maybe even dilapidated) second-floor façade.

In a single camera frame, Yankton effectively captures three aesthetic judgments toward downtown. We witness a chronological advancement of different taste cultures, with—as is nearly always the case—an eventual return to the earliest period, manifested by that middle building. While I don’t think we’re likely to encounter any major surgery performed on the building on the right (with the glass blocks), I suspect I’m not alone in hoping that the broad building to the left undergoes extensive renovations, ideally with that unsightly green sheath removed. In the nearly three years since I took these photos, the tenants appear to have embarked on some improvements: the storefront church that occupies part of the first floor (a common tenant in downtowns that have not yet gone upscale) appears to have renovated its ground-level façade to a more welcoming contemporary unfinished wood aesthetic, while featuring a coffeehouse as part of its outreach. Good. One can only hope that, in the near future, the owner of this property sees the value in that long-neglected upper floor and devotes considerable effort to improving its capitalization and restoring that original façade. For all we know, it could be just as decorative as Monta’s, the painted lady to its right.

Stepping back from this analysis, one might conclude that all of those faux-façades from the middle of the 20th century—the era that predated the downtown renaissance—need to get torn down. Such a decision, in my opinion, would be rash. Take this streetscape elsewhere in downtown Yankton. 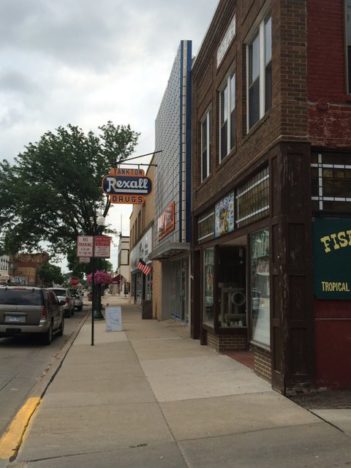 I know next to nothing about Rexall Drugs, but apparently it was a common national network of primarily individually franchised stores until the late 1970s, at which point private investors bought the chain, divested the company-owned stores, but allowed independent owners to retain the name, look, and brand. The Rexall brand today (“Rx for All”) primarily refers to health related products still under the manufacture of the much smaller company; any locations using the orange-and-blue cursive logo are franchised that have survived over the years, most commonly seen in rural locations. This Rexall in Yankton is revelatory not just because its iconic, vintage sign. 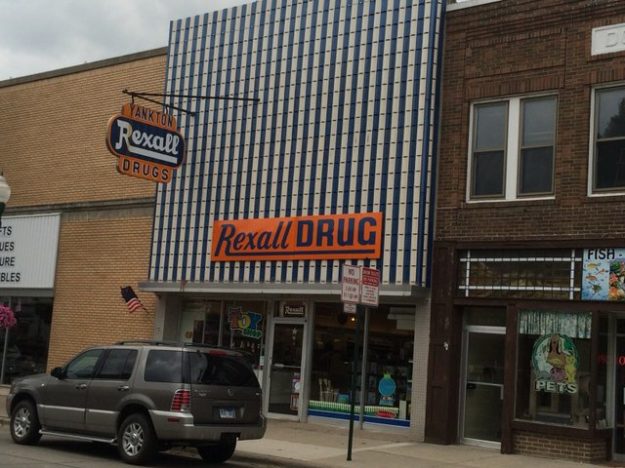 Another midcentury façade, which probably is the same age as that rusty hanging sign. It’s no great artistic achievement, but at least it helps reinforce the Rexall logo. I’d wager that it’s more effective because of this symbiosis, and thus I’d rally less for the owner to remove it. But it still blocks the windows on that second floor, thereby reducing the structure’s market capitalization rate. If the Rexall ever closes, and if Yankton’s downtown ever escalates from one of reasonable success (its current condition) to one of high value, the owner’s best interest would absolutely be to remove that fake façade and restore the building to its historic state.

While the revitalization of downtowns has shifted the cultural gaze back to the historic appearance of our old commercial buildings, we have to remind ourselves what impelled us to slap ungainly sheathes on them sixty years ago. Some of the sheathes achieve as good of aesthetic results as the original façade, or, at the very least, are interesting and evocative on their own terms. Jane Jacobs, in her seminal work The Death and Life of Great American Cities, recalled two of her fundamentals to vibrant urban neighborhoods: a mixture of land uses and a variety of time periods (and, therefore, of architectural styles) reflected in the buildings. Most commercial real estate undergoes some modifications concomitant with renovations or rehabilitations; the juxtaposition of a Rexall and a preserved Italianate commercial building—two unlikely neighbors—may confer more value in aggregate than one where preservationists advocate for a systematic dismantling of those space-age, mid-century façades. The revitalization advocates should assess each building on an individual basis, which exactly what talented developers, brokers, and preservationists are already doing.

PrevAberdeen XChange: a growth machine that choked before the engine’s finished revving.
Windowless storefronts: sure, you can’t see in. But is it an oversight?Next

7 thoughts on “Mid-century modern in main street Yankton: where everything new is old again.”