Microretail in Midtown Manhattan (Part Two): can it salvage the city’s shuttered storefronts?

In this era of progressive retail collapse, it’s becoming increasingly difficult to conceive of any viable long-term solution for the numerous, variegated, embattled storefronts across this nation of largely unregulated markets. It’s already bad throughout the suburbs, where strip malls, big boxes, and even formerly mighty regional malls are under such strain from their burgeoning vacancies that even the normies have started noticing. (And developers have abandoned their previously proposed new super-regional retail developments.) Almost everyone over 30 years old can reflect upon a mall from his or her childhood that is now dead or dying. And the strain from all that excess commercial space has begun to encroach on our revitalizing urban districts as well—even in Manhattan, the most densely populated urban area in the country.

I’ve pontificated upon the possibility of a solution in microretail, loosely defined as leasable storefront spaces that are smaller than 300 square feet. They aren’t common at all in the country—probably almost as much a novelty as the tiny house movement—but they may prove the salvation for struggling commercial corridors in an era when bricks-and-mortar retail cannot seem to survive. Many cities lack any real commercial spaces that fall within this diminutive threshold.

New York City, with its pricey real estate, is not one of those places. And this blog article functions as a follow-up to a case study from a few years ago, again in the wealthy, densely mixed-use streets of Manhattan’s Upper West Side, which not surprisingly features microretail offerings ranging from multiple tiny shoe repair shops, a novelty French jeweler, and even a place that exclusively sells* mustard. I visited two winters ago (January 2017) and found all of the above during my meanderings. At that point, microretail seemed like a credible compromise to allow less capital-heavy small businesses a chance to showcase their merchandise/services on prime, high-traffic commercial areas, specifically because they pay less rent and can thus incur at least a slightly higher array of risks. This sub-class of businesses, which often struggle to penetrate the market even under the most favorable of conditions, may find that highly focused, deliberately condensed storefronts give them the extra boost they need—despite their limited maneuverability and storage space. (Bear in mind: the fundamentals of economies of scale would suggest that microretail costs more to the tenant on a per-square-foot basis, though the expenses are lower because the aggregate rent is less.) Lastly, microretail encourages a hypersensitive demographic targeting, which we all know is essential in this era algorithmically-derived online recommendations, based upon user information collected from internet clicking history.

Manhattan already provides an optimal environment for incubating these small shops, not only because of the spatial density but the sky-high land values (a typical corollary to high density), which, in some cases, has generated free-market development of microretail spaces without any public-sector incentives. Those shoe repair shops must locate somewhere, and since they need very little space, why not take a vacated former alley? For the Upper West Side, it works. Microretail bears fruit.

A counterpart to my Part One post exists just a few blocks away, also in the Upper West Side (near Columbus Circle), where a series of mid-block storefronts offer a reasonable approximation of microretail. 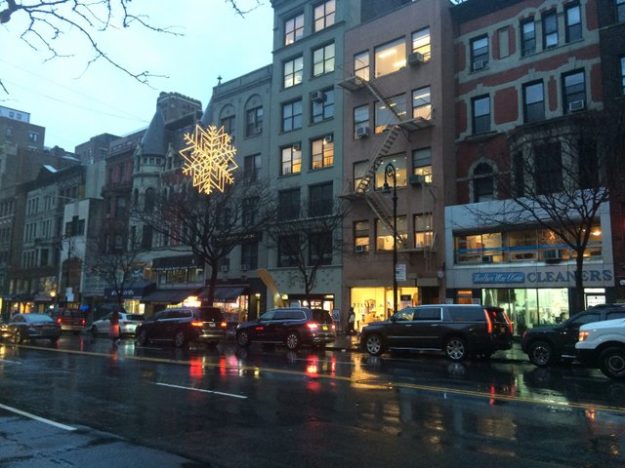 Without measuring the storefronts in the photo above, I can confidently assert that most are a bit larger than 300 square feet. After all, the typical Manhattan building claims limited street frontage but considerable depth. But looks can still be deceptive. Take this building, for example, on the same block as the photo above: 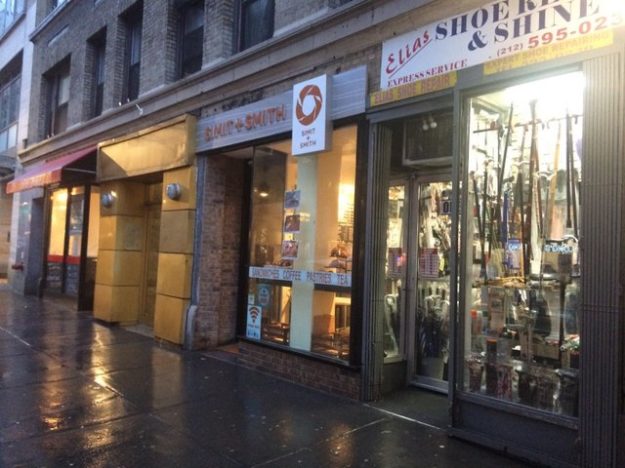 It’s clear from the façade that, by Midtown Manhattan standards, it’s a wide building of at least 150 feet, probably more. But it’s got three small storefronts crammed against the sidewalk—two on the right side of the entry door and one on the left. And this is what we encounter, in the densest neighborhoods of Manhattan, far more frequently than anywhere else: even the buildings with relatively wide façades still break their first-floor storefronts into uncharacteristically small leasable bundles. It’s a configuration that favors microretail. Here’s another example elsewhere in the Upper West Side. 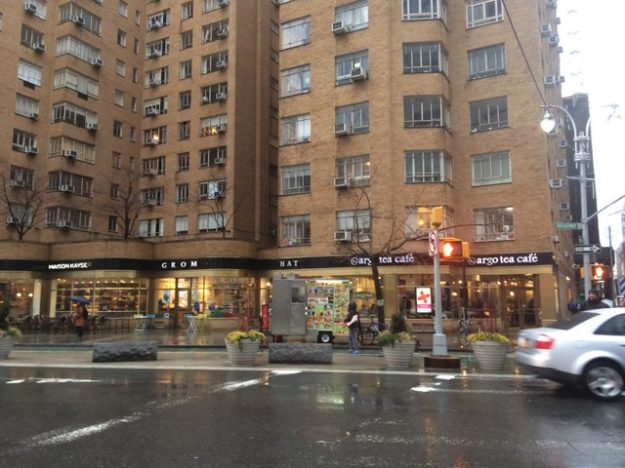 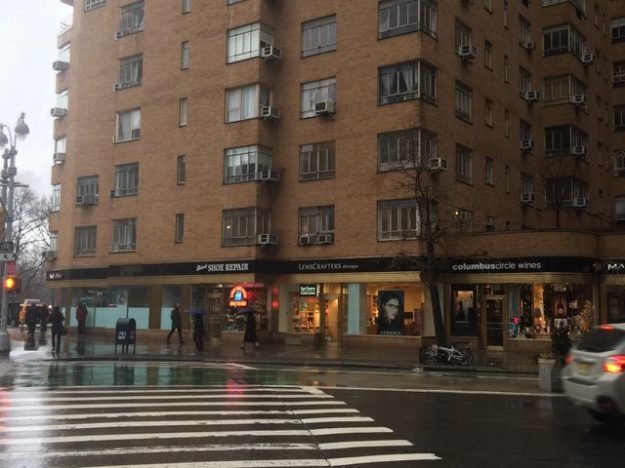 It’s a residential building with a formidable floorplate, spanning the entire block. It could have easily hosted the New York equivalent of a big-box—say, for example, a PetsMart, an urban-scaled Target, or even a Best Buy. But the building’s owner—or perhaps the original developer—decided to partition the wraparound storefront space into a variety of smaller shops, no doubt deducing that it’s easier to find numerous small tenants than a single large one. And, of course, securing only one small tenant out of ten (a 15% occupancy level) is still a superior revenue generator on a pro forma analysis than failing to secure that much-needed single large tenant, which would result in a 0% occupancy.

But how successful is it? A more thorough investigation of that initial photo with the three small storefronts yields intrigue but nothing conclusive. So what’s the reason behind the intrigue? Well, these photos are approximately two years old (January 2017) and two of the three storefronts are a total bust. 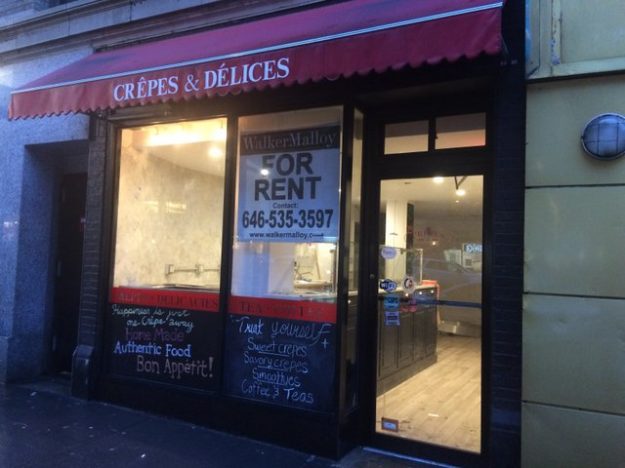 One of them, Crêpes et Délices, was already out of business on the date of my visit, though only recently so. Its two-year run, however, had apparently been fraught with unsatisfactory health department inspections. 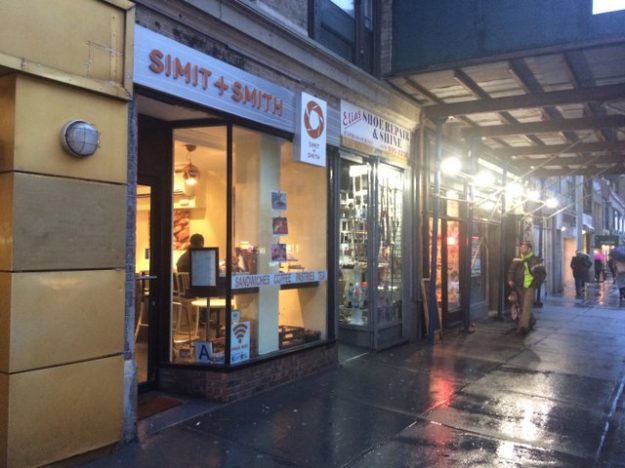 The second storefront (seen to the left in the photo above), Simit and Smith, is a global bakery with an emphasis on Turkish pastries (the omnipresent ring-shaped simits). As recently as 2017 it had five locations in the metro; two years later, all have closed and it survives as an online wholesaler. This leaves only the final storefront, the workaday Elias Shoe Repair and Shine. Like the even tinier shoe repair stops in my previous article, these entrepreneurs provide a useful service in a city where—thanks to its walkability—it’s safe to assume that shoes fall into disrepair a bit more frequently than in Kansas City.

So the edifice featured in the photos above has about a 33% success rate over the last two years with its small shops. Not great. But perhaps these examples aren’t sufficiently micro? After all, a superficial peek into their windows suggests that, however small, they might exceed that 300-square-foot threshold. By contrast, check out Box Kite Coffee just a few doors down. 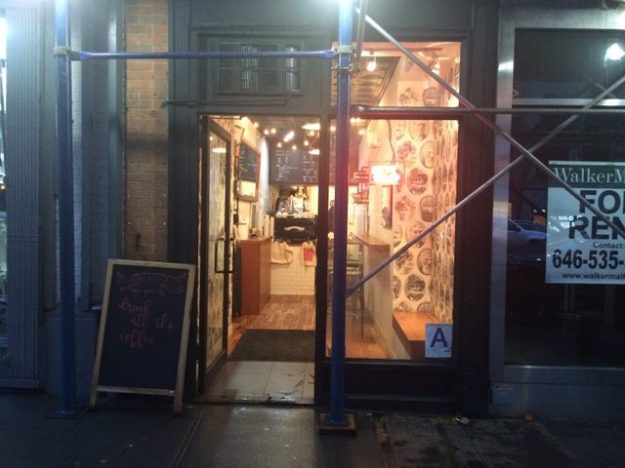 It’s probably half the size of the previous storefronts, and, at this Upper West Side location, offers exclusively a small assortment of caffeinated beverages. 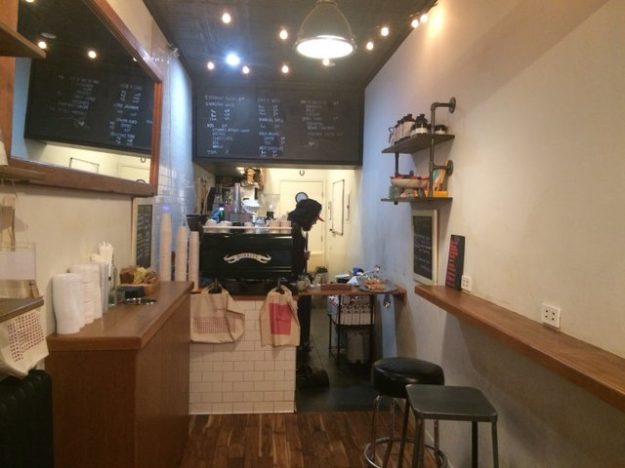 And it doesn’t pretend to cater to those who wish to linger. While chairs and a table (singular, not plural) do exist, they accommodate no more than six customers. 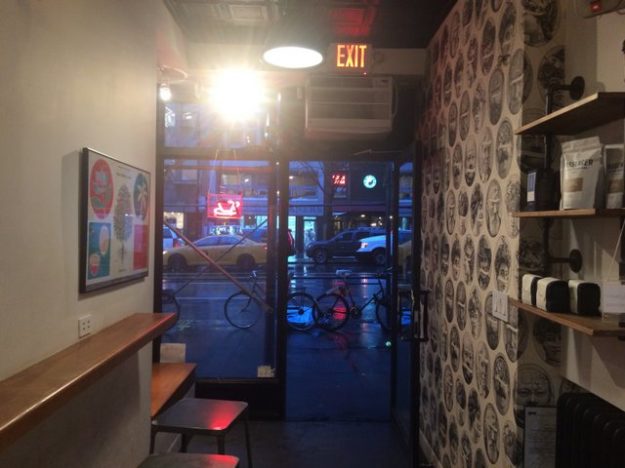 Two years on and Box Kite Coffee continues to thrive. Its other location in Greenwich Village (which I haven’t visited) apparently offers tastings of various comestibles, giving it more of a restaurant vibe. But it’s still comparably tiny: the café only seats 12.

Even at this ultra-micro level, the verdict seems to be mixed at best. Box Kite’s neighbor hasn’t fared so well. 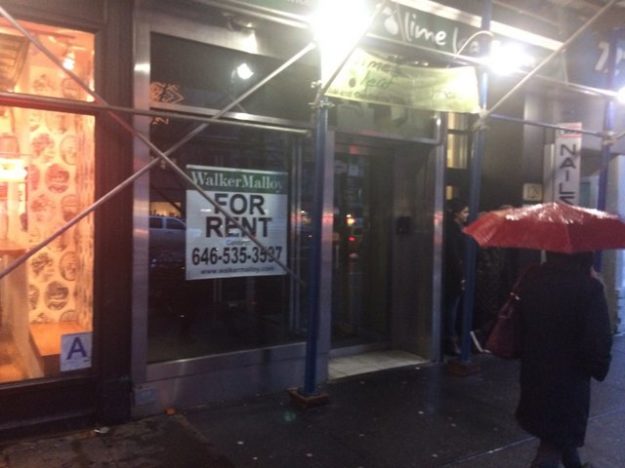 And, just down the street, another equally tiny offering. 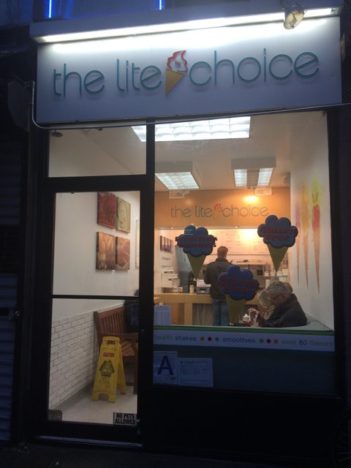 It’s winsome enough interior, but two years later, I see no evidence that the ten or so locations of The Lite Choice remain in business (despite a functional website at the time of this article).  No matter how much the small size helps reduce the leasing costs, it’s tough to run a profitable small biz in Manhattan.  As a reader noted after one of these businesses closed, you can’t afford the Upper West Side rents by selling crepes alone.

All in all, I’d say it’s tough to reach a definitive judgment on microretail in the Upper West Side or Manhattan in general—the place where one would think it would most likely flourish. Then again, my approach—simply looking at storefronts and seeing which ones have two-year staying power—is far from anything approaching scientific inquiry, and it’s not even reliable from an empirical standard. I might have just had dumb luck, randomly choosing a single block in Manhattan with high tenant turnaround. After all, the majority of small businesses close within five years; for retail and restaurants, it’s even worse (especially in the current punishing climate).

Ultimately I can’t say if microretail is the great white hope. If my conclusions weren’t so wishy-washy, one could argue I’m suffering from confirmation bias: I’m seeking out examples to validate my existing theories. But I haven’t yet really formed a conclusive decision, except that I remain optimistic: it’s certainly not yet a retail typology that we should dismiss. The Internet’s capacity to revolutionize how we purchase goods has imposed an indelible barrier to businesses with a bricks-and-mortar presence, and those entrepreneurs who stubbornly cling to the idea of a storefront will have to find increasingly creative ways to compete with the ease and convenience of online shopping. And those algorithmically derived recommendations. Microretail won’t satisfy all tenant demands; after all, national chains are unlikely to benefit much from such a constrained space, and they can afford the bigger leasable spaces. And bigger national chains are less likely to fold after two years, thus explaining why so many prime corners in the Upper West Side remain persistently empty: the landlords have determined that its cheaper to keep their storefront vacant (thus paying fewer taxes on a devalued property) than to occupy it with a sub-prime tenant when they can hold out to get something mainstream and reliable, like a bank. It’s a variant on the prisoner’s dilemma, with the city and its property owners squaring off, neither one winning—one merely losing less.

Despite the numerous barriers, microretail still holds promise in densely populated, affluent areas like the Upper West Side—certainly more promise than the sprawling suburbs of Nashville, to offer one of many counterparts. As a typology, it remains a sort of sieve to the market, refining its customer base while encouraging small biz owners to bolster the uniqueness of their offerings. After all, if you want to attract random passers-by who spontaneously decide they’re in the mood for mustard, mayonnaise, or horseradish, you’re not going to seek out a storefront previously occupied by Barnes and Noble. Or even Simit and Smith, for that matter. Way too big.

*The correct verb tense is “sold”. La Maison Maille closed in 2017 after 2.5 years in operation and is, at least in the US, exclusively an online retailer.

PrevSuper Bowl sales: intercepting the alligator pears before they pass the pigskin.
Aberdeen XChange: a growth machine that choked before the engine’s finished revving.Next

12 thoughts on “Microretail in Midtown Manhattan (Part Two): can it salvage the city’s shuttered storefronts?”