Aberdeen XChange: a growth machine that choked before the engine’s finished revving.

In the Baltimore exurb of Aberdeen, Maryland, a brand-new strip mall sits on a corner at a moderately busy intersection, awaiting a tenant. 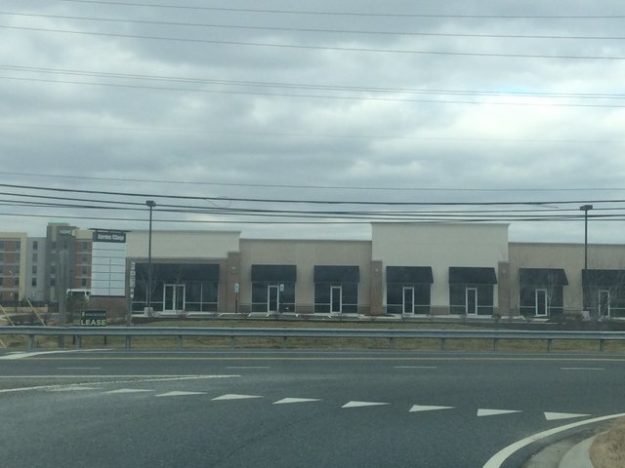 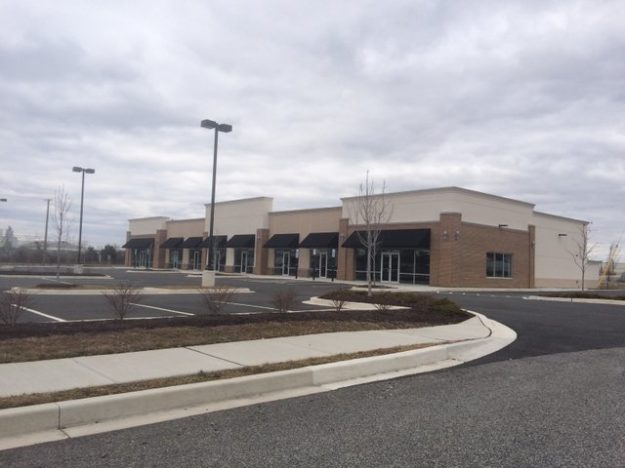 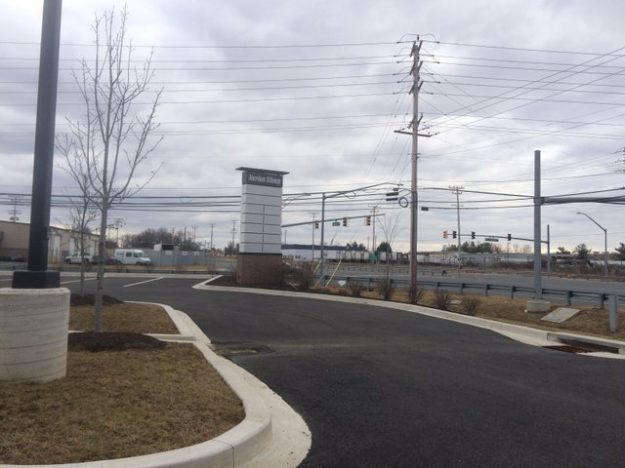 Aberdeen XChange is not bad looking, as strip malls go. It aligns with contemporary architectural standards for this type of thing: its chief cladding materials consist of tan fake stucco (probably EIFS) and a brick veneer, with black awnings and lots of windows. 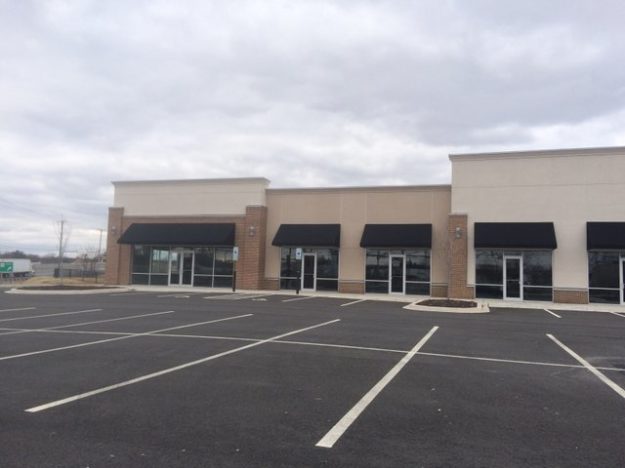 It boasts copious tree islands in the well-striped parking lot. 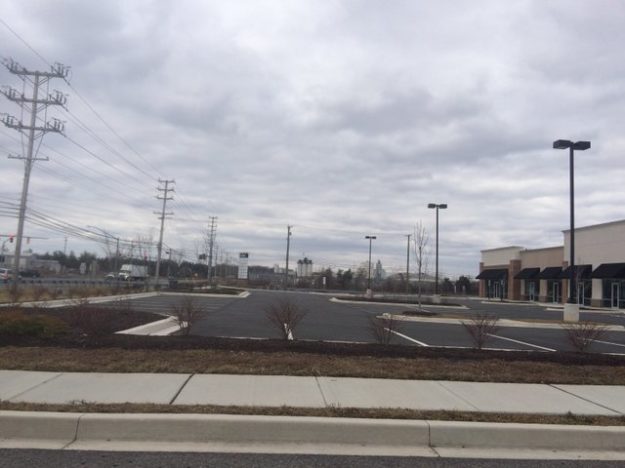 One of the storefronts at the western end features a side window for potential drive-thru service. 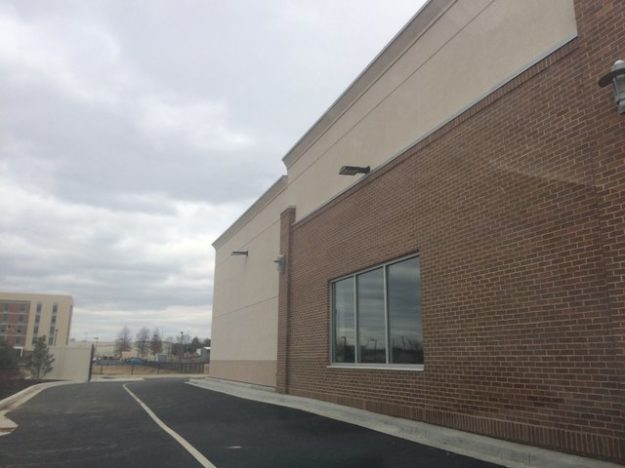 And the back features separately designated parking for employees, truck unloading, and a shielded dumpster. 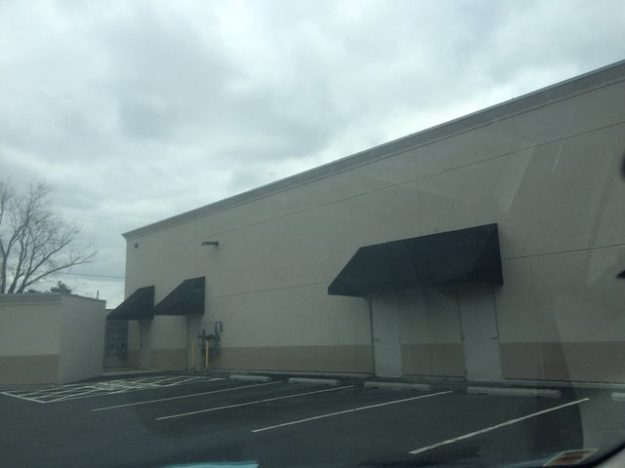 Aberdeen XChange isn’t making any waves; judging from a superficial survey of the premises, it’s a predictably but competently designed strip mall. And it stands less than a half-mile from the U.S. Army’s Aberdeen Proving Ground (APG), by far the largest employer in the immediate area.

Nonetheless, as of January 2018 (when I took these photos), Aberdeen XChange was unoccupied. I can find no evidence that it has secured a single tenant in the year that has transpired, and, to be perfectly blunt, I don’t see much of a chance that things will change in the near future. I suspect it will remain vacant for months—possibly years.

None of the socioeconomic indicators favor a place like Aberdeen XChange. First of all, it’s possible that construction ended a few years prior; the only evidence I can find is a Google Street View from November 2015, before it was complete. If we speculate that construction ended in the summer of 2016, it’s likely that the structure had already sat empty for eighteen months when I took the photo. Secondly, just because the developer picked a prominent intersection near an employment hub doesn’t guarantee that he/she chose the right intersection. Check out the map below, where the purple circle indicates the location of Aberdeen XChange.

The entrance to APG is where MD 715 (Aberdeen Throughway) cuts off to the southeast. And our strip mall in question is even closer to a busy Walmart Supercenter. However, the Walmart’s primary entrance is not Old Philadelphia Road but US 40 (Pulaski Highway) just to the north, a major arterial that receives considerably more vehicular traffic than this marginalized, historic path. Old Philadelphia Road merely offers a secondary means of ingress and egress for the Walmart. Not surprisingly, Pulaski Highway hosts the preponderance of Aberdeen’s commercial and retail uses. That said, it’s hardly a flourishing corridor, filled with drab retail buildings and strip malls that largely cater to low-end businesses like storefront churches. I featured one of these eyesores a year ago. Walmart is by far the most active commercial node in the area. The only other newish tenant is a Home2 Suites by Hilton, but it too has a primary entrance on Pulaski Highway.  Even if the intersection of Old Philadelphia Road and Aberdeen Throughway were as prominent as the developed undoubtedly would like to think they are, this is the wrong side of town, as far as retail is concerned. Aberdeen’s more prosperous corridor (Target, Home Depot, ShopRite), is to the north, near the interchange of Interstate 95 and MD 22. Judging from the age and general condition of the commercial buildings along Pulaski Highway, little demand exists to invest in and upgrade commercial properties, which doesn’t bode well for a new strip mall like Aberdeen XChange, whose owner undoubtedly seeks to attract nationally known tenants of the type that are quite rare on Aberdeen’s south side.

But location, location, location is hardly the primary reason I’m ringing the death knell for Aberdeen XChange before it’s even had a chance at life. The fact is—as I’ve noted numerous times on this blog—the country is facing a surfeit of commercially oriented real estate unlike anything we have seen before. And the U.S has always suffered an oversupply of retail-oriented buildings, at least compared to other peer nations. However, with the consumer’s burgeoning fondness for online shopping, we aren’t just facing a glut of real estate; we’re suffering an unprecedented paucity of potential, financially solvent tenants. With the latest announcement of the liquidation of Payless Shoe Source, the nation’s shopping centers are about to face about 2,100 new vacancies. It’s a brutal climate out there for commercial property managers.

Bearing in mind the prevailing conditions, why did Aberdeen XChange get built? Surely the developer saw the writing on the wall, and if not, couldn’t the bank have raised the red flag? It’s not like this is a new phenomenon. I’ll reduce my speculation to a few scenarios: 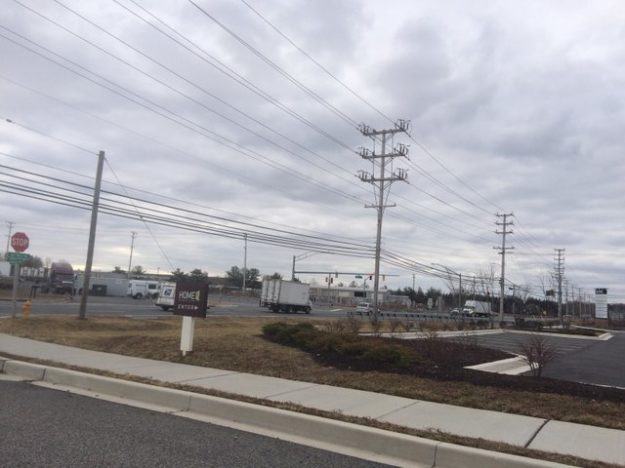 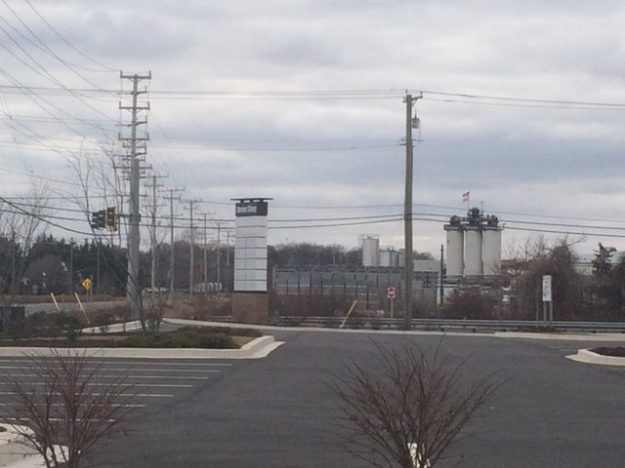 In due time, Aberdeen XChange will probably secure a tenant. But it won’t come in the fashion the development team had hoped for: after all, the pro-forma undoubtedly depended on a reasonable level of absorption at this point. It is currently generating no revenue, and it may have to lower its leasing rates to secure even a single tenant. If that fails, the bank may have to foreclose, and then a team of real estate investment trusts—those that specialize in challenged assets—will likely buy the property and reorient it toward subprime tenants: probably nonprofit organizations or small non-retail businesses that don’t really need a building on a semi-prominent corner with windows and a huge parking lot.

Regardless of what happens, the outcome for Aberdeen XChange isn’t what the development community had in mind for strip malls back when they were springing up like mushrooms in the 1980s. They were foolproof; that’s why they were everywhere, and at least partially why our suburbs are facing such a crisis in their overbuilt auto-oriented commercial districts in 2019. Then again, the fate of Aberdeen XChange was unanticipated as recently as 2012, and since market forces morph even faster than buildings deteriorate, we may be on the brink of a new trend that puts all these boring shopping plazas back to economic fecundity. Year-round hydroponic gardens, anyone?

PrevMicroretail in Midtown Manhattan (Part Two): can it salvage the city’s shuttered storefronts?
Mid-century modern in main street Yankton: where everything new is old again.Next

18 thoughts on “Aberdeen XChange: a growth machine that choked before the engine’s finished revving.”