Tendencies in the Tenderloin, a neighborhood that polarizes.

My first blog post in San Francisco is atypical (if anything about this blog topic could ever be considered typical), but it’s probably a significant one given the socioeconomic context. The wealthy core to one of the richest regions in the country—probably among the wealthiest in the world—San Francisco is also the only city I’m aware of that can still claim a neighborhood as memorably named as The Tenderloin. Incidentally, it was at one point in time a common term to describe red-light districts in America; Manhattan had a generous cut for a Tenderloin, though the name (not the cut) has since completely fallen out of favor…everywhere except in SF. I don’t believe it is common knowledge that “tenderloin” was at one time a generic term for vice districts, still used up to and including the early 20th century. I wasn’t aware of it until the research for this blog. Most people, if they hear “Tenderloin” in reference to a place, will think of the San Francisco neighborhood, if it’s even a familiar term at all.

To this day, the densely populated neighborhood makes for an unlikely face to that head-shaped peninsula (the nation’s second most densely populated major city), since it’s among the poorest and most economically deprived districts of any major city in the developed world. Certainly its contrast with the surrounding neighborhoods in San Francisco—let alone the tony Pacific Heights neighborhood (barely a 10-minute walk away) makes it a hot point for considerations of the yawning socioeconomic chasm between the rich and poor in the Bay Area in general. Though less associated with brothels today than in 1918, the Tenderloin still no doubt boasts a concentration of vice-related activity that is to the right of the bell curve, but its broader notoriety for homelessness, gangs, open narcotics use, and—most recently—human defecation no doubt overshadow some of the more traditional, predictable moral failings. And even among those who aren’t living on the street, a disproportionate percentage of the housing in the Tenderloin consists of “hotels”: multifamily residences called single-room occupancy (SRO) units, where individuals can rent a small room furnished with a bed and a desk for a fixed rate per week or month, while using shared restroom or kitchen facilities down the hall. In expensive cities, SROs have long served as a resource for individuals who, most likely, would otherwise face homeless shelters or outright homelessness. In San Francisco, they remain most heavily concentrated in the Tenderloin.

It’s a rough neighborhood, to be sure, but also one that, like most dense, mixed-use areas in San Francisco, contains a variety of small businesses, distinctive restaurants, eccentric retailers, and a burgeoning art scene. Those aspects are, no doubt, what these banners scattered throughout the Tenderloin intend to celebrate: 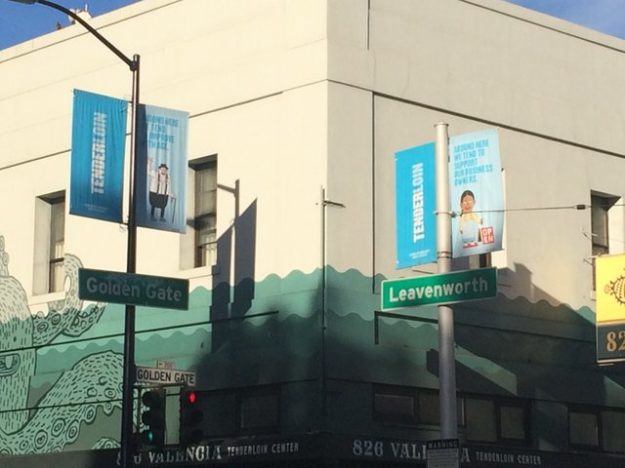 I only captured these two examples, but they’re everywhere. Such banners have proven a common practice in various large cities to help accentuate the identity of certain neighborhoods; I’ve blogged about their strategic use in Manhattan’s Meatpacking District not too long ago. And I certainly don’t begrudge organizations like the Tenderloin Community Benefit District for seeking new ways of accentuating the positive for a neighborhood that, in the eyes of many San Franciscans, has not shaken its negative associations.

Unfortunately I didn’t think ahead to get photos of any of the other banners, but this link captures quite a few of them. They all feature a winsomely simplistic illustration of a resident, coupled with a sentence that begins with “Around here we tend…” So we encounter the following:

“Around here we tend to support our business owners.”

“Around here we tend to improve with age.”

“Around here we tend to nurture our families.”

And, I remember one, which I’m probably somewhat misquoting, but it went something along the line of “Around here we tend to express ourselves boldly.” (I’ll correct this if someone helps me here.)

This is all fine and good, and I respect the efforts of the Community Benefit District at this attempt to foster pride and an improve perception of the Tenderloin. And I suspect the use of the verb “tend” is a syllabic pun. But “tend” also suggests inconsistency—that these aren’t always characteristics embraced by the community—only sometimes—and it begs the further question: aren’t these statements that just about any neighborhood would claim for themselves? And it doesn’t necessarily matter if its true: I, for one, suspect that the “nurturing our families” is a bit weaker in the Tenderloin than elsewhere. After all, a neighborhood dominated by SROs, homeless assistance nonprofits, and other scattershot individuals seeking the most centrally located reprieve from San Francisco’s exorbitantly high rents is not likely to claim an abundance of families. (We can certainly hope not—a growth in families would likely be a negative social indicator for a neighborhood like the Tenderloin.) It may actually have one of the lowest percentages of nuclear families of any census tract in the country, though I admit that I assert this without engaging in the research. And childlessness already generally characterizes San Francisco—the one large American city with the single smallest proportion of its households that include kids.

In the end, I’m just not confident these image-boosting banners offer a great deal more than deflection—a condition obvious to any visitor who sees a reality on the street that doesn’t comport with these banners. 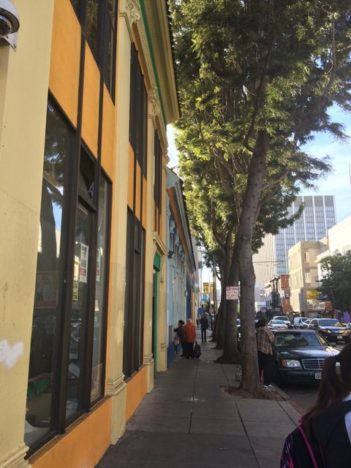 At any rate, the comparative scarcity of children does reduce the need for child-friendly censorship, giving more justification for people “to express [themselves] boldly”. Which they’re doing, and leaving the evidence on the sidewalks. At least the banners capture an optimism and idealism that continues to define this region of such pronounced socioeconomic extremes.

PrevFirst Harvest: seeking a fertile ground amidst the expanding blight.
Colorful commemorations: what do painted bikes mean to the unschooled?Next

5 thoughts on “Tendencies in the Tenderloin, a neighborhood that polarizes.”