When a state chooses to feast on its identity, what does it use to fill its plate?

It is completely unreasonable for me to use license plate background art as a synecdoche for a state’s prevailing ethos, but I’m going to do it anyway. Why not? The design of a license plate is broadly attempting to achieve this effect, more so than even a flag. Whether license plates originally intended this or not, this is, after at least a half century of state-specific art, exactly what they’ve become. By and large, most states use their license plates as a means of propagating a key aspect of the state’s identity. It’s another form of branding.

Beyond that core observation, tremendous variability exists among the fifty states. Some, like California, apply little more than a cheeky cursive font across a white background—the style the state has applied for over thirty years. Older readers may vaguely remember the sunset logo that state deployed through most of the 1980s, but, all in all, California remains fairly fixed in its appearance. Two other states that have rigidly applied the same appearance since time immemorial are Minnesota and Delaware, the latter of which has used gold lettering on a blue plate along with its motto (“The First State”), for more than half a century. A survey recently determined it to be the nation’s least appealing plate, but, after going unchanged this long, it has earned a familiarity that outstrips the state’s low population (and, therefore, the comparatively few number of Delaware-tagged vehicles on the road). And I’d wager that the color combination, visible throughout Delaware (up to and including a different variant of blue and yellow in the state’s equally unappealing flag), evokes the New Sweden colony established near the site of present-day Wilmington—among the earliest settlers of the present-day state.

But, rather than focusing on states that take a conservative approach to branding through their license plates, I’d like to look at two neighboring states that refresh their image every few years. One is Ohio, which has used the design below for about two ore three years (meaning it is likely on the way out). 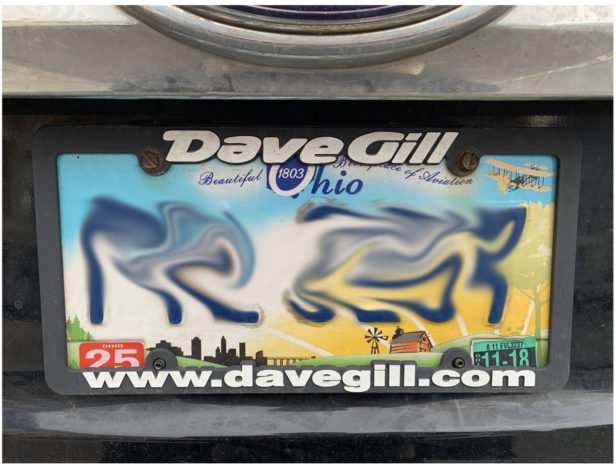 And the other is Indiana, which has only just begun to “roll out” this new plate. 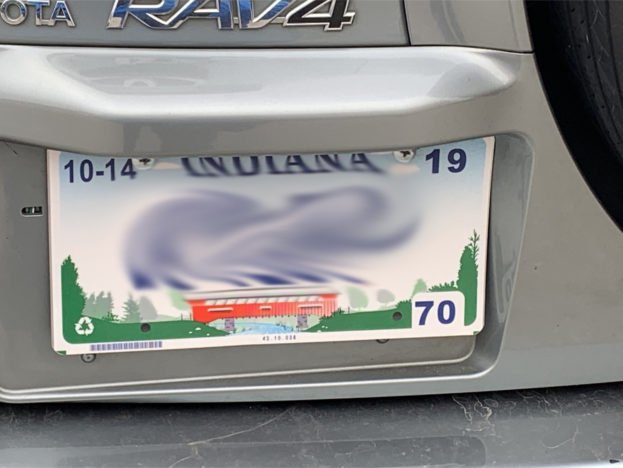 Since the Indiana tag is new, it’s not yet widespread; only vehicles that are early within the replacement sequence have yet to adopt it, and in January of 2019, the bicentennial plate is still a bit easier to find on the road. This will soon change, and before long, the featured photos of these two abutting states should be widely visible to anyone between Terre Haute and Youngstown—at least until the next design for Ohio comes into play.

Both states have chosen for the design a sort of archetypal landscaped tableau. Both feature an agrarian countryside, but Ohio also reveals a skyline looming in the distance, visible in the lower left of the plate. Indiana features a covered bridge in the bottom center. While it may seem unfair for me to assert that these distinctions have helped shape the outlooks and political ethos in the two culturally similar states, I am, again, going to do it anyway. Ohio has nearly five million more people than Indiana. It has three cities with metros at or exceeding two million: Cleveland, Columbus, and Cincinnati. The horizon skyscrapers on the plate could easily stand in for any of these three cities. Furthermore, Ohio has an additional three cities whose metros are approaching or exceed 1 million: Dayton, Toledo, and Akron. While the silhouetted skyline in the plate is probably too expansive to signal these three smaller metros, each of them is considerably larger than Fort Wayne, Indiana’s second largest city. And Indianapolis is the only city in Indiana approaching Ohio’s three metros in population.

While both states routinely feature barns and windmills that one encounters in the lower right of the Ohio plate, it would be considerably harder to drive across Indiana and expect a skyline view of the sort that is somewhat common in Ohio, the nation’s seventh most populous state. Indiana, though by no means a lightly populated state, is ranked 17th, with about 6.7 million people. I’m uncertain if Indiana is ranked first in the nation for covered bridges; most surveys suggest Pennsylvania is first at nearly 220, and Ohio is second. However, Indiana certainly has a lot (approximately 130) for its somewhat lower population, and Parke County in eastern Indiana has the highest concentration in the country. Thus, a motorist is perhaps more likely to encounter a covered bridge while traveling across Indiana than any other state.

But the core distinction rings clear: Ohio can assert itself much more powerfully and credibly as an urban state, while Indiana essentially more rural. Note that I use the comparative adverb “more” in each case; by no means is Ohio as urbanized as some of the states further to the east, but a panoply of urban clusters define the state much more than in Indiana. Urban advocacy has a stronger foothold in Ohio because Ohioans are far more likely to live in close proximity to a major city. Superficial though these distinctions may be, they explain a lot about the two states’ divergent social, political and economic trajectories over the decade. And they explain why the winning designs for their license plates look the way they do. At least until they try something new in three years or three months, making California and even Delaware seem far more fixed—and perhaps more confident—in their identities than these two Midwest counterparts.

2 thoughts on “When a state chooses to feast on its identity, what does it use to fill its plate?”