Rethinking a restroom from just the right angle.

I have yet to create a special tag or keyword on my blog for my numerous articles on public restrooms. Perhaps I should. Sometimes I feel like a letch for writing about them so much, and yet I know I’m hardly alone having a certain fascination—not only in the interior design, but the engineering for safety, the unexpected amenities squeezed within a stall, and even the choice of labels for “male” and “female” in these androgynous times.

So here’s a head-scratcher: a nearly century-old building that experienced an almost complete renovation and repurposing to general offices in recent years. 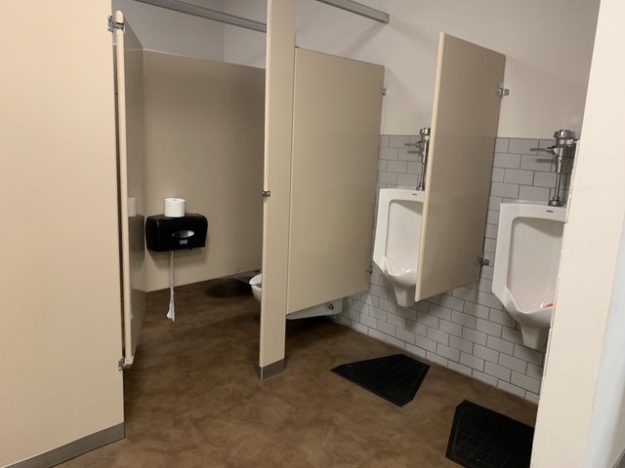 Seems like a typical men’s restroom, right? Take a look at the restroom stall (not the urinals) and the wall to the left of the doorway. No pivot to the left a bit further. 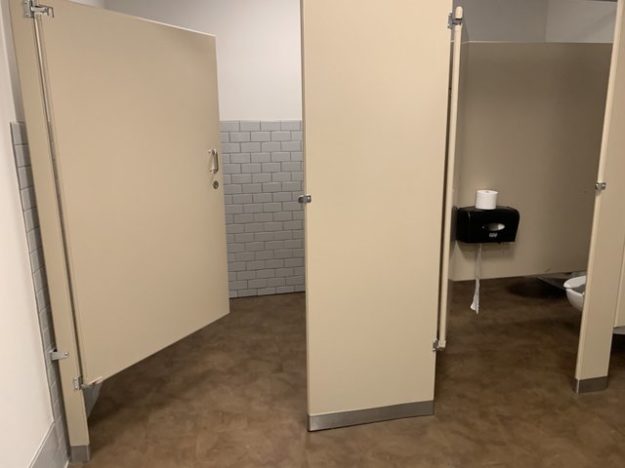 It features an extra-wide doorway, which leads to… 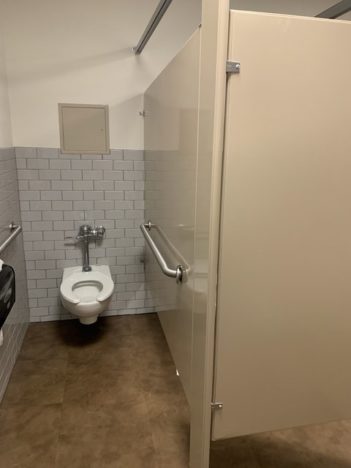 …another stall. Not bizarre in and of itself, but check out the configuration of the walls, once inside the larger stall. 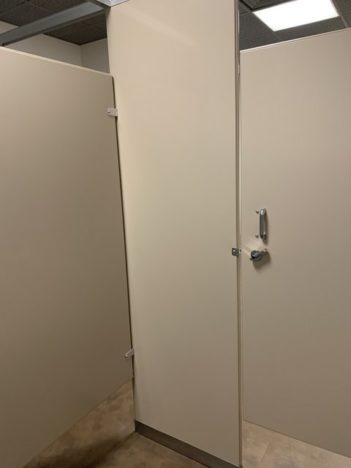 Essentially, the large stall wraps around the smaller one in an L-shape, resulting in an unusually elaborate array of partitions to demarcate the space.

So why the extra effort? I’d say it’s pretty obvious from that extra-wide doorway: the stall with the L-shaped passageway is the ADA compatible one. After all, it also has the compulsory support bars on either side of the toilet, typically installed to assist people with access and functional needs.

But, beyond the wide doorway, the rest of the stall is unusually narrow. Would a person in a wheelchair genuinely be able to rotate his way from the chair onto the toilet? I have no doubt that, where there’s a will, there’s a way. But, whereas the optimal handicapped-friendly restroom offers width so that the person can approach the toilet laterally, this one it’s a head-on approach, using the support more like a gymnast’s parallel bars. It would take some upper-body strength that’s significantly to the right of the bell curve.

The whole configuration is bewildering, but only when one looks at it in isolation. This is an old structure, after all, and I suspect the placement of the toilets (and all the accompanying plumbing) predates the renovation. And predates the Americans with Disabilities Act as well, meaning the original developer situated those toilets in the walls long before the consideration of wheelchair access was a thing. The renovators, rather than reinstalling the toilets with more space between them—a phenomenally expensive prospect (new plumbing is disproportionately pricey)—decided the cheaper solution would be to reconfigure the partitions themselves, creating stalls that defy common sense, but still probably barely scrape by in terms of code compliance.

It’s not an elegant solution, but it’s a practical one. And, in an era when repurposing old buildings is not just a good conservationist gesture (an anti-sprawl act) but increasingly smart in terms of IRR (internal rate of return), it’s good to see a developer who found a solution that didn’t require massive surgery. Because the re-engineering of pipes is painful, whether structural or biomedical.

PrevColorful commemorations: what do painted bikes mean to the unschooled?
Super Bowl sales: intercepting the alligator pears before they pass the pigskin.Next

3 thoughts on “Rethinking a restroom from just the right angle.”