First Harvest: seeking a fertile ground amidst the expanding blight.

Over the holidays I briefly visited my hometown of Indianapolis, and even more briefly made a stop to the Greenwood Park Mall, which was “my mall” growing up and a frequent subject of this blog in earlier years. Back then, I singled this mall out for its resilience, as other malls (in Indianapolis and across the country) showed clear evidence of decline. I felt confident that Greenwood Park Mall would continue to flourish when its competitors stumbled, and I outlined a number of factors that had kept it going strong.

My last article highlighting the Greenwood Park Mall in its entirety was eight years ago. A lot has transpired since then: dead malls have escalated from an underground phenomenon for cults of curiosity seekers to an absolutely mainstream concern. Retail has imploded to the point that the word “apocalypse” seems less like hyperbole and more like a general observation. Online shopping takes an ever bigger hit out of bricks-and-mortar, so that comparatively few people visit malls as a recreational activity. And now, even after a successive stream of consolidations, the largest and most prominent of department store chains are teetering on a precipice. Bon-Ton Stores, Inc. closed all its 400+ locations in the spring of last year; whether or not it will re-emerge as a services marketplace with an online focus (but some intermittent storefront locations) remains to be seen. And, at the end of the year, perennial underachiever Sears Holdings filed for Chapter 11 bankruptcy protection, coupled with the announcement of yet another wave of closures of both Sears and the increasingly endangered Kmart.

Greenwood Park Mall had the last Sears standing in the Indianapolis metro, and while it will close soon, leaving a void in the 1.3M-square-foot mall, my quick visit still suggested that it’s generally a high-performance mall—an increasingly rare sight, since more and more malls are suffering not just from low foot traffic but from the fact that the retailers themselves are closing, with nothing left to fill the vacancy. Obviously this is a chicken-and-egg situation, but it’s hard not to remain cynical about even the strongest malls. I’d put Greenwood Park in the likely top quartile for its low vacancy rate, the continued reliance on national brands, and general aura of prosperity. But that quartile has declined in its aggregate; the bar for success is just so much lower even than in 2010, let alone 1985, when malls defined American consumerism.

How can we tell? Look no further than one of the newest inline tenants. 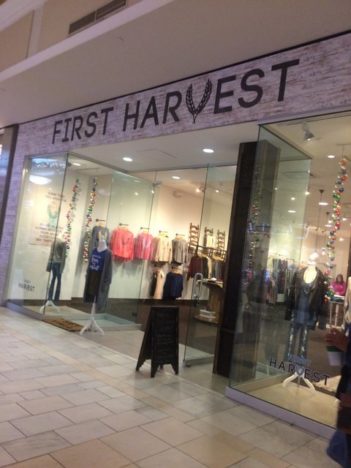 It’s a nice looking logo, there atop the entrance. I call out this logo only because it appears well-funded, showing a level of investment one wouldn’t expect if this were a mom-and-pop. Local retailers tend to use basic, cheap-looking lettering; not this time. My initial instinct was to assume that First Harvest was an emergent national brand that I had not yet heard of. All fine and good, but clothing retailers aren’t forging new paths in malls for the most part, unless they’re among the best and most successful in the country (the top 5%), which Greenwood Park Mall is not. So what is First Harvest? A look in the storefront window offered a hint. 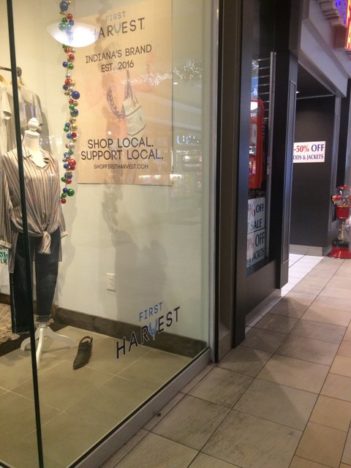 It is indeed local, and clearly it hasn’t been around that long. But let’s look at the other side wall. 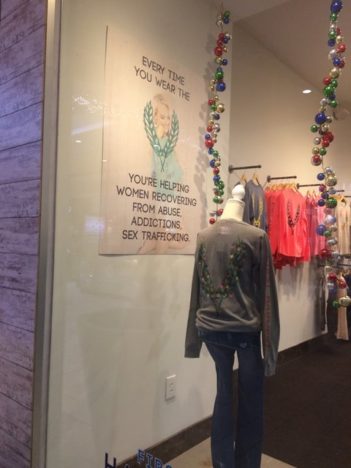 It appears to donate a considerable portion of its revenue to causes that support the betterment of women: specifically 10% of proceeds to a ministry called Mercy Multiplied. In fact, after further investigation, it looks like First Harvest has organized its entire brand around its support of this nonprofit; the carefully cultivated clothing style is merely an intermediary for the support of this charity.

I had a difficult time determining the locations for First Harvest; the polished-looking website is coy about the company’s physical presence. But, from what I can tell, it has inline space at the upscale Fashion Mall, the exurban Hamilton Town Center, and Greenwood Park Mall on the north side—three of the highest performing retail nodes in the Indianapolis metro. First Harvest also apparently has a location in Mishawaka, though I don’t know the strength or viability of the University Park Mall up there. I also couldn’t tell if First Harvest itself is a 501(c)(3) organization, though it clearly references “proceeds” instead of “profits”, which may be a legally mandated signal. Regardless of the ultimate profit motive, it’s clear that First Harvest is a vendor with a considerable charitable aim, which is an uncommon if not unheard-of presence in all but the most downgraded, struggling malls. Charities couldn’t historically locate in malls; back when malls were desirable, the least would cost too much. Conversely, First Harvest has chosen generally successful malls, and it has adapted a look that suggests it’s an emergent national brand.  But it’s not. 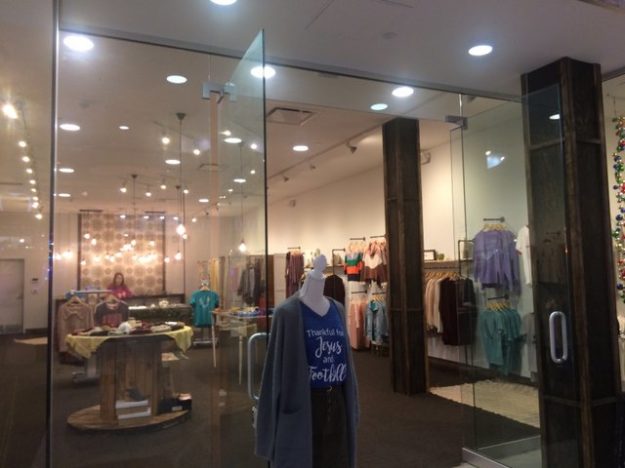 So why choose Greenwood Park Mall? First Harvest’s decision to locate on a busy corridor in a mall that has retained an approximately 95% occupancy rate is an indicator of a few conditions that I can think of: a) the proprietors have deeper pockets than is usual; b) this mall has deteriorated enough that it is offering reduced-rates leases to companies with a probable higher risk profile than the widely recognized brands that have dominated malls up to this point; or c) Simon Property Group, the manager of this mall (and basically all malls in Indy) is recognizing that carefully leveraged innovative brands may be the future of retail profiles in an era when far more clothing companies a closing that starting. Perhaps all three conditions apply. Watching the video on the story behind First Harvest—and their impulsive decision to quit conventional desk jobs to start a clothing boutique—it’s hard to tell whether they are simply naïve about the state of retail in the 2010s or they are savvy enough to have found a niche that is viable amidst the countless other casualties. Based on the growth trajectory since its founding in 2016, First Harvest may very well belong to the latter of these two conditions. Let’s hope.

PrevWhen a state chooses to feast on its identity, what does it use to fill its plate?
Tendencies in the Tenderloin, a neighborhood that polarizes.Next

6 thoughts on “First Harvest: seeking a fertile ground amidst the expanding blight.”