Colorful commemorations: what do painted bikes mean to the unschooled?

Nearly four months had passed—a long time for me—since my last visit to Pentagon City in Arlington County, Virginia, home to a big, well-situated, and (as malls go) prosperous mall, a booming multifamily housing sector, numerous key big-box retailers, and a variety of office complexes—all within walking distance of the none-too-pedestrian-friendly Pentagon. The area is growing like crazy. And, since it’s right next to Crystal City, that district that will soon receive the new name National Landing (courtesy of Amazon’s HQ 2.0), it’s likely to keep blooming for the years or even decades to come.

The handful of remaining undeveloped or underdeveloped parcels reveal how unremarkable the land uses were before this mid-20th century boom: mostly low-grade logistics and light industrial, auto dealerships, and, just a bit to the south in Alexandria, the expansive Potomac Rail Yards, which ended a 130-year run as a switch yard in 1989, after its operators determined could be put to a more profitable use. An expansive cleanup of the Superfund site throughout the 1990s, coupled with extensive planning and community involvement, has transformed the Potomac Yards into affluent apartments, condominiums, and townhomes. By 2019, the majority of the land in these three districts—Pentagon City, National Landing (FKA Crystal City), and Potomac Yards—serves a vast array of white-collar workers and their adjacent residences through mid- and high-rise office/apartment buildings. Little evidence survives that this was once a humdrum light industrial district. The few remaining vacant parcels typically look a bit like this one in Pentagon City, where I made a pit stop just a few days ago: 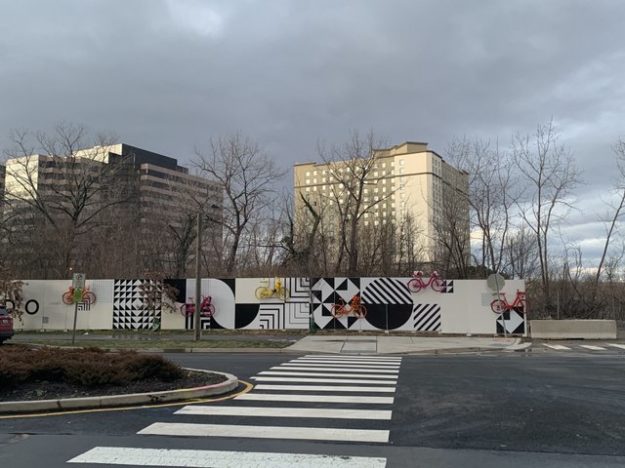 This colorful board was not here during my previous visit in the fall of 2018. Is it just an art installation, or is it an attempt to obstruct the view of a future construction or laydown site, preparing the way for another mega-structure like the one in the background?

My vote is that it’s both. And, needless to say, I’m particularly struck by the three-dimensional, “found art” portion of this makeshift mural. Let’s take a closer look. 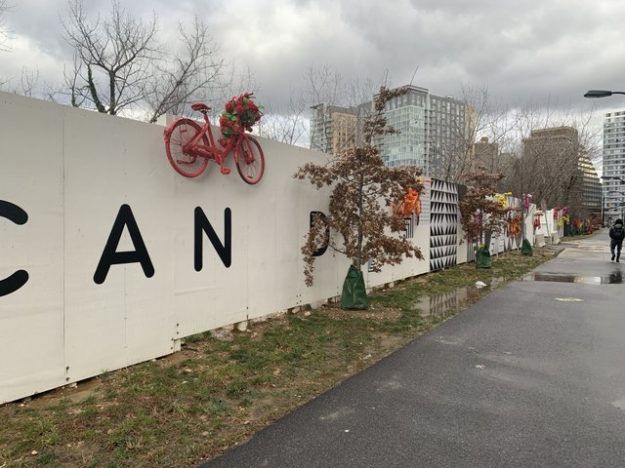 Yes, those bikes are real. They’re painted a solid single color and decked with fake flowers. 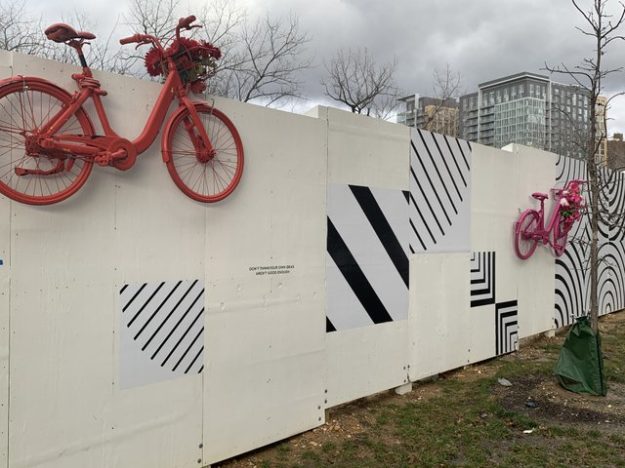 And they continue beyond the tall visual barrier, mounted onto a chain-link fence that extends to the end of the superblock. 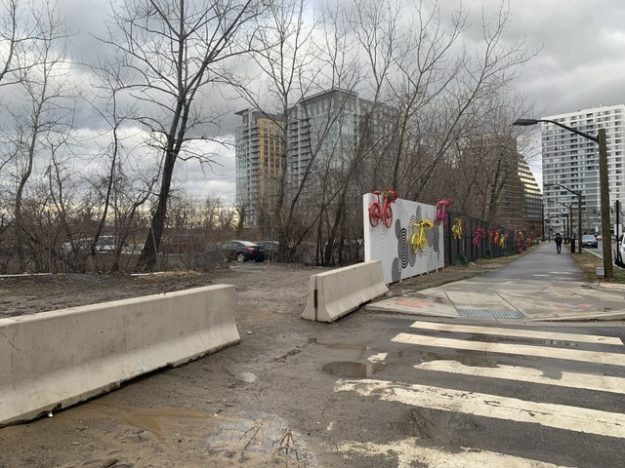 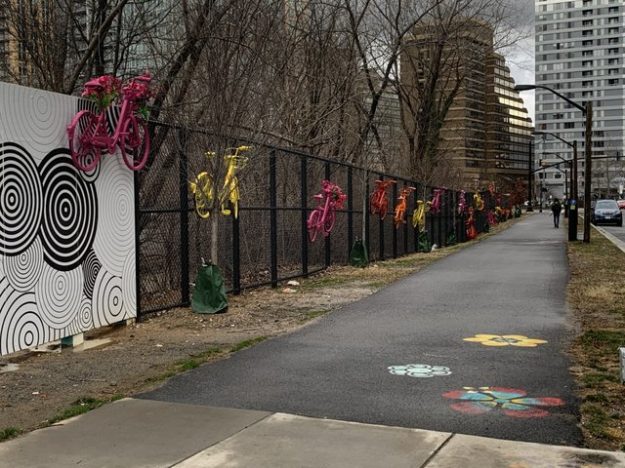 Some of the readers here are probably asking the same questions I did: are these ghost bikes?

The ghost bike phenomenon has escalated in visibility, starting from its roots as an idiosyncratic signal to the biking community, which is probably what it still was when I featured an article both on my blog and on Huffington Post a few years ago. Back then, it remained a curiosity: an old bike, typically painted completely white and permanently chained to some other immovable street fixture, which commemorated someone killed in an accident while riding a bicycle. A cenotaph targeting the biking community, or anyone who cares about bicycle safety.

Five years later, ghost bikes still serve the same purpose. Their function is slightly better known, primarily because they have become more common in cities across the country. And I suspect, even without much explanation, that most people can infer their meaning even if they never receive an explanation: after all, they largely mimic the roadside cenotaph (usually a small white Christian cross) that we have long known to symbolize an automobile-related death. Since the ghost bike’s symbolism has never been particularly subtle, most people who have encountered one can deduce what it means. The semantic quandary, then, is in regards to how many or how few people have actually encountered one. Though more visible in the past, they remain a mostly urban phenomenon—a huge contrast from the white cross cenotaph, which is much more rural. Thus, I suspect, quite a few people who live in auto-oriented suburbs or rural areas remain completely unfamiliar with ghost bikes.

And it is this unfamiliarity that most likely helped to birth the unusual art installation that shrouds future construction at this site in Arlington County. 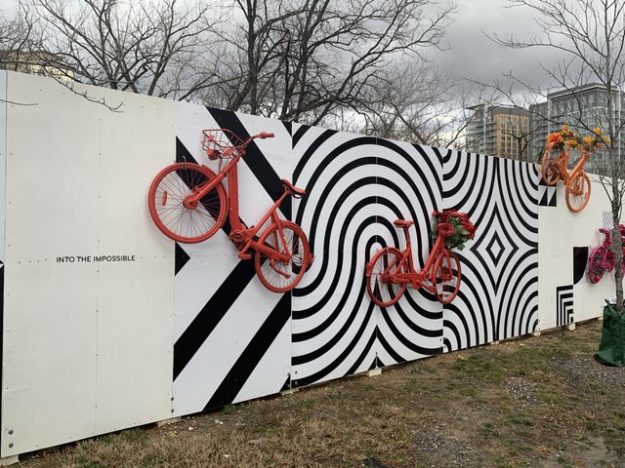 The bicycles obviously are a far cry from the alabaster that is the de facto shade for ghost bikes; if they were, they’d be almost impossible to see from a distance, up against the white board. But the individual or persons who conceived this installation nonetheless decided to coat the bikes in one of four different shades of paint, and then to garnish the baskets with flowers in a corresponding color. For those of us urbanites in the know, it looks like an expansive memorial to various people killed on their bicycles. I had to get close to determine if I was off base.

And I was off base. The tiny, intermittent text reveals nothing of bicycle-related casualties. 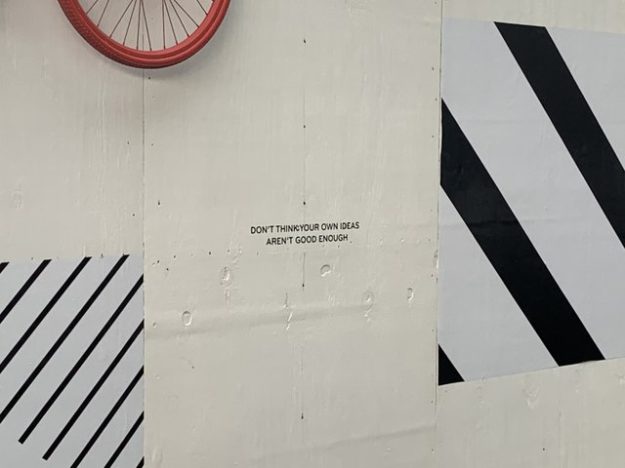 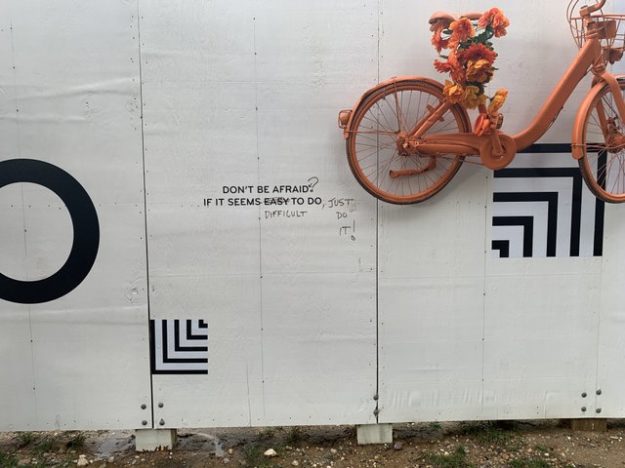 Vaguely inspirational, but certainly not commemorative. Some occasional floral stencils on the sidewalk appear to extend this installation. 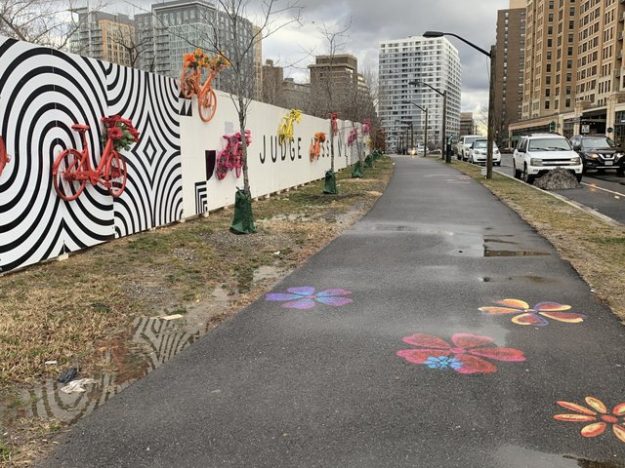 And they wrap around the corner, further substantiating the function of the display as a decorative visual barrier. 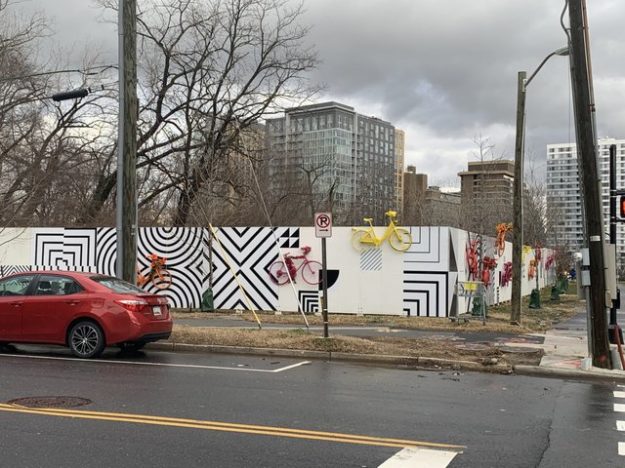 Part of the misjudgment is my own, and it may be reflective of a certain confirmation bias: I’m so accustomed to viewing outdoor art through an urbanist lens that I can’t extricate myself from it. For me, they’re never just bicycles. But I’m not letting the artist off the hook: anyone willing to use real bicycles as a primary feature to an expansive art installation should have discovered what a painted bike evokes in this day and age, if not through research, than from someone in the know. And the flowers only amplify the sense that these bikes have something to do with death.  Just like a roadside cenotaph.

I recognize that this is much ado about nothing, since this installation (presumably temporary) mostly exists to beautify a predictably drab construction screen and offer a cryptic, promotional tease for the development that is to come. But the unusual choice of imagery evocative of a cenotaph merely muddles the message, thereby diluting the impact of the ad. Because the artists failed to consider context fully, they gave us an unintentional signal toward something far more grave. (Pun fully intended.)

PrevTendencies in the Tenderloin, a neighborhood that polarizes.
Rethinking a restroom from just the right angle.Next

6 thoughts on “Colorful commemorations: what do painted bikes mean to the unschooled?”