I’ve taken a breather these last few days, after a series of particularly time-consuming posts in November, and it’s likely to continue a bit more, but I’ll provide some fodder with a teaser post like this one: of a mall that will remain unnamed (for the time being) but one that I’ve covered before. It features a store called Nirvana, seen here below, which for some readers may be a dead giveaway.

Contrary to most non-corporate inline tenants, Nirvana has been a long-standing feature in this mall over the years, featuring tchotchkes from other countries, incense, posters, t-shirts, and other assorted hippie stuff. You can generally tell it’s not a big national brand because of the uninspiring look to the sign; the national brands use something far more sophisticated. Nothing too unusual about a mom-and-pop like Nirvana, especially given the conditions of malls in 2018. 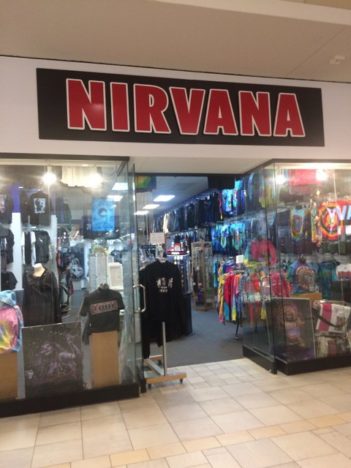 Except that Nirvana has two locations. 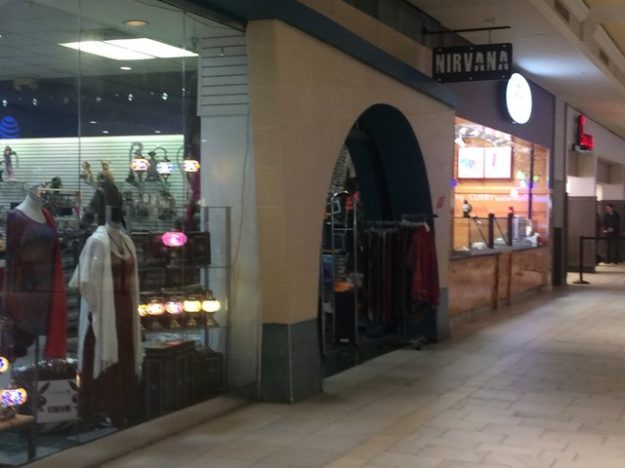 Two locations that are about 300 feet from one another. You can barely tell with this photo, but the Nirvana from the second pic is in the far-right background, with two tenants between them. 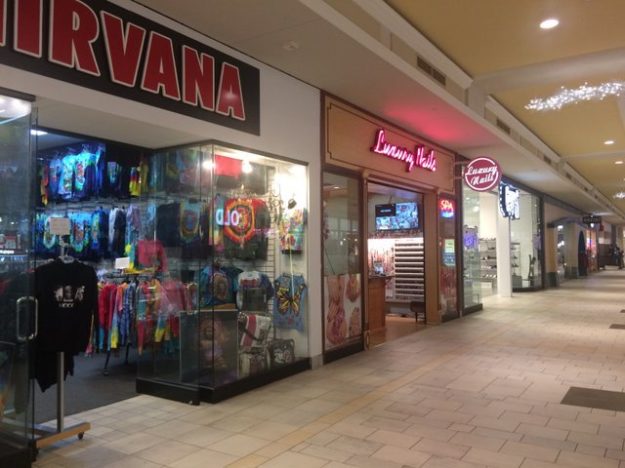 Why would a tenant do this? Is there a clear advantage? I’ve seen two identical tenants in a mall before, but usually only a very large one (super-regional) and usually on opposite ends of the premises. Wouldn’t the locations end up siphoning business off of one another?

In fairness, I asked a clerk at one of the locations. Nirvana is in the process of moving from the older location (with the plain red-and-black sign) to the newer one (with the smaller white-on-black lettering), and the two would only co-exist a few days more. But this most likely means the small company has two simultaneously operating leases, unless the property manager gave the tenant a really great deal. This sort of practice would be unthinkable during the heyday of malls, especially for a local establishment. But these are leaner times.

Perhaps the other noticeable feature—no surprise here—is the lack of people in any of these photos. I took these pics on that last Saturday in November—the day after black Friday. This mall (by all metrics still a pretty successful one) was hardly empty, but certainly no mad rush of shoppers one might have expected even just five years ago. Yet even an ostensibly successful mall still suffers such low demand—enough market softness—that smaller tenants can get away with this. If property managers are willing to make these concessions to the sort of tenants most malls would prefer not to have, imagine what sort of sweet deals the few successful remaining national brands are able to negotiate. It’s only a matter of time before they all go the way of Dixie Square Mall, the notorious relic used for the famous chase scene in Blues Brothers. But then, with the entire shopping experience migrating to the internet, will we really need the space for that many call centers?

PrevPhilly’s subway entrances: should we cast great infrastructure in iron or cast it away?
A vacant lot on the California coast: green activism or the color of money?Next

5 thoughts on “Didn’t find a shopping nirvana? Try three stores down the hall.”