Malls are imploding; restaurants are in a tailspin. Can I get anyone a cup of coffee?

In an era of progressive retail collapse, one submarket that seems to be flourishing is the coffee shop. Although the restaurant scene has surged in the wake of a conspicuous decline in recreational shopping, the pundits have also anticipated that we are at “peak restaurant” and that a restaurant bubble-burst is imminent.

But is that restaurant bubble actually underway? From my vantage point in the nation’s capital, it is obvious that the market is under strain, as the less competitive and poorly managed local establishments begin to fail, sometimes after just a few months in operation. And even the seemingly ironclad fast-casual niche market has begun to manifest some obvious softness, including the once-mighty Taylor Gourmet, which closed all operations just as it was breaking out of the DC metro in an attempt to make a name for itself in other alpha-city markets like Chicago. This closure came hot on the heels of my potentially faulty assertion that fast-casual was likely to displace a lot of long-standing, family friendly, quintessentially suburban national chains.

That said, even if we have hit peak restaurant, I have yet to witness any real evidence the sort of onslaught of closures that one typically associates with an economic bubble bursting; rather, we might be seeing a market correction that swiftly displaces the less nimble and appealing aspirant chains. In short, restaurants aren’t suffering a pandemic the way clothing or electronics retailers are. The generally muscular economy may help buffet this restaurant decline—then again, it’s doing nothing to spare the beleaguered vendors of durable goods. My prognostication is that restaurants will, in general, continue to do well for years to come. After all, if we aren’t shopping together, we have to find somewhere to hang out for a night on the town.

Regardless the status of restaurants in the years ahead, the coffee shop doesn’t even seem to be facing even the slightest threat of a bubble. If anything, they’re doing better than ever. Fifteen years ago, they were among the first establishments to embrace the idea of free wireless internet; it helped lure people into lingering with their laptops, creating a hangout space that hybridized consumption, working remotely, and people-watching. These days, some of the most successful coffee shops have actually reverted back to carefully meted wireless, limiting the hours of use for a single purchase, or (in the most buzzy neighborhoods of Washington DC) eliminating wireless altogether. They don’t need wifi. People hang at coffee shops regardless, and a person who orders a cuppa and then sits for three hours on the Internet robs a successful java joint of coveted seating.

Obviously not all coffee shops succeed, and I have a sneaking suspicion that locally owned establishments in car-oriented suburban settings find it much more difficult to compete with Starbucks than their more walkable, urban counterparts. But the boho, overstuffed couch ambience that characterized so many coffee shops at the turn of the millennium has diversified considerably. The shaggy-dog spot still exists, but equally common are the third-wave coffee shops where the baristas mimic sommeliers, providing flavor profiles among their various roasts and regions to align with the consumer’s increasingly persnickety palate. The coffee’s gotten pricier too. Nonetheless, amidst this inflation, it’s amazing how many coffee shops a fashionable, densely populated urban neighborhood can support. As long as each one offers something different—and that difference may be predicated more on ambiance than caffeinated comfort—they are likely to pack in the patrons until the early evening.

With that sort of lead-in, I’m a bit reluctant to hone in on an old familiar for the remainder of the post: a Starbucks. Yawn. But let’s contextualize it first. 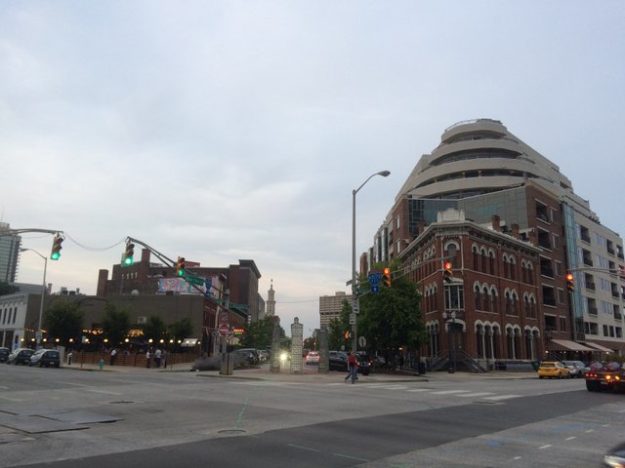 The above photo is the “trailhead” of Massachusetts Avenue in Indianapolis, one of the most fashionable neighborhood arterials in the city. At this juncture, seven blocks comprise the spine of the mixed-use neighborhood—seven elongated blocks, since Mass Ave is a hypotenuse to the right triangle created by its function as a diagonal radiating out from the absolute city center. And along or immediately adjacent to these blocks are—at this point in December 2018—what I count to be six coffee shops. One (probably the oldest) offers light lunches amidst local artwork. One focuses on fair-trade beans (and tea leaves) from obscure and overlooked corners of the globe. One operates out of an old cloakroom and features a well-regarded local roaster. One combines its blends with froyo. And the newest arrival blends high-end coffee preparations with a men’s barbershop. 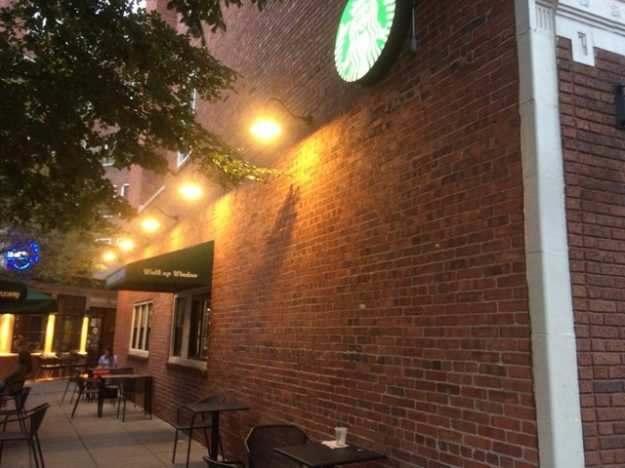 I didn’t get a pic of the entrance; it’s a conventional storefront typical of an urban setting. But I did capture what I like most about this Starbucks: the customer service window—an aperture in a 150-year-old brick commercial building. 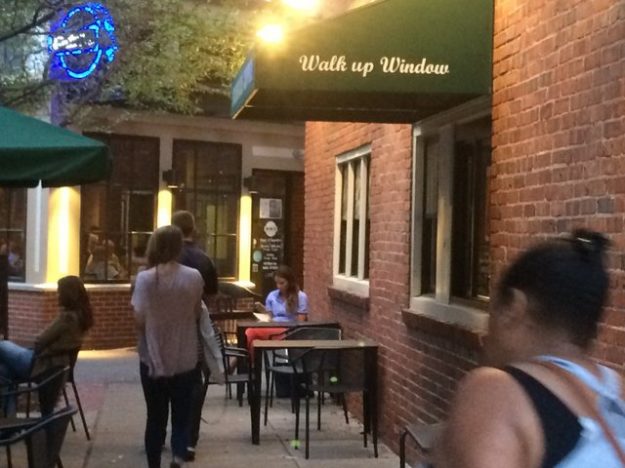 I’m sure this isn’t the only example of such an amenity at a Starbucks; the engineering of it probably only differs slightly from drive-thru windows, which are ubiquitous in the automobile-oriented Starbucks of the suburbs. But it’s not common, and it harmonizes perfectly with the well-used pocket park that it abuts. By almost all metrics, it was a wise design strategy for a Starbucks location replete with competition.

The design of this particular Starbucks in Indianapolis touches on a fact about Starbucks as a corporation that, though known by relative few, should surprise no one when they learn: it has no franchises in the U.S. and Canada. All freestanding locations are 100% corporate owned. (Certain ancillary establishments—airports, hospitals, grocery stores, college unions and bookstores—have licensing arrangements with the coffee giant, but this isn’t the same thing as an independently operate franchise, which is common among Starbucks in Europe but non-existent in the homeland.) With this level of control over the chain’s expansion, it should come as no surprise that no two locations (outside of those licensed sellers at, say, Target or Barnes and Noble) feature identical designs. Therefore, some representative from the Seattle HQ established an intimate familiarity with the general retail and socioeconomic climate around Massachusetts Avenue in Indianapolis to determine the right fit for an expansion. And they chose an old building fairly typical of urban Starbucks locations, with a sidewall that fronted a pocket park. And then installed a pedestrian equivalent of their drive-thru windows.

I’m going to go out on a limb and speculate that this corporate control explains why Starbucks locations seem comparably unchanging when contrasted with other fast-food eateries that depend heavily on franchising, such as McDonald’s, Subway, or Dunkin Donuts. Sure, some Starbucks locations close from time to time—a condition that was especially noticeable in the early 2010s, when the chain opened a variety of locations in economically challenged areas at the onset of the Great Recession. But, by and large, Starbucks locations linger, and don’t relocate a few miles away to chase income density—a tendency that budget department stores like Walmart and Target engage in religiously. As a result of this stability, it remains a big deal for many communities when they get their first Starbucks. Many third-tier and fourth-tier cities (those with populations between 50,000 and 150,000) see it as “making the big time” when there’s enough activity in their downtowns to entice a Starbucks, even though, in 2018, it’s already fairly common for even towns of 30,000 and lower to feature at least one respectable locally owned coffee shop in the revitalizing downtown. (And the coffee shop is a significant contributor to that revitalization.)

It may seem like I’ve strayed from the original topic of coffee shop popularity in general—and high-end coffee shop popularity in particular—by devoting so much attention to a Starbucks. But the fact remains: Starbucks brought the idea of a coffee shop as an elegant experience into the mainstream, and its continued prominence in the era of wifi, expensive baked goods, and all the trendy new delivery methods (cold brew, nitro, pour over) that are allowing other mom-and-pop shops to establish their niche footholds, as formerly esoteric practices became mainstream. In 1998, before Starbucks was a globally recognized brand, many local coffee shops retained the somewhat drab identity of a beatnik bar, completely with open mics and decrepit couches. A dive bar without alcohol. Such coffee shops still exist—and poetry readings, though virtually unheard of in Starbucks locations, remain a selling point to many locally run establishments. But coffee consumption has morphed from a utilitarian experience—an essential stimulant—to a social and cultural pastime, widely filling the void from the continued retreat of recreational shopping.

I deliberately provided links to all these Indianapolis coffee shops around Massachusetts Avenue, with the expectation that none of those links will get broken any time soon. I’m confident that most will do just fine, and if they close, it’s an owner’s decision that would have little to do with financials. And, in the unlikely event that Starbucks should eventually lose out to the indies (as we have largely witnessed among, say, Mexican and Italian restaurants), I have no doubt that this particular location could easily find a replacement with even more upscale caffeinated offerings. And they’d even have a walk-up window.

14 thoughts on “Malls are imploding; restaurants are in a tailspin. Can I get anyone a cup of coffee?”