Hating social media in 2018 is about as edgy and anti-establishment as making fun of malls in the late 1990s: no one admits to actually liking either one of these communal-commercial spaces, but just about everyone uses them.  (Or, at least, they used malls twenty years ago.)  I have no doubt that if I were a more skilled or enthusiastic devotee of social media, I would rapidly grow my readership.  But I refuse to use Twitter, have posted on Instagram less than a dozen times, don’t have a YouTube account (though I’m a voracious anonymous viewer), and consign my Facebook usage to caption promos of my posts on the American Dirt Facebook page.  All things considered, I’d love a greater viewership.  But I’m pretty happy that I’ve achieved what I have, given my infrequent posts and a visibility only slightly greater than the ivory-billed woodpecker.

So it’s no surprise that I don’t monetize my blog articles, and certainly don’t make a point of giving money to Facebook to promote them.  Once in a blue moon, however (if a blue moon is equal to “one year”), I’ll shell out $20 or so to “boost” the post, letting Facebook expand that post’s visibility to a demographic that I can target.  So, this year, I chose a recent article on Heider Park in the tiny seaside town of Mendocino, California.  This article seemed perfect because it was a bit more contentious than usual, it featured a prominent part of the most populous state (and one that I’ve rarely covered), and the photos turned out pretty well.  I accepted a charge of $20 to my credit card and awaited the visible results of Facebook working its magic through the boost.

But the next day, I got this screen. 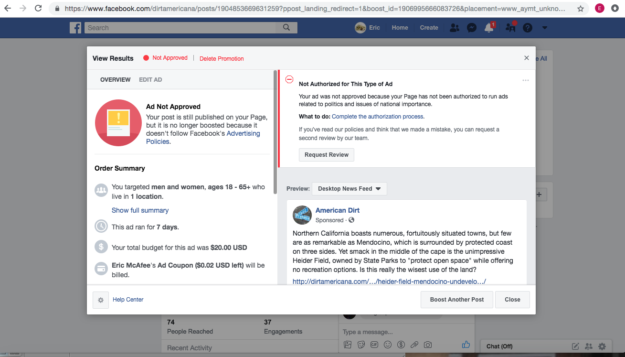 That’s right: Facebook thwarted my effort to boost because I am “not authorized to run ads related to politics and issues of national importance”.  Little did I know that an unremarkable, minimally invested  park in a hamlet of less than 1,000 people would be an issue “of national importance”, but I probably do underestimate the importance of anywhere in California.

I probed a bit further, and there’s a two-factor authentication process to help confirm “who’s responsible for the content”.  Translation: looking out for foreign influence.  Well, no matter what the intent, I don’t like having to go through any sort of political litmus test, so I decided to pass on using the Facebook boost and probably will continue to reject boosting options for the foreseeable future.  But at least this means I’m keeping my tradition of a minimally promoted blog…

PrevLandfill diversion: the California approach is gentler than it’s ever bin.
Malls are imploding; restaurants are in a tailspin. Can I get anyone a cup of coffee?Next

8 thoughts on “Promoting American Dirt: when a boost goes bust.”