Small town retail: is the outlook any better than the cities?

I’ve spoken numerous times about the dire state of retail, and I’m hardly alone. National urban publications have covered it, obsessing in recent months how even the Borough of Manhattan, America’s most densely populated urban settlement, is witnessing increasingly yawning gaps between its occupied storefronts on formerly bustling streets. And it’s not like the island is losing population: density remains sky-high (even by global standards) and growing, yet it still can’t seem to support all that retail space. The phenomenon, though more pronounced in American cities, isn’t isolated to them: London, with a comparable density, is suffering a proliferation of “To Let” signs in areas that, by all metrics, remain prosperous.

These featurettes are so commonplace that I don’t need to explain what’s going on. Of course the exploding popularity of online shopping is rendering conventional bricks-and-mortar obsolete. And, while web-based sales have been around since at least the late 90s (at that point when the Internet rose to a near-daily part of average American life), it still seemed like good retail centers—the most successful urban corridors and well-managed suburban malls—would survive the thinning market. I still thought there was a future for good malls as recently as early 2016, and I blogged about the ones that seemed to be holding their own amidst the plethora of middling shopping centers. Just three years later, the outlook is cloudy. With America’s former largest retailer, Sears Roebuck and Company, having filed bankruptcy a few weeks ago (and currently finalizing a loan), it’s difficult to say if there’s any future for malls whatsoever. And even luxury brands, heretofore inoculated from the internet insurrection, have shown clear signs of struggle, manifested most heavily by Lord and Taylor’s closure of its New York flagship (another retreating retailer for Manhattan). Our metropolitan areas are likely to suffer such a glut of unneeded retail space that it could exert an impact on urban form not seen since—well, since malls helped destroy the market viability of historic town centers in the 1950s and 60s.

Research on receding retail, up to this point, has overwhelmingly focused on metropolitan centers, where the embrace of e-trends and the over-provision of shopping space is likely to be most pronounced. But what about rural America? It’s unfair and condescending to presume that they haven’t caught on to the utility of the Internet, but higher median ages and logistical challenges, coupled with an extreme ease in getting around by car and lower land costs—should cushion the blow for remote towns and their mini-malls or strip centers off the major highway. But I’m not sure that’s the case. They’ve felt the pinch too. Several years ago I featured an austere, seriously underperforming mall in Effingham, Illinois (50 miles northeast of St. Louis) and the economically depressed mining town of Pottsville, Pennsylvania hosts not one but two primarily dead malls.

And then there’s strip malls like this one, in Wytheville Virginia, about 75 miles southwest of Roanoke. 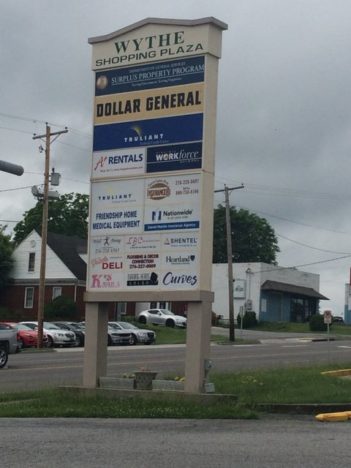 Ironically, from the sign at the entrance, the unfamiliar motorist would think it’s doing pretty well. The tiles seem full with named tenants. And, by many metrics, it could be doing much worse. But let’s take a look at the conditions in and around the parking lot. 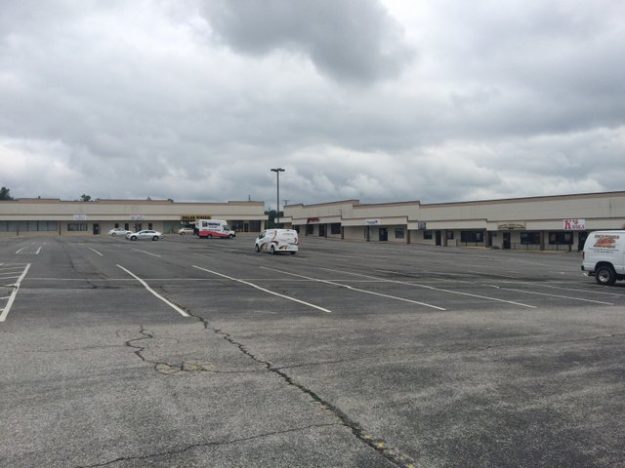 Bleak. It doesn’t help that we’re witnessing a giant sheet of asphalt, completely impervious except for its many cracks caused by neglect. If this were a newer shopping center, we could almost guarantee that it would be filled with grassy islands, at least a handful of trees, and probably some landscaping. And while I’ll grant that a Monday morning slightly before ten o’clock is rarely a peak time for consumers, this scene still reveals so few vehicles that one is prone to conclude that most stores aren’t open. The Memorial Day holiday could serve as an explanation, except that retailers don’t usually close on second-tier holidays because it’s a lucrative time for them. Somehow, though, I don’t perceive anyone associating the word “lucrative” with Wythe Shopping Plaza all that often. It’s anchor tenant, after all, is Dollar General.

But, unless that entrance sign is lying, the Wythe Shopping Plaza is mostly occupied. Let’s take a closer look at the tenant mix. 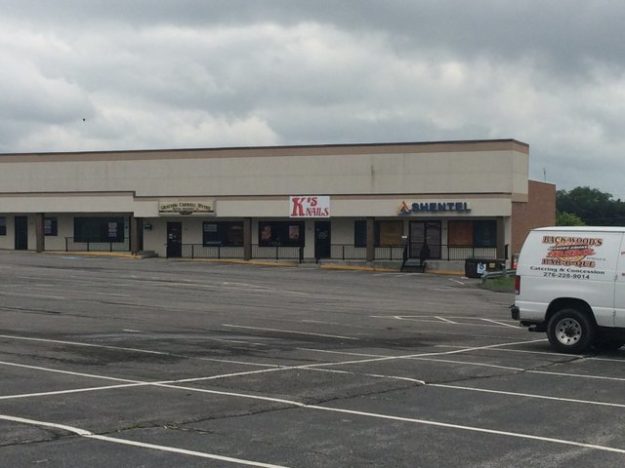 A nail salon in the middle. This and eyebrow threading have become about the most common last-ditch tenants. They’re everywhere. Declining strip malls depend on them, but even upscale shopping centers will often host them in one of their smaller spaces. I’m no expert, but I suspect they’re among few services that are income elastic: both wealthy and less affluent customers will patronize them. But these and most other personal beauty and grooming specialists remain services first and foremost—not overt retail. The storefront to the left is an insurance company; Shentel to the right is a cable and high-speed Internet provider.

Let’s take a look at other corners of this strip mall. 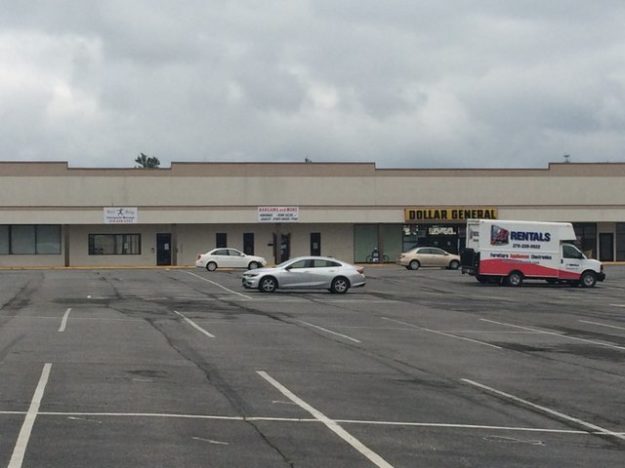 The Dollar General on the right, and, in the middle, a place called Bargains and More—an independently owned, direct competitor to the dollar store, which probably explains why it apparently has already closed since these photos from five months ago. To the left is a therapeutic massage studio. At another end, we witness perhaps the strongest evidence that Wythe Shopping Plaza is struggling. 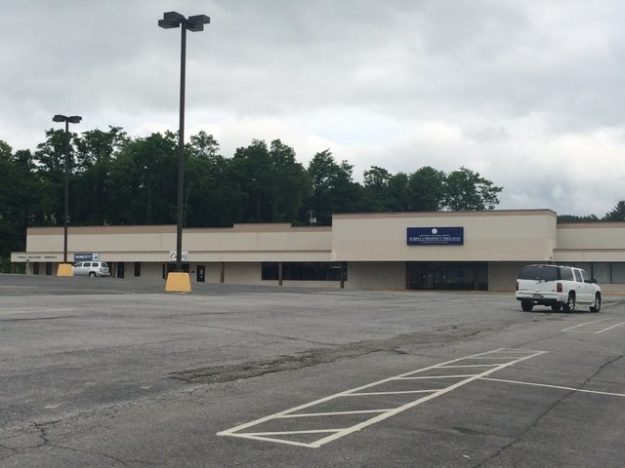 The architecture to the storefront on the right would suggest it is the anchor tenant. But a closer look doesn’t reveal any sort of big or familiar name; it’s a Surplus Property Program from the County’s Department of General Services. A public sector tenant. Odds are it’s not paying a lot of money for this large space. And, pivoting to the left— 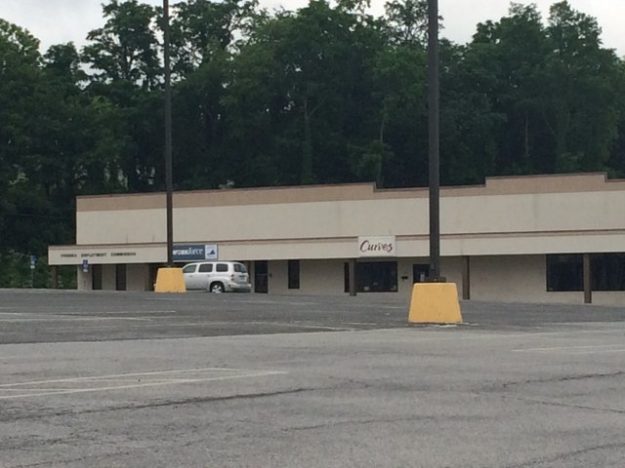 About the only other familiar name is Curves, the ubiquitous women’s fitness franchise, which, based on my observations in the past, does not seem terribly particular about the quality and visibility of its locations. Faded strip malls are the status quo for Curves. 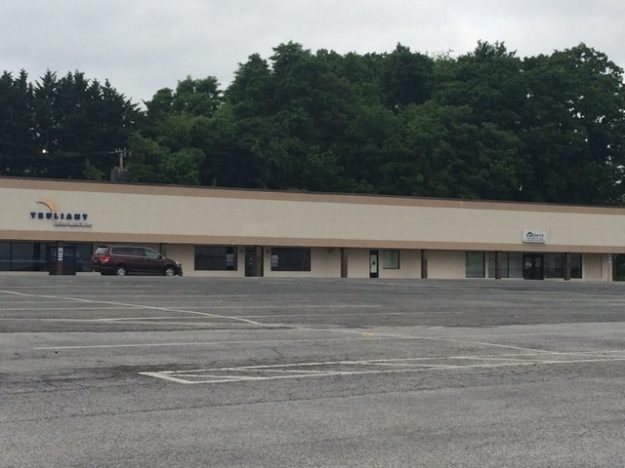 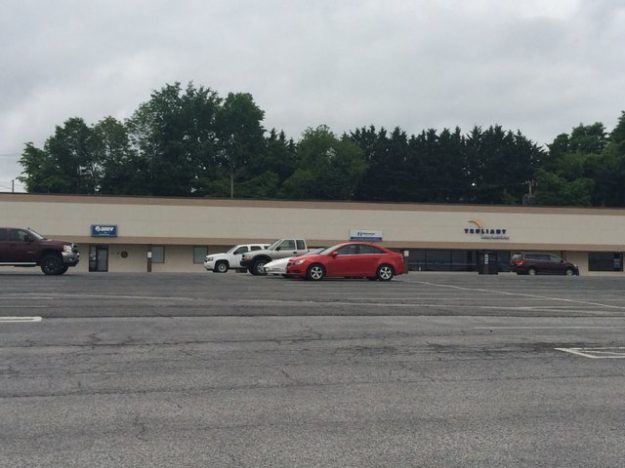 A credit union. Workforce development offices. Medical supply. Only one other national brand: Nationwide Insurance. And then, to the far left with the blue sign and white lettering, is what I suspect is the tenant that is most likely to fill the parking lot on a regular basis: a branch of the Virginia DMV. (Though a DMV wouldn’t be the source of those five cars—not on Memorial Day.) The sign at the front assumes a new irony, since its fullness remains completely at odds with the appearance.

Incidentally, some of the names fail to match the sign at the front of Wythe Shopping Plaza, suggesting the property manager can’t keep up with the tenant turnaround.

At the very least, the outparcels should reveal comparative health, right? These are the freestanding buildings that sit closest to the highway. Let’s take a look. 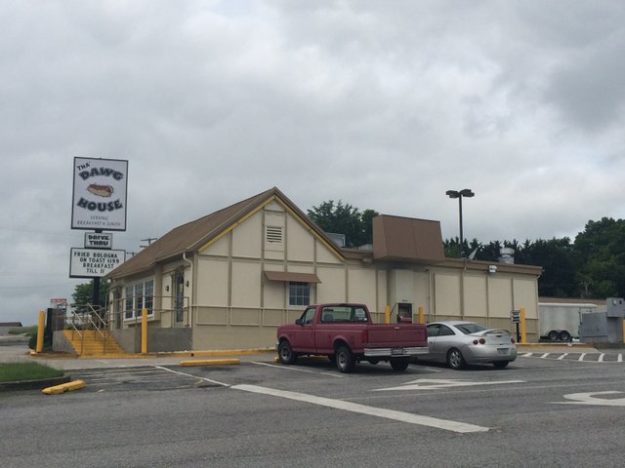 The architecture, in my opinion, suggests it originally was a Long John Silver’s, though perhaps it’s a bit too large, with that expansive kitchen stretching from the back. Although not a national brand, at least Tha’ Dawg House was functioning—and it appears to remain occupied to this day. As for the other outparcel— 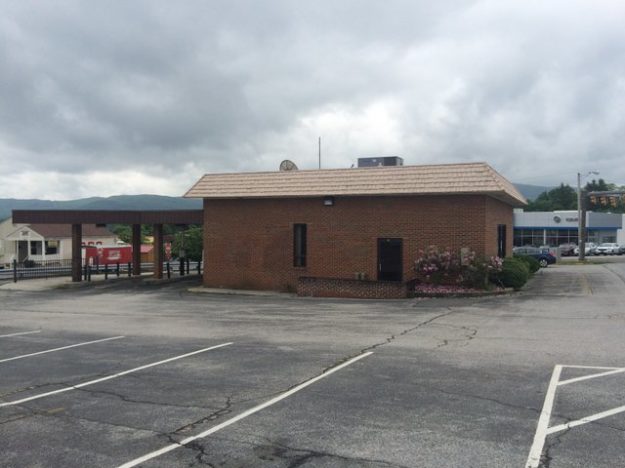 The physical form makes it look like a drive-through bank branch, but it was vacant. From my angle, this is surprising: banks make great tenants, reliably paying their rent each month, and banks are not to my knowledge experiencing some sort of widespread consolidation. In short, if a bank branch is vacant, it’s probably due to considerable shortcomings with the real estate itself. It may also fall under different ownership than the rest of Wythe Shopping Plaza. 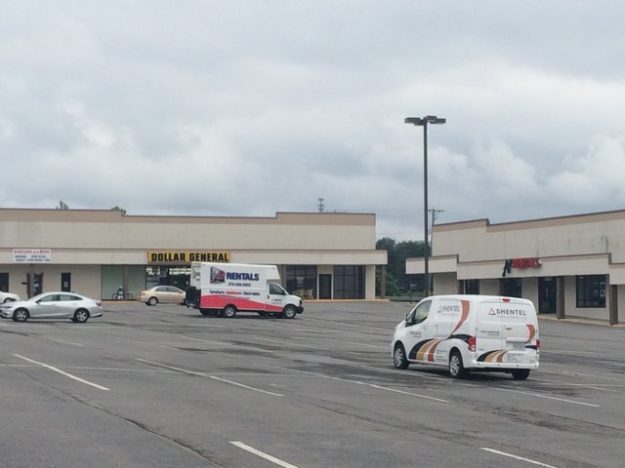 Judging from Wythe Shopping Plaza alone, one could conclude that Wytheville isn’t in great health. And, while the town of 8,200 may not be flourishing, neither the appearance nor the demographics (income and poverty levels on par with the Virginia median) suggest something is amiss. If anything, Wytheville may be better positioned for economic growth than similarly sized towns in a fifty mile radius; after all, it sits at the junction of Interstates 77 and 81, making it a likely pit stop for motorists. But this high profile doesn’t translate to great demand for a strip mall like this one. After all, it has only one tenant that overtly sells durable goods. If anything, the conditions reinforce the struggles retail faces overall, and, in this day and age, despite the drab appearance, I would assert that Wythe Shopping Plaza is transcending these struggles. After all, it remains mostly (around 75%) occupied, and it reveals the new normal for retail nodes: service-oriented, low in curb appeal, of increasingly localized interest only. The ownership of this strip mall has adapted with the changing times, but the tenant mix bespeaks a precipitous loss in value for the property compared to the time it could support a grocery store, a mid-price women’s clothing boutique, a Hallmark shop, and a Blockbuster Video. Stlll, we’ve all seen worse, and this one at least seems as aware of the changing times as its urban counterparts. Like a true apocalypse, it reaches to the farthest corners of the land.

PrevFort Ross: challenging the orthodoxy on the California coast.
Portland: the apex of bike-friendliness—by American standards.Next

6 thoughts on “Small town retail: is the outlook any better than the cities?”