During my first visit to the West Coast in many, many years, I encountered the following sight on an unseasonably cold Friday morning in the Old Town Chinatown neighborhood of Portland. 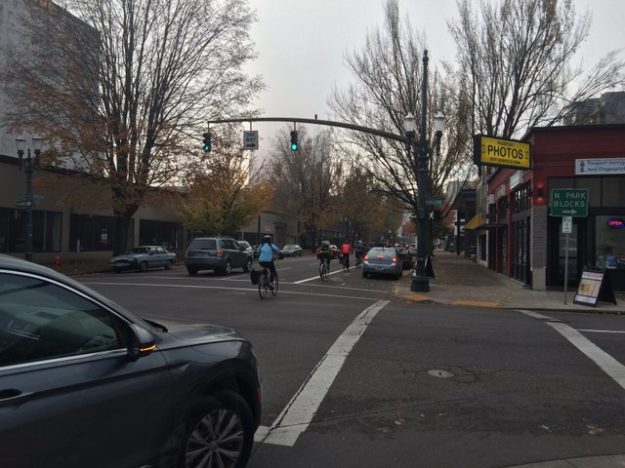 It might not seem terribly striking to readers of this blog from other countries—just a normal street scene. And even Americans may see nothing too remarkable about it, at least at first blush.

But take a look at the content in the exact center of the photo. 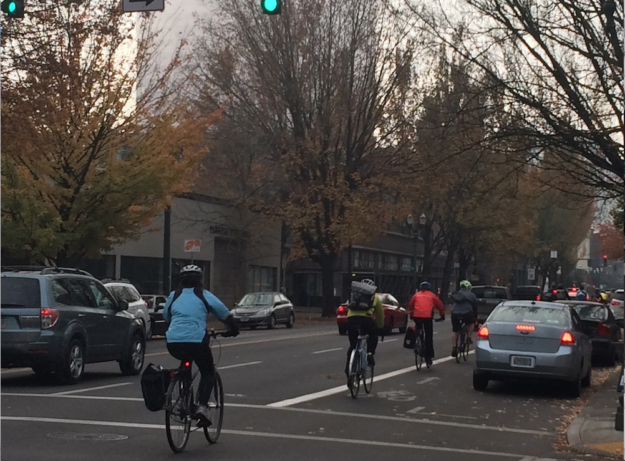 It’s a row of four bicyclists, with at least another four in the distance (to the right margin). It’s almost tantamount to a steady stream of bike traffic—a condition virtually unheard of in most of the country. But not Portland, the city that typically ranks #1 in the nation for the percentage of daily commuters using bicycles as their primary means of transportation.

Urbanists have long held Portland as the paradigm within this field of study—a sort of planning and policy Shangri-La. Not only is Portland among the few large cities to boast a de facto Urban Growth Boundary—thereby protecting some of the forest and farmland surrounding the metro from unchecked low-density development—it has boasted this UGB since 1980, with only intermittent modifications. Portland also has a regional government with electable members, a robust light-rail network, a sizable park system, and zoning regulations that encourage high-density infill development. As a result of these initiatives, the city appears uncharacteristically compact and easily navigable by foot or bicycle. And, in a country where auto dependency is the status quo, Portland bucks most of the trends.

In my recent 2.5-day visit, I not only saw numerous bicyclists, I participated nominally in Portland’s bicycling culture, using Biketown, the city’s robust bike share system, an initiative heavily supported by Nike, among the region’s largest private employers and one of Oregon’s two Fortune 500 companies. From my experience, the numerous bike lanes and comparatively narrow streets (with mostly slower vehicle speeds) made biking in Portland feel generally safe, though the numerous hills can make it a strenuous experience. Portland’s central neighborhoods seem particularly accommodating, as evidenced by the photo below: 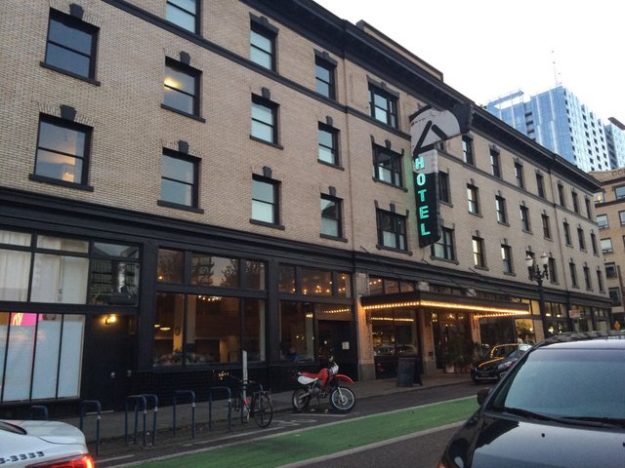 The generous green stripe is wider than the typical bike lane in American cities. Numerous stripings throughout Portland designate a buffer on either side of the bike lane, affording bicyclists extra protection both from passing cars and from “dooring”: the act when a person parked on the street swings open the car door into the bike lane and strikes an unsuspecting bicyclist—a routine occurrence that can result in serious injuries. Portland also offers what would most likely qualify as bicycle boulevards, where striping accommodates the bike to such an extent that cars must yield to them rather than merely maneuver around them. Incidentally, one feature I did not see in Portland were cycle tracks: grade-separated space embedded in a sidewalk that creates a dedicated channel for bikes—a feature increasingly visible in cities as far reaching as Washington DC or Indianapolis. My failure to identify a cycle track in Portland does not preclude them from existing; I strongly suspect they’re scattered throughout the city, with new routes planned in the near future.

That said, the initial image on this photo is only remarkable within an American context. Witnessing a cluster of approximately ten bicyclists, moving in tandem but not part of a unifying group or mission, would be a common occurrence in various European cities. In Copenhagen, for example: 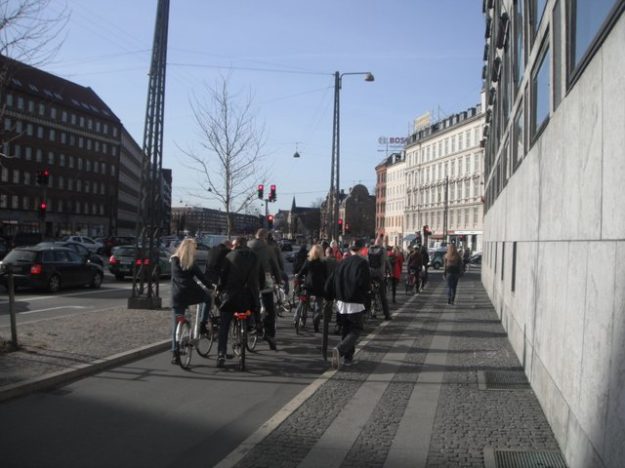 A genuine bike traffic jam! Such a visual is essentially inconceivable in the U.S., because if we were to find it anywhere, it would be in Portland.

But it’s not happening in Portland. After all, even with its #1 rank. Portland still sees only slightly over 7% of its commuters on bikes. Other top-performing cities (Washington DC, Minneapolis, San Francisco) are still considerably lower than Portland, while most American cities have a bicycle-commuting share that barely budges above one percent. Compare this to leading cities in Europe—Copenhagen and Amsterdam are the first that come to mind—where those commuting figures span well above 40%, and, in Copenhagen’s case (depending on the metric), over 60% of commuters opt for bicycles. Bearing this in mind, bike traffic is a foreign concept to Portland and the U.S. as a whole.

That said, I find planners often use these numeric comparisons as a cudgel against American initiatives, holding the country to a standard that it will never achieve, when one accounts for broader taxation and consumer spending patterns that differ widely from Europe. Quite simply, cars are highly affordable in the U.S., and maintenance (particularly fuel costs) is even cheaper. Relatively few Copenhageners can afford a car before they reach the age of 40—a notion that would seem ridiculous to most Americans outside of a few cities like New York, where living costs overcrowd the practicality of owning a car. It is common for an American to buy his or her first car in the mid-twenties. Copenhageners may enjoy bicycling, but the scores of two-wheeled vehicles on their way to work each morning is borne in large part out of necessity.

Additionally, while automobile use for the U.S. may rank among the highest in the world, the country does not necessarily rate poorly in provision and design of bike infrastructure, at least by global standards. Despite comparatively low incomes, less suburbanization, and weaker purchasing power, many Latin American and Central European countries have low percentages of bicycle commuting. Unaccommodating road conditions and weak enforcement of motorists create particularly inhospitable conditions for bicyclists. Budapest is a city that comes to mind with particularly challenging roads for bike commuters, particularly on either side of the bisecting Danube River—the sort of travel path that most cities have gone out of their way to accommodate bike traffic, either for commuting or recreation. Elsewhere in the developing world, bicycles may be common due to the unafforability of cars, but bike users must navigate urban streets against all odds—an economic necessity and a safety hazard.

Besides, the top-tier cities for bike traffic are outliers even in Europe. Germans, for example, seem to enjoy bicycling, but they also claim the highest per capita vehicle ownership on the continent. Cities in Southern Europe tend to favor bicycles for recreation. And the purlieus of Paris—particularly the prosperous west and south—are adopting low-density, single-family detached housing patterns that increasingly look like their American equivalents.   Virtually no cities are experiencing a downward trend in vehicle ownership. In Denmark, two cars within a single household is the reserve of the very wealthy, but it remains an aspiration for the upwardly mobile.

If Americans want to see more bike traffic replace that of cars, they could learn much from peer nations, since no other world cities—not even Canadian ones—have embraced such decentralized development patterns. While the vast urban spread is a condition that many Americans like (judging by how they keep seeking to buy/build new homes on the exurban fringe), it is also one that doesn’t lend itself well to getting around by bicycle. Despite these shortcomings, though, I’m willing to bestow Portland the blue ribbon for its bicycling scene—with the hope that, as vehicular commute times continue to rise, other cities will recognize that bike traffic always will be a means of lubricating the daily grind. After all, the addition of each tiny bicycle is the elimination of a hulking, inflexible, dangerous car. Portland’s great urban landscape owes more than a bit to that 7% share.

PrevSmall town retail: is the outlook any better than the cities?
Society without shopping: the bleak future of malls in particular and retail in general.Next

2 thoughts on “Portland: the apex of bike-friendliness—by American standards.”