Fort Ross: challenging the orthodoxy on the California coast.

Regardless of the time of year, any coastal sunset should supersede something as stubbornly human-wrought as a church steeple. After all, the ephemerality of that palette reduces the comparable permanence of an opulent beachfront home—or even a charming fishing village—to banality. 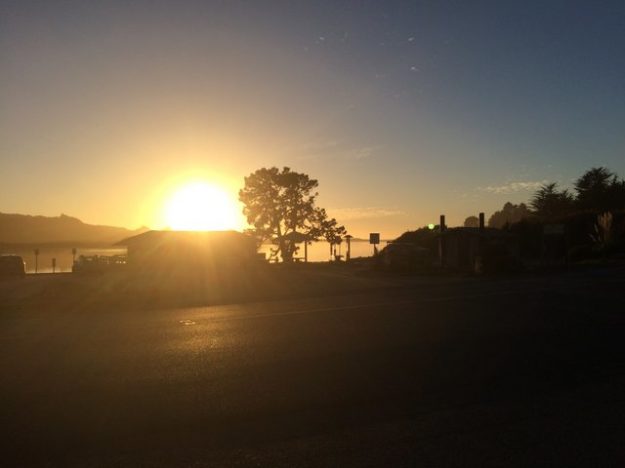 Yet here, along the north-central coast of California, in rural Sonoma County, far removed from any major human settlement, a rustic church wedged between the Pacific Coast Highway and the shore provides an intriguing foreground provocation, made especially remarkable given how the vast majority of the Sonoma County coast is unspoiled. 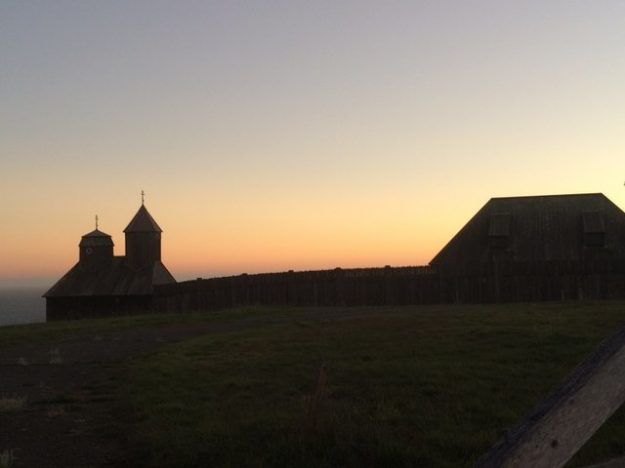 Nonetheless, it is only the visual anomaly after several miles of pure nature, interrupted along a particularly serpentine stretch of State Route 1, which gives the traveler pause to contemplate the structure. (That and the fact that the dangerous curves force vehicles to move consistently at speeds lower than 25 mph.) Even then, it could easily strike the motorist as a quintessentially American rural church, likely the focal point for a thinly distributed population that travels great miles for weekly services. But then, upon closer scrutiny, the spire features a symbol less typical of rural America. 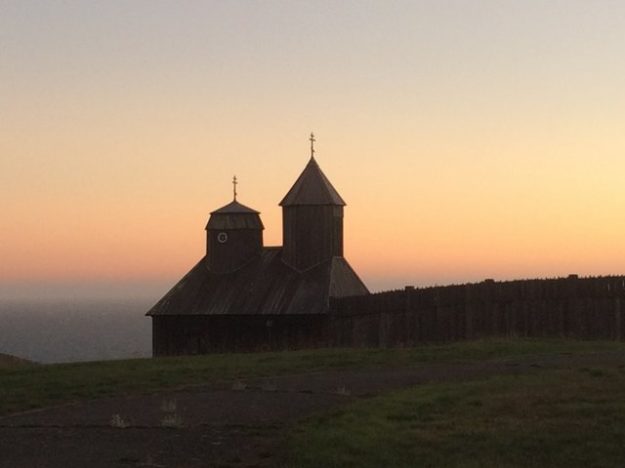 Is it obvious yet? This isn’t a conventional Latin cross of Christianity. 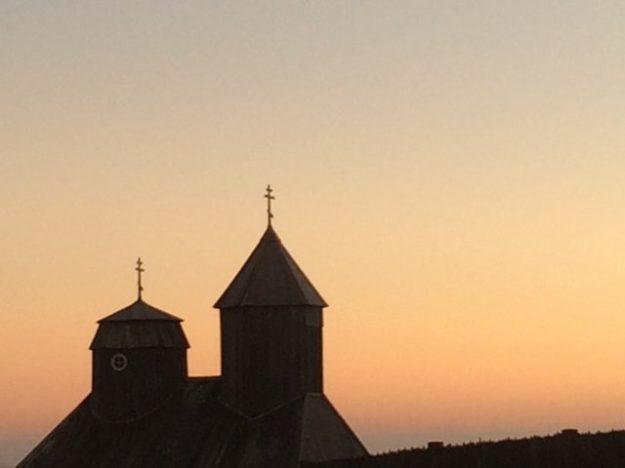 It’s the Russian Orthodox cross—that of three horizontal crossbeams, with the bottom footrest turned upward at the right side of the Lord. By no means is it a complete outlier: in the Polish and Russian industrial towns of the Northeast and Midwest, the Russian Orthodox cross is a reasonably common sight. But in rural California, it seems like more of an Easter Egg. And it’s hard to tell, at this dusky point in time, if the entire church complex is operative or abandoned. The wood appeared weathered yet in sufficiently good enough shape that it seemed like far more than a relic. But the absence of any conspicuous signage hinted at neglect.

The truth behind this mysterious edifice reveals itself surprisingly easily, with no intensive online search necessary. It is Fort Ross State Historic Park, the last vestige of Russia’s only major California settlementt. Founded in 1812 in an effort to expand the fur trade, it served as the southernmost Russian encampment along the West Coast, an expanse that extended northward into what is today British Columbia, Yukon, and, most prominently, the majority of coastal Alaska. Fort Ross may seem like an unusually Anglican (or Scottish) sounding name, but apparently it’s a poeticized variant on the Russia of old (“Mother Rus”). For approximately thirty years, Fort Ross served as an agricultural supplement to more northern Russian settlements, with considerably shorter growing seasons, while offering an abundance of otter pelts along the immediate coast. At its peak, the installation, with up to two dozen dwellings, forged some trade agreements with the nascent village of Yerba Buena to the south (today known as “San Francisco”). Fort Ross also spurred cross-cultural interaction between Russians (with hired Alaska natives) and the indigenous Kashia Pomo people living nearby. However, as trappers depleted the otter population, Fort Ross—never a profitable entity for the Russian-American enterprise—became too much of a management burden, so the company sold the land to American interests, under which the physical structures largely faced neglect. A state-run historic landmarks commission purchased the property in 1903, but it was only the San Francisco earthquake of 1906 that triggered serious preservation initiatives, after many structures suffered irreparable damage from the tremors.

I was unable to visit Fort Ross State Historic Park; during the winter season its hours are very limited. But this superficial research revealed the extensive array of initiatives and activities intended commemorate this unusual and largely overlooked locus of cultural collision. Only one structure—the house of the final commandant Aleksandr Rotchev—survives from the Russian period, but the California Historical Landmarks Commission and the Fort Ross Conservancy have reconstructed a variety of other buildings at the site along State Route 1, including the Holy Trinity St. Nicholas Chapel with its double spires featuring the Russian Orthodox cross. Beyond an inconspicuous historical place marker (which I clearly didn’t see during my travels), Fort Ross does not promote itself—which may serve the preservationists’ purpose of restoring without cheapening the site, now a National Historic Landmark. During favorable weather, Fort Ross serves as an attraction—a living history museum and host for commemorative festivals—but it’s such a quiet and obscure one that it does not receive many impromptu visitors, a predicament that nearly resulted in its closure during extensive state budget cuts of 2009 induced by the Great Recession. An appeal from the Russian government was insufficient. Reduced operating hours and staffing ultimately saved Fort Ross and up to 100 other California State Parks, though these diminished operating times only reinforce the notion that Fort Ross is an intentional visit—not something one might stumble across while traveling along the Pacific Coast Highway (like I did).

The Russian Orthodox cross is the closest I could find to a signal—a cue that something unusual lies behind those gates. I’m sure Fort Ross is worthy of a longer visit: the combination of a colonial settlement with breathtaking views should be an enticement. But the treacherous two-lane highway is at least twenty miles (nearly 45 minutes) from Bodega Bay, the only community of any size nearby. Hopefully the Russophiles will continue to make the journey—if the breathtaking natural setting doesn’t vie for their attention, and win.

PrevSteering with stanchions: keeping the corners safe in the Christmas City.
Small town retail: is the outlook any better than the cities?Next

4 thoughts on “Fort Ross: challenging the orthodoxy on the California coast.”