A subscription to Dirt.

Over the last few months, I’ve received a growing number of requests to improve the access to my site—for me to let people know when a new article is coming out. I recognize that I am pretty reticent on social media, so it’s not always obvious how to tap into my articles, which typically come with numbing predictability of five posts a month. But where they fall within a month varies greatly.

So how to reach me? A few people have discovered that I do keep a Facebook page for American Dirt, which I update almost exclusively when there’s a new post. 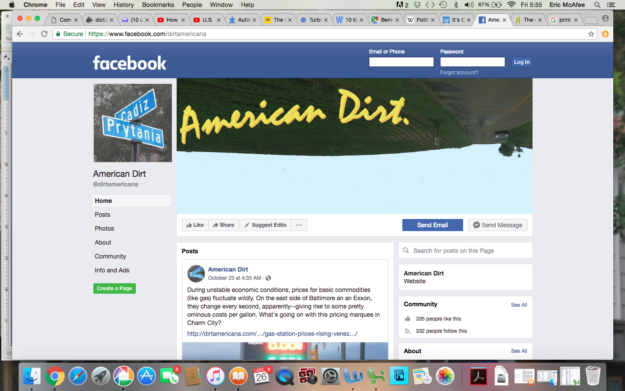 Like this blog itself, I make no real effort to promote it, so it gets buried pretty far amidst the search engines. But it’s there, and by liking or following the page, you’ll receive notification whenever there’s a new post…but rarely more often than that. Now and then I’ll post a photo montage for something that I may eventually convert to a blog article, but that’s rare.

For those who don’t Facebook, I’ve decided to start a mailing list. Feel free to mail me at dirtamericana@gmail.com and I will send a confidential (bcc:) e-mail announcing the release of any new blog articles, much akin to the Facebook followers. Though it’s possible I’ll eventually convert this into a something like a Mailchimp subscription, that seems like a lot of work for every single blog post, so, if it happens, it’ll turn into more like a monthly occurrence.

Back when my blog was still published through Google Blogger, I had RSS feed, which I eliminated since it isn’t all that popular these days, but it’s another good alternative for those who aren’t followers through other social media. Since I’ve been with WordPress the last few years, I have opted out of integrating RSS into my design, but I’m also overdue for a refresh on my blog’s appearance, so I that might change in the future. I also might consider migrating some of my photos to Instagram for subscription purposes, though I can’t say I’ve really taken to the site all that much so far.

I do not use Twitter, never have, and never will.

At any rate, these alternatives still offer some other means of accessing my content conveniently, and, the next time I spruce up the appearance to my site, I’ll add some icons. Regardless, feel free to mail me at the address above, or keep the comments coming. For what it’s worth, Facebook rates me as “Very responsive to messages”—so there’s always that! I appreciate people’s thoughts and ideas; they keep the blog going!

PrevGas station dysfunction: prices rising even faster than Venezuela.
Steering with stanchions: keeping the corners safe in the Christmas City.Next

6 thoughts on “A subscription to Dirt.”