It may seem a little excessive to devote a second article to a town as obscure Bowman, North Dakota, but since it’s one of only two incorporated municipalities I’ve visited in the state, it’s only natural I was impelled to look a bit more closely than I otherwise might. The last time it brought me face-to-face with a geodesic dome on an otherwise nondescript residential street. And—lo and behold—it proves that Bowman is just as good of a place as any to study one particular phenomenon: the encroachment of automobile-centered living onto a small town’s built environment.

As one might expect from one of the most sparsely populated portions of the lower 48 states, Bowman is the seat of its namesake county—approximately the same size as Rhode Island. The county and its primary town have experienced their ups and downs in terms of population, which is largely in keeping with North Dakota as a whole, one of only two states that does not seem to face a general trajectory of population growth; West Virginia is the other. The county peaked before the Great Depression with 5,110 people, but—as is typical of the surges during the Roaring Twenties, the growth was very short lived. At 3,200 people, Bowman County is about 25% off from more recent peak in 1980, while the town (slightly more than half the county’s population) has broadly hovered at the same population since a growth spurt in the 1950s.

Bowman is too far south from the Bakken Formation to capitalize on the shale oil boom that has caused the state’s population to spike in the first half of this decade. The fact that the population has remained stable amidst the broader losses throughout most of the Great Plains suggests that Bowman boasts a certain diversity of economic activity relative to its isolated location that keeps it humming along. (The same can’t be said about the next municipality to the west: the City of Rhame, which has dipped from 340 people in 1950 to about half that size in 2010.) 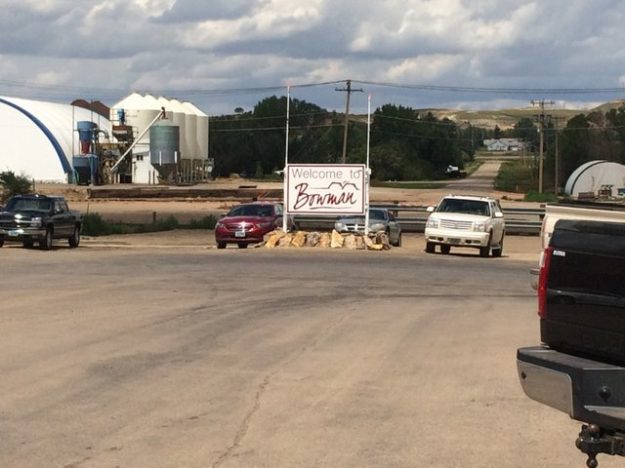 Bowman’s Main Street shares the unpretentious austerity common to many prairie towns, at least judging from my experience in this part of the country. 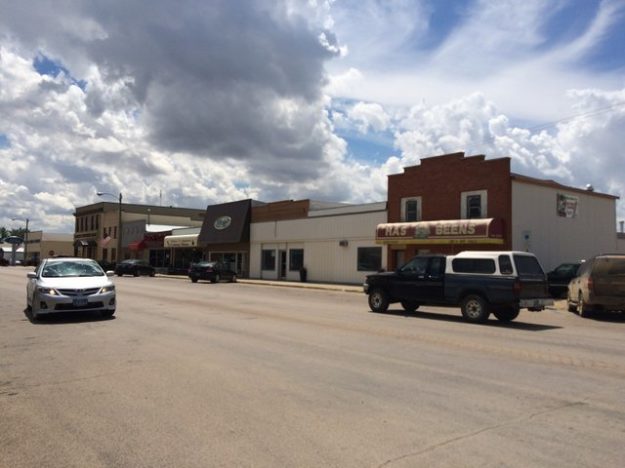 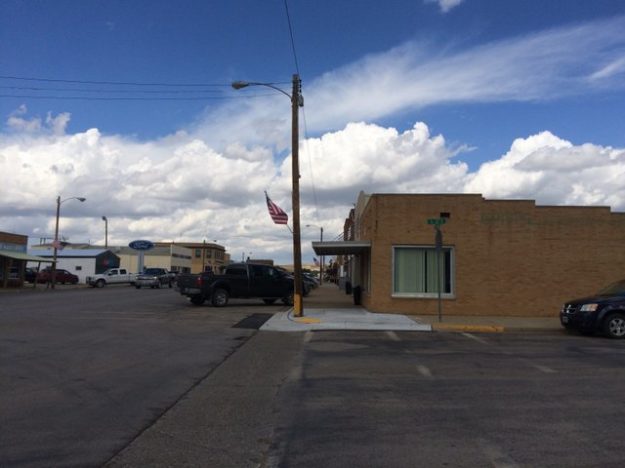 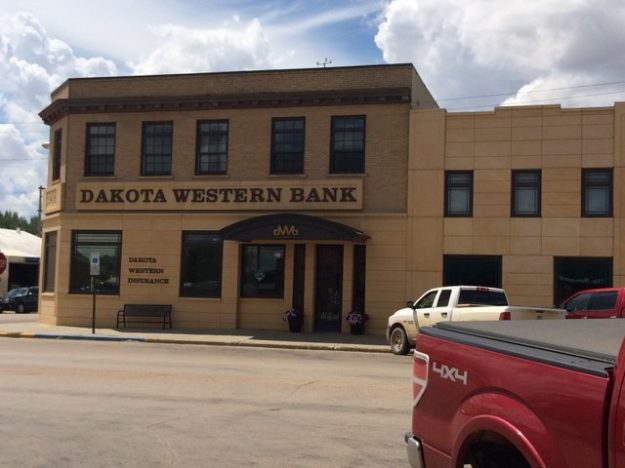 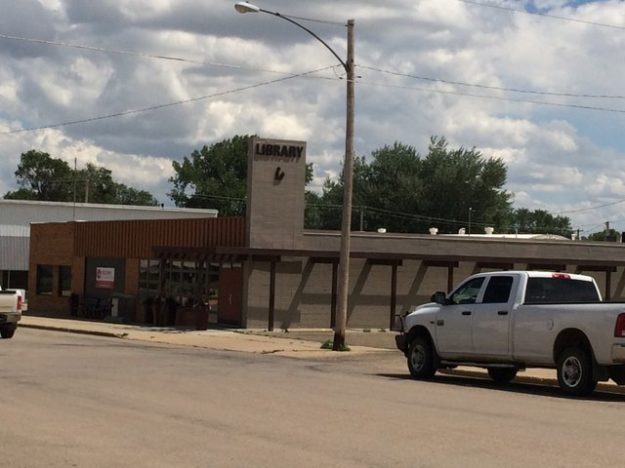 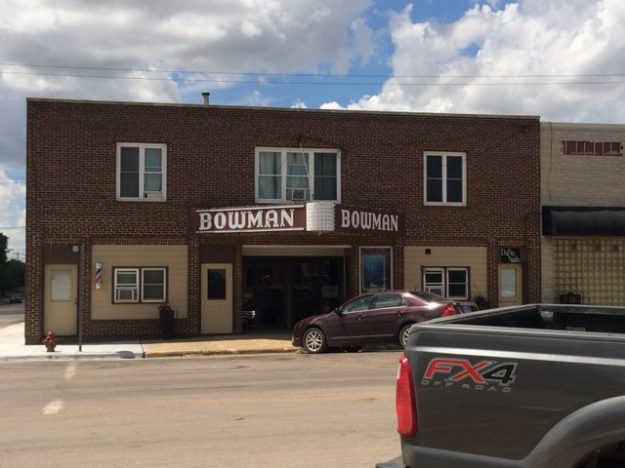 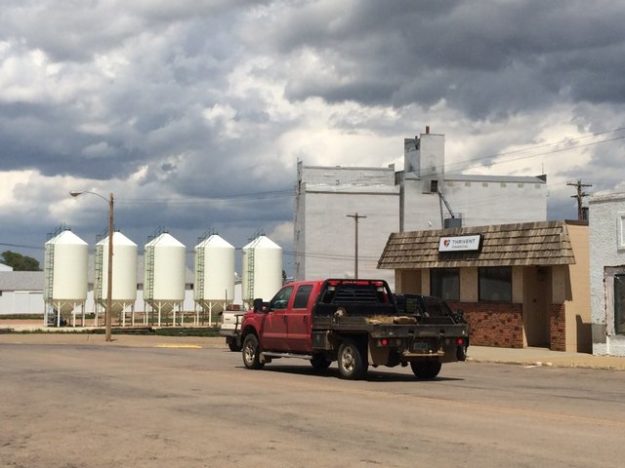 Not a lot of greenery, but this is the prairie. Most the residential areas of Bowman have their share of trees, but thick foliage is not the natural state of the ecosystem in general. Street trees rarely thrive in heavily impervious areas; the parched landscape of North Dakota no doubt adds to the challenge. Beyond this notable absence, the condition of the streetscape and the buildings along Main Street is impeccable.

But I noticed one uncharacteristically prevalent land use. 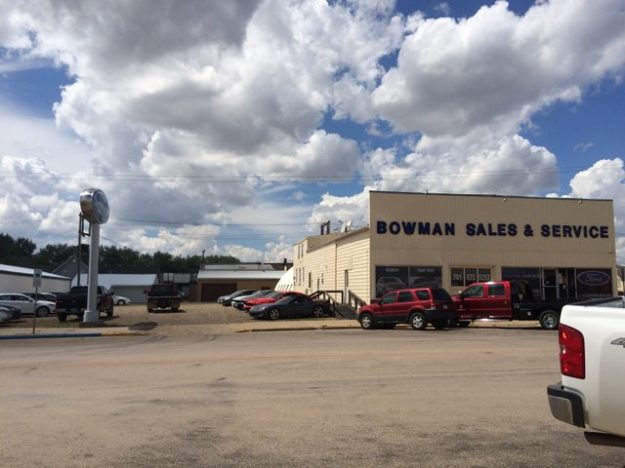 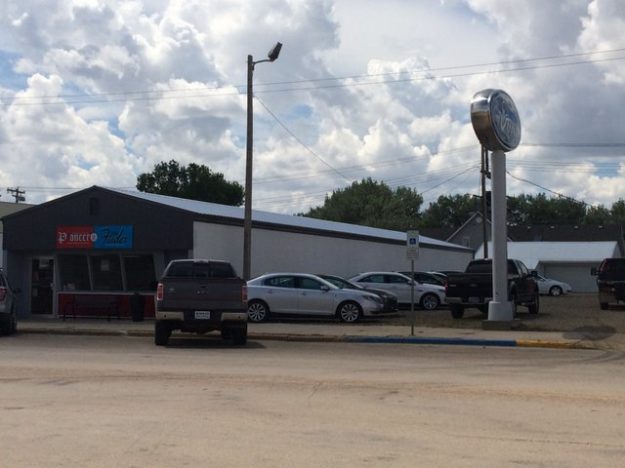 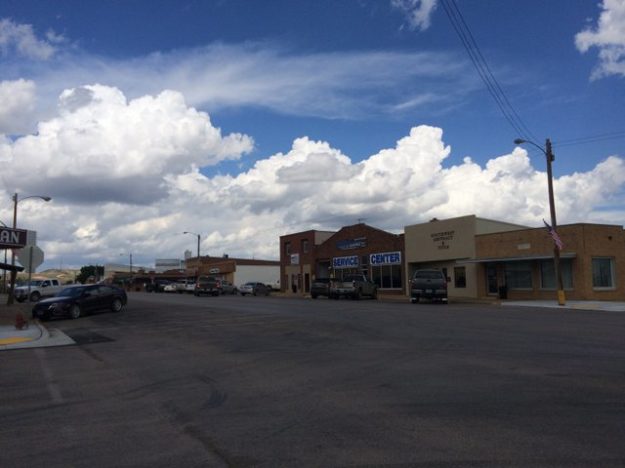 Do you see it? For a main street that consists of two-and-a-half blocks, an unusually large number of the buildings seem customized for automotive retail, either directly selling cars or car accessories. It’s particularly noticeable in the photo below: 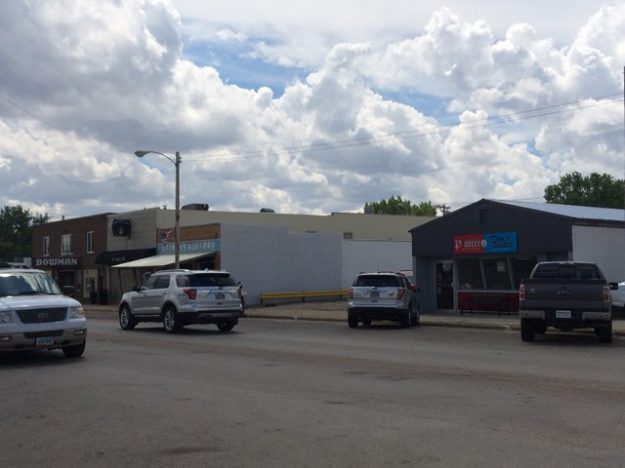 A Ford dealership on a main street. To a town founded in 1907. A town centered around a railroad stop, that quickly grew to several hundred before vehicular ownership became widespread. Even some of the more conventionally human-scaled buildings seem to accommodate the car to a disproportionate degree, like the building in the left and center in the photo below. 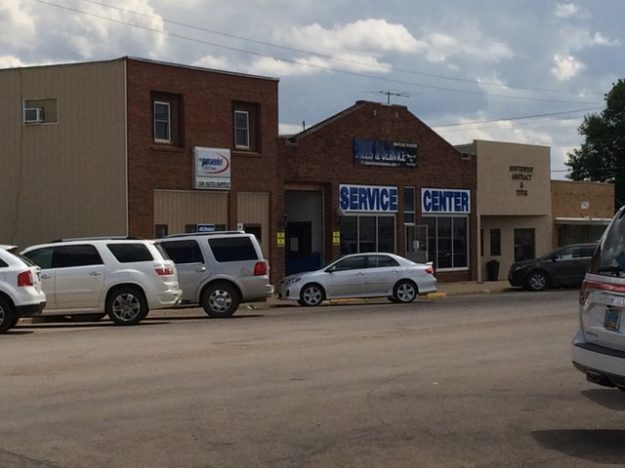 And this street section, charming enough with its gabled awnings, terminates with a Firestone store. 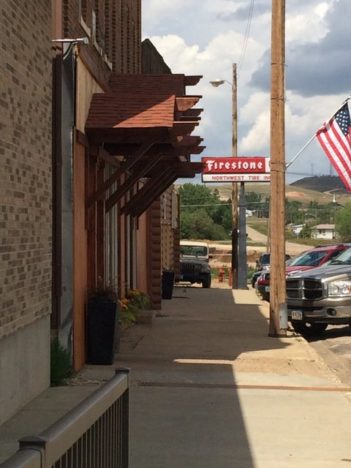 In short, Bowman’s main street has almost completely re-oriented itself to cars, even though many of the surviving buildings still directly abut the sidewalk (with no setbacks), and the compact town of 1.5 square miles is fundamentally walkable. But the presence of so many auto-related shops results in a disproportionate number of curb cuts, of off-street parking lots, of gaps in the traditional streetscape. It’s all the more surprising considering that U.S. 85 (Theodore Roosevelt Expressway) bisects the town a block to the east, so Bowman’s Main Street isn’t even an arterial or the north-south spine. U.S. 85 is, in fact, a bit more residential than Main Street—but not without its extension of car-centered uses to complement the main street. 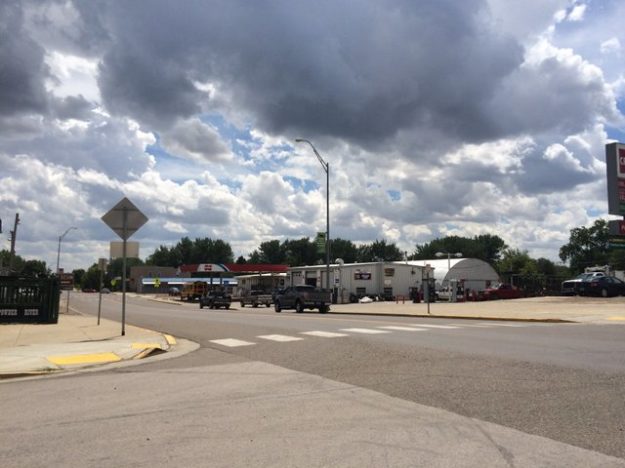 And here’s an interesting condition: another car dealer where the primary structure fronts Main Street, but the vehicles on display sit out back—along U.S. 85. 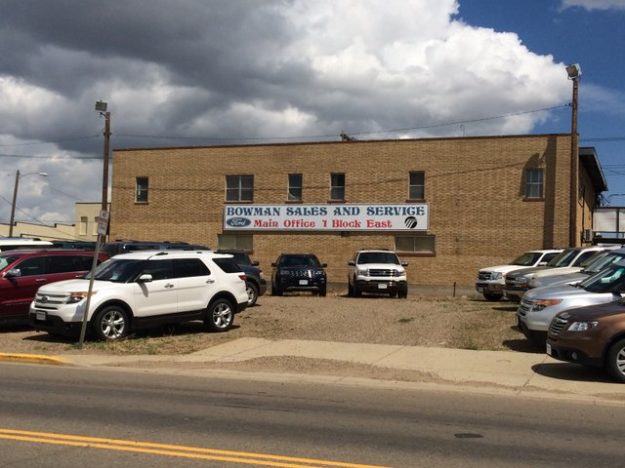 And right next all those parked cars is a nicely kept, upper-income home. 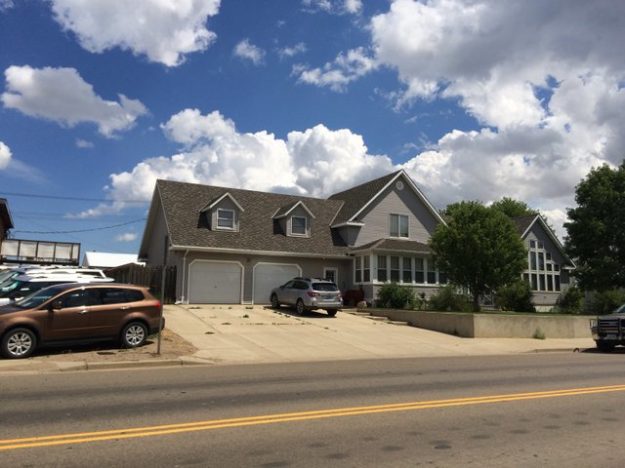 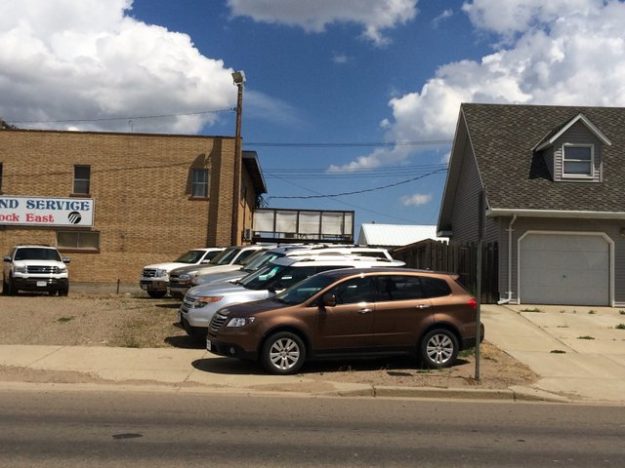 It’s a bit surprising to see such a juxtaposition, but land use regulations are rarely stringent in small towns. Few people are likely to make much of a fuss if a commercial corner gets transformed into an unsightly and potentially noisy auto lot.

Bowman also claims an east-west arterial: U.S. 12, which forms the southern perimeter to the small city. 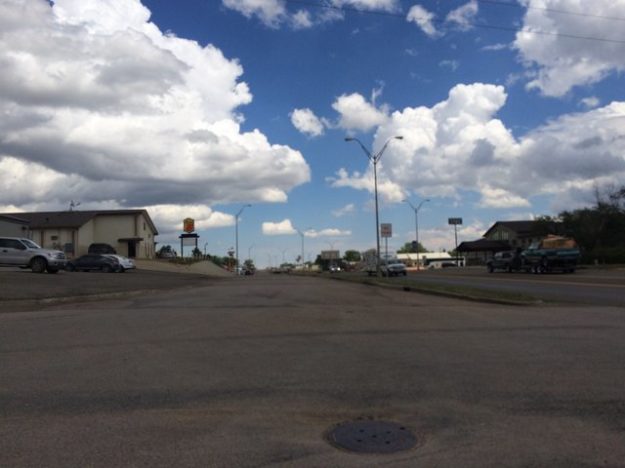 This highway features the more conventional amenities that might cater to motorists cutting across the expansive prairie: at least a half-dozen hotels, more gas stations, a convenience store, a few restaurants (including the ubiquitous Subway). The numerous hotels aren’t surprising; it’s the only town with any real concentration of services for at least 20 miles in either direction. U.S. 12 also features the closest Bowman can claim to big-box retailers that need big (or biggish) parking lots and large (or largish) parcels of land: a hardware store, a liquor store, a supermarket, and a farm equipment retailer.

But why wouldn’t the auto dealers and accessory suppliers want to locate out on the highway, where all the passers-by might see them?   Why locate on a main street tucked away into a town’s low-profile grid? My only answer is that, as auto-dependent as most of America is, the sparse (and mostly depopulating) counties of the Great Plains take auto-dependency to an almost inconceivable extreme. The county just south of Bowman County—Harding County, South Dakota—has a density of less than one person per square mile. Bowman County’s density is 2.7. While individuals throughout rural America depend on their cars, they are far more likely to be able to accomplish a day or week’s task within a 15-mile radius, as might be the case in rural Indiana or Illinois. In the Dakotas, that routinely navigable space is more likely to stretch to a 50-mile radius—or more. Leaving Pierre, SD and heading westward, public signage indicates the distance to the next basic services (usually a gas station) and sometimes it is 40, 50 or even 75 miles. Speed limits on most highways are 70 miles per hour; in North Dakota the interstates are 75; in South Dakota, for the most part, they’re 80. It would come as no surprise if the average person in Bowman accrues 40 or 50,000 miles on his or her vehicle in a single year.

Bearing this in mind, southwest North Dakota shares a degree of auto-dependency typical of rural America (typical of most of America, actually). But it has a much higher rate vehicle miles traveled, of engine use, and of overall wear-and-tear to the vehicles. While this doesn’t necessarily explain why so many auto shops are located in Bowman’s main street, it’s possible that the business owners simply get good enough business and—since most main streets aren’t flourishing—the central business districts offer cheaper real estate than the high-profile land out along the main highway. The lower cost to land in Bowman’s downtown is part of the overall strategy. It’s common for nationally known auto-supply chains like AutoZone or O’Reilly to choose cheaper land on middling collector roads, sometimes even in lower-income or even somewhat unsafe parts of town. What we see in Bowman may be that same rationale translated among local entrepreneurs. It doesn’t result in a very stimulating streetscape: auto lots and detailers are hardly likely to bring the throngs of visitors to Bowman Main Street. But the hotels on U.S. 12 capture Bowman’s passers-by, as few as they may be (North Dakota is nearly always ranked among the least visited states in the country). And what would a town prefer as a baseline for building its reputation: a place to rest your head, or a place where your car breaks down?

PrevMainline Protestant churches in small-town America: it’s time for a few more disciples.
Joint Base AT&T: brutally fortifying our downtown, in preparation for the past.Next