Steering with stanchions: keeping the corners safe in the Christmas City.

For those of us who care about this sort of thing (the precious few), it’s become increasingly obvious that bollards have become a significant element of the average streetscape. We owe some of this, no doubt, to the unfortunate reality of an escalating collective fear of terrorist attacks in the form of vehicle ramming, either into areas frequented by pedestrians or directly into buildings themselves. But sometimes the bollards are a bit more innocuous, like these at intersection in Bethlehem, Pennsylvania: 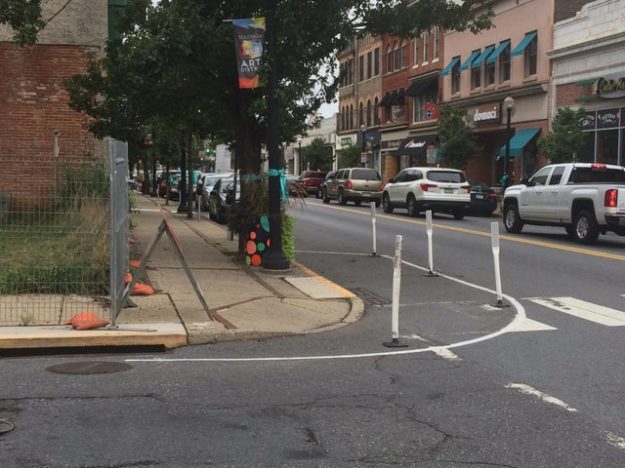 And it’s at this early point in the article that I need to offer a clarification—more like a correction. They aren’t really bollards, since bollards are generally ponderous, immobile things, whose size intends to impede vehicles entering forbidden territory. These skimpy little white poles are stanchions, appropriating the extremely versatile word for just about any post used as a support and typically oriented upright. And these poles, while visible and at least mildly inhibitory, will hardly stop an aggressive or careless driver. They just might cause a scratch to the body of the car, and, at best, they could damage a side mirror. But they’re not going to protect a hapless pedestrian from a vehicle that edges onto a corner sidewalk. So why are they there?

It appears that the City of Bethlehem’s public works department has attempted to achieve something akin to a similar initiative I recorded a few years back in Hoboken, New Jersey (also available on Huffington Post): it’s a simplified effort to improve the safety for pedestrians by giving them more space to maneuver at a crossing. The broadly used term is a “bulb-out”, where the act of shrinking the street width at an intersection creates a smaller crosswalk for pedestrians, thereby reducing the potential for vehicle/pedestrian conflicts. (It has the added benefit of restricting on-street parking on the stretch of curb closest to the absolute corner, which can impede visibility for pedestrians and right-turning vehicles.) A literal bulb-out would involve heavy surgery on the street, expanding the the curb, thereby seriously reducing these conflicts because most vehicles are unlikely to jump a curb; the grade change unambiguously distinguishes the street from the sidewalk. Such an intervention more overtly resembles a bigger bulb shape to the sidewalk—hence the name. The alternative with stripes and stanchions, used in Hoboken and here in Bethlehem, achieves largely the same results, with one drawback (it’s not as preventative as a transposition of the curb) and two advantages (the stanchions have reflective tape on the upper tips, and the end result is much, much cheaper than laying a new sidewalk).

In most respects, this Bethlehem example replicates the Hoboken approach, which affords it little real interest. But there’s one distinction: Hoboken used far more powerful striping and even a different paving material (asphalt for the road and a concrete sheath for the newly protected bulb-out portion, but with no real change in the actual curb). Bethlehem goes even simpler. It’s just a stripe and a few of those flimsy stanchions. Nothing elaborate, but it still gets the point across. And, compared to repaving, it costs next to nothing.

I’m sure this bulb-out is still somewhat effective at creating a larger pedestrian refuge at the crosswalk, but I’m not sure it’s exactly what the Bethlehem example is all about. Take a look at this photo from a different angle and it’s clearer. 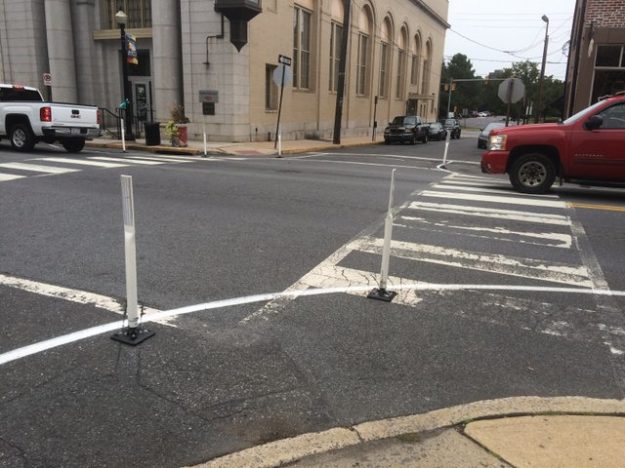 The white stripe and the stanchions carve out a buffer or an offset of the curb (the “bulb”), increasing the circumference of the arc at that intersection and significantly expanding the turning radius. As a result, motorists must slow down much more profoundly when turning at this intersection than they did under the smaller radius. Reduced speed at right turns helps mitigate vehicle/pedestrian collisions—a condition inevitably widely valued, as South Bethlehem seeks more pedestrian activity in its central business core. But the choice of investment here—an abundance of stanchions—indicates that Bethlehem’s safety measures are a more powerful cue to motorists, whereas the pavement-oriented approach in Hoboken yields a stronger visual impact to pedestrians. This should come as no surprise, since Hoboken is, by almost all metrics, a more pedestrian friendly environment (with no disrespect intended toward Bethlehem’s walkability.) Bethlehem’s stripe-and-stanchion combo may not be enough to prevent a motorist with malicious intent, but it’s a cheaper means of forcing the merely careless driver on the straight and narrow…exactly how they should be moving through a growing urban center.

PrevA subscription to Dirt.
Fort Ross: challenging the orthodoxy on the California coast.Next

18 thoughts on “Steering with stanchions: keeping the corners safe in the Christmas City.”