The borough of Waynesboro, Pennsylvania, just a few miles north of the Mason-Dixon line, isn’t a hotbed of economic activity, and it’s not receiving a surge of new arrivals. But as minor cities in Pennsylvania go, it could be in a lot worse shape. Unlike the vast majority of municipalities in the Keystone State, it has about the same population it did in 1930; in fact, most estimates suggest it might be a bit larger. (The borough dipped below 10,000 people during the 1960-1990 doldrums, but it has recovered all of its population since then.)

Compared to most other communities in central PA, Waynesboro is stable. Pennsylvania, like many other northeastern states (and unlike most of the rest of the country), is 100% incorporated. If you’re not living in a city in Pennsylvania, you’re in either a borough or a township. Every square mile of the county that encompasses Waynesboro belongs to some local government; there’s no unincorporated Franklin County. This characteristic has prevented municipalities in Pennsylvania from annexing since a constitutional amendment in the middle of the 20th century. So while shrinking cities throughout the South and Midwest have expanded their boundaries to recover population (and a tax base), Pennsylvania communities are stuck. Thus, the fact that Waynesboro is growing again is a very good sign: it indicates that people are coming back. My only guess is that, despite its isolated appearance, Waynesboro sits about equidistant from two important metros: Harrisburg (Pennsylvania’s bigger-than-you-think-it-should-be capital) and Baltimore. Additionally, the nation’s capital isn’t that much further, and it’s more of a direct path down I-70. Therefore, people are coming to Waynesboro because it rests within the orbit of bigger cities, while comfortably dodging the exorbitant housing prices associated particularly with Washington DC.

It’s a pleasant looking town with a main street characteristically well-preserved as Pennsylvania towns go. Not vibrant, but hardly moribund, and much of the century-old architecture remains fully intact, as this street scene suggests. Nonetheless, on the heart of Main Street, just a few blocks from the absolute center of Waynesboro, the visitor will encounter this eyesore. 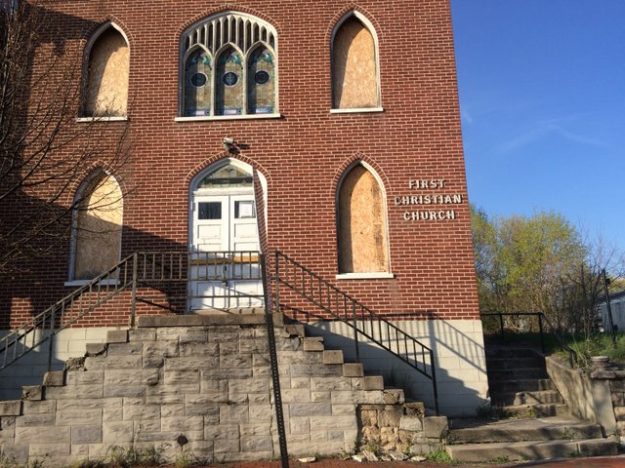 It’s not closed for renovation. The First Christian Church of Waynesboro hasn’t been such a dolorous sight for all that long though. A Google Street View image from the summer of 2012 reveals the fully exposed stained glass windows, suggesting the building’s owners hadn’t yet mothballed the structure. But wait—couldn’t it have been fully operational six years ago? Perhaps, but I suspect it was already closed; take a look at the small placard just to the right of structure, where a church would normally list its pastor and the times for the Sunday services. Blank. Only if we dig back further—to the summer of 2008 (the oldest Street View image)—does First Christian Church show signs of hosting an active congregation. So it has clearly deteriorated over the decade. 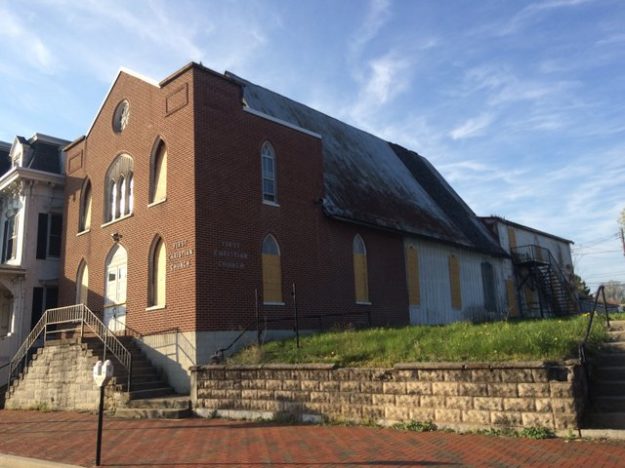 The residential structure just to the right of First Christian Church is gone. Nothing more than a vacant lot. And the church itself looks considerably more weathered. Comparing this site to ten years ago, it’s now a clear blight to Waynesboro’s otherwise largely intact historic main street. So what happened? Well, it’s obvious the church closed, probably at least six or seven years ago. And my suspicion is the adjacent house was a parsonage, or a rectory, or whatever they call it—the home where the pastor and his or her family lived. And it vacated at the same time as the church, then burned to the ground, quite likely through arson. The fire didn’t spread so easily from the wooden home to the church of masonry, and a mothballed structure remains.

The type of church might also offer a clue. With a name as seemingly generic as “First Christian Church”, it could have belonged to any larger affiliation, but I’d wager that it was The Christian Church (Disciples of Christ), one of the country’s oldest, largest, and most established Mainline Protestant denominations. As I’ve written about multiple times in the past, the Mainline Protestant church denominations—which include the Episcopal Church of the USA, Presbyterian Church (USA), Evangelical Lutheran Church of America, and Disciples of Christ, among others—have long been instrumental in the dissemination of religious and cultural mores throughout the country. The vast majority of U.S. Presidents have belonged to Mainline Protestant denominations. I explored these churches in great detail on an article in The Episcopal Café a few years ago, but to sum it up briefly: today the majority of them are characterized by a European counterpart from which they’ve evolved. Many of them date from the colonial period; all are at least 150 years old. (Among the largest Mainline Protestant denominations, Disciples of Christ is the one true exception, having purely American roots.)  The congregations typically have above average incomes and educational attainment, are slightly older than the national median, employ a traditional and liturgical approach to weekly services, and they embrace a theology that is generally politically liberal or even leftist.

Additionally, virtually every one of the Mainline Protestant denominations shares an unfortunate characteristic: they’re shrinking. Most of them achieved their peak in membership and influence in the 1950s, and as the more youthful and mission-driven Evangelical churches have expanded in popularity, Mainline churches have flagged. Churches like Disciples of Christ (to which I’m almost certain First Christian Church in Waynesboro belonged) have suffered from low birthrates and an inability to retain younger members up to adulthood, many of whom either migrate to a non-denominational alternative or leave the faith altogether. Additionally, these Mainline Protestant churches often remain located in aging structures in old parts of town; their charming but creaky buildings are expensive to maintain. It’s possible that the First Christian Church featured here still exists in some other form, having moved to a smaller, newer building, or operating out of a person’s living room. But the future for the old church is bleak.

In larger cities with more active downtowns, vacant Mainline Protestant churches have proven lucrative real estate for the conversion into multifamily residential buildings. Many years ago, I featured a conversion in my home city of Indianapolis (also the headquarters of Disciples of Christ, incidentally) of an old United Methodist Church into condominiums. It’s a fitting use for a charming old building, but a town the size of Waynesboro does not yet boast the same demand for multifamily residential. Many of the people who have moved to this remote location specifically sought a place like Waynesboro because of the availability of lower-cost detached or semidetached housing—not to live in the apartments that are so ubiquitous throughout metro Washington DC. That said, if Waynesboro’s main street remains active and aesthetic, and the urban-minded population from neighboring cities keeps immigrating to this rural outpost, the demand may eventually escalate so that a developer could reasonably repurpose the old First Christian Church. The country as a whole certainly is facing an rising number of dying old church buildings, typically in reviving old walkable, urban settings. Many of them will face the wrecking ball. Waynesboro’s prominent old chapel may suffer the same, but it does have one other selling point for a developer: that vacant lot next door could at least serve the new residents as a parking lot. Sigh.

PrevFast-casual dining advances on suburbia: is it the end of the era of Applebee’s?
The storefronts of Bowman, North Dakota’s main street: perfect for windshield shopping.Next