Rensselaer rehabilitated: a promise of preservation in the unlikeliest of places.

In an older part of town at the center of the industrial heartland, it’s no surprise when we stumble upon an aging eyesore of a commercial building. 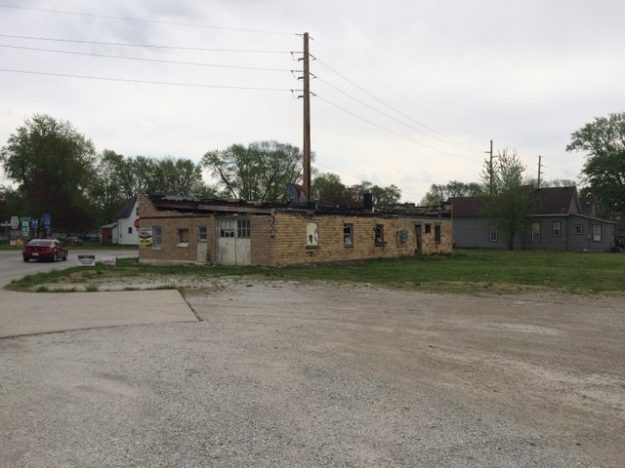 It’s hard to imagine this brittle old man has been put to work at all in the last quarter century. Not only does he appear to be missing a roof, but, judging from the side facing the main street—the left end of the building—it might have even been two stories at one time. (Or, at the very least, it had older cornice work that has since collapsed along with the roof.) The general surroundings are exactly what one might expect. 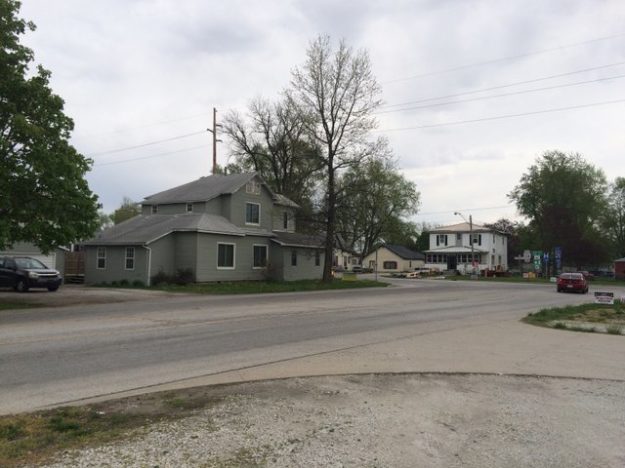 The town: Rensselaer, Indiana, about ninety miles southeast of Chicago, with a population just shy of 6,000. It’s the seat of Jasper County, which I previously featured several years ago through the neighboring town of DeMotte (also in Jasper County), an atypical Dutch agrarian settlement barely outside the reach of Chicagoland.

Rensselaer, like DeMotte, doesn’t exactly wear its heritage boldly on its sleeve, and the town’s website isn’t giving away any secrets. I initially was going to use the phrase “Rust Belt” in my opening sentence, but I recognized that it generally has accrued the connotation of an epithet, and it didn’t seem to apply to this part of the Hoosier State. Unlike much of the Rust Belt, neither DeMotte nor Rensselaer are steeped in post-industrial malaise. Maybe there’s something to this region that explains why—even in a part of Indiana where the population has generally remained static, if not on the decline—Jasper County and Rensselaer are still growing. But if there is something, the people of Rensselaer sure ain’t telling. By Indiana’s standards, it’s a moderately old town, founded 175 years ago by a settler whose last name shares the Dutch heritage prevalent in DeMotte, though I couldn’t find much evidence that Rensselaer is replete with Dutch last names like DeMotte is. (I also could find no evidence that the town’s name has any ties to the Rensselaer Polytechnic Institute, despite the Indiana town’s founder coming from the same part of Upstate New York as the well-regarded engineering school.)

Having driven through Rensselaer a handful of times over the years, it seems to be trotting along reasonably well: not flourishing, but hardly languishing after closure of the main industry (a characteristic common to many northern Indiana towns). It has at least five major structures listed on the National Register of Historic Places, which seems like a higher number than average for a town this size, but it’s unclear to me if the town’s economic development team has been able to harness its heritage toward any sort of great revitalization of the town’s oldest quarters. Furthermore, the Rensselaer suffered a significant drawback last year with the “temporary suspension of operations” of St. Joseph’s College, by far the largest institution in the area—and a subject worthy of a later blog post.

But maybe, despite the loss of a major student presence in Rensselaer, this eyesore commercial building is an indicator of things to come 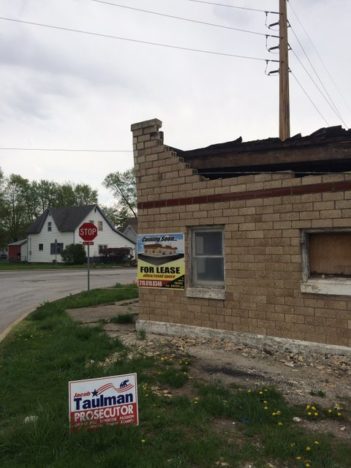 Yes, that’s a “For Lease” sign on the corner. Someone is investing in this property, and, from the looks of things, he or she isn’t merely tearing the old man down. But whoever intends to rehabilitate this structure has a real challenge ahead. 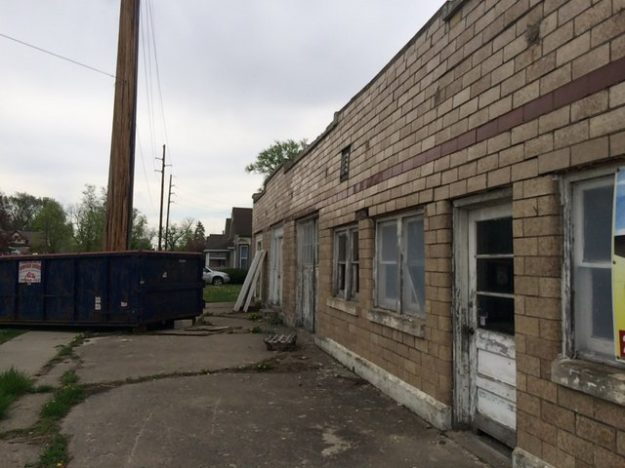 The façade is hardly of enduring architectural interest, but let’s face it: the place is old, and in 2018, old may be good enough. And it can fit within the broadly walkable context of the old town, since it’s just about five blocks north of the Jasper County Court House. I have my suspicions that it’s not structurally sound, but a good engineer and preservation team can find a way to salvage just about anything—certainly the well-situated façade.

So, what is the future of this otherwise neglected obtuse corner in Rensselaer? 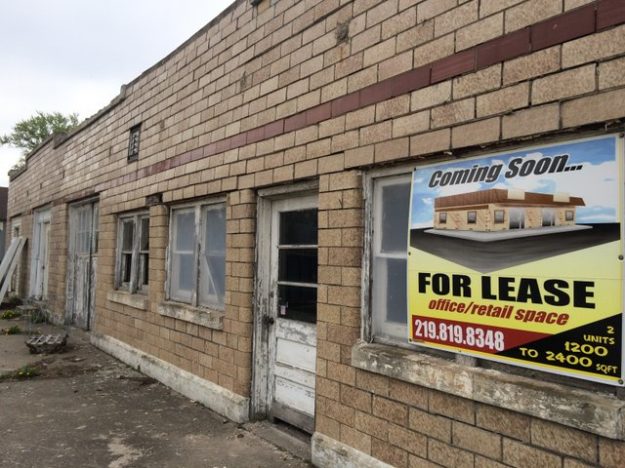 The rendering on the promotional sign is ambiguous: it seems to capture the general massing of the old building featured, but the window and door treatment looks different than the reality on site. Perhaps, ultimately, the developer intends simply to tear the whole thing down and build a bland corner convenience store. But if that were the case, why make such a big presentation of placing the signage on the building itself? Why not just do what most speculators would in this instance: tear down the old building itself and place a freestanding sign emphasizing the value of the real estate?

Ten years ago, I almost certainly would have assumed that a developer would—and probably should—take the more predictable path and demolish this eyesore. But the public’s curiosity (or even fascination) for old buildings has escalated over the years, to the point that the structure needn’t boast great architectural features or a key historical reference. Old is enough. It wouldn’t surprise me at all if some nascent entrepreneur sees this aging structure as a great site for some sort of craft brewery or distillery. By 2018, the repurposing of old commercial/industrial buildings into microbreweries has turned into a sort of cliché. And for those who dismiss the idea that this sort of transformation could take place in a city as small and seemingly unremarkable as Rensselaer, I point you no further than Brookston, Indiana (pop. 1200), not so far to the south of Rensselaer, where I blogged about the encroachment of microbreweries into a revitalizing three-block main street.

I have no idea what exactly will happen to this corner in Rensselaer, and I’m not hopeful that I’ll be back any time soon to do a follow-up. But the very prospect of this sort of preservation initiative—and a developer who seems to be aware of this prospect—speaks volumes. You don’t need urban hipsters to bring downtrodden areas back to life; big, open, undervalued real estate is all it takes. And if it gets packaged in a boxy building layered with the dust of history, that’s even better.

PrevLigon Mill Road: the visual blight of bad streetlight height.
At the ballpark, a patch of the outfield gets left unmowed.Next