A railing on a sidewalk may seem like a humble installation, in the context of the vast strip mall that surrounds it. And it is. 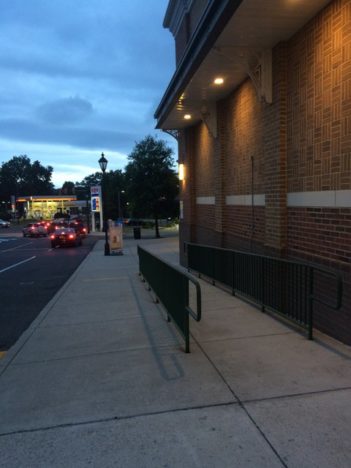 But it does seem odd, almost random, based on the environment. Why does this twelve-foot stretch of sidewalk need two railings when nothing around it has them? A view from the other angle might help clarify. 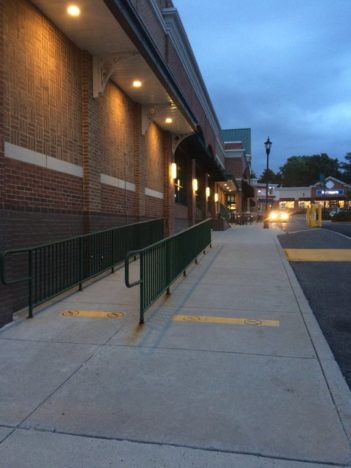 It becomes clear that this segment of sidewalk runs on a slope, subtle as it may be. And while it’s not likely that the average patron of The Shoppes of Foxchase in suburban Alexandria, Virginia would notice an incline this slight, it’s equally unlikely that the developers would have perceived it as a hazard through the naked eye.

Thus the question arises: how did this segment get railings, and how did they decide? Without diving too deeply into Alexandria’s code, I can only speak from my own experience with municipal development review. These railings almost certainly owe their existence to the design and engineering drawings, superimposed over a topographic map with contour intervals—intervals that revealed this particular portion of the sidewalk exceeded the acceptable grade for compliance with the Americans with Disabilities Act (ADA). And while I’m sure one could find plenty other strip malls in plenty of other municipalities that have sidewalks at this slope or greater—but lack the requisite railings—Alexandria holds its developers’ feet to the fire in terms of code enforcement. (Either that or the high concentration of lawyers in the area ensures that the design and engineering team for The Shoppes of Foxchase would do the utmost to avoid liability.) The result may not be obvious to 99% of the population, but those using wheelchairs to ascend a prohibitively steep slope no doubt appreciate the added leverage that these railings provide. It’s all part of compliance. Notice how, a few dozen feet away, another entrance to one of the shops provides a more conventional handicapped ramp to manage the sudden grade change. 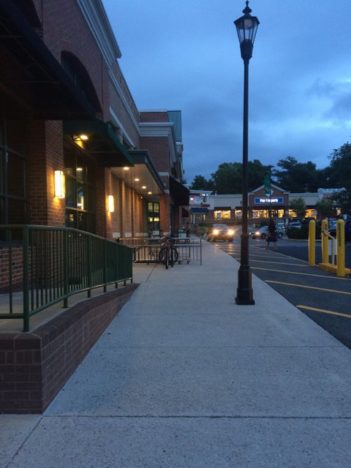 But that’s not all. Returning to the photograph at the foot of the “hill”—

–it’s critical to notice the tiny logo imprinted on the yellow rubber. It indicates an embedded censor that will lock the carts’ wheels if they venture beyond this line, no doubt to prevent the sort of shopping cart theft we’ve all witnessed at less plush shopping centers.

The presence of shopping carts raises an entirely different concern in regards to the layout and design of Foxchase. Notice the parking lot’s configuration, as witnessed from this exact same sidewalk segment. 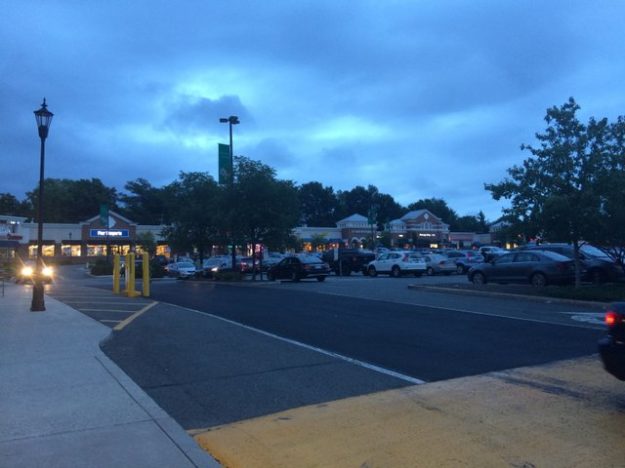 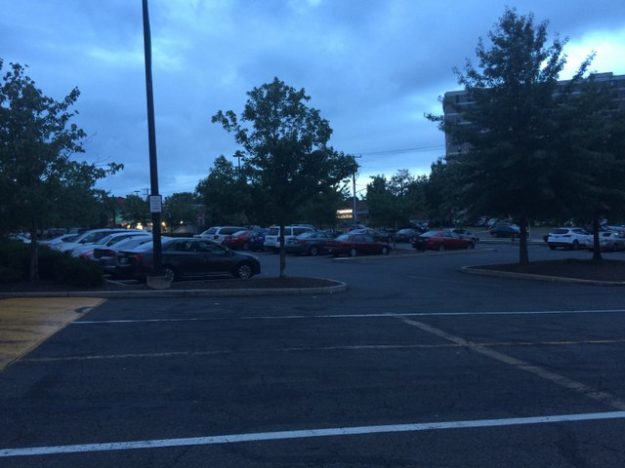 Though it’s not easy to tell, the entire strip mall rests upon a mild slope. Most undeveloped parcels require a high level of grade and fill for them to function as viable, automobile-oriented commercial space. If a strip mall hopes to attract a grocery store or some other anchor tenant that uses shopping carts, the concern for good grading increases exponentially. The same subdivision regulations that planted those railings along the sidewalk required considerable mitigation of the grade change to support such a large parking lot. For anyone who has shopped at a poorly graded strip mall, the reason is obvious: without a reasonably level surface, that shopping cart will likely escape down the slope as soon as we have loaded the first bag into our carts. The Shoppes at Foxchase hosts a Harris Teeter grocery store as its anchor tenant, so carts are abundant.

Inconsequential though these regulations may seem, they reveal the host of concerns that make modern living amenable to as many people as possible: not only those arriving via motorized four wheels, but those using two wheels powered by hand. The incremental improvements of subdivision regulations over the last three decades have turned drab, uncomfortably hot parking lots into clearly demarcated and smartly landscaped arrangements. But it isn’t just about aesthetics (though that’s huge), it’s also recognizing the ecumenical nature of the laws of physics, even when a human-conceived fabrication gets superimposed on top. Along with the safety railings.

13 thoughts on “Well-regulated suburban development: hardly off the rails.”