Carefully thought-out infrastructure—the type we actually notice because it’s so smartly conceived—is a rarity. But why? Sure, we might hold certain examples in high esteem; the Hoover Dam or Brooklyn Bridge are among the first that come to mind. But hundreds of millions of tons of civic infrastructure get dedicated, upgraded, or repaired every year, and it rarely captures the attention of anyone outside of civil/structural engineers or an insular coterie of wonks. (Like the one writing this article.) The obvious answer to that two-word question also comes in two words (or maybe three): it’s infrastructure. Duh. If it’s functioning as it should, we aren’t supposed to notice it.

But there’s more to the fundamental transparency of public works projects, and the Latinate word in “public works” underpins why the built environment generally lacks infrastructural initiatives that catch they eye either for aesthetics or markedly high quality. When the public sector builds it, it’s a common good that injects itself into a milieu dominated by private interests. Since most of what we call “infrastructure” is either a public work or a quasi-public utility, the design and construction of final product does not compete with other infrastructural campaigns to stay in business. Put more simply, if a public works department does a mediocre job of building something, it may erode the trust of its constituents, but the department won’t go out of business; therefore, the department has less of an embedded incentive to excel. Good enough really is, most of the time, good enough. And bad outcomes may cause a few firings, but the City of Mediocrity will plod on. Conversely, a public works initiative that tries too hard—and spends too much for a higher level of aesthetics or functionality than the constituents demand—will also suffer political consequences. But, even if the frivolous investment bankrupts the municipality responsible for financing it, the town isn’t going to disincorporate.

These polarizing outcomes help explain why most infrastructural campaigns merely strive for adequacy. But, once in a blue moon, we see examples of infrastructure that is neither lazy nor indulgent, neither stingy nor profligate. The perfect balance between fiscal responsibility and strategic conception. I blogged a few years ago about a very humble example: a sidewalk project in small-town Oklahoma that used bricks aesthetically without spending too much to create an unnecessary public burden…or a tripping hazard. But that example is the exception and not the norm.

Here in Wake Forest, North Carolina we encounter another street improvement with the noblest of intentions, but the outcome seems questionable. 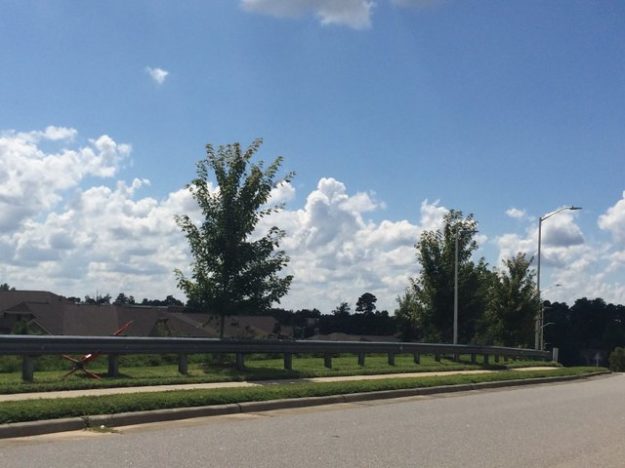 It’s a perfectly ordinary collector street, in this generally middle-class, rapidly growing suburb of Raleigh. But look at those streetlights. 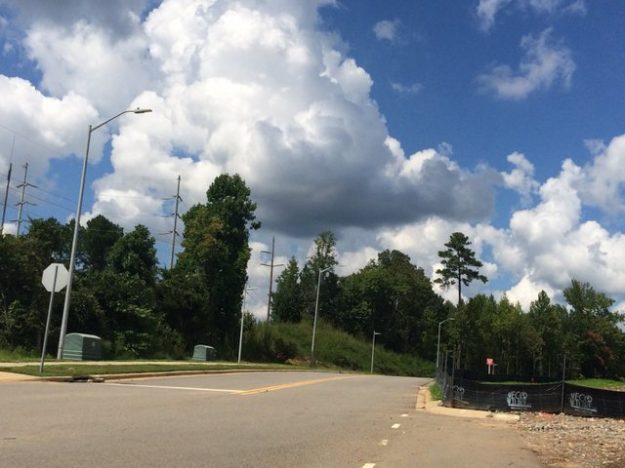 Two different sizes, resulting in an alternating pattern. The question remains: but why? It continues this way throughout the length of Ligon Mill Road and Caveness Farms Avenue, two streets that undoubtedly were little more than country lanes just twenty-five years ago. A quick trip down another (memory) lane through Google Street View suggests that the Town installed both the sidewalk and the streetlights in late 2013 or early 2014, largely in response to the steady growth of multifamily residential along Ligon Mill Road. Makes good sense, except for those bizarre streetlights.

At any rate, I think I understand what the Public Works Department in Wake Forest was trying to achieve: it was attempting to accommodate both vehicles and pedestrians through two separate sources of illumination. I’ve seen this before, where the top portion of a streetlight hosts a stanchion that brightens a much broader array, while, attached at a lower point on that same pole, a separate light source focuses the luminescence onto the sidewalk. A dual strategy. But that’s not what we get here on Ligon Mill Road. Instead, we see two discrete poles. 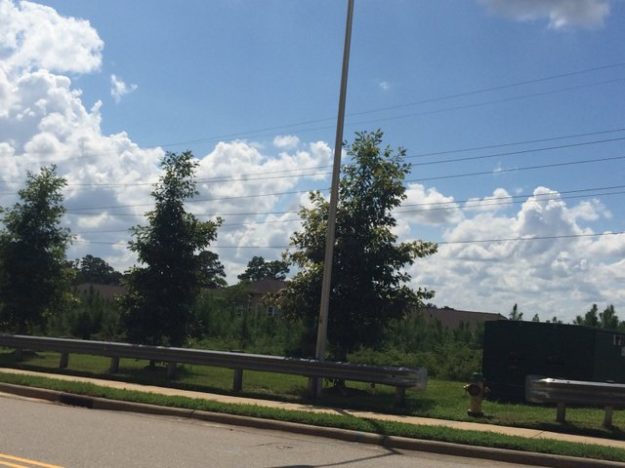 While the pattern features two separate designs, they aren’t distinct enough to appear that way to the unattuned eye. Unless one scrutinizes, it almost looks unintentional, like the Department installed the poles incorrectly. The sloped nature of parts of Ligon Mill exacerbates the condition, because it looks like the shoulder of the street features all variety of streetlight heights. Visual disorder. Not only is it bad from an aesthetic perspective—which doesn’t matter as much—but, unless the two streetlight designs offer radically different illumination types, I fear it could arouse confusion if outright panic among motorists at night, when in use. Arriving rapidly into unfamiliar surroundings, the typical driver expects regularity of visual signals, and any deviation from a particularly simple pattern could cause a driver to respond as though something is wrong. It may actually be safer on a moderately travelled collector like Ligon Mill Road to have streetlights only at the intersections—or none at all—than to have this wildly unusual placement scheme.

Perhaps I’m being overly cautious, since the motorist panic is likely only to last a few seconds. Ultimately, it’s not a particularly busy road, so the odds of an accident remain extremely low. But this streetlight configuration is a perfect example of the best-laid plains going awry. It’s over-thought, yet not carefully thought-out enough. And, if it does create a safety concern where none previously existed, no one is likely to lose a job and the Public Works Department certainly can’t go out of business—meaning the odds are considerably greater that a piece of well-intentioned but misguided infrastructure will find its way onto some other street in Wake Forest, in the not-so-distant future.

PrevWell-regulated suburban development: hardly off the rails.
Rensselaer rehabilitated: a promise of preservation in the unlikeliest of places.Next