Fast-casual dining advances on suburbia: is it the end of the era of Applebee’s?

Amidst the bleak outlook of American retail, the restaurant and hospitality industry has fared pretty well. Sure, in many respects, restaurants are a subcategory within retail, but compared to a clothing boutique or a bookstore, the business model uses different benchmarks for success, a widely different employment structure, and a different means of handling its merchandise, much of which remains an unfinished product when the wholesalers haul it in through the restaurants’ back doors. These considerations help explain in large part why the emergence of online shopping has scarcely put a dent in the restaurant biz, while annihilating traditional bricks-and-mortar retail.

Compared to most other retail, restaurants are booming. And this confers an added social benefit beyond just the wallets of people working in hospitality. The emergence of the restaurant as a prime leisure activity has indisputably helped revitalize old, walkable urban corridors across the country. This trend is visible in cities large and small.

But sometimes it’s the subtler, mostly unheralded transformations that speak most powerfully on the broader cultural shift. Like the average, auto-oriented suburban strip mall. 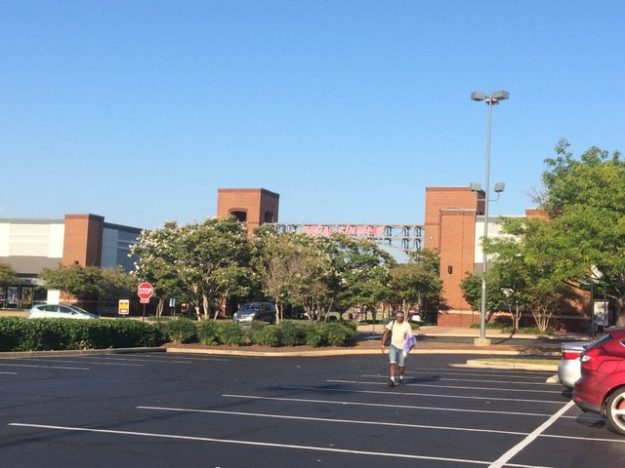 Considering its size, Alexandria, Virginia has surprisingly few of these stand-bys from the American consumer landscape. And, as I noted with a similar shopping center a few weeks ago, Alexandria’s few auto-oriented commercial notes generally seem to thrive, with low vacancies, full and well-maintained parking lots, and mostly middle or upper-middle-income oriented tenants. I believe this is largely due in part to the unusually high concentration of population in Alexandria—much of the housing stock dates from the 19th century and is eminently walkable, while even the auto-oriented areas feature numerous multi-story apartment buildings. The income density is high; most people in Alexandria are well off. And, no doubt as an immediate consequence, the land values are far to the right of the bell curve as well—high enough that underperforming strip malls easily get transformed into better uses, such as more multifamily residential buildings, often with retail on the first floor.

These real estate conditions push everything upward and close together, leaving comparatively few strip malls (and their affiliated parking chasms) within the Alexandria city limits, and most of them look something like the Potomac Yard Center, in the far northeast corner of the city. 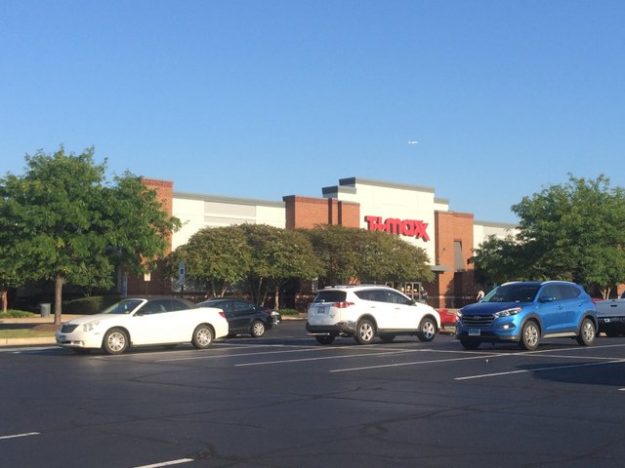 At the time of this post, this strip mall has enough anchor tenants to accommodate a regional market—not just folks living in Alexandria, but the next few towns over. Target, Staples, PetsMart, a new Michael’s, T.J. Maxx, Best Buy, Barnes & Noble, Pier 1. It’s probable that some car-owners in Washington DC take the bridge across the Potomac and do their weekend shopping here, since it’s the most accessible mega-center with a reliably large parking lot. 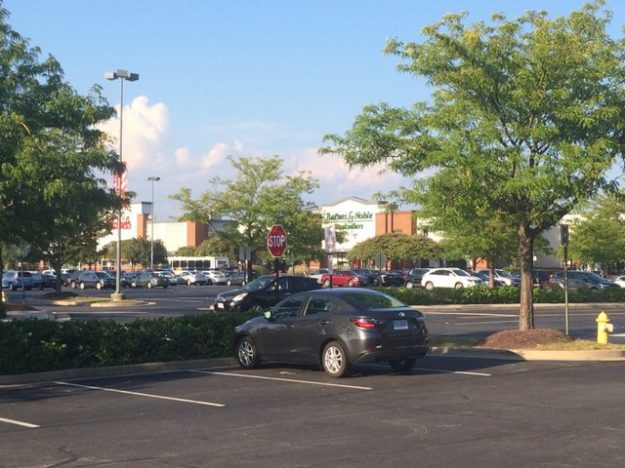 And, as indicated earlier, middle and high density residential continues to encroach on Potomac Yard Center. Look at what stands across busy U.S. Highway 1 from the scene in the above photos. Just a half mile to the north, in Arlington County, we encounter sizable residential developments with full-service grocery stores on the lower level.

Customary to the configuration of most strip malls, the row of big-box and category-killer chain remains considerably set back from the highway, with a huge parking lot in the foreground. And interspersed throughout the parking lot are multiple small outparcel buildings, like the one below: 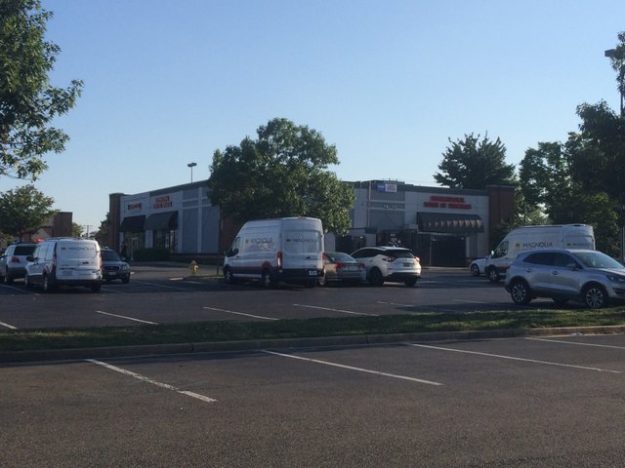 And this is where it gets interesting from the perspective of the restaurant industry. While the bulky row of big boxes in the background hosts mostly nationally known retailers of durable goods like the aforementioned (Michael’s, Target, Stables, etc.), the outparcels also feature primarily national names that require much smaller floorplates. And while this includes a Men’s Wearhouse, an AT&T, a credit union, and a barber shop, the majority of these outparcel tenants are restaurants: IHOP, Dunkin Donuts, Subway, Starbucks.

These outparcels might serve as a microcosm for niche-level transformations within the restaurant scene. Take this example: 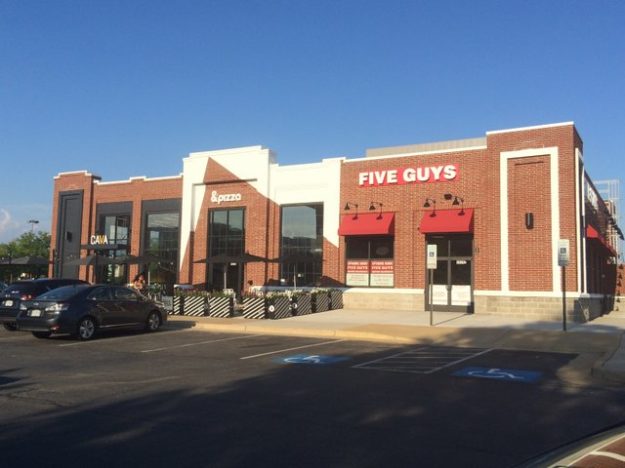 It’s an older building, newly tenanted. But it remained vacant for over a year—the one real lagging piece of real estate in all of Potomac Yard Center. Within the last two months, it has become fully tenanted. One of these brands is probably familiar. 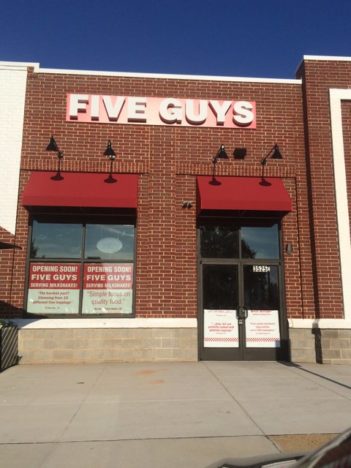 Five Guys (burgers and fries) has swept the nation in recent years, transforming how people regard America’s quintessential meal. In terms of pricing and the wait time, it falls squarely between McDonald’s and a more expensive restaurant with table service. Fundamentally, Five Guys is an archetype of the fast-casual restaurant, in which the consumer still orders at a counter and cash register, but then waits a reasonably short time (usually no more than ten minutes) for the food’s quick preparation. Usually either a runner delivers it to the table or a cashier calls the customer’s name. No dedicated wait staff, but the food isn’t ready-made, sitting under a heat lamp the way it would at McDonald’s or Wendy’s.

Five Guys is a DC original, founded in the region thirty years ago and, while serving a slightly more upmarket clientele than McDonald’s, it has proven a formidable competitor one of the country’s most enduring restaurant brands. The other two restaurants in this outparcel building— 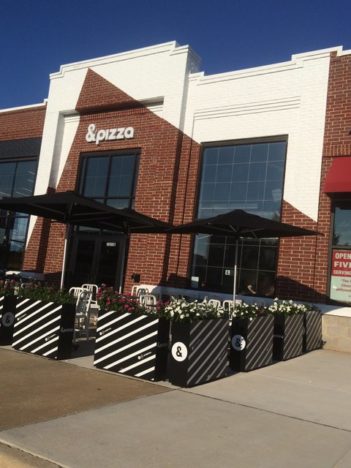 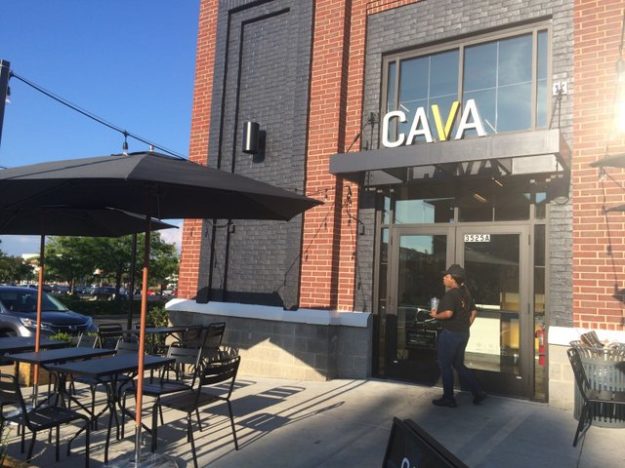 –follow the same standard: both are fast-casual and from the DC area. And while Cava and &pizza have enough locations to make them broadly familiar among Washingtonians, they have not expanded significantly outside the metro. What’s particularly interesting is that, within this unremarkable, long-vacant building, three restaurants have replaced a single predecessor: Don Pablo’s, a Mexican chain that peaked in the early 2000s with about 120 sites and is now reduced to just five locations—a restaurant that was not fast-casual but featured conventional table service.

These days, across the entirety of the expansive Potomac Yard Center, only one traditional sit-down restaurant remains within its own outparcel building: 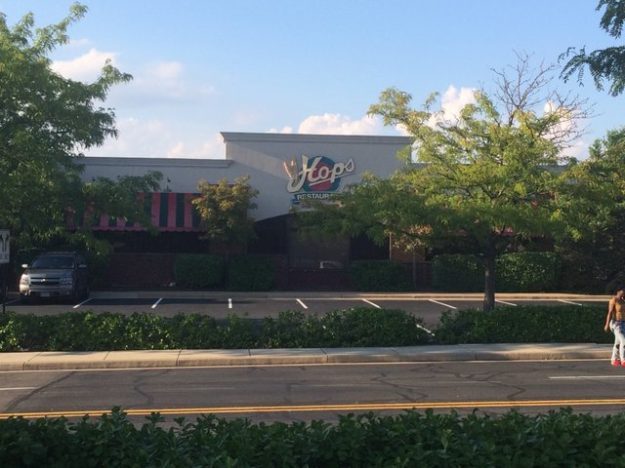 While Hops Grill and Brewery (what appears to be the last location of a chain that was never large) seems to boast a respectably full parking lot on weekend nights, it represents the last survivor of a fading business approach: one that expects customers to linger an hour or more to enjoy their meal. (The only other sit-down restaurant in this strip mall that I’m aware of is IHOP, but it shares its outparcel building with other tenants.) By no means am I suggesting that the conventional waiter-oriented restaurant is facing extinction, but I’m confident that most of these outparcels at Potomac Yard Center (constructed over 20 years ago) intended to accommodate larger restaurants with table service—not the fast-casual alternative, because, 20 years ago, fast-casual didn’t really exist at any large scale. The transformation of the single-tenant Mexican restaurant into a trio of fast-casual tenants is almost certainly a boon for the company that owns and manages this shopping center. If Hops Restaurant closes, I wouldn’t be surprised if the owner repurposes the building to accommodate a few more small outlets: maybe Nando’s Peri-Peri, Chopt Creative Salad Co, TaKorean, Honeygrow, or one of the other countless fast-casual chains with a strong DC presence. Maybe even Panera Bread, another chain ranking up there with Five Guys for its persistent success. (But not Chipotle: Potomac Yard Center’s already got one of those.)

Restaurants are a major contributor to Potomac Yard Center’s prosperity. After all, the fiscal fortunes of Barnes & Noble, Staples, Best Buy, and Men’s Wearhouse are murky at best, so it’s reasonable to question how much longer they’ll be around. In the meantime, such conventional sit-down chains as Applebee’s, TGI Friday’s, Ruby Tuesday—the sort of restaurants we’d expect to see at a place like Potomac Yard Center—are facing some of the same struggles as the national purveyors of clothing and electronics. The DC region in particular may experience an amplified strain on conventional table service in the wake of the ballot Initiative 77 from earlier this summer, in which residents of the District opted to replace conventional tip-based wages (a rate in DC of $3.33 an hour, well below federal minimum wage) with a significantly higher flat wage for all restaurant staff (up to $15 an hour by 2020). This initiative, not yet approved by District Council and without a clear plan for implementation, was highly contentious: unpopular with restaurant owners and especially wait staff, who routinely exceed $15 an hour in earnings through tips. But Initiative 77 was generally preferred among moderate-income DC residents and the back-of-the-house staff (cooks, bussers, runners). Profit margins in the restaurant biz are notoriously slim, and many in the District who opposed the initiative suspect that, if passed according to the electorate’s wishes, it will force many of the less capitalized restaurant owners to pursue one of three options: 1) raise food prices; 2) lay off many wait staff (those who don’t quit); or 3) close.

Needless to say, the DC ballot initiative will not affect Alexandria, and, if passed, it may make the District’s adjacent suburbs much more desirable for expansion or complete relocation. It’s also possible that the populist sentiment that favored Initiative 77 in DC will expand across the country, weakening cultural attitudes that have long favored the timeworn American tradition of tipping. If this happens, and owners have to hedge the future of their restaurants against a sudden spike in labor costs, fast-casual may continue to grow in popularity, eventually outpacing sit-down restaurant options.

By no means is fast-casual a surefire guarantor of success: within the last few weeks, one DC’s most established and successful fast-caz enterprises, Taylor Gourmet, announced it was closing after a decade in operation, with nearly two dozen locations. Taylor Gourmet’s eclectic hoagies faced increasing competition from other niche fast-casual concepts (Cava and &pizza among them), it may have expanded too much and too quickly (opening and closing a Chicago location within a year), and—most provocatively—many customers found a glitch in their loyalty smart phone app that they exploited quite legally, resulting in a potential loss of thousands of dollars for Taylor Gourmet. Regardless of what the future holds for these trendy restaurants in Potomac Yard Center, the future of hospitality is likely to morph quite rapidly in the years ahead, as technological advances continue to shape how we consume products. And by “consume”, I mean just about every possible definition of the word.

PrevAt the ballpark, a patch of the outfield gets left unmowed.
Mainline Protestant churches in small-town America: it’s time for a few more disciples.Next

19 thoughts on “Fast-casual dining advances on suburbia: is it the end of the era of Applebee’s?”