At the ballpark, a patch of the outfield gets left unmowed.

The transformation of Washington DC’s Navy Yard over the last fifteen years has been astonishing, and though I cannot account for it from firsthand experience, I don’t need to: a quick trip using the archive tool with Google Street View will show how much development has taken place since 2007, when Google first introduced the much-used but controversial photographic scoping capability. Even back then, much of the land surrounding the walled-in Washington Navy Yard consisted of parking lots, impound lots and underutilized or completely vacant old industrial buildings. And this was a few years into the widely planned redevelopment of the long-neglected area, a point in time when the two most prominent nodes of activity were either complete and fully occupied (in the case of the U.S. Department of Transportation headquarters) or under construction (in the case of the Washington Nationals Ballpark).

In 2018, the development frenzy continues at an unabated pace, to the point that, all on its own, the Navy Yard neighborhood boasts a larger number of construction than one can expect in all of greater Philadelphia, a metropolitan area of similar size. By some metrics, due to the high concentration of residential multifamily structures reaching the District of Columbia’s height limitations (usually around 13 stories), the Navy Yard has become the most densely populated neighborhood in the city. Its convenient location—within walking distance of the US Capitol, the expansive array of offices in L’Enfant Plaza of Southwest DC, the Navy Yard-Ballpark Metro Stop, Interstate 695, the two aforementioned activity nodes, and the Washington Navy Yard itself—have propelled land values to levels that would have seemed unthinkable as recently as 1995, when most of the land outside the walled Washington Navy Yard complex was desolate and dangerous.

Though never a cheap place to live, Washington DC has, in the last fifteen years, manifested some of the real estate conditions previously consigned to New York and San Francisco. Every parcel, no matter how tiny, gets developed to its highest and best use, within the constraints of zoning and height limitations. It’s clearly happening in Navy Yard. And yet, perhaps because land values are so high, it makes the attuned eye more prone to noticing some anomalies from the conventional maximization of FAR (floor-area ratio).

Here’s an example of one of these anomalies, which, at the ground level, reveals very little. 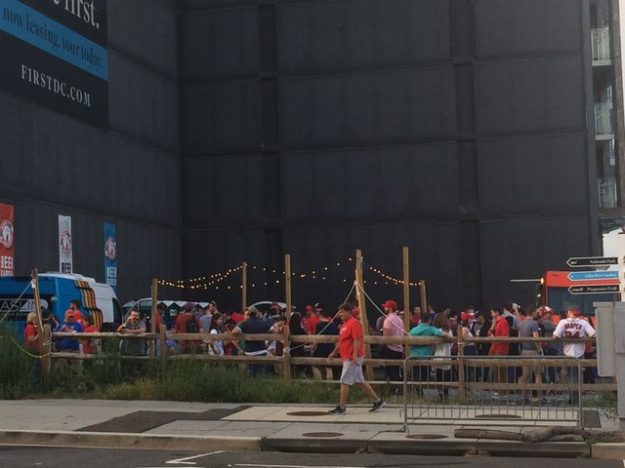 Looks like a little enclosed tailgating party, right? That’s more or less what it is; after all, Nationals Park is immediately across the street, and the first pitch for the Nats game would take place about an hour prior to snapping this pic. But check out those strange black walls on two sides. 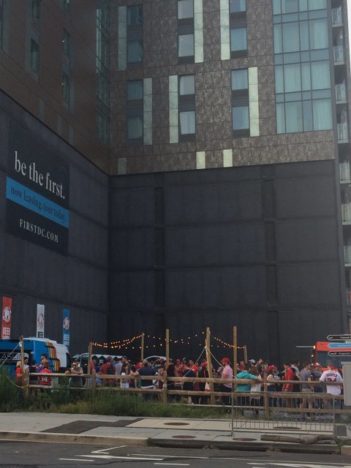 It’s essentially a sheath of some sort, but it covers a portion of the building’s façade that doesn’t fit in with the more ornamental configuration in those upper floors…the floors that actually feature windows. What’s going on? 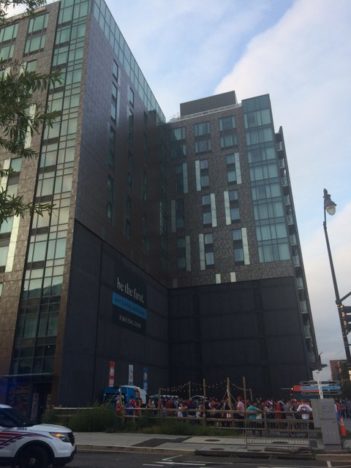 Seeing the entire building, it looks like the façade got stripped away for this one corner where the tailgating is taking place on an otherwise unused parking lot. We’re looking at the Hampton Inn and Suites for the Navy Yard, which broke ground in 2014 and opened to the public in early 2015. Perhaps another shorter building used to stand there at the corner, and then the hotel got constructed around it, understandably forgoing windows for the first five floors, since they abutted the old building. Then, after the developer completed the Hampton Inn, the owner of the corner parcel demo’d the building.

It seems like a reasonable explanation. But it’s wrong.

A quick trip down memory lane (courtesy of the archived photos from Google Street View) reveals that, back in 2009, long before the construction for Hampton Inn had begun, the entire block was nothing more than a vacant lot. So if ever a building stood on this parcel, its demolition preceded the construction of the Hampton Inn by a considerable margin. So why exclude this corner? A quick view of the overhead map shows, somewhat subtly, that the northwest corner of First Street SE and N Street SE does historically qualify as a discrete parcel, and it seems to have hosted two buildings at some point in time. 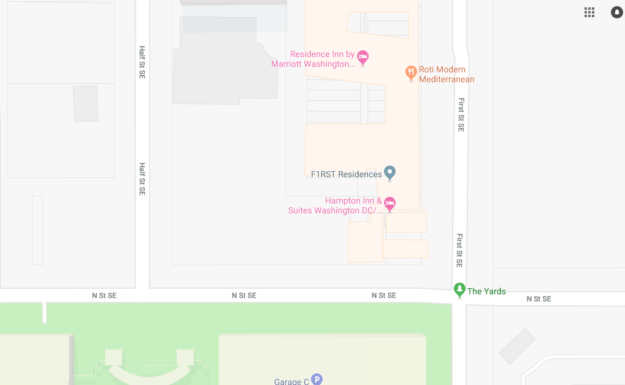 Now it features Aslin Beer Garden, which is a pop-up biergarten with food trucks that only claims the land during major ballgames. In other words, it’s the activity shown in the above photos.

So while it’s not clear that the developer of the Hampton Inn was constructing around another building, it still begs the question why, in a city with such high land values, would anyone want to avoid this corner parcel, which could easily host an even larger version of the Hampton Inn, pushed right out to the sidewalk? I have searched the web far and wide for some sort of explanation. Not finding anything, I can only make an honest guess. I think the corner parcel was originally part of the hotel development; somehow, the deal fell through. Take a look as this rendering from 2014: 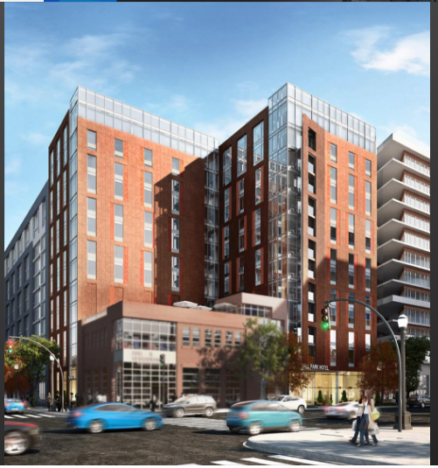 (My apologies for the low image quality. I tried to save the image as in the past, but it wouldn’t let me, so I could only use this screen shot; my apologies if the resolution is bad.) As we can see, the architect’s original intent was that corner would host a nearly non-contiguous building, architecturally inconsistent with the rest of the hotel, with copious windows and, I suspect, a significant retail/restaurant presence along the first floor.

So what happened? I chalk it up to a few possibilities:

Any combination of these conditions could have taken place, and if one of my readers has an explanation for exactly what happened at the Hampton Inn and Suites, I’m all ears. In the meantime, a little slice of prime real estate sits fallow, made all the more difficult to use because of the hotel’s fenestration along two sides. If anyone ultimately decides to build here, the presence of those windows will forcibly constrain him or her from building beyond five floors, precluding a maximization of profit. Such a phenomenon nearly took place in Midtown Manhattan, where the orientation of the neighboring buildings similarly constrained a lucrative corner parcel.

Land values and demand to build anew in the Navy Yard are great enough that something should happen. Then again, another desirable little downtown (Asheville, North Carolina) seems to be stuck with an unusable patch of land, carved out of a hotel on its main commercial corridor. Does the hotel industry know something about blank façades that the rest of us don’t?

PrevRensselaer rehabilitated: a promise of preservation in the unlikeliest of places.
Fast-casual dining advances on suburbia: is it the end of the era of Applebee’s?Next

8 thoughts on “At the ballpark, a patch of the outfield gets left unmowed.”