Keeping the peace in Paulsboro.

While we’ve all seen “crime watch” or “neighborhood watch” placards upon entering a residential area, I couldn’t help but be a bit alarmed by the sign I saw as I swerved onto a local road in Paulsboro, New Jersey. 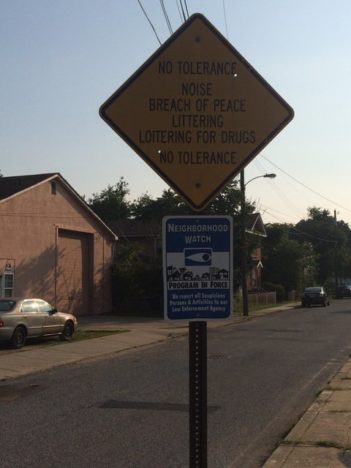 Needless to say, it’s the upper of these two signs that merits consideration. Not only because of the content (saying “NO TOLERANCE” twice) but the standard symbology embedded in the yellow diamond, a shape and color standardized through the Manual on Uniform Traffic Control Devices (MUTCD) to represent an upcoming warning, usually in relation to an upcoming potential change in road conditions that could pose a hazard to motorists. The potential change could involve an intrinsic physical feature (sharp curve, narrow bridge, slippery when wet) or to signal a higher level of awareness because of vulnerable living things nearby (duck crossing, blind/deaf child).

But it’s not every day that the sign itself is an outright threat to the person approaching. I can’t think of where I’ve ever seen such a thing. But I suppose Paulsboro is a bit atypical on its own terms. 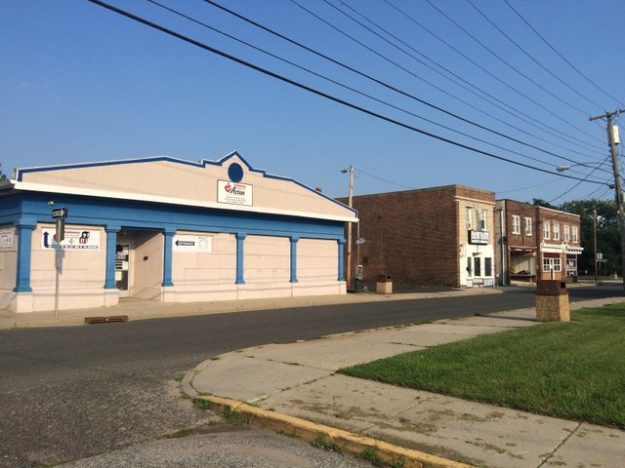 The above photo is little more than a pivot about 180 degrees from the warning sign. And it shows a standard block along Delaware Street, Paulsboro’s main street. And at this point, it probably goes without saying that Paulsboro, directly across the Delaware River from the Philadelphia International Airport (PHL), is not among New Jersey’s most flourishing communities. A Google Street View trip along Delaware Street suggests a commercial corridor pockmarked with surface parking lots and bare grass where other buildings once stood.

To be fair, Paulsboro is not the most distressed New Jersey town in the area: that award unequivocally goes to Camden, the devastated factory town directly across from center city Philadelphia. Paulsboro, consisting primarily of single-family detached housing, seems to suffer comparatively little vacancy, despite decades that have resulted in an over 25% population loss since its 1960 peak of over 8,100. In a state with housing costs significantly above the national median, Paulsboro may in fact serve as a reprieve: the blue collar town offers cheaper housing than most neighboring suburbs, helping it stave off further decline because it’s a beacon for moderate-income prospective homebuyers.

But a sign indicating so little tolerance for noise, breaching the piece, littering, loitering for drugs, et cetera et cetera…it conveys both a firm stance on crime and a confession that Paulsboro needs a firm stance on crime. If it wasn’t obvious that Paulsboro has been through economic challenges—and to most people it’s very clear (though less obvious than Camden)—this sign along the fractured main street is tantamount to a confession. I wonder if it achieves the desired effect, or if the more innocuous and more commonplace “Neighborhood Watch” sign below it might offer the same message but with a more neutral tone. As New Jersey continues to grapple with its housing affordability concerns, it will be interesting to see if this Philly suburb—conveniently situated, except perhaps in terms of the noise from airplanes—will turn itself around through its stern promotion of a safe environment…or if these same peremptory approach will scare people away.

PrevIf you can’t remove the room with a view, build anew.
Skid Row in Delaware: if it can claim The First State, it can claim them all.Next

2 thoughts on “Keeping the peace in Paulsboro.”